Jessica Rowe narrowly avoided disaster on Thursday when she and her daughter Allegra escaped their burning car moments before it exploded on the school run.

And the ‘traumatised’ TV host has now refused to answer a question about how close they both came to dying, telling The Kyle and Jackie O Show on Friday: ‘We’re not going down that path.’

When asked what would’ve happened if a Good Samaritan bus driver hadn’t alerted her to the smoke coming out of her $66,000 Volvo XC 60, Jessica couldn’t bring herself to say.

‘We’re not going down that path’: Jessica Rowe has refused to answer a question about how close she and her daughter Allegra came to dying in a horror car explosion on Thursday

Radio host Kyle Sandilands said: ‘If he [Mev the bus driver] didn’t get you out of the car, could it have been way worse? How long between you getting dragged out of the car and the thing blowing up? How long?’

Jessica, who was speaking to the radio show via telephone, hesitated for a moment and was then interrupted by Allegra, 14, who told her she needed to go to school. 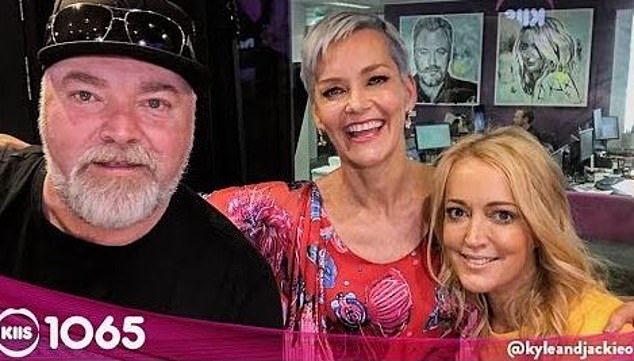 Ordeal: When radio host Kyle Sandilands (left) asked what would’ve happened if a Good Samaritan bus driver hadn’t alerted her to the smoke coming out of her $66,000 Volvo XC 60, Jessica (centre) couldn’t bring herself to say. Pictured with Jackie ‘O’ Henderson

Kyle interrupted: ‘What, the bus driver won’t wait now after the rescue yesterday?’

He added: ‘So you could have burned to death. End of story!’

‘No, we’re not going down that path,’ Jessica replied. ‘The thing is, you know what – yes, I’m coming! – it could have been worse, but it wasn’t thanks to Mev.’

Kyle and his co-host Jackie ‘O’ Henderson then let Jessica end the interview so she could see Allegra off to school.

Sofia Vergara, Ciara, Bethenny Frankel and Joe Jonas get vaccinated over the weekend

The former Studio 10 host was picking up her eldest daughter from school in Sydney’s eastern suburbs on Thursday afternoon when her black Volvo XC 60 began billowing smoke on New South Head Road in Rose Bay.