Addison Rae was spotted leaving a hotel in West Hollywood on Thursday afternoon.

The TikTok star appeared to be having a great day as she exited the building’s lobby and crossed a city street while taking a phone call.

The 20-year-old social media personality’s outing comes just a day after her former boyfriend and fellow TikTok star Bryce Hall confirmed that the two had broken up in a video posted to his YouTube account – not that you could tell from Rae’s sunny disposition.

Getting over it: TikTok star Addison Rae was spotted leaving a hotel in West Hollywood on Thursday afternoon, not long after her split from Bryce Hall was confirmed

Rae cut a very casual figure during her time in public as she wore a sizable light beige sweater that bunched up just above her wrists.

She contrasted her lighter top with a pair of black leggings and tied off her outfit with a pair of white Nike Air Force One sneakers; she also carried a small black handbag with her to store her belongings.

The influencer’s beautiful dyed blonde hair cascaded onto her shoulders and the nape of her neck while stepping out.

Rae was seen wearing a white facial covering to keep herself protected from COVID-19. 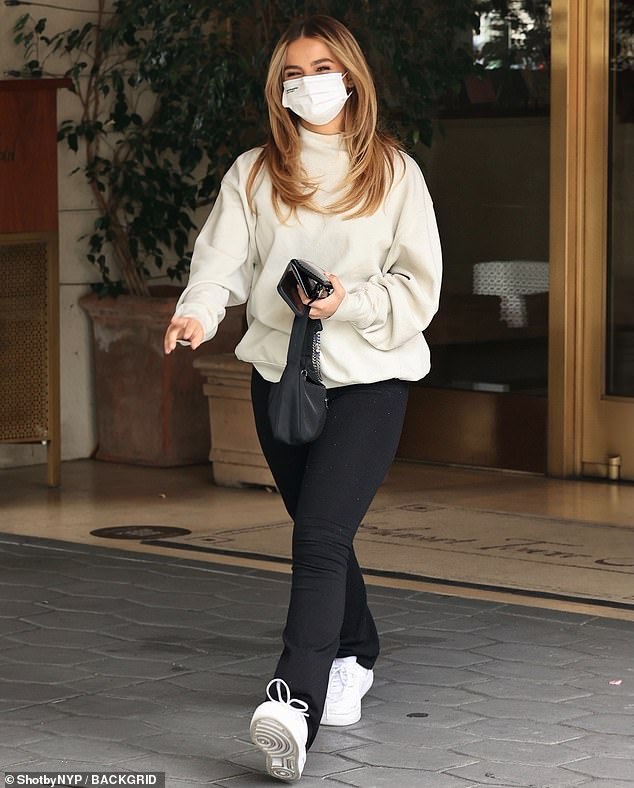 Dressed for success: The social media personality wore a slightly oversized beige sweater and a pair of black leggings, as well as a pair of Nike Air Force Ones 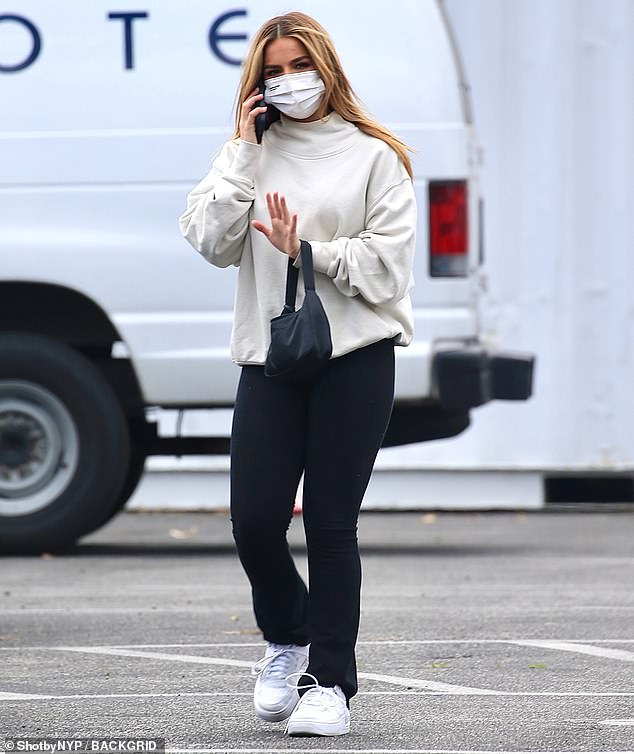 Staying safe: The TikTok personality wore a white facial covering to keep herself protected from COVID-19 while spending time in public

Although the social media personality appeared to be enjoying her walk, she is currently dealing with a public breakup from her former boyfriend, Bryce Hall.

The two first sparked dating rumors in late 2019 when they began appearing in each other’s content and photos on various social media outlets.

Rumors of a relationship between the two soon arose, but the 21-year-old internet personality denied that he was in a relationship in a post made to his Twitter account in January of last year.

Over the course of 2020, however, the former couple engaged on an on-again-off-again relationship, with the pair being seen together often, although they frequently tweeted that they were both single. 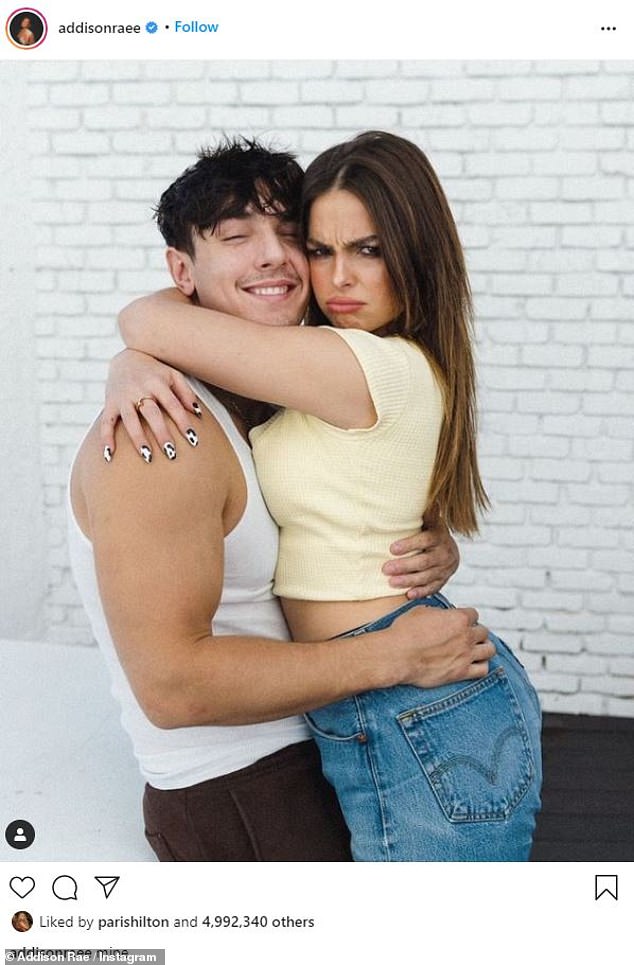 Former flames: Rae and Hall began appearing in each other’s content in late 2019 and engaged in an on-again-off-again relationship over much of 2020

From September to October of last year, the TikTok stars began posting photos with each other to their respective Instagram accounts, one of which showed them dressed as The Joker and Harley Quinn.

Last November, the former couple went public with their relationship in a video posted to Rae’s YouTube account, during which Hall mentioned that he had officially asked his now ex-girlfriend on a date the month prior.

Although the two were often spotted going to dinner and heading to the gym together, breakup rumors began to swirl last month when it was alleged that Rae’s former partner had cheated on her during a trip to Las Vegas.

The two began to keep their distance from each other at the beginning of this month, with the Obsessed singer making cryptic tweets hinting at a breakup.

Speculation about the two continued until earlier this week, when an insider spoke to E! News and confirmed that their relationship was over, commenting that they were both ‘very busy concentrating on their careers.’

Leaving hints: Earlier this month, the two began making cryptic tweets intimating that their relationship had finally reached its end 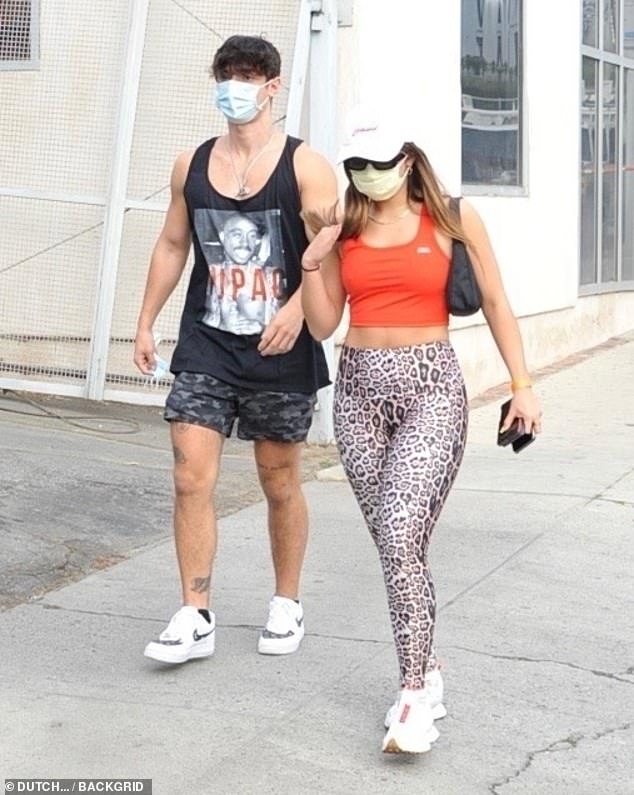 Doing their own thing: An insider confirmed that the two had officially split up and noted that they were both ‘very busy concentrating on their careers’; the former couple is seen stepping out together in November of last year

Yesterday, Hall uploaded a video to his YouTube account to make his feelings about the end of the relationship publicly known.

During the video, the Sway House member expressed that much of what has been publicly said about his former relationship was untrue and that the specific reasons behind their separation were ‘our private business.’

He went on to address the allegations of cheating and denied that he had ever been unfaithful to his ex-girlfriend while also noting that they had been broken up since February.

Hall also expressed that he had been experiencing stress over the entire situation playing out in the public eye, stating, ‘We’re so young…the fact that a 21-year-old has to address a breakup in front of all of you guys is just ridiculous to me.’

The TikTok star finished the video by remarking that he wished Rae ‘the best’ before walking out of the camera’s view. Making it known: Yesterday, Hall uploaded a video to his YouTube account to make his feelings about the breakup known and expressed that he felt that having his separation play out in the public eye was ‘ridiculous’