She shared with her Instagram followers that she had gotten a dose of one of the coronavirus vaccines late last month.

But Selma Blair was still playing it safe on Saturday when she and her boyfriend Ron Carlson masked up for a stop at Alfred Coffee in Los Angeles.

The 48-year-old Cruel Intentions star looked vivacious in a high-waisted set of acid-wash cut-off jeans that showcased her legs.

Coffee run: Selma Blair, 48, showed off her legs in cut-off jeans while grabbing a pick-me-up from Alfred Coffee in Los Angeles on Saturday with her boyfriend Ron Carlson

Selma also had on a vibrant yellow patterned top tucked into her pants.

She covered up against the breeze with a powder blue cardigan with the sleeves rolled up, and she covered up her chic pixie cut with a cream-colored wide-brimmed hat.

The 5ft3in actress rounded out her casual ensemble with sleek white loafers and a white bag slung over her shoulder that was decorated with peach-colored floral designs.

Selma had her arm affectionately locked with her boyfriend Ron, who rocked double denim with a dark button-up shirt and lighter jeans. 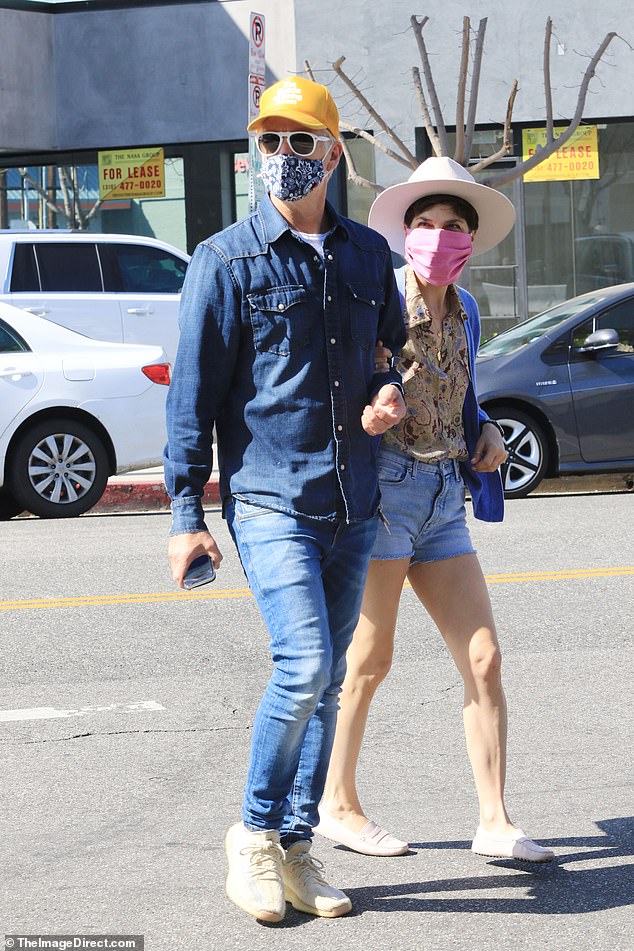 Cute couple: She added a tan patterned shirt to her ensemble and covered up with a powder blue cardigan while wearing a wide-brimmed hat over her short hair. Ron looked rugged in double denim

He covered up his salt-and-pepper hair with a bright yellow trucker hat and wore pale yellow Yeezy trainers and a navy blue paisley mask.

Selma, who was diagnosed with multiple sclerosis in 2018, often steps out with a cane now, but she affectionately locked her arm with Ron’s for support while they were out and about.

Last month, she posted a playful photo of herself enjoying a day at the beach with Carlson.

She pretended to be naked by covering up her skimpy outfit with an extra-large straw hate while Carlson stood fully clothed next to her.

Late last month, Selma revealed to her 2.4 million Instagram followers that she had gotten a dose of one of the coronavirus vaccines.

She shared a clip of herself looking stylish in a black-and-white gingham sweater to show just how quick the jab was.

The actress was at particular risk from a Covid-19 infection due to her MS, so getting the vaccine was particularly important for her. 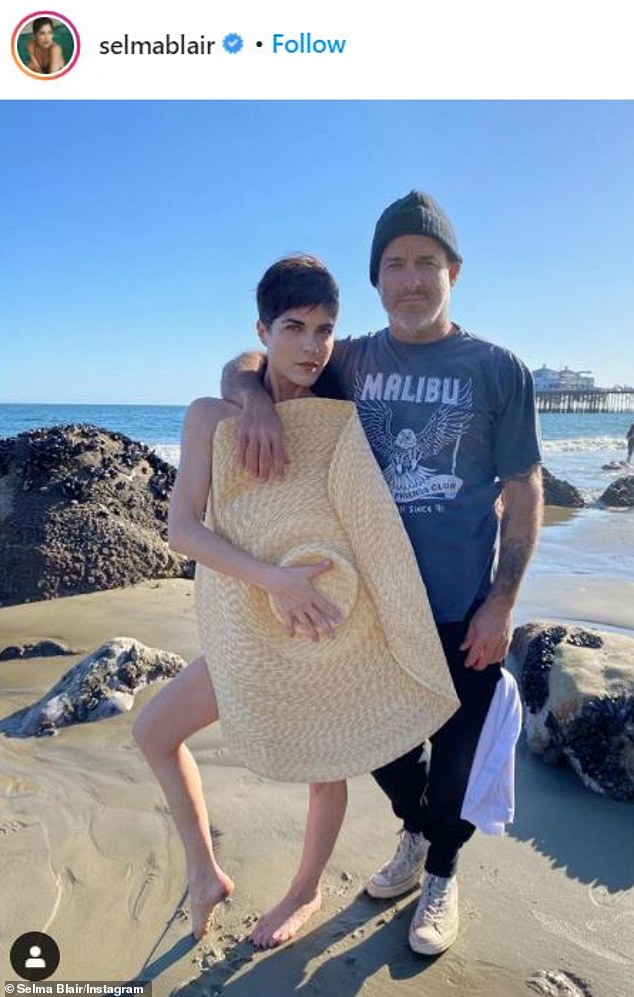 Cheeky: Earlier this month, she had posted a cheeky photo of herself on the beach with Carlson in which she pretended to be naked thanks to an oversize hat 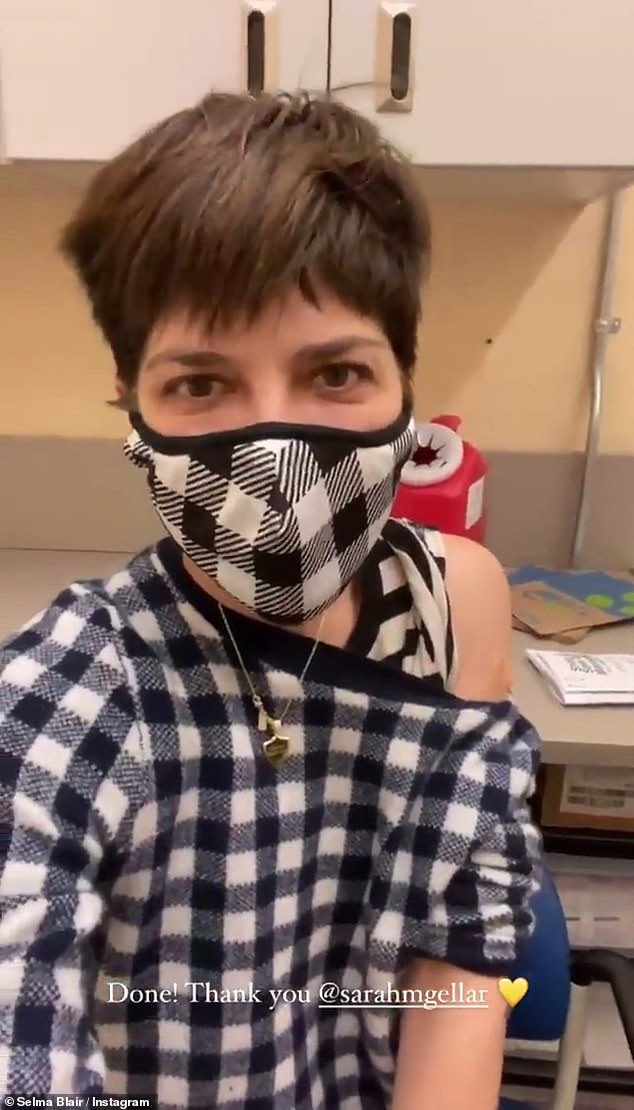 Protected: Late last month, Selma revealed to her 2.4 million Instagram followers that she had gotten a dose of one of the coronavirus vaccines, which was essential due to her MS diagnosis

Earlier this year, the actress confessed that she first noticed numbness in her leg in February 2018, while walking in her friend Christian Siriano’s fashion show.

‘I walked that day. In the show. Noticing for first time, my leg was numb. When I first stepped out. I couldn’t feel the ground or how to lift my left leg. My brain was trying to compute. As I walked the runway, stunned,’ she shared on Instagram.

After doctors determined she had MS, she initially started with the least-aggressive treatments available.

But after those failed to make meaningful changes she felt as if she was ‘out of options, so she turned to a round of chemotherapy and stem cell treatments.

The Hellboy actress made her debut with her cane in 2019 when she attended the high-profile Vanity Fair Oscars Party, and she has been unafraid to carry it with her ever since. 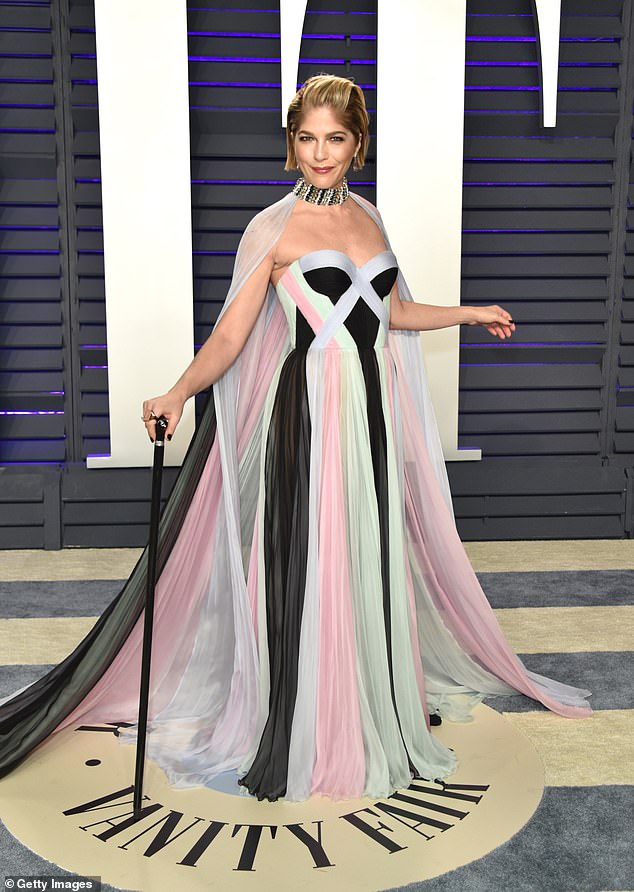 Not hiding herself: Selma first noticed the symptoms of MS in 2018, and she made her public debut with her cane in 2019 at the Vanity Fair Oscars Party