Brooklyn Beckham was reunited with his family for Easter Sunday, as he and fiancée Nicola Peltz celebrated the occasion with them in Miami.

His mum Victoria Beckham, 46, took to Instagram to share a snap of herself posing with husband David, 45, and all four of her offspring, including eldest Brooklyn, 22.

Captioning the heartwarming snap, the star wrote: ‘Our family together is the most precious gift this Easter x We have missed you and love you both so much.’

Brooklyn Beckham, left, was reunited with his parents David and Victoria Beckham and siblings Romeo,

She added in another caption: Happy Easter from the Beckham’s x We love you so much @nicolaannepeltz nice picture!’

Brooklyn and Nicola, who are known for their public romantic displays, arrived at the family celebrations wearing matching bunny ears as they posed together.

Captioning his own snap of himself with American actress Nicola, 26, he gushed of his bride-to-be: ‘The cutest Easter bunny ❤️.’ 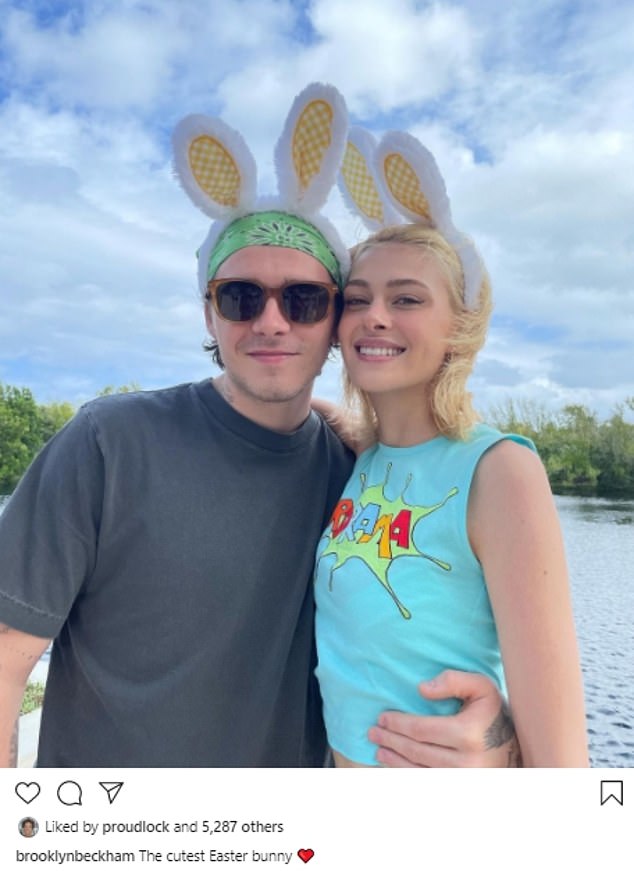 Also seen in the snap were Victoria and David’s other sons Romeo, 18, and Cruz, 16, as they posed together at a waterfront setting.

Brooklyn and Nicola are often seen spending time together in Los Angeles and New York City, as they begin building their life together ahead of their wedding.

The rest of the Beckham gang have been staying in Florida, where they’ve been since late last year as David works with his soccer team in Miami.

It comes after Victoria was treated to a host of luxury treats for Easter, when her future daughter-in-law gifted her a hamper packed with £500 of products. 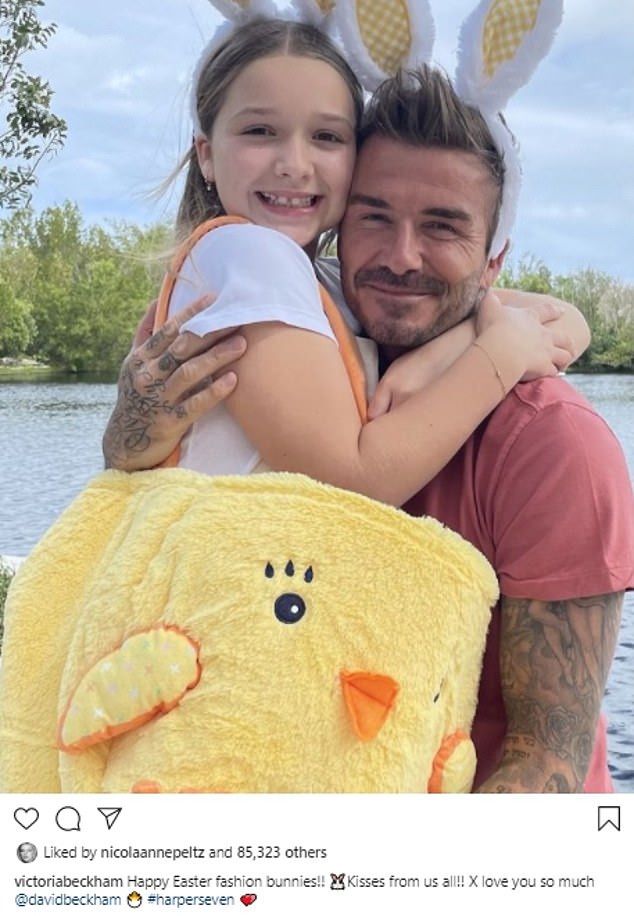 The singer-turned-designer took to her Instagram Stories over the weekend to share a sneak peek at the package of designer merchandise and chocolates, which included Dior makeup, Chanel hand moisturiser and Apple AirPods.

‘Beauty blenders shaped as eggs, chocolate, my goodness – so much amazing stuff! Makeup, there’s some Chanel… this is incredible.

‘Thank you so much Claudia and Nelson for thinking of us. Wow, this is a pretty amazing Easter basket. Happy Easter.’

Even Victoria’s youngest offspring, nine-year-old daughter Harper, appeared to be impressed with the gesture, as she branded the gift ‘amazing’.

Captioning her post, mother-of-four Victoria wrote: ‘This Easter basket is everything!!! Thank you Peltz family!! We love you all!!!’

Victoria also used the occasion to share a throwback of herself with her sister Louise and brother Christian as young children posing with a sizeable stack of Easter eggs.

She mentioned her mother Jackie as she wrote: Happy Easter!! Don’t think you got us enough Easter eggs @jackie.adams_ kisses @louisesadams @christianadams_79 xx.’ 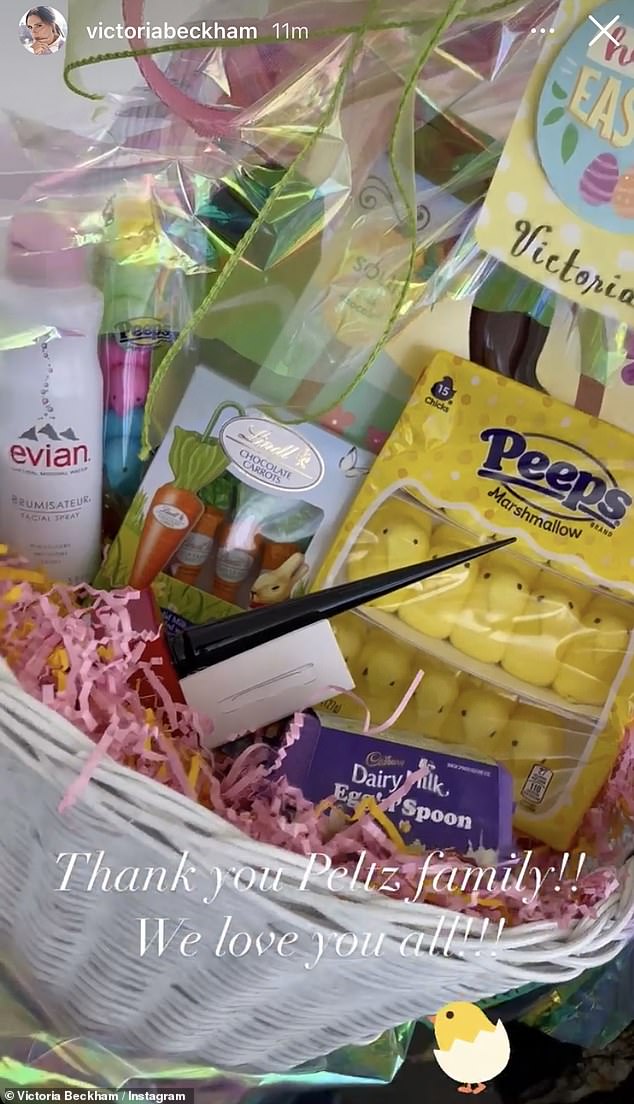 Goodies: Singer-turned-designer Vuctoria, 46, took to her Instagram Stories over the weekend to share a sneak peek at the package of goodies she’d received from Nicola’s family 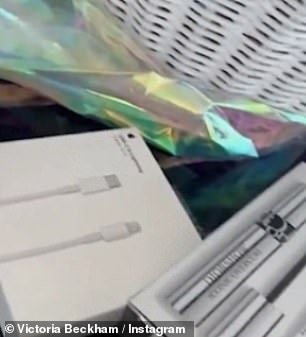 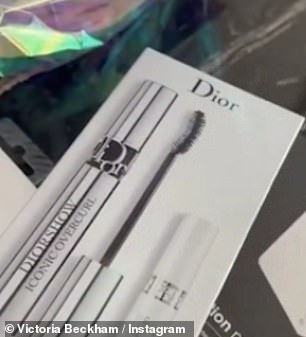 Last week, Victoria shared a sweet snap of her youngest child’s handwritten note, where she called her mother her ‘best friend’.

The fashion designer took to her Instagram Stories to post the gushing tribute from Harper with her followers on Tuesday.

Harper sweetly penned: ‘Dear mummy I love you soooo much, you are my best best friend and you are such a good mummy. We all love you xoxoxoxo I love you’.

She decorated the orange paper with neatly drawn love hearts and flowers, and Victoria displayed it on a crisp white background.

Victoria captioned the snap, which she shared with her 28.8million followers: ‘I love you so much Harper Seven X’. 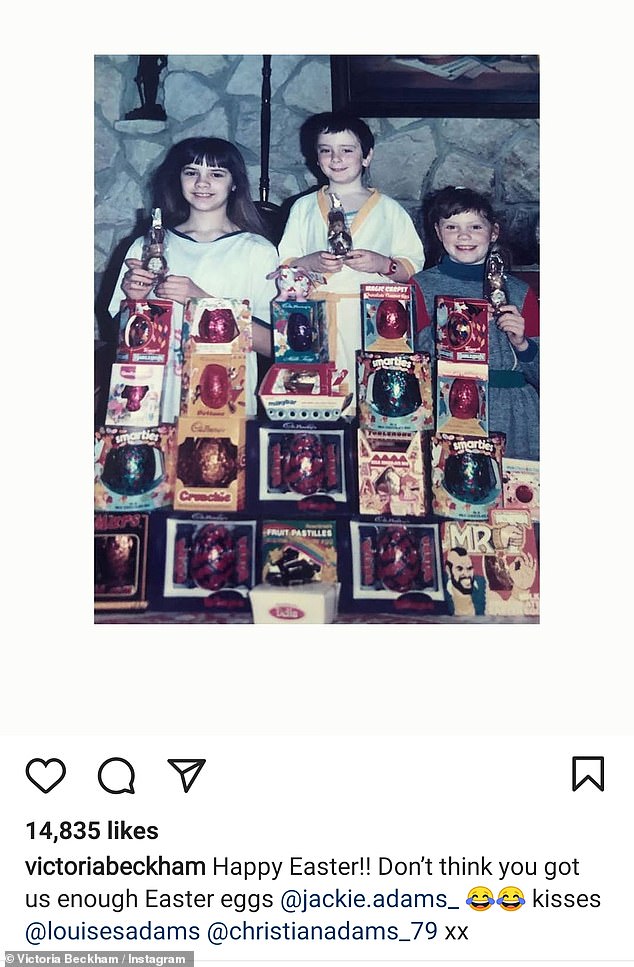 Throwback: Victoria also used the occasion to share a throwback of herself with her sister Louise and brother Christian as young children posing with a sizeable stack of Easter eggs

YOU GOT IT Lyrics – VEDO

Here’s THE LOOKS From The Atlanta Housewives REUNION – Who Looked BEST??