By Lydia Spencer-elliott For Mailonline

She recently revealed she hid her toned post-baby body because she ‘didn’t want anyone else to feel bad’.

And Vogue Williams turned heads as she left Global Studios in London after her Heart FM show on Sunday.

The Irish star, 34, smiled in the sunshine as she strolled home in a leopard print maxi dress and large gold hoop earrings.

The presenter looked happy as she strutted along the street in the statement dress and black military boots.

She accessorised with a large shopper bag and a pair of glamorous black sunglasses.

Her caramel tresses were pulled back into an effortlessly chic ponytail, which left her large gold hoop earrings on display.

Vogue completed the outfit with a cute silver heart charm necklace and a slick of clear lipgloss. 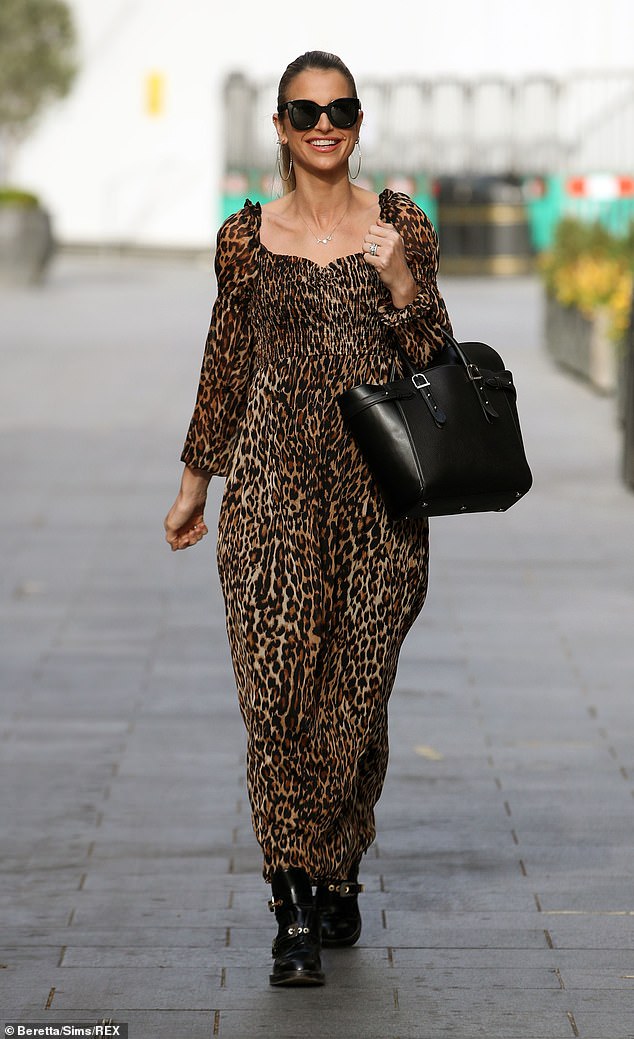 Sunshine smiles: The presenter looked happy as she strutted along the street in the statement dress and black military boots

The outing comes after Vogue explained that she ‘didn’t want to make anyone else feel bad’ about how she’d lost the weight following the birth of her second child.

Speaking to The Sun, the mother-of-two said: ‘There is so much pressure put on women about this and I didn’t want to add to that when, instead of worrying about losing the baby weight, we should be worrying about where our pelvic floor is at and how our mental health is doing.

‘It’s purely down to my body type that I went back to how I was before without too much effort, and I did find myself trying to hide that for the first few months. 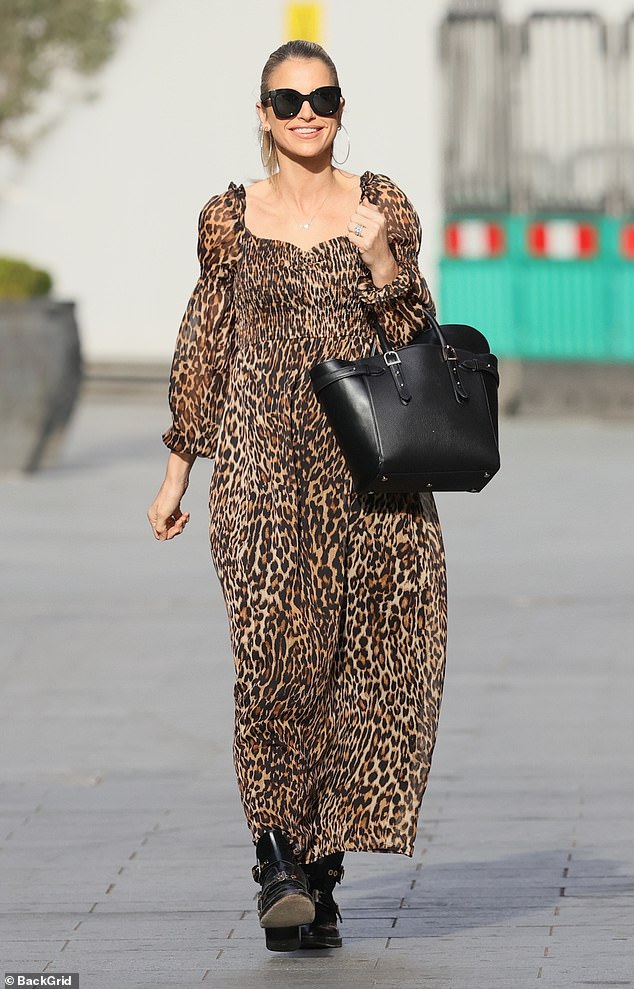 Stylish: She accessorised with a large shopper, a pair of glamorous black sunglasses and completed the outfit with a cute heart charm silver necklace

‘I just didn’t want to make anyone else feel bad by being all, “hey, look at me after having a baby,” because the last thing anyone wants to see is someone who’s lost the weight quicker than you.’

Vogue added that it’s impossible to win online as people will always comment on posts, whether it’s saying she lost weight fast or carried the baby weight.

Elsewhere in her interview, the doting mum-of-two chatted about how she’s finding motherhood with her second child, admitting that she’s more laid-back with Gigi. 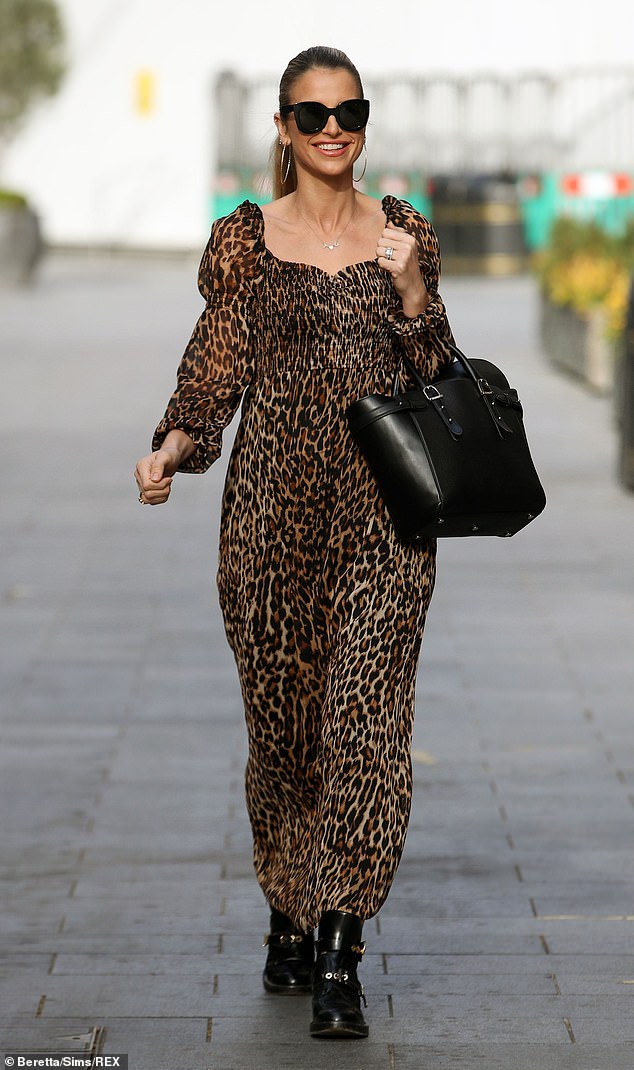 Flawless: Her caramel tresses were pulled back into an effortlessly chic ponytail with her large gold hoop earrings on display

Vogue, who also revealed she and Spencer would like ‘definitely four’ children, praised her daughter saying the tot is very easy going and happily settles herself.

Although loving life with her new addition, Vogue said it has been hard at times having to see family members miss out on Gigi’s first year because of the pandemic.

Careful to emphasise that other families have it ‘much worse’, the Irish star explained that her brother has never seen his niece and her mum has only met Gigi once. 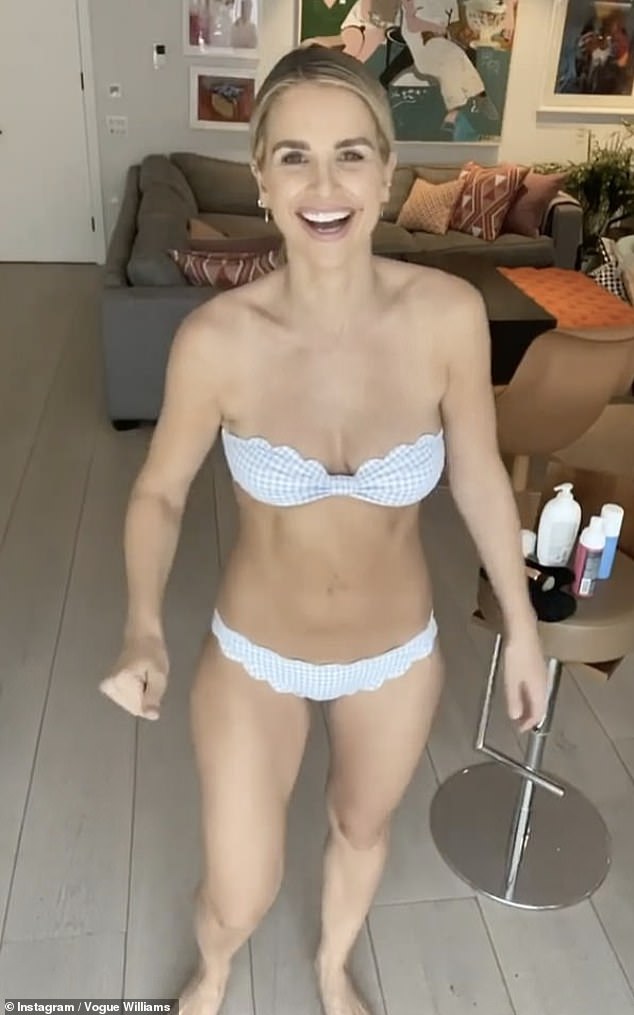 ‘I didn’t want to make anyone else feel bad’: The outing comes after Vogue Williams revealed she hid her toned post-baby body (pictured six weeks after giving birth)

Vogue, who controversially jetted to St Barts with her brood in December, added that she’s not been home to Ireland in more than a year with many people there still waiting to meet her daughter.

Turning her attentions to lockdown, Vogue said the third lot of UK restrictions have been the toughest for her as it felt never-ending at times.

She also revealed that she went back to therapy as her anxiety was ‘pretty bad’ and has been taking some medication to help. 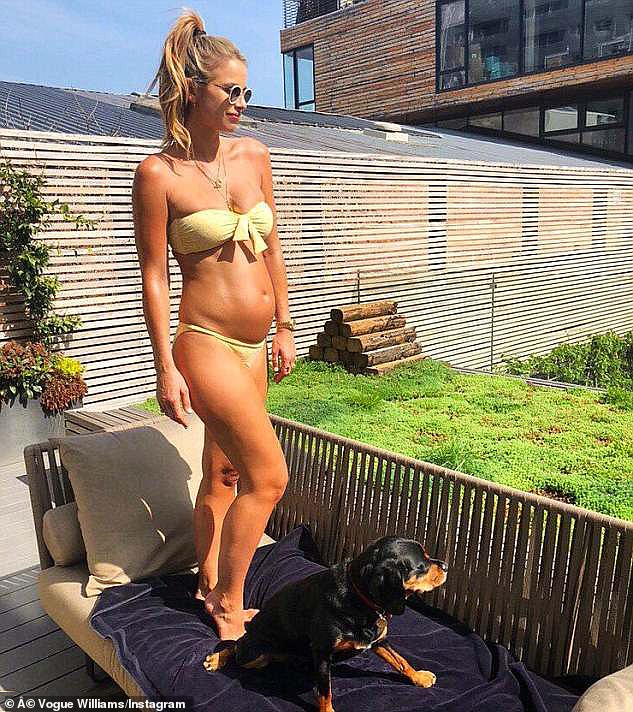 ‘There is so much pressure put on women’: The star explained how she only bounced back from her pregnancies because of her body type