They first met on the winter Love Island and went on to win the show in 2020.

And Paige Turley and Finley Tapp looked more loved-up than ever as they hit the town with co-stars Molly Smith and Callum Jones.

Scottish beauty Paige, 23, stepped out with her beau, 21, in Manchester on Saturday night with fellow couple Molly, 25, and Callum, 24.

Smitten: Paige Turley and Finley Tapp looked more loved-up than ever as they hit the town with co-stars Molly Smith and Callum Jones

Sporting a pair of chic cream wide-legged trousers, Paige looked as glamorous as ever as she paired it with a cropped black blazer.

She added height to her frame with a pair of pointed perspex heels while totting a mini Dior handbag, her phone and a protective mask in her hand.

The reality star turned up the glam with a full face of make-up and styled her luscious blonde locks in loose curls. 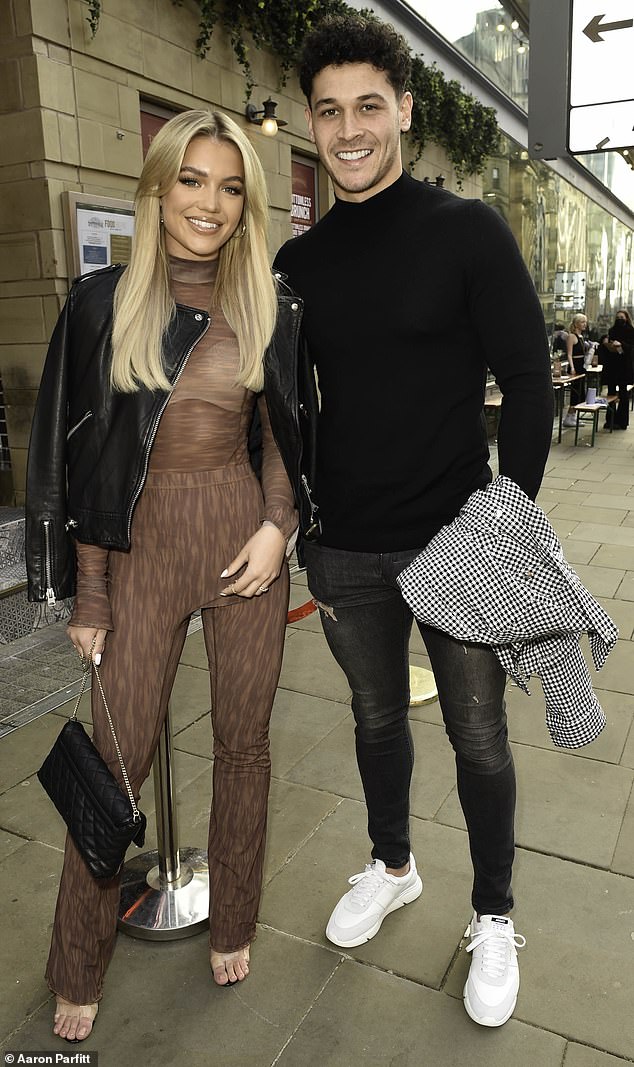 Loved up: Molly Smith, 25, and Callum Jones, 24, joined Paige and Finn and also put on a glamorous display as they stepped out in Manchester on Saturday night

Finn, meanwhile, looked typically suave in an all-black ensemble which he paired with some white Dior trainers.

He wore his dark hair in a quiff hairstyle as he flashed a smile while heading out with his love.

They were joined by Molly and Callum who also looked stylish as they cosied together in the snaps.

Model Molly rocked figure-hugging brown patterned trousers and a matching mesh top which showed off her bra as she stepped out.

Beauty: Sporting a pair of chic cream wide-legged trousers, Paige looked as stunning as ever as she paired it with a cropped black blazer

The TV star paired her look with some clear heeled sandals and draped a leather jacket over her shoulders which matched her black purse.

She sported a full face of make-up which drew attention to her beauty and wore her golden tresses in sleek lines.

Callum donned a tight black long-sleeved top and styled it with a pair of matching black jeans.

He opted to carry his monochrome checked jacket over his arm and completed his look with a pair of crisp white trainers. 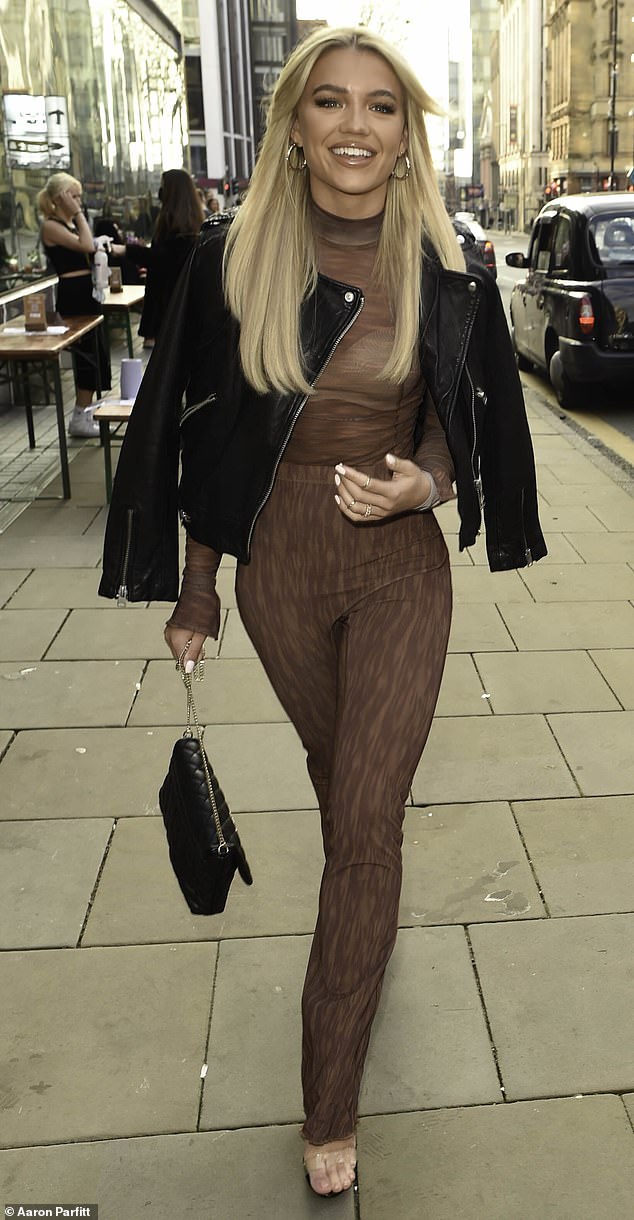 Stunning: Model Molly rocked figure-hugging brown patterned trousers and a matching mesh top which showed off her bra as she stepped out

The Love Island quartet appeared to be in great spirits as they beamed for the camera on their way to Impossible bar.

Love Island will return to Majorca this year, with bosses even arranging for extra cast to fly out in May and quarantine like the main set of singletons as a Covid precaution, reports The Sun.

Although usually filmed in a villa near Sant Llorenç des Cardassar on the Spanish isle, UK locations including Jersey, Cornwall and Devon had been tipped for 2021.

A source told the publication: ‘All precautions have been taken to make sure it goes smoothly. Besides the extra cast, they’ve incorporated Covid safety measures and increased checks on contestants’ mental health.

‘Everyone is very excited. Restrictions are easing, the Euros football is on and Love Island is back in Majorca. What more could you want?’ 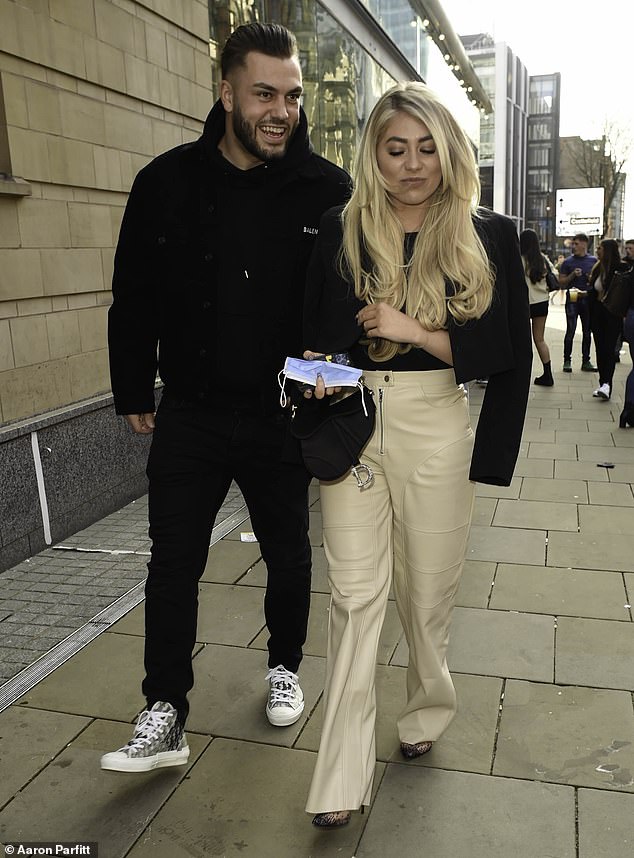 All smiles: The couple both sported Dior accessories, with Paige clutching a black mini bag and Finn sporting hightop trainers by the fashion brand

The launch date of Love Island 2021 has been delayed by three weeks due to overseas travel restrictions as ITV confirm they plan to base the show in Majorca.

The 2019 season started on June 3 but this year the crew will not fly out to the Spanish Island until the end of the month – with ITV intending to air the popular dating show for a duration of eight weeks.

The summer series of Love Island 2020 was cancelled after production found it ‘logistically impossible’ to organise the show as the pandemic raged on.

Paige and Finley won the first winter Love Island series in 2020, weeks before the UK was plunged into national lockdown.

The show, presented by Laura Whitmore, 35, wasn’t as successful ratings-wise after the launch episode attracted 800,000 fewer viewers than the 2019 summer series. 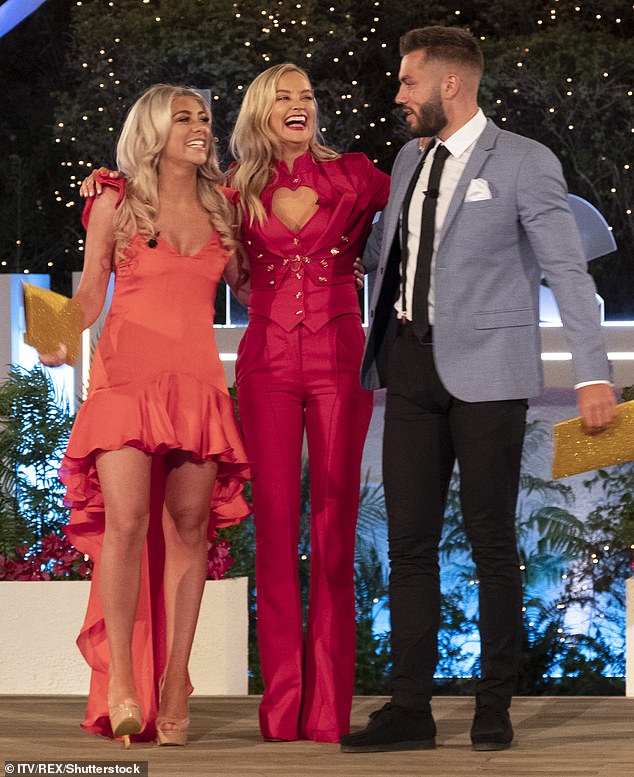 First and last: Paige and Finley (pictured in 2020) won the first winter Love Island series last year, weeks before the UK was plunged into national lockdown