She’s been at the centre of some very dramatic moments during the sixth series of Line Of Duty, which is set to reach its undoubtably dramatic climax on Sunday.

And while not filming scenes to shock the nation as her character Kate Fleming, actress Vicky McClure spends time at the cosy Nottingham home which she shares with fiancé Jonny Owen, 49.

The actress, 37, has posted several glimpses into their abode over the years, revealing that she likes to relax on a high-tech leather sofa, which boasts a built-in charging port, and lark around in their spacious garden.

Home: Vicky McClure has shared several glimpses into the cosy Nottingham home which she shares with fiancé Jonny Owen over the years (pictured with her beau after returning to their abode following Line Of Duty filming in November)

Vicky and Jonny updated their living room set-up last November when they were gifted an Italian leather corner sofa from his cousin’s Welsh interiors company Galieri.

In a beaming snap shared to Instagram to mark the occasion, Vicky was seen looking very pleased with the new addition to her home while leaning on one arm with her legs resting across her beau.

She also made the most of the couch’s built-in charging point as she plugged in her phone – a feature which must have come in handy on recent Sunday nights after her Line Of Duty character’s storylines sparked a furore online.

The star also revealed that she and Jonny were planning to donate their previous sofa to charity Womens Aid. 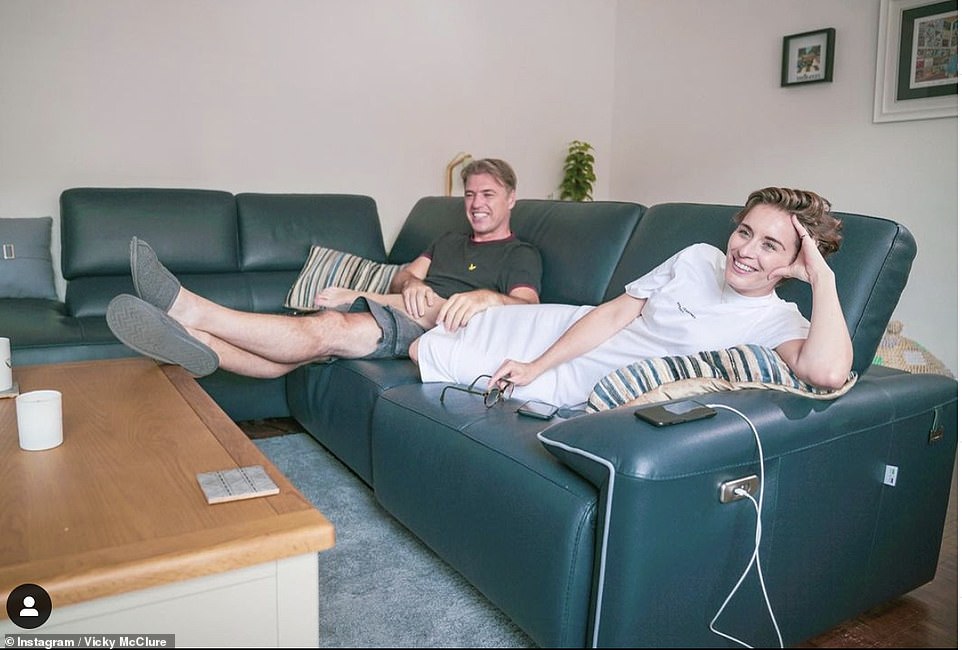 So cool: The actress, 37, and Jonny updated their living room set-up last November when they were gifted a corner sofa from his cousin’s Welsh interiors company which boasts a fun built-in charging point for her phone

During lockdown, Vicky also shared a few glimpses into her home’s spacious garden as she posted hilarious TikTok videos of herself and pal Chella dancing.

In the background of the video, several bushes and trees can be seen along a wooden fence to create a lush green area for the actress and her pals to enjoy while she’s home from filming.

While another dancing video revealed Vicky has opted for a clean and neutral vibe throughout her hallway, picking a smart cream carpet for the stairs and putting a stylish white blind in the window.

Elsewhere in her cosy abode, Vicky has stuck with his sleek design and kept the walls white but adding a splash of colour through fun artwork and prints. 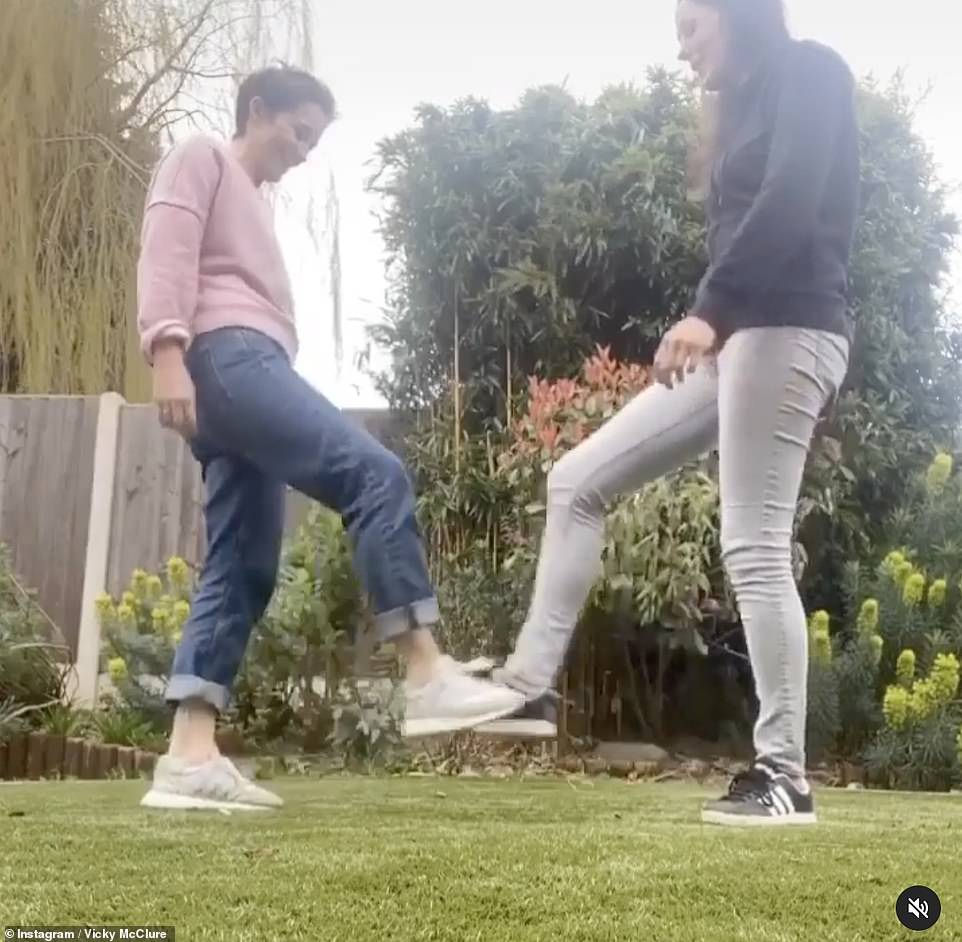 Lots of space: In the background of a TikTok video, several bushes and trees could be seen along a wooden fence to create a lush green area for the actress and her pals to enjoy while she’s home from filming 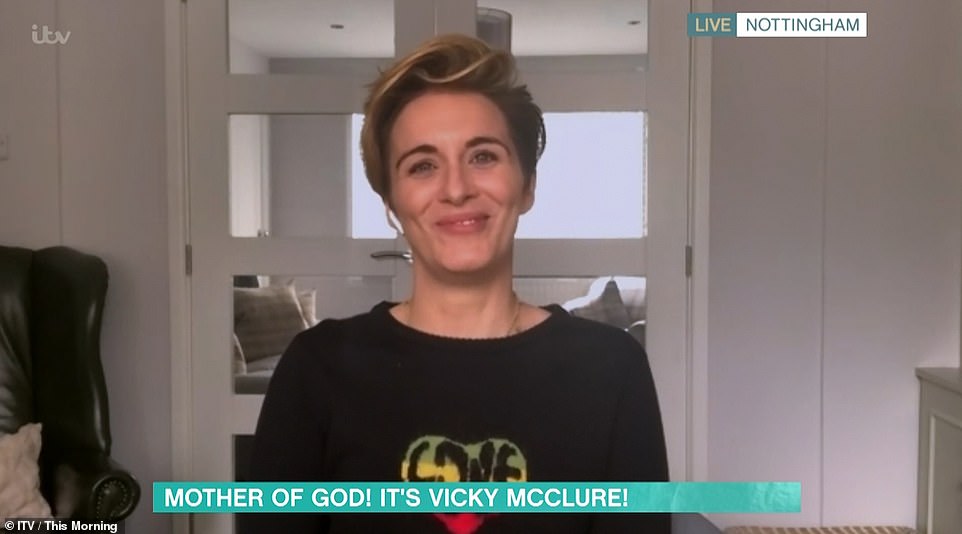 Stylish design: Vicky’s house also boasts a smart glass door separating a seating area and the dining room, which includes a comfortable high-back armchair in one corner and wooden cabinet on the other side of the room

And during a recent appearance on This Morning, Vicky revealed that she has a glass door separating a living area and dining room, where she did her interview from, while sitting close to a cosy leather armchair.

Vicky’s home also features a stunning shelving until which was built by her father, supplying lots of space for her to display keepsakes.

Back in 2017, Vicky invited Nottinghamshire Live into her hose who discovered that she keeps two Baftas in the dining room.

Although not the usual home accessory, the actress discreetly displays her gong for playing Lol in This Is England and Jonny’s Welsh Bafta for being a co-producer of documentary The Aberfan Disaster. 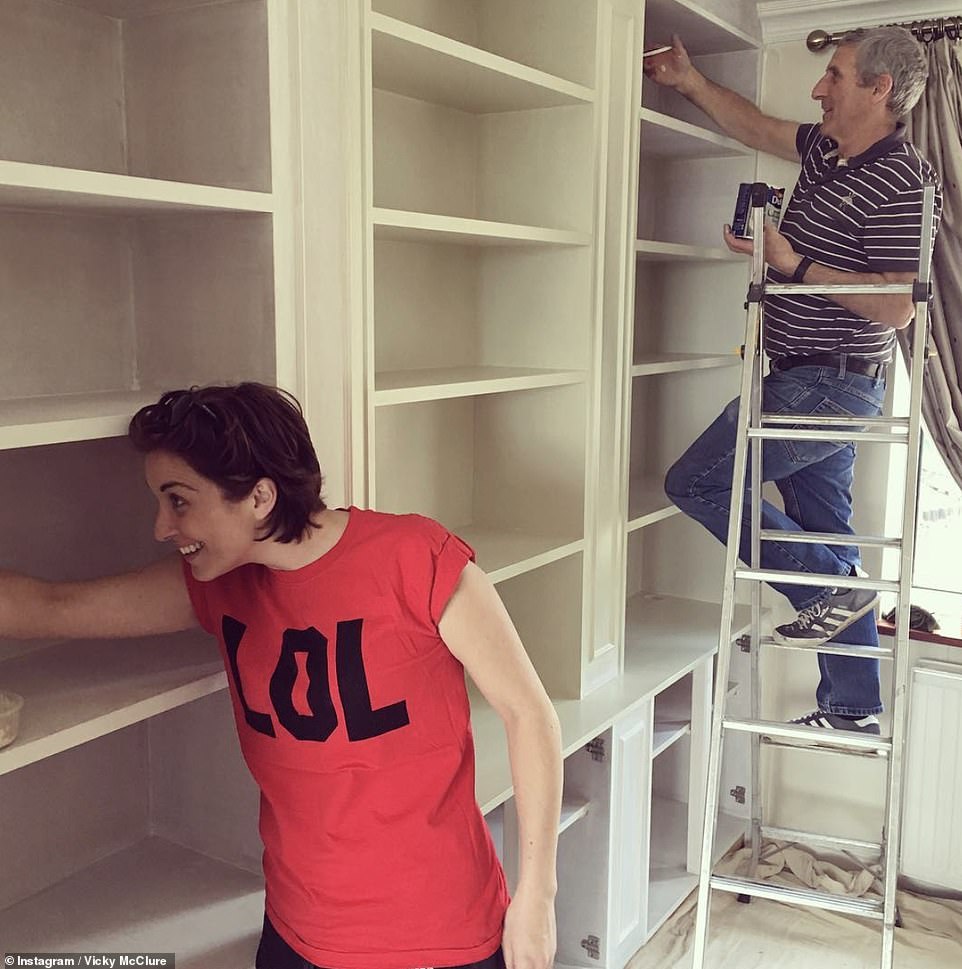 Personal touches: Vicky’s home also features a stunning shelving until which was built by her father, supplying lots of space for her to display keepsakes 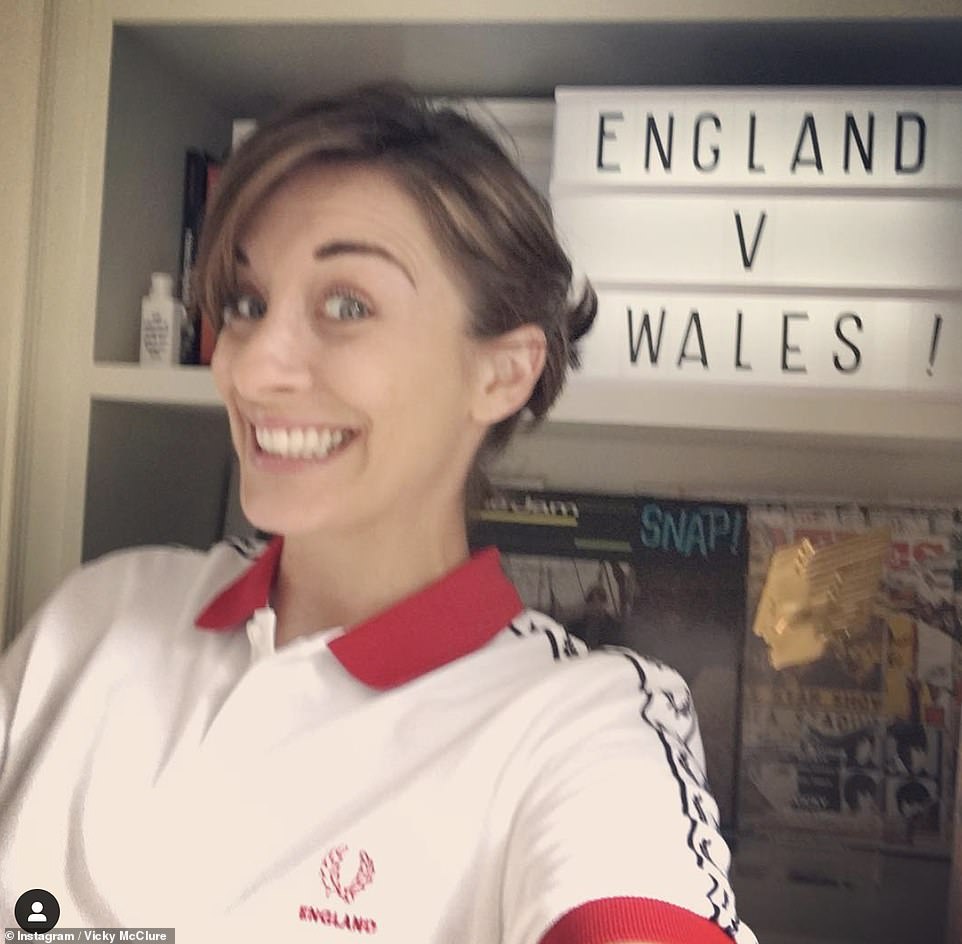 So practical! The actress previously posed against the shelving display which had been put to good use to showcase her books and light box during an England v Wales match

Vicky also reflected on her life in Nottingham and why she decided to stay living in her hometown instead of relocating to the capital in a past interview with The Guardian.

Talking in 2019, the actress shared her amusement over people being shocked when they find out she’s not moved to London.

She said: ‘It makes me laugh that it’s such a big deal. I find it more extreme that Martin Compston [her Line of Duty co-star] lives in Las Vegas. I live in my home town.’

And turning her attentions to why she doesn’t want to move, Vicky said: ‘I always said I can’t stay here because … I begrudge paying that much for a pint. It really does p**s me off. 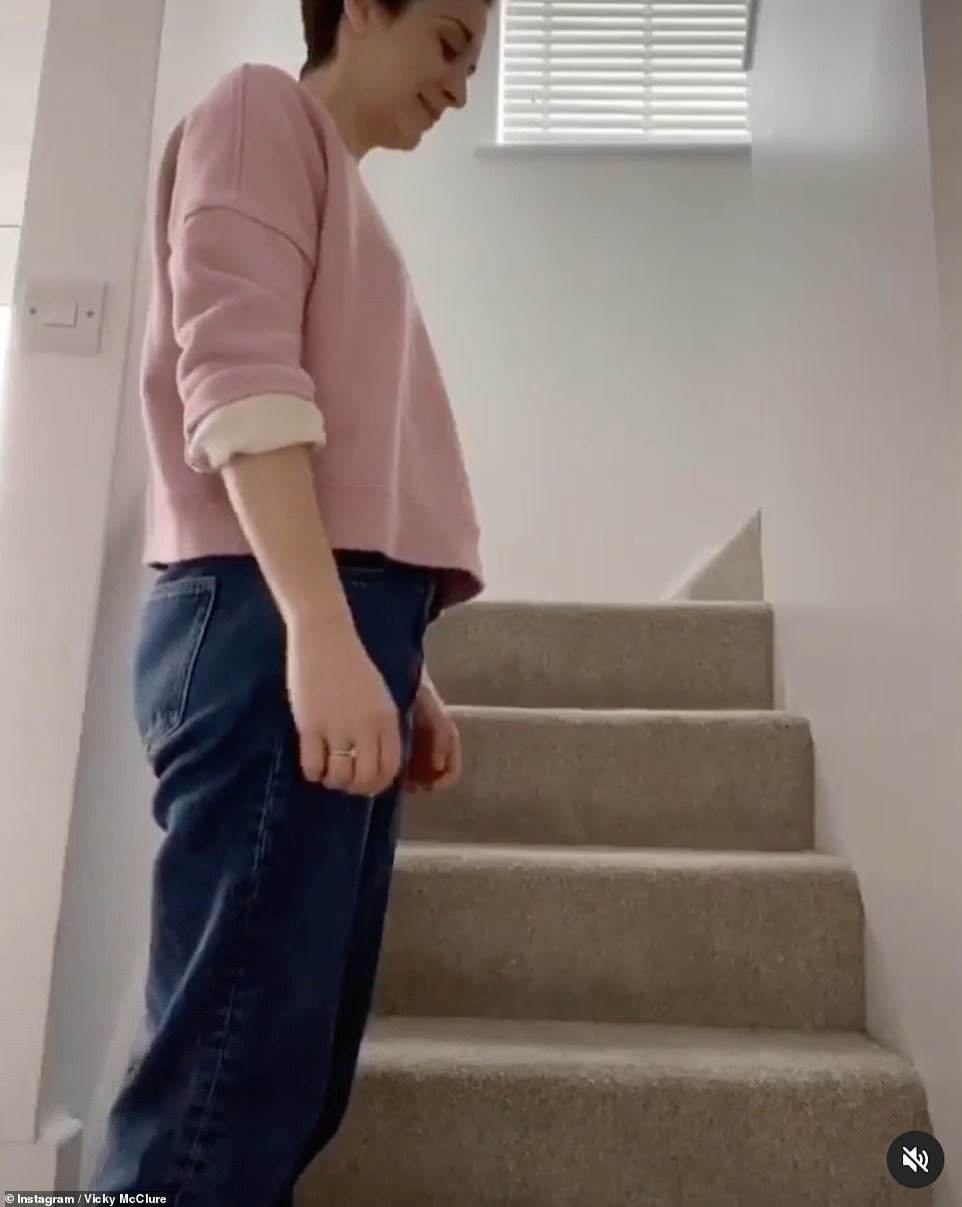 Natural: Another dancing video shared during lockdown revealed Vicky has opted for a clean and neutral vibe throughout her hallways, picking a smart cream carpet for the stairs and putting a stylish white blind in the window 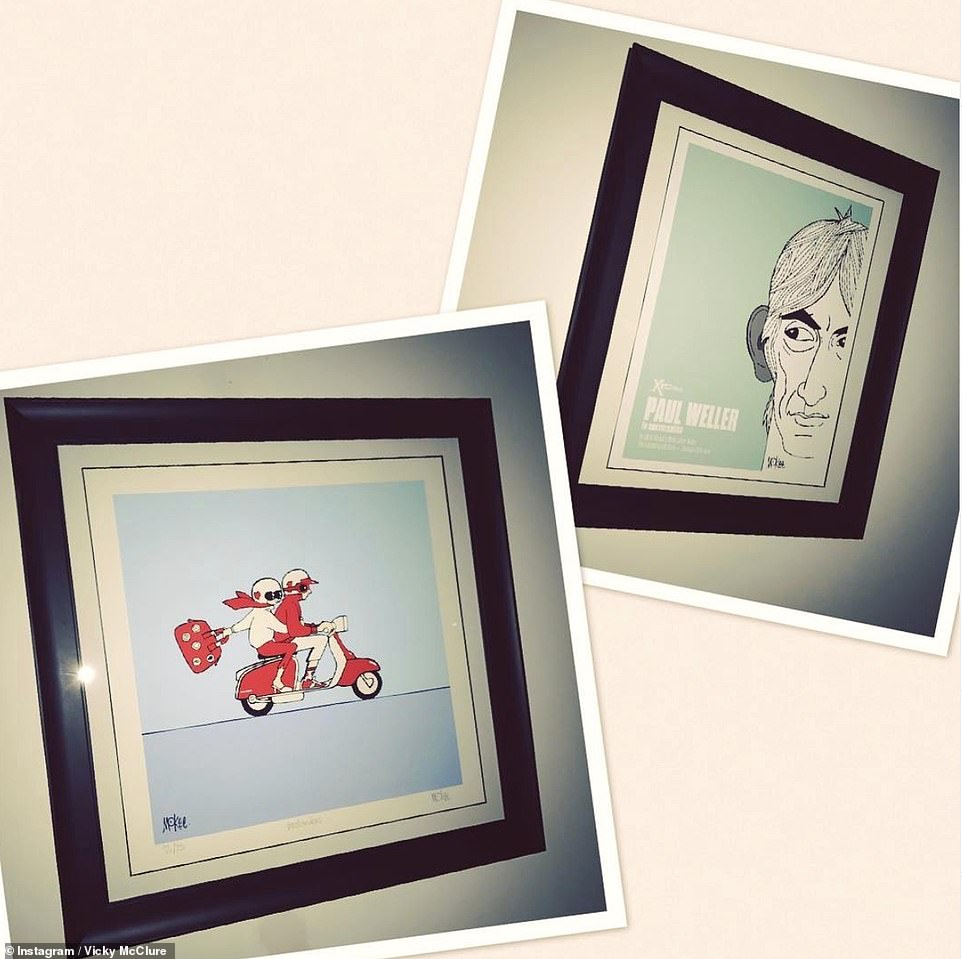 Artwork: She added a few splashes of colour by putting up fun artwork around the house

‘My life is not predominantly my work… I have a great opportunity to dip my toe into London, get loads of stuff done, and then I go home.’

It comes after Vicky’s co-star Martin Compston teased that Line Of Duty fans will get some ‘big answers’ during the finale, as he admitted he believes it could be the ‘perfect ending’ to the police drama.

The actor, who plays DI Steve Arnott in the show, spoke to the Shrine Of Duty podcast ahead of the last episode this weekend.

Martin, 36, confessed that while he thinks Sunday’s episode could be the best way to wrap up the ‘story arch’ – he also refused to rule out another series.

When quizzed on whether viewers will learn who the illusive ‘H’ is, Martin said: ‘I wouldn’t quite go the Jo Davidson no comment route – but what I will tell you is I think there’s a lot of pay offs coming this Sunday. 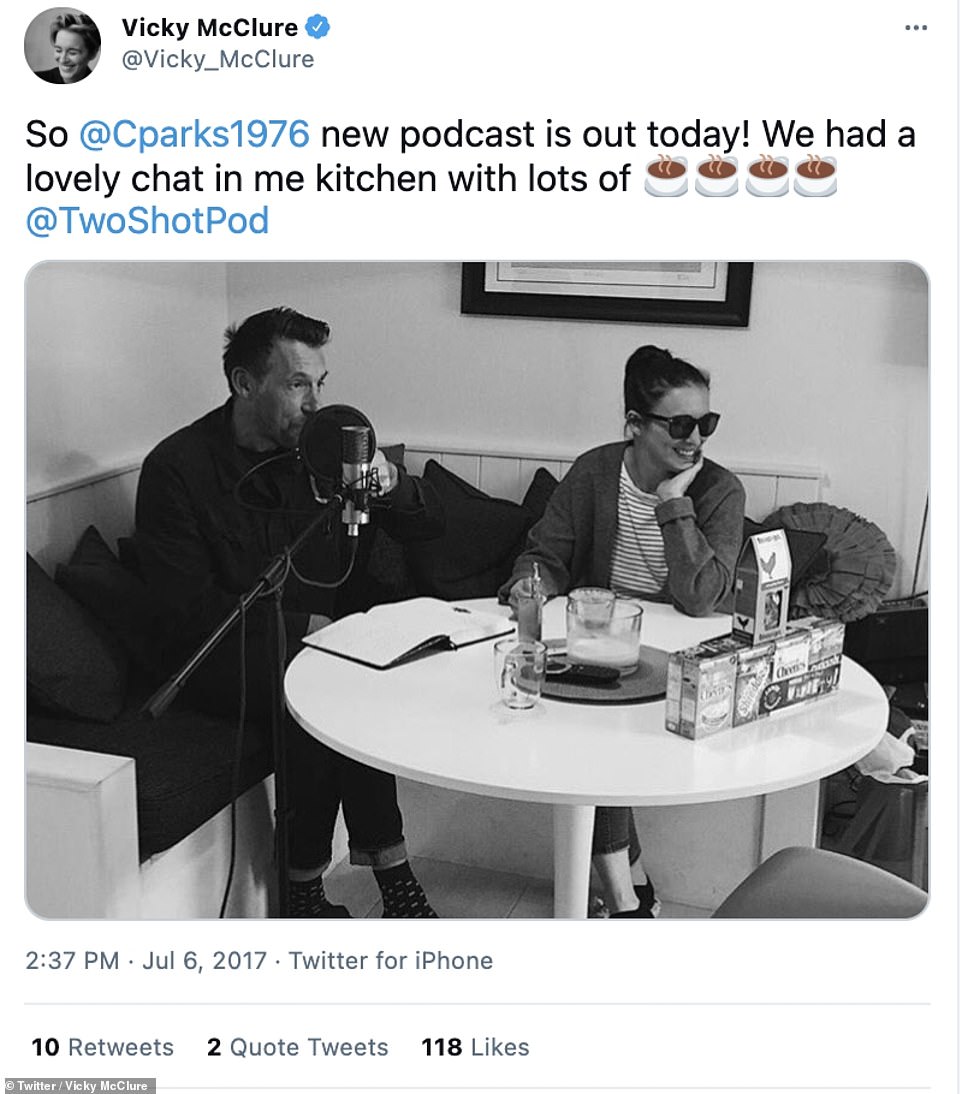 Social space: Vicky’s kitchen boasts a corner seating area and circle table, perfect for chatting to pals over a meal 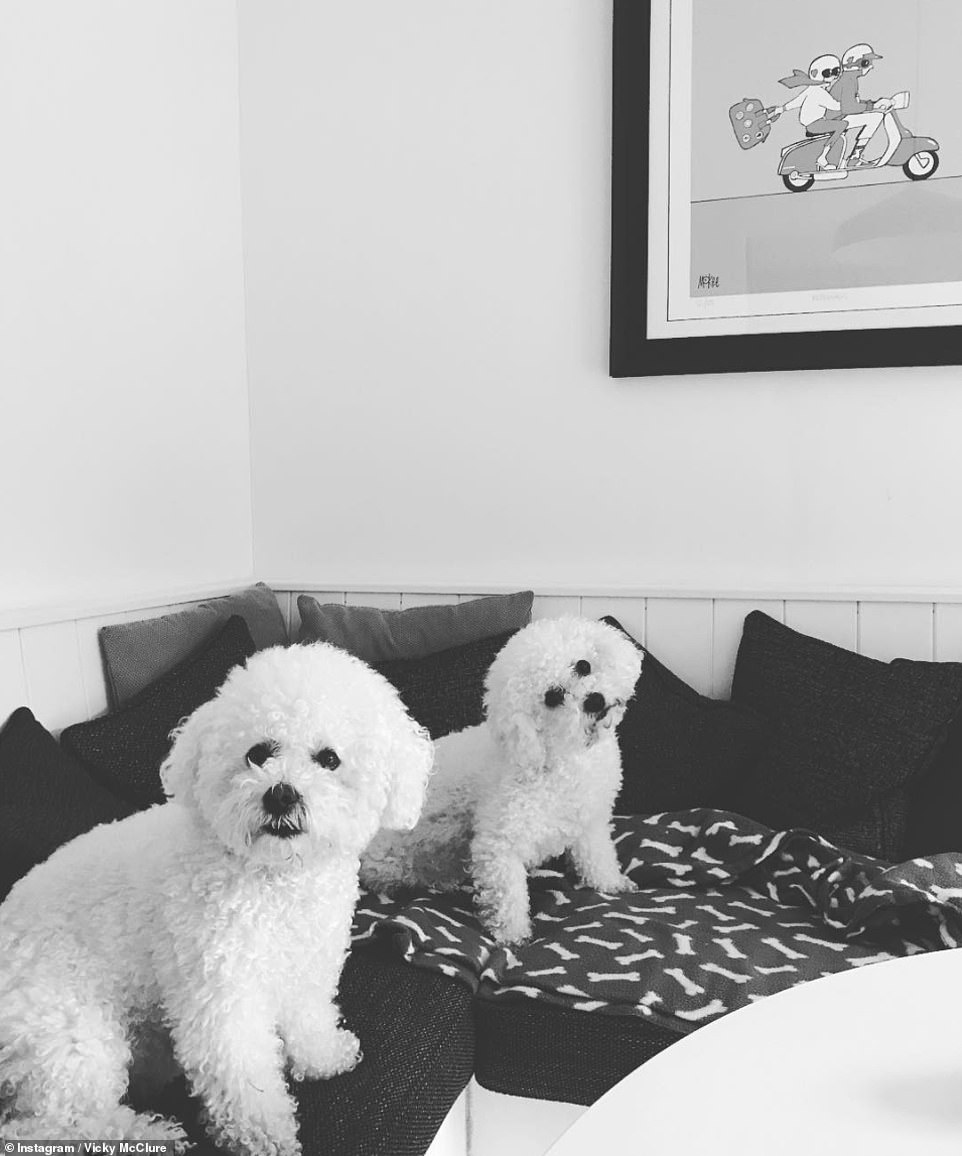 Cosy: Her two adorable dogs also seem to approve of the area,  which has been decorated with lots of comfortable cushions

‘There’s a lot of big answers and it’s deserved, people have stuck with us for a long time, so there comes a point where the story arch comes to an end.’

Martin also touched on whether series seven is likely, after show bosses previously claimed they believed the current season would be the last.

He said: ‘We don’t know [if there will be another] – that’s nothing new. Jed always takes time after a series, like a couple of months.

‘There’s a lot of stuff above my pay grade like analytics and audience scores. He takes the emotion out of it and looks at all that.’

Admitting it could be the ‘perfect ending’, he said: ‘It’s different this year, because we have to look it in terms of, do people want us back? 10 years in you start to think of legacy, and if it goes down that well it might be the perfect ending.’ 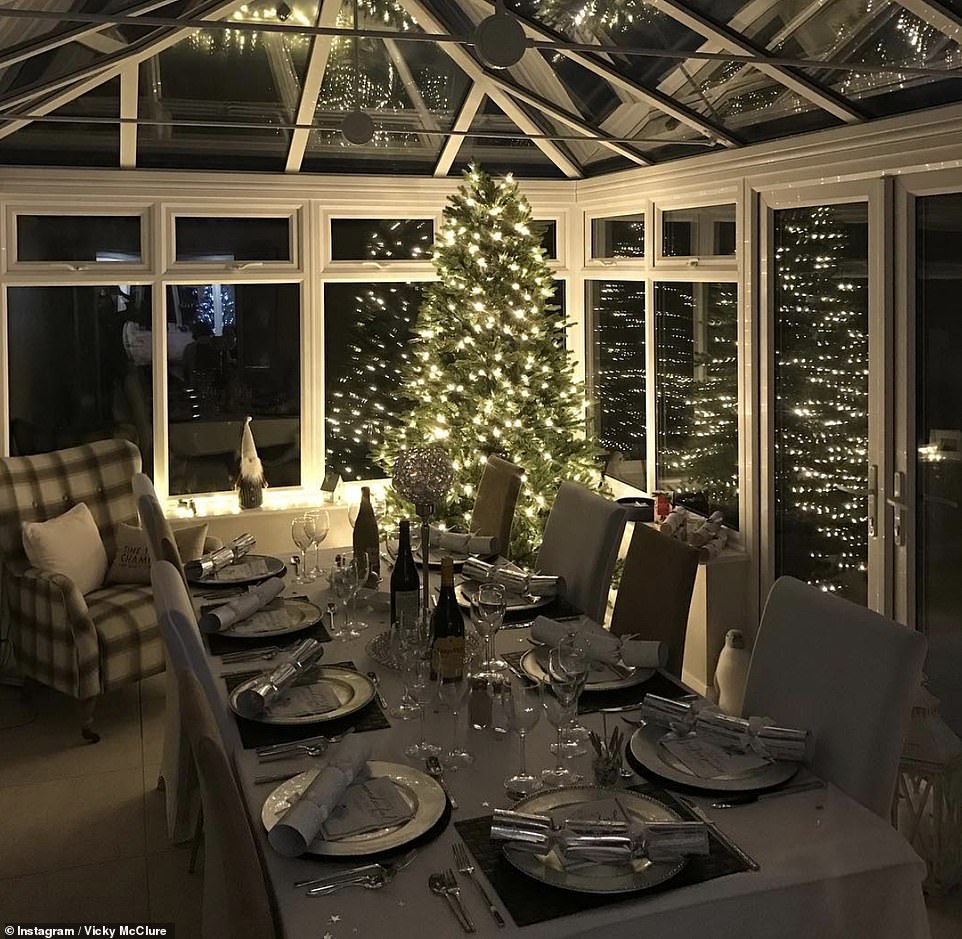 Extra space: Her Nottingham home also features a large conservatory, which was used as a dining area at Christmas in 2016 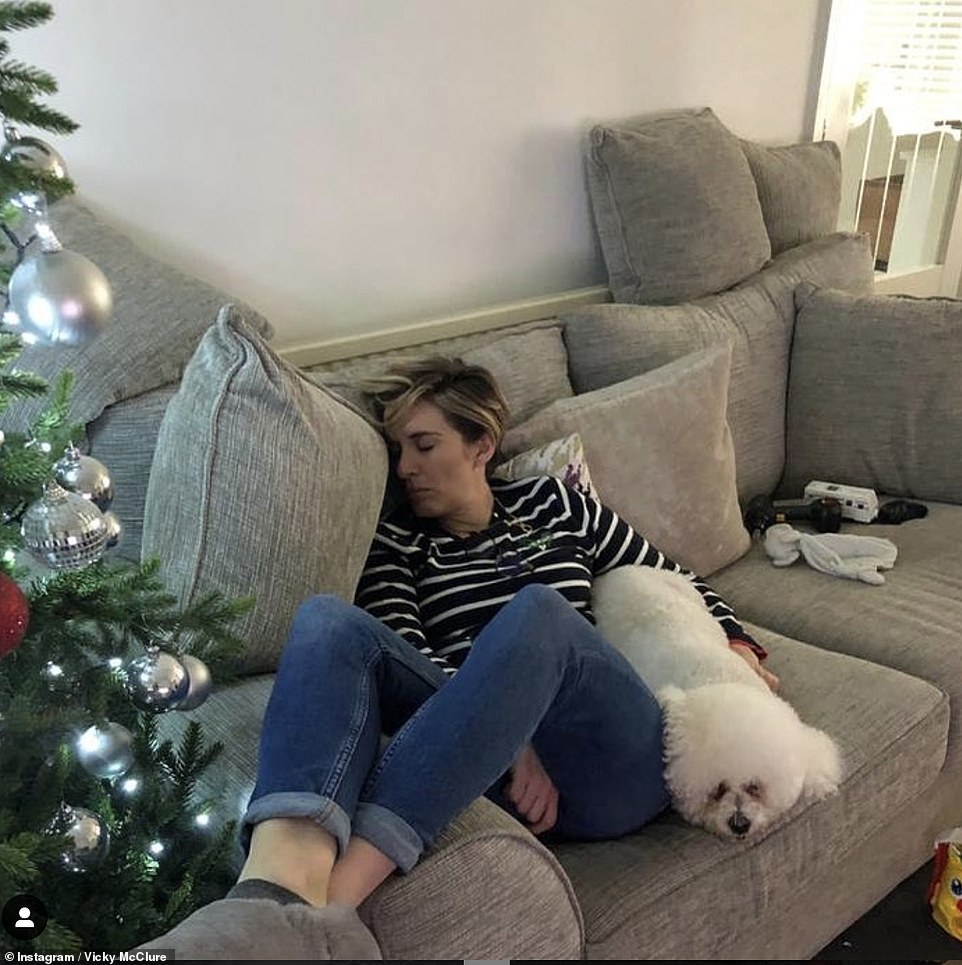 Kicking back: Vicky used to have a fabric grey sofa, which certainly seemed to be comfortable in a snap shared of herself napping on the couch during a previous Christmas time

The Birth of Bennifer: A look at Jennifer Lopez and Ben Affleck’s iconic love story

‘But then we might go another couple of months and… what I will say is we won’t do one just for the sake of doing it. Jed will only do it if there’s a story to be told.’

The chat comes days after a new trailer for Line Of Duty’s finale was released, only serving to heighten speculation around the identity of ‘H’.

Viewers can be certain of an action-packed finale episode complete with a police standoff, the return of balaclava men and the discovery of a written note with THAT ‘definately’ misspelling.

The trailer starts off with Superintendent Ted Hastings (Adrian Dunbar), who is facing imminent retirement, state: ‘All of these suspicious deaths were orchestrated by one officer in particular, H. The fourth man.’ 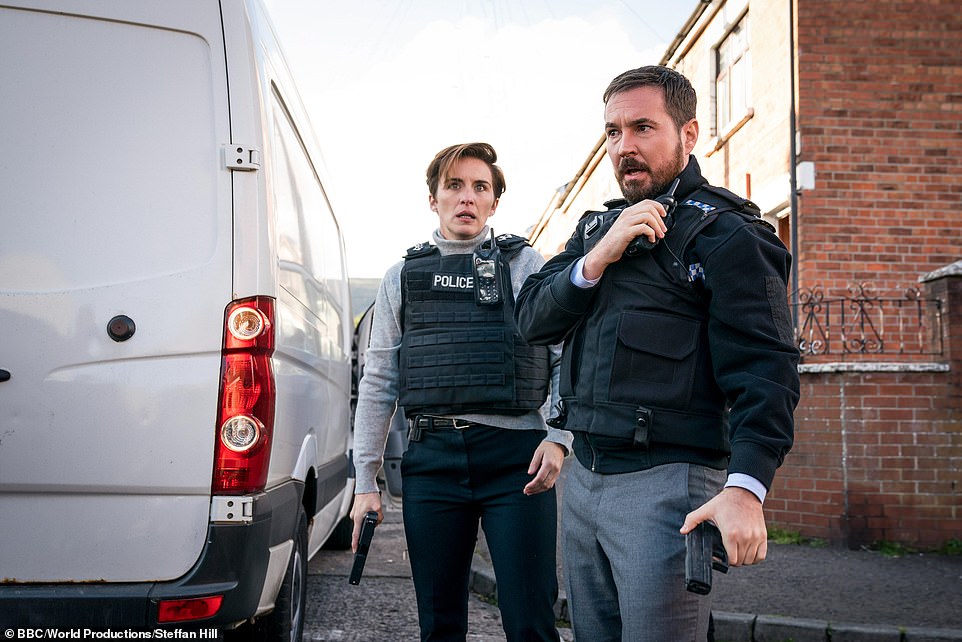 Teaser: It comes after Vicky’s Line Of Duty co-star Martin Compston teased that fans will get some ‘big answers’ during the finale, as he admitted he believes it could be the ‘perfect ending’ to the police drama

The trailer then shows acting Superintendent Jo Davidson (Kelly MacDonald) leaving the high-security prison in handcuffs, only to end up alone in a van with a corrupt prison officer who previously injured Lindsay Denton in series three.

Jo says: ‘What’s going on?’, before the camera flashes a sinister look from the prison officer.

A handwritten note is also teased in the trailer, with the word definite misspelt to mirror what viewers have seen previously.

A huge clue of the identity of H began to emerge in series five, when the OCG communicated with ‘H’ through a computer.

Eagle-eyed fans were quick to notice H spelling definitely as ‘definately’, and this misspelling has been repeated in subsequent episodes. 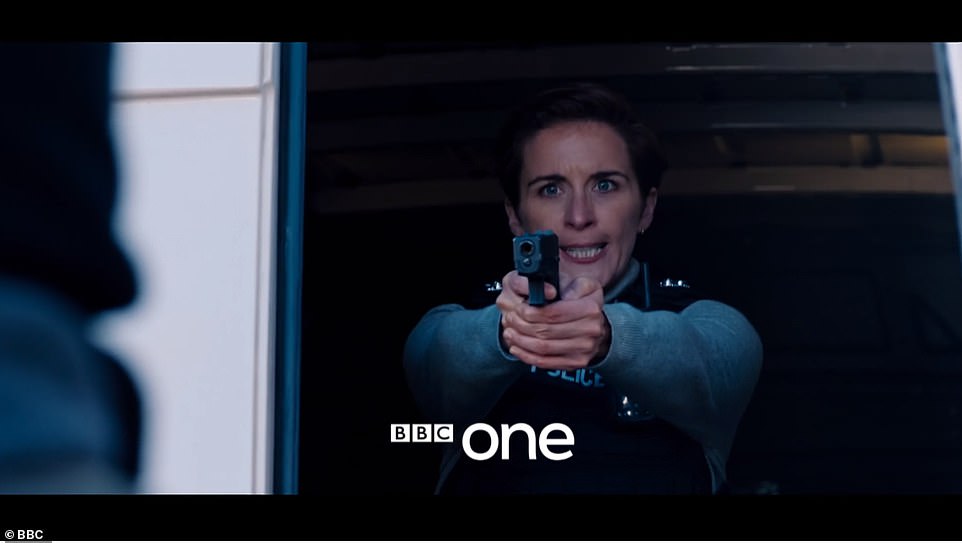 Coming back: Line Of Duty will be back on Sunday night and fans are eager to find out whether AC-12 will finally crack the case on the elusive H 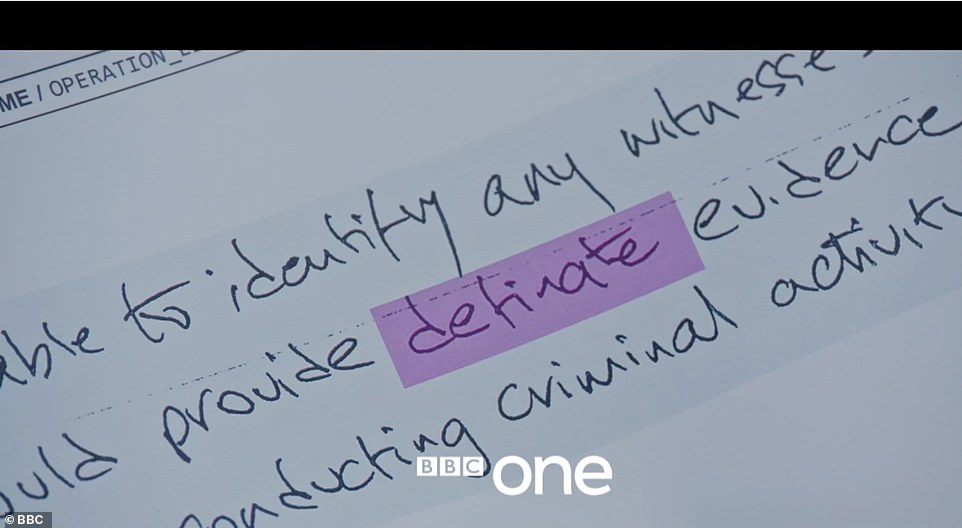 Trailer: In a teaser released on Monday, viewers can be certain of an action-packed finale episode with a police standoff, the return of balaclava men and that ‘definately’ misspelling 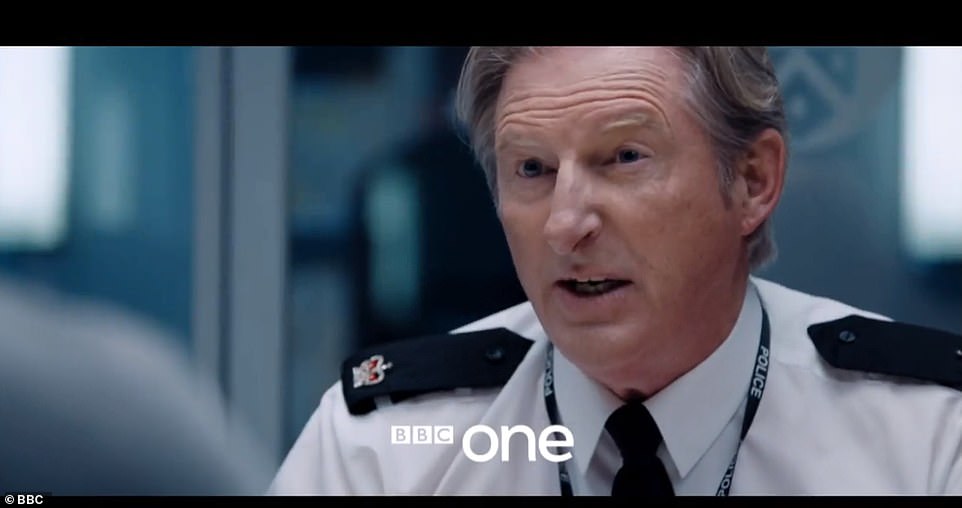 AC-12: The trailer starts off with Superintendent Ted Hastings (Adrian Dunbar), state: ‘All of these suspicious deaths were orchestrated by one officer in particular, H. The fourth man’

Will this handwritten report be the breakthrough AC-12 need to close in on ‘the fourth man’? It certainly seems Hastings and his team are on to something as police cars sped down the road, with armed officers closing in on a residential area during the trailer.

The Superintendent briefs DI Kate Fleming, DI Steve Arnott and DC Chloe Bishop as they arrive at the scene.

Hastings says: ‘AFO’s will secure the suspect down’, while the words ‘Every investigation has led to this… H’.

And it only gets more dramatic as balaclava men jump out of vehicles armed with guns themselves. Kate opens the police van, brandishes her gun and shouts: ‘armed police’ before the screen fades to black.

The new trailer for the finale showed Kate wearing the same grey turtleneck jumper as she is seen wearing in the on-set snaps, while it teases at the return of the balaclava men and shows DCI Jo Davidson handcuffed in prison. 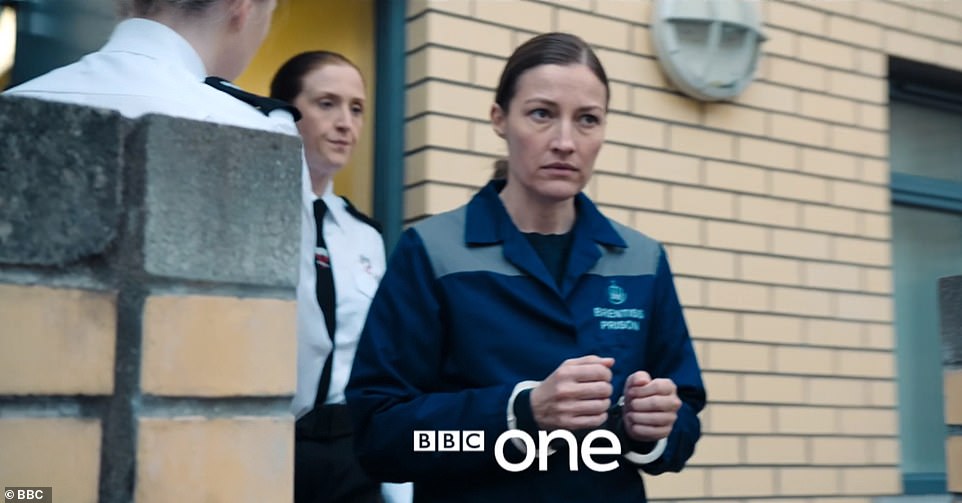 Wifey @iamcardib gives a break down of hubby @offsetyrn’s @chromeheartsofficial …