Jennifer Garner cut a casual figure while out and about in Los Angeles this Friday.

The 49-year-old enjoyed a solo sunlit stroll and warded off the rays with a fashionable hat as well as a sleek pair of shades.

She tucked a simple white T-shirt into a pair of black fitted jeans and added a splash of glitz to the look with a medallion necklace.

Off she goes: Jennifer Garner was spotted putting a dapper spin on California casual while out in Los Angeles this Friday

Last week she was seen dashing about New York City ringing in her latest birthday but she has since returned home to Los Angeles.

Although the pair have been split up since 2015 they have retained a famously amicable co-parenting relationship.

Ben has reportedly been spending time with his ex-fiance Jennifer Lopez after her split from her fifth and latest fiance Alex Rodriguez. 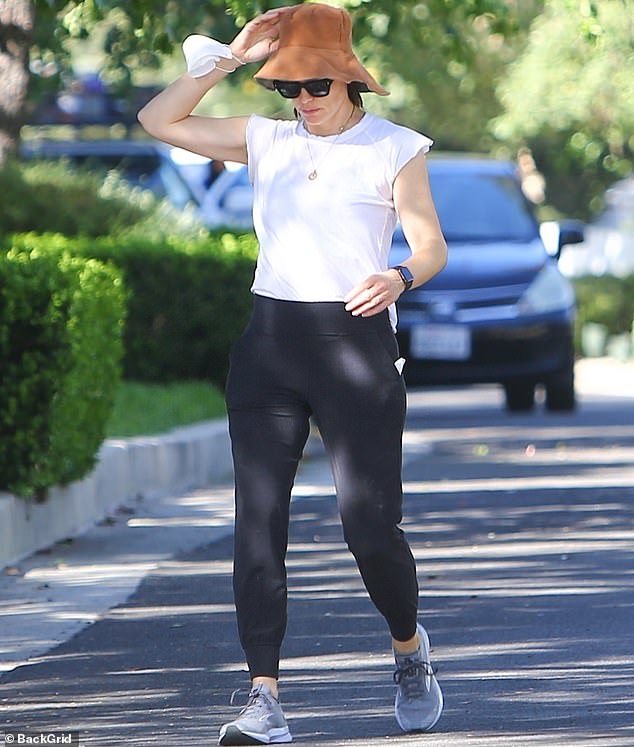 Looking fab: The 49-year-old enjoyed a solo sunlit stroll and warded off the rays with a fashionably droopy hat as well as a sleek pair of shades

‘Security picks him up at a nearby location and drops him off after spending a few hours at her house,’ a Page Six source dished.

However insiders said the rapport between them is platonic and one insisted: ‘They are friends…they’ve never not been.’

Last month Jennifer Garner revealed she had changed her mind on one of her famous quotes from the early days of her separation from Ben.

The 48-year-old actress told Vanity Fair in 2016 that ‘I lost the dream of dancing with my husband at my daughter’s wedding.’ 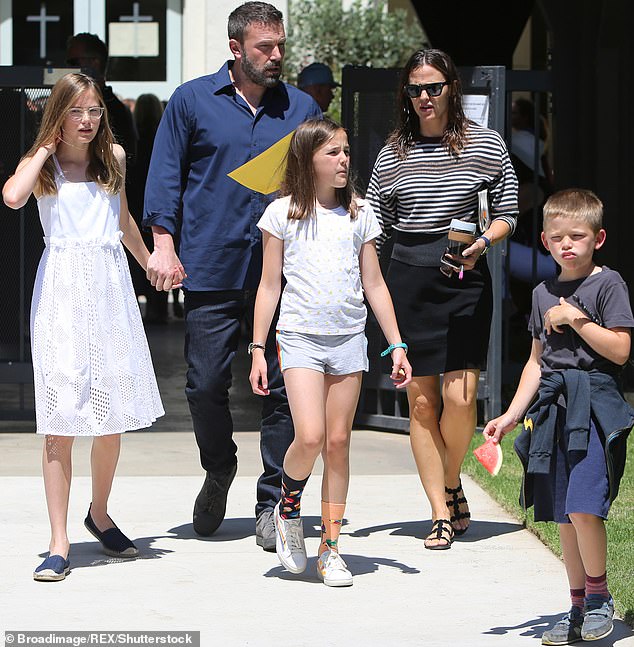 As seen in 2019: Jennifer shares her three children – Violet, 15, Seraphina, 12, and Samuel, nine – with her smoldering ex-husband Ben Affleck

However in a recent Hollywood Reporter interview she smiled and said: ‘When our kids get married, we’ll dance, I know that now.’

When they first separated in 2015 Ben was amid a swirl of reports about his affair with the family’s nanny Christine Ouzounian.

However Jennifer clarified to Vanity Fair in that 2016 interview: ‘Let me just tell you something. We had been separated for months before I ever heard about the nanny.’

The 13 Going On 30 actress continued: ‘She had nothing to do with our decision to divorce. She was not a part of the equation. Bad judgment? Yes. It’s not great for your kids for [a nanny] to disappear from their lives.’