Billie Eilish‘s lingerie shoot for British Vogue shocked fans when she departed from her famed grunge look to strip off.

The singer, 19, surprised the world when she shed her signature style to pose in underwear for the publication’s June issue, in a departure from her previous vows to ‘always wear baggy clothes’ so the world ‘could not know her’.

A host of fans swarmed Twitter to criticise the move, with many claiming her record label were the brains behind the look while other insisted she had ‘sold out’ to look like ‘what a woman should be’ and make money.

Her image overhaul comes after Billie spent much of her time in the spotlight defiantly refusing to show her skin, having previously said: ‘I never want the world to know everything about me. I mean, that’s why I wear big, baggy clothes’.

Changing look: Billie Eilish ‘s lingerie shoot for British Vogue shocked fans when she departed from her famed grunge look to strip off

Billie’s groundbreaking shoot rendered many of her fans speechless due to the vast difference in her style and the U-turn in her past comments about her clothes. 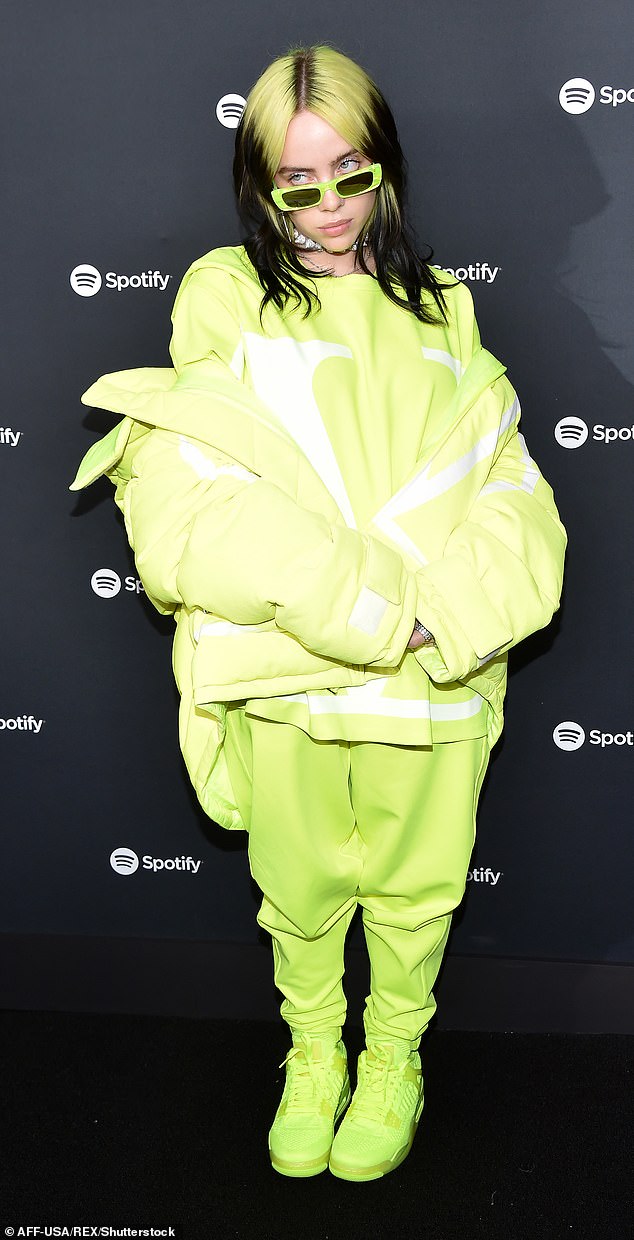 Who’s that girl? The singer, 19, surprised the world when she shed her signature style to pose in underwear for the publication’s June issue, in a departure from her previous vows to ‘always wear baggy clothes’ so the world ‘could not know her’ (pictured in January last year)

Billie’s baggy clothes and body: In her own words

– ‘To be quite honest with you, I only started wearing baggy clothes because of my body’

– ‘I never want the world to know everything about me. I mean, that’s why I wear big, baggy clothes: Nobody can have an opinion, because they haven’t seen what’s underneath’

‘Though you’ve never seen my body, you still judge it and judge me for it. Why? We make assumptions about people based on their size. We decide who they are, we decide what they’re worth.’

In a true departure from her earlier looks, when she shared the post – showing her swathed in PVC, bustiers and push-up lingerie – she soon invited mass praise from friends, stars and fans who were amazed at the change.

Following the transformation, unconvinced critics took to Twitter to pen: ‘In a corset? Ummm, yeah. Read the history on corsets and then come back and talk about empowerment…

‘Is showing your body ’empowering’ or did Billie Eilish not have enough fans or attention when she wore baggy clothes… I kno labels are behind @billieeilish new girly sexy look, i like the baggy billie tbh…

‘I think Billie Eilish’s management knew that deliberately concealing her body in those baggy clothes for all that time, and then doing a dramatic reveal leaving almost nothing to the imagination would generate a lot of discussion and keep her relevant. Sorry but I’m not a fan…

‘At least she’s not putting on baggy clothes. Who else thinks she was cajoled into not wearing her norms?… A sell out from a signature style to reinforce what “women” should be like.

‘You should have been on the cover with your black and green hair and baggy clothes. Tut tut tut.. She finally sold her soul, dont expect her to go back to baggy stuff now!… proof that money can make you change your values, another sell out.’

Aside from her less than impressed critics, industry friends Emily Ratajkowski, 29, Hailey Bieber, 24, and Meghan Trainor, 27, complimented the star’s ‘beautiful’ images, while fans hailed her an ‘icon’ for overcoming body-shamers and making them feel ‘comfortable in their own skin’. 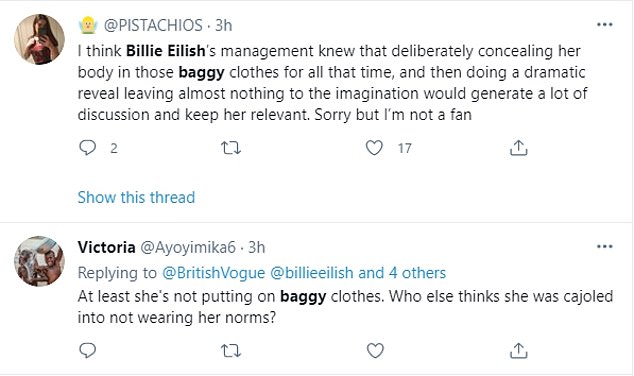 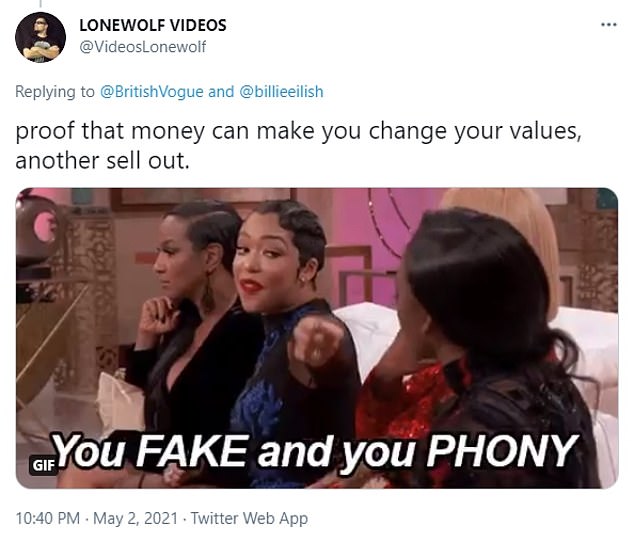 Changes: Her looks left some fans less impressed as they longed for her previous look

The Everything I Wanted hitmaker was met with support from her social media followers, with many highlighting that they were able to appreciate their figures after seeing Billie tap into her inner confidence with the bold shoot.

They wrote: ‘I don’t see many people that have my body type represented as something to envy or admire, and that’s on making me appreciate my body today… she’s an icon , she’s a legend and she is the moment.

‘billie eilish looks so good in her vogue cover, the way she doesn’t care what people think of her and is just doing what she wants is amazing, i’m so glad she found confidence in herself and her body. 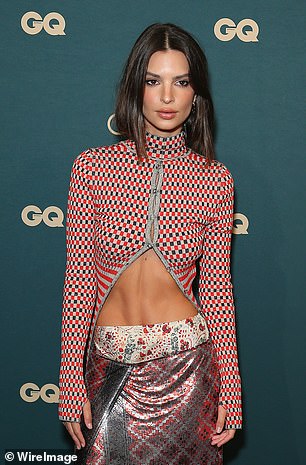 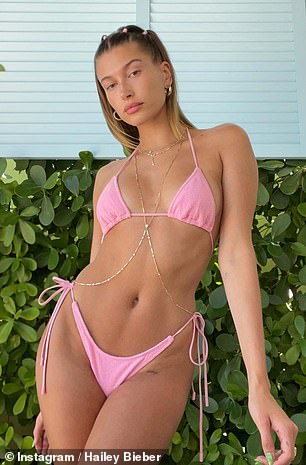 Others were more complimentary however with model Emily (L), 29, and catwalk queen Hailey (R), 24, complimented the pop star’s ‘beautiful’ images after she ditched her signature look

‘Billie Eilish looks incredible in Vogue. There is so little representation of what DD+ look like. If you have big boobs, lots of clothing will make you look larger or more provocative. And I’m really happy that Billie feels confident in her body, it makes me feel good in mine.

‘I love the new billie eilish vogue edit not just because she is beautiful but because she has my ‘mid size’ body type, she has so many amazing accomplishments but seeing my body like that has really made me feel a lot more comfortable in my own skin.

‘The fact Billie Eilish received so much backlash for having a body that so many women have last year, and then produces THAT photoshoot for vogue. INSPIRING, I feel so represented you have no idea.

‘seeing all of the billie eilish Vogue love on Twitter is making me feel empowered as hell, knowing that i have a body similar to hers and maybe that is actually a super attractive thing. 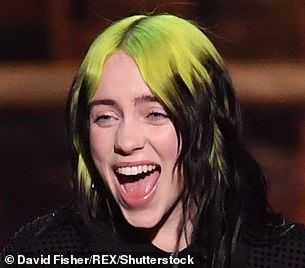 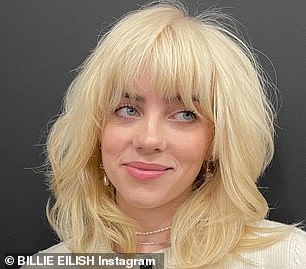 Transformation: Billie had long been known for her black and neon green tresses, but secretly dyed her hair blonde over six weeks, before sharing the new look in March (right)

‘She brought an important perspective on body image for young women and how being comfortable in your own skin comes first.

‘As if I’ve seen people complaining that Billie Eilish has done a 360 from wearing baggy clothes to cover her body and then has now done the Vogue photo shoots wearing what she’s wearing.

‘It’s a big F you to all the people commenting on her body because she’s stunning in anything.’ (sic)

‘Do whatever you want, queen!’ The celebs joined supermodel Sara Sampaio, Editor-In-Chief Edward Enniful and plus-size icon Tess Holiday in the musician’s comments

In the interview, the award-winning songwriter revealed she feels ‘more like a woman’ with her new blonde hair as she detailed her transformation.

The Bad Guy hitmaker admitted she was ready for her new look ‘to suck’ after keeping it a secret from her fans for months, but said it’s given her new lease of life.

Billie looked worlds away from her androgynous style as she channelled Hollywood superstar Marilyn Monroe in a pink corset and suspenders for the shoot, as she went onto discuss her haunting single Your Power. 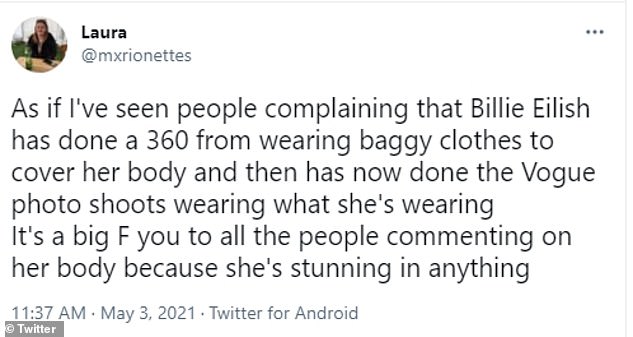 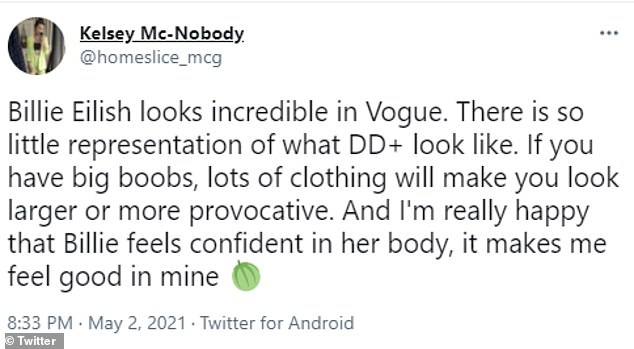 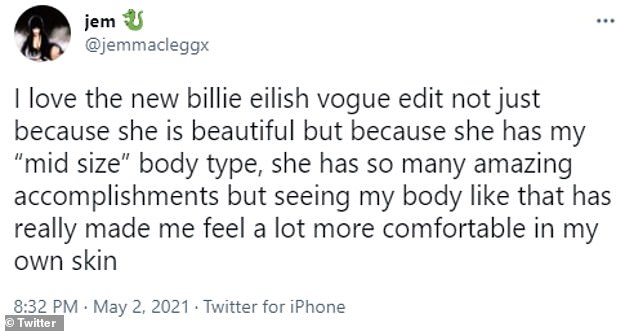 ‘I’m really happy that Billie feels confident in her body’: Fans hailed her an ‘icon’ for overcoming body-shamers and making them feel ‘comfortable in their own skin’

Discussing her new blonde hair, Billie confessed she was ‘ready for it to suck’ but it’s actually been the perfect transformation.

She said: ‘I feel more like a woman, somehow.’

Having long been an advocate of confidence, Billie also vowed to clear up any misconceptions as she felt her intent has been formed ‘lot of weird miscommunications.’ 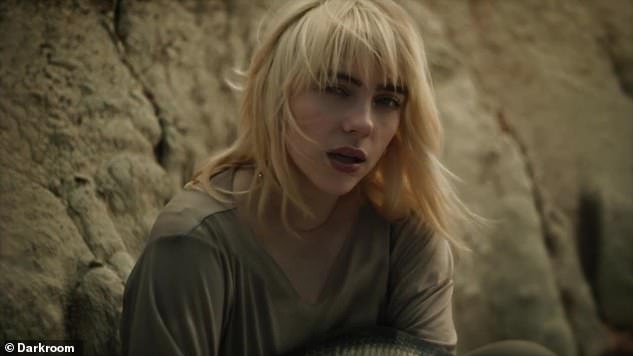 Moving: The media personality recently unveiled the video of her newest single Your Power, which highlights the subjects of sexual abuse, coercion and control (pictured)

She added: ‘It’s all about what makes you feel good. If you want to get surgery, go get surgery.

‘If you want to wear a dress that somebody thinks that you look too big wearing, f**k it – if you feel like you look good, you look good.’

Billie recently unveiled the video of her newest single Your Power, which highlights the subjects of sexual abuse, coercion and control, and told the publication it’s a message to the viewer to consider their perceptions of women based on their looks.

‘Don’t make me not a role model because you’re turned on by me,’ she said.

‘I’ve grown so much and gotten so much better in my voice, it’s crazy to think about. I think change is one of the best gifts in the world.’

Billie, who said she rekindled her love for music in lockdown, added that she hopes by taking a statement on her own beliefs she hopes to maintain control over her own narrative.

The star continued: ‘It’s about taking that power back, showing it off and not taking advantage with it. I’m not letting myself be owned anymore.’

Discussing her future self, Billie went onto say: ‘It’s about taking that power back, showing it off and not taking advantage with it. I’m not letting myself be owned anymore.’ 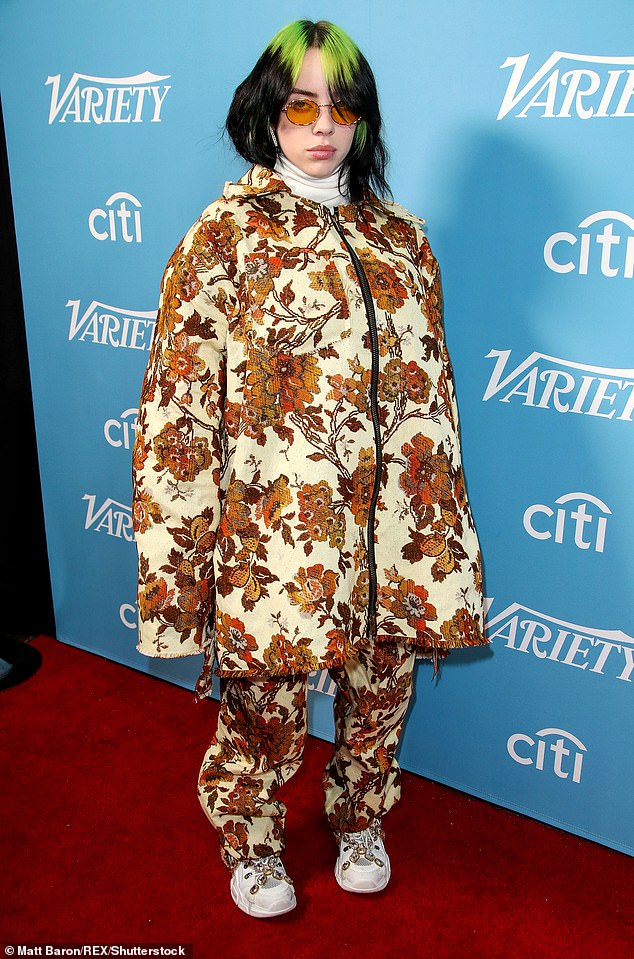 Her trademark: Traditionally, the singer has been known for her oversized, baggy style clothes (pictured in 2019)

Batman also made an appearance at the #blacklivesmatter movement. @buckscountyb…