The 36-year-old felt ‘very vulnerable and scared’ about sharing her diagnosis at the time, as she acknowledged ‘invisible illnesses’ are not always understood.

Tiffiny thanked her loyal fans for their unwavering support and kind messages in an emotional update on Tuesday.

‘It can ruin your life’: The Biggest Loser’s Tiffiny Hall (pictured) shared an emotional update on long-term health battle to Instagram on Tuesday as she revealed what her ‘cornerstones of her recovery’ would be in coming months

Chronic Fatigue Syndrome / ME (myalgic Encephalomyelitis) is a disease characterised by extreme exhaustion, sleep abnormalities and, in some cases, pain.

POTS (Postural Orthostatic Tachycardia Syndrome) is an illness that affects the flow of blood to the top of the body, with symptoms including lightheadedness, fainting and rapid heartbeat.

‘It’s complex, its hard to understand, you may look fine and present well, but it really can ruin your life, unless you take some time out to recover properly…  I’m resting up, feeling positive and ready to take this on!’ Tiffiny said.

‘The real root of the problem, for me, was removing some stress in my life, removing insults to the nervous system, and focusing on those pillars of TIFFXO; movement, mindfulness and nutrition. They are the cornerstones of my recovery.

‘I have to re-look at the way I do things, because CFS does seem to affect a lot of athletes and target people who have type-A personalities. You have to look at your priorities and they way you do things, so it’s a bit of reset. 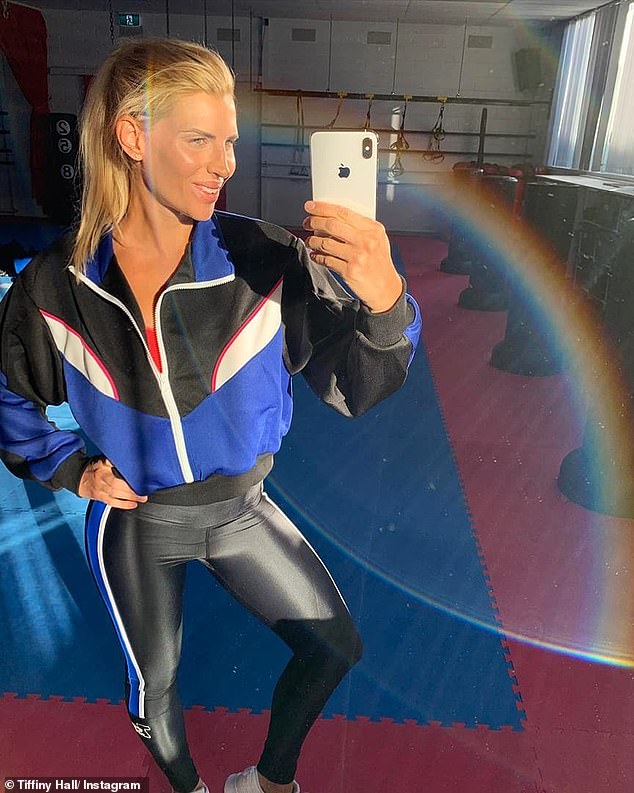 ‘I’m resting up, feeling positive and ready to take this on!’ Tiffiny planned to use her pillars of TIFFXO (movement, mindfulness and nutrition) to get her through her health battle 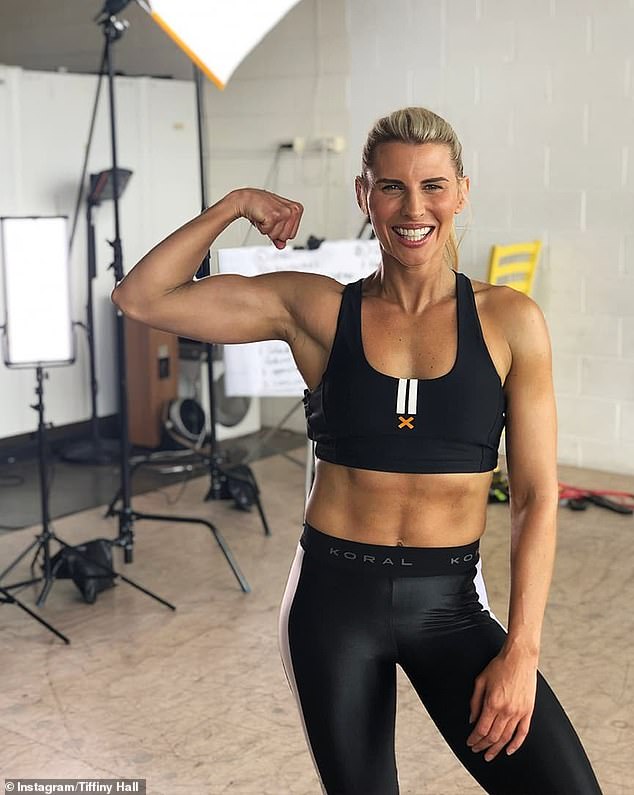 ‘I have to re-look at the way I do things’: Tiffiny said she had to ‘reset’ her life, her priorities and they way she does things

Posting to Instagram last week, Tiffiny revealed she’d undergone ‘a gazillion tests to figure out what could be wrong’ before finally being diagnosed with two genetic blood pressure conditions known as Chronic Fatigue Syndrome/ME and POTS.

In her caption, Tiffiny wrote: ‘Okay, deep breath. I’ve decided to share something very personal with you today. For some time now I’ve been battling a little with my health. A lot actually.’

Tiffiny admitted she’s struggled to accept her condition, and has ‘felt like she’s hit rock bottom at times’. 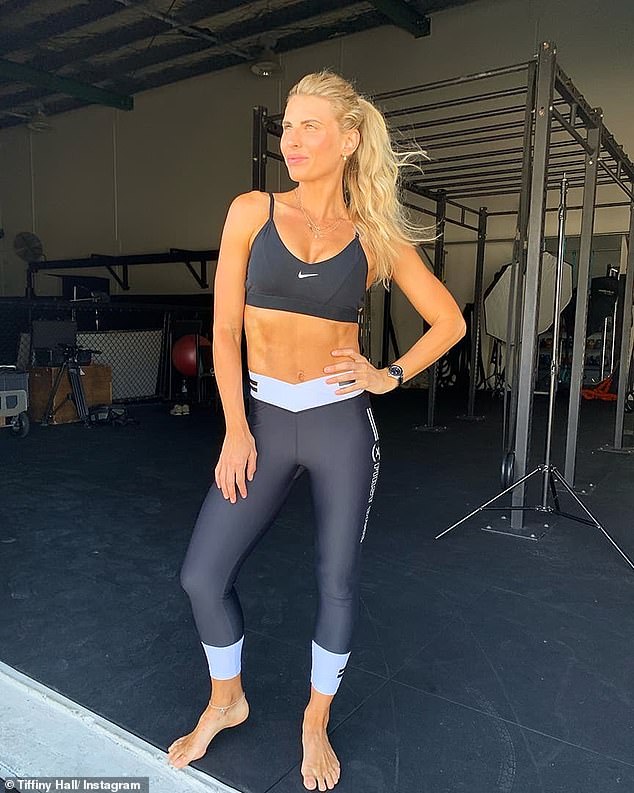 ‘I’ve decided to share something very personal with you today’: The Biggest Loser trainer Tiffiny Hall, 36, (pictured) lifted the lid on her long-term battle with Chronic Fatigue Syndrome/ME and POTS in an Instagram post last week 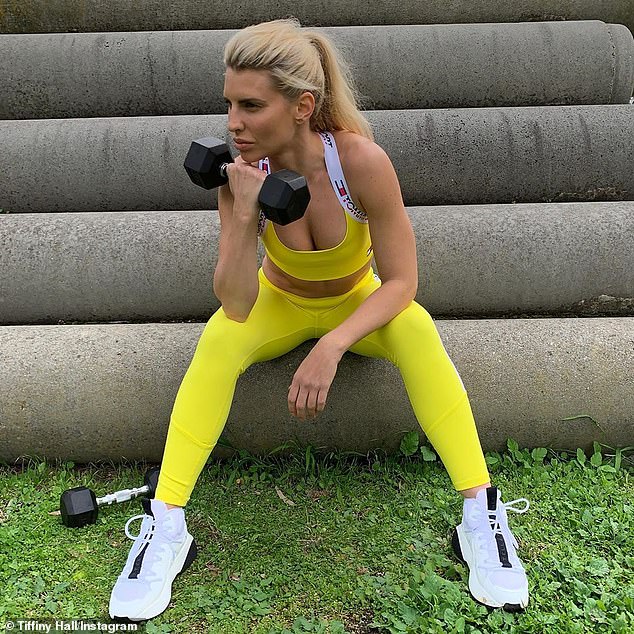 Diagnosis: Tiffiny said she’d undergone ‘a gazillion tests to figure out what could be wrong’ before finally being diagnosed with the genetic blood pressure conditions

‘While I’m staying positive, recovery is tough and will mean taking a break for a little while to get well again,’ she continued.

‘This is one of the hardest decisions, but I have to practise what I teach. For now, I’m prioritising recovery and family, and hopefully will be back in no time.’

The personal trainer assured her fans that her online fitness community TIFFXO would still run in future, but that her social media engagement may be ‘less frequent’. 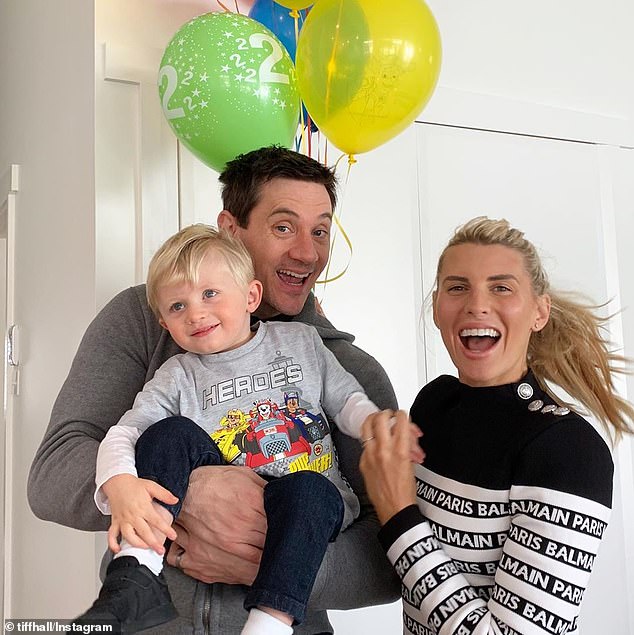 ‘For now, I’m prioritising recovery and family’: The personal trainer assured fans that her online fitness community TIFFXO would still run in future, but that her social media engagement may be ‘less frequent’. Pictured with husband Ed Kavalee, 41, and their son Arnold, three 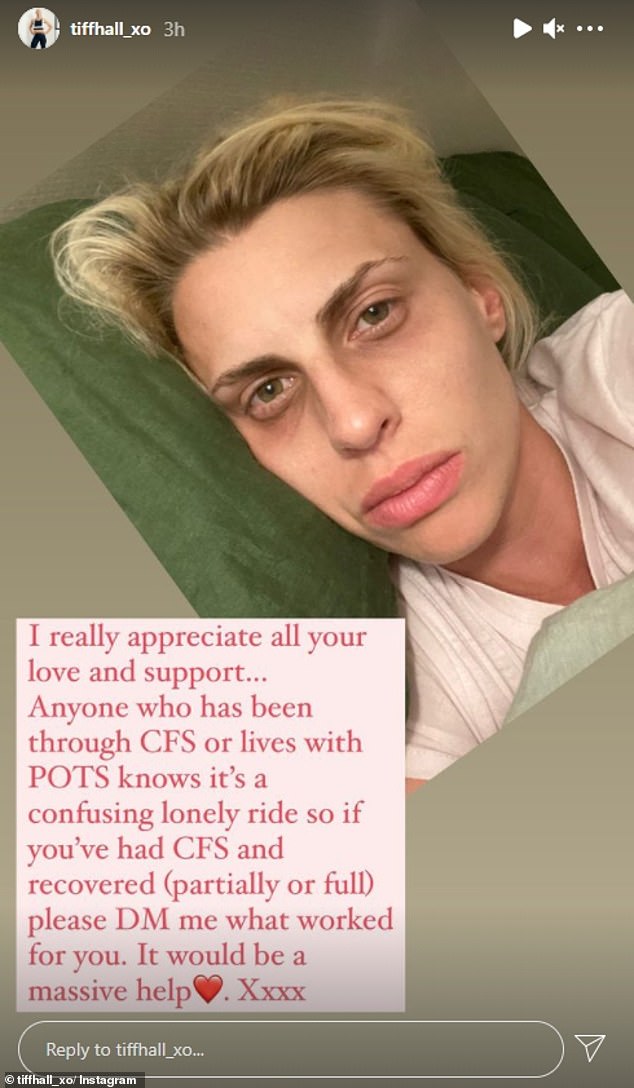 Reaching out: Tiffiny also shared this Instagram Story post last week, thanking her fans for their support and encouraging them to share their personal experiences with the disease

‘Coaching you is a great privilege that I never take for granted, so TIFFXO will keep kicking with fun new workouts I shot recently hitting the planner soon (perfect timing!), fabulous trainers (another newbie on the way), and Team Tiff standing by,’ she wrote.

The mother-of-one also spoke to News.com.au about her condition last week, revealing that she first experienced symptoms of Chronic Fatigue in high school. 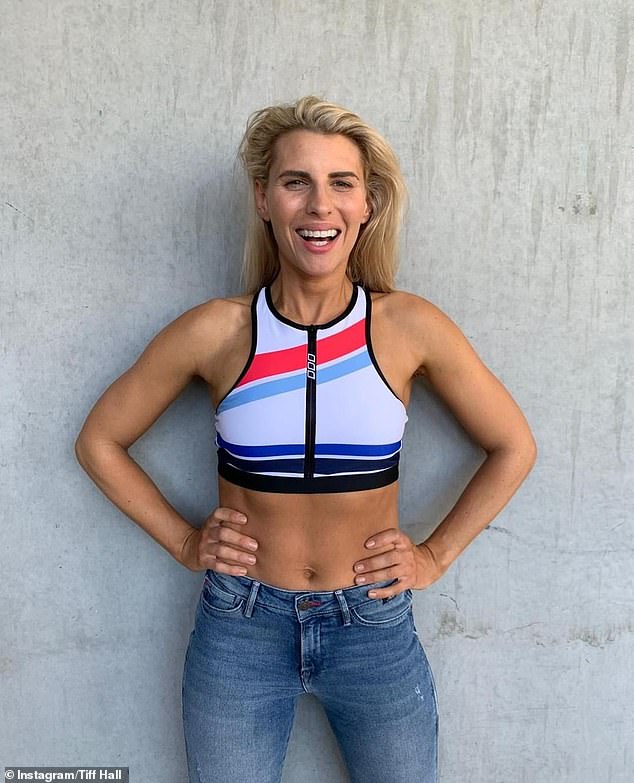 ‘After being in remission for over 20 years up until now, I’m confident I can beat it again’: The mother-of-one also spoke to News.com.au about her condition, revealing that she first experienced symptoms of Chronic Fatigue in high school

By ‘eck! Southerner Joe Sugg is cast as a TV Yorkshireman

‘It’s very common for CFS to re-present itself over time, but after being in remission for over 20 years up until now, I’m confident I can beat it again,’ she vowed.

‘I’m feeling truly grateful for all of the support and love I’ve received since sharing this very sensitive news,’ she said.

What is Chronic Fatigue/ ME and POTS?

Doctors are yet to understand the causes of the illness. There is currently no cure for the debilitating illness but there are treatments which could help the symptoms.

Other symptoms include headaches, muscle pain, joint pain, sore throat, loss of memory or poor concentration, not feeling refreshed after being asleep, enlarged lymph nodes and unusual tiredness after exercise.

Postural orthostatic tachycardia syndrome (POTS) is a disorder of the autonomic nervous system, causing blood vessels not to respond efficiently to the signal to tighten.

When a patient with POTS is upright, blood pools in the lower half of the body, and not enough returns to the brain.