Ian Somerhalder credits wife Nikki Reed for rescuing him from ‘terrible’ business situation: ‘I owe her my health, my life and my sanity’

Ian Somerhalder opened up about how his wife Nikki Reed helped rescue him out of a ‘true nightmare’ following ‘a terrible business situation’ that put him in debt by at least $10million.

In a belated birthday message to Reed on Instagram, The actor revealed he invested heavily in an effort to build an ‘important company’ while still shooting The Vampire Diaries (2009-2017), before he got together with his wife.

‘This mama. This human. I owe you such gratitude for it all,’ the actor, 42, began in the post, before adding that Reed is the reason he was able to start up his company – Brother’s Bond Bourbon – with his TVD on-screen brother, Paul Wesley.

High praise: Ian Somerhalder took to Instagram to credit his wife, Nikki Reed, with rescuing him from serious financial problems in connection to investments he made into a company before they were married in April 2015

‘I’ve never disclosed this publicly, but this woman worked selflessly for 2yrs to build me out of a terrible business situation I got myself into’, he wrote alongside a photo Reed snuggled up to her husband as he held up a glass of his brand’s bourbon.

‘I invested heavily, I made huge personal guarantees to banks. However due to greed and fraud within that company and fraudulent activities from our biggest customer, not to mention the temporary collapse of the oil and gas industry – I was left in an EIGHT- FIGURE hole.’

While never revealing the name of the business or any of the people involved, Somerhalder did share how the fallout from his ‘awful’ investments became ‘a true nightmare day in and day out.’

‘I had to travel the world weekly to pay for massive monthly six-figure bank notes and ended up in the hospital 4 times in 2 years,’ he recalled. 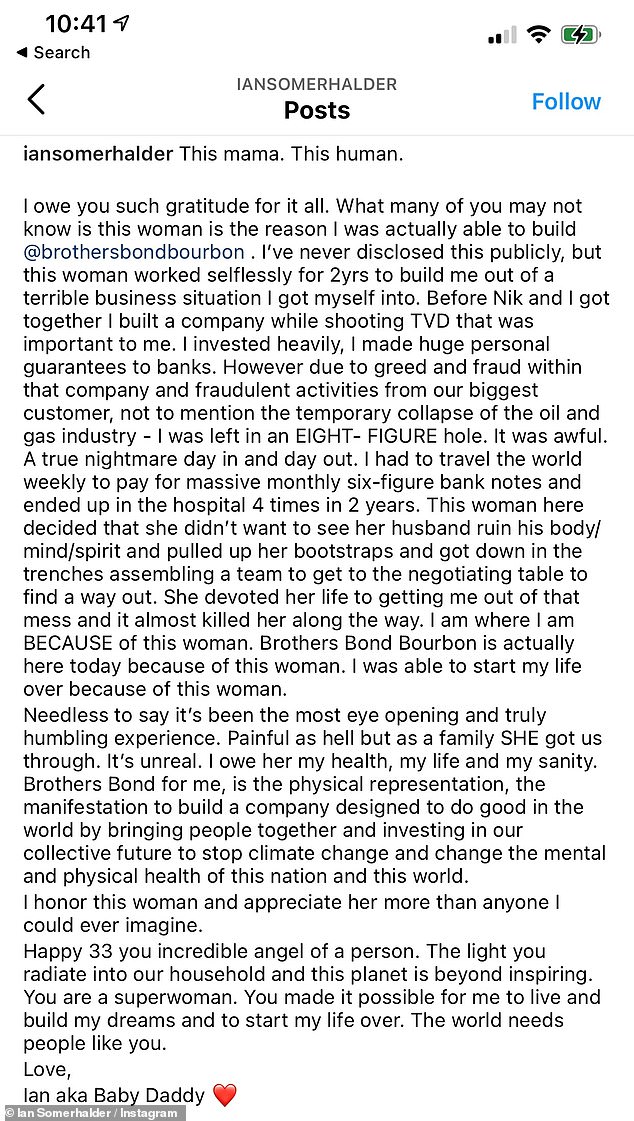 Taking charge: The former Vampire Diaries star maintained Reed put in two-years worth of effort to help him recover from debt that mounted to at least $10 million

It turns out Reed, who’s best known for playing Rosalie Hale in the Twilight film franchise (2008-2012), was able to put a financial plan in place, but not without paying a price with her own well-being.

‘This woman here decided that she didn’t want to see her husband ruin his body/mind/spirit and pulled up her bootstraps and got down in the trenches assembling a team to get to the negotiating table to find a way out. She devoted her life to getting me out of that mess and it almost killed her along the way,’ he confessed. 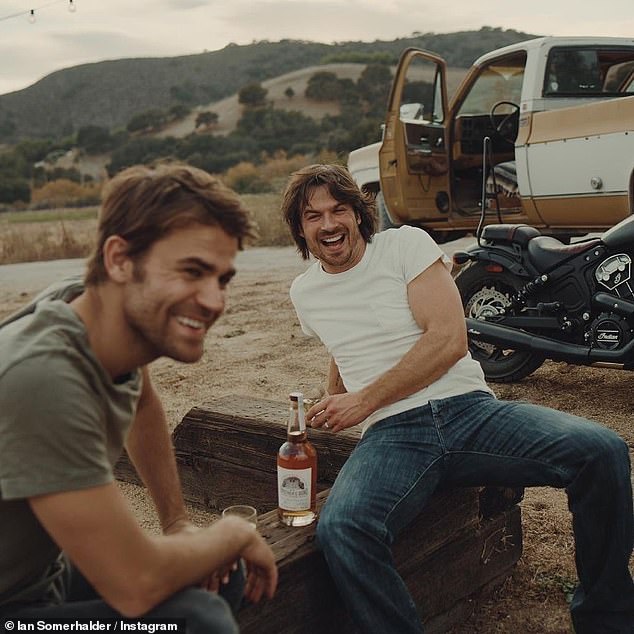 Grateful: Somerhalder, 42, declared his Brothers Bond Bourbon company with TVD co-star Paul Wesley, would not exists today if it weren’t for his wife’s efforts 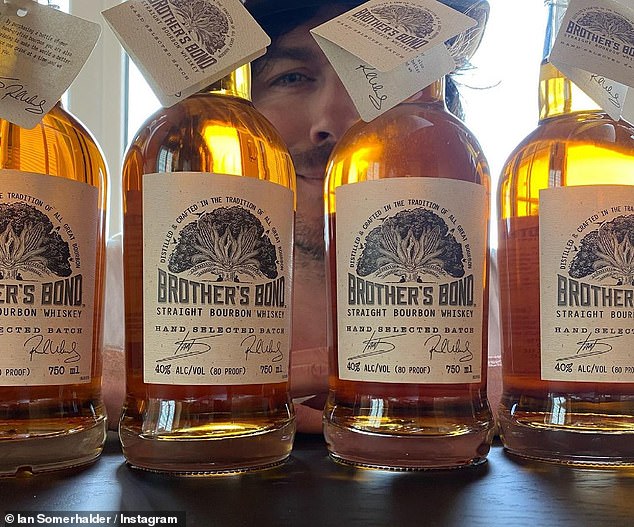 Confession: ‘I was able to start my life over because of [my wife]’ the actor explained

In retrospect, the Lost star described the ordeal as being ‘the most eye opening and truly humbling experience’ of his life.

‘Painful as hell but as a family SHE got us through. It’s unreal. I owe her my health, my life and my sanity.

After sharing some of the motivation for starting Brothers Bond Bourbon, he directed his praise back to Reed, who celebrated her 33rd birthday on May 17.

‘I honor this woman and appreciate her more than anyone I could ever imagine. Happy 33 you incredible angel of a person. The light you radiate into our household and this planet is beyond inspiring. You are a superwoman. You made it possible for me to live and build my dreams and to start my life over. The world needs people like you. Love, Ian aka Baby Daddy,’ he concluded the post.

The couple reported started dating in mid-1024, and eventually went on to wed in April 2015.

They welcomed their three-and-a-half-year-old daughter, Bodhi, in July 2017. 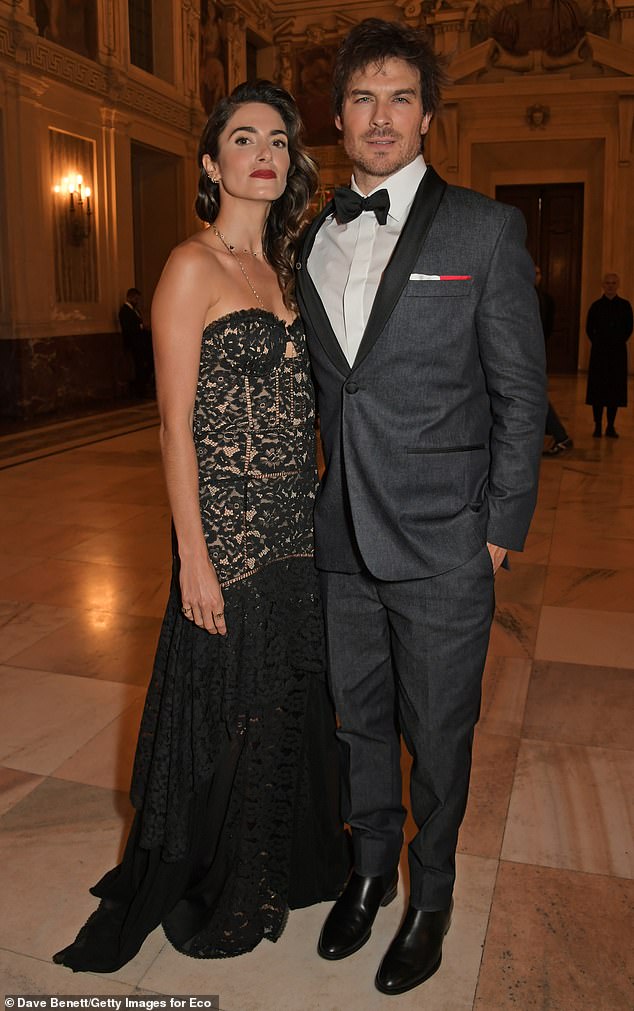 Going strong: Somerhalder and Reed were married in April 2015, and welcomed their daughter Bodhi just over two years later;  the couple are seen together in Milan, Italy in September 2019