Claire Sweeney put on a busty display as she rocked a stylish all-white pant suit on Saturday night.

The 50-year-old looked sensational as she enjoyed a night out to see Cabaret All Stars Presents Duncan James in London.

She opted for a figure-hugging white embroidered ensemble, which boasted a double-breasted jacket which statement shoulder pads, for the fun outing.

Stylish: Claire Sweeney, 50, put on a busty display as she rocked an all-white pant suit while heading to see Cabaret All Stars Presents Duncan James in London on Saturday

Claire gave fans a glimpse of her cleavage in the tight-fitting top, which matched the pattern on her suit.

Creating the perfect silhouette, her suit jacket blew out at the hips and her wide-leg trousers complimented her sizzling body shape.

The blonde beauty wore a pair of open-toe high heels, which sneaked a glimpse of her manicured red toenails. 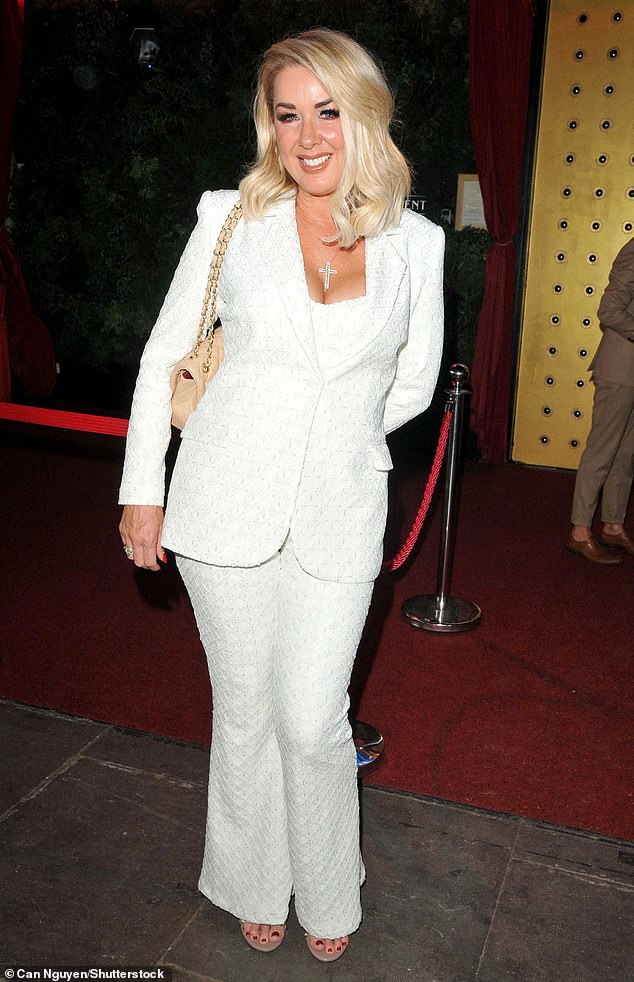 Glam: The Brookside actress opted for a figure-hugging white embroidered suit, including a double-breasted jacket, for the outing

Completing her glamorous look, Claire wore her enviable blonde tresses in a side parting with a light wave to the ends and wore a simple makeup look.

Her appearance comes after she admitted she had a ‘wobble’ and ‘freaked out’ when she turned 50 on April 17 as she discussed having a ‘really hard time’ over the last year amid lockdown.

The former Brookside actress who is the mother to son Jaxon, six, said that despite the challenges of the past year, she ‘couldn’t be happier’.

Speaking to OK! magazine from her four-bedroom house in Pimlico, central London, Claire said of turning 50: ‘I have friends saying, ‘Embrace it,’ but I’m having a right old wobble. It suddenly seems old, but I know it’s not because I feel great.’ 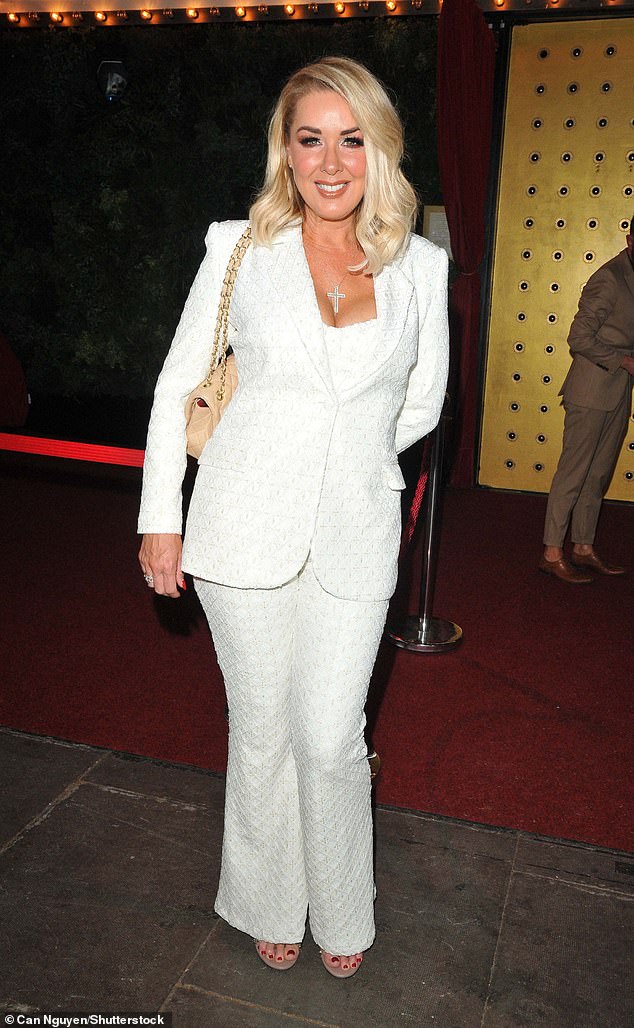 Chic: Creating the perfect silhouette, Claire’s suit jacket blew out at the hips and her wide-leg trousers complimented her body shape 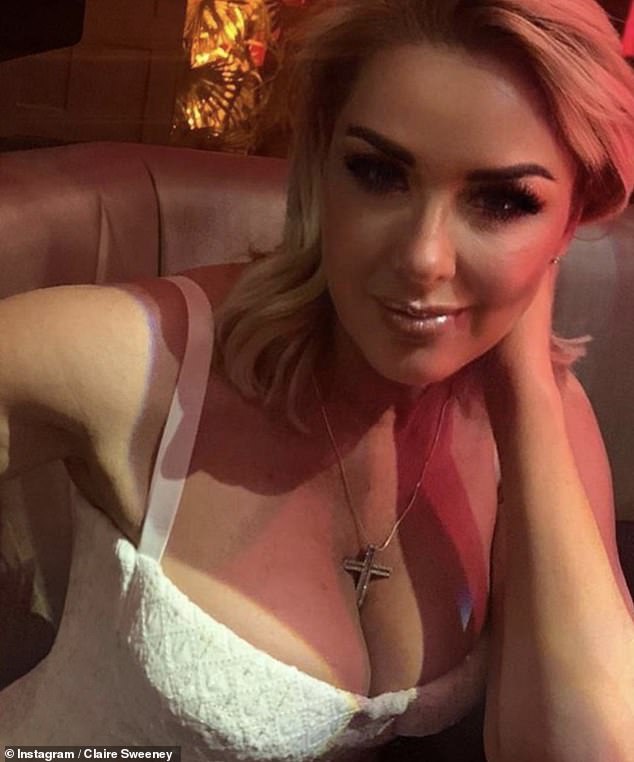 Sizzling: The blonde beauty also shared a stunning selfie to Instagram during the night, showing off her very ample assets in a corset-style top

The Scarborough actress said she is more comfortable with herself now then ever before as she counted her blessings, including her son, in the interview.

Claire gave birth to her only child in September 2014, whom she shares with her former fiancé Daniel Reilly.

After giving birth in her early 40s, she said she is glad she waited to have a baby later in life so that she could fulfill her goals and tick off most of her career checklist.

However, Claire admitted it hasn’t been plain sailing with her son during the pandemic, especially with homeschooling.

Reflecting on lockdown, she added: ‘Part of me has enjoyed it. There were moments when I struggled, of course, like with homeschooling.’ 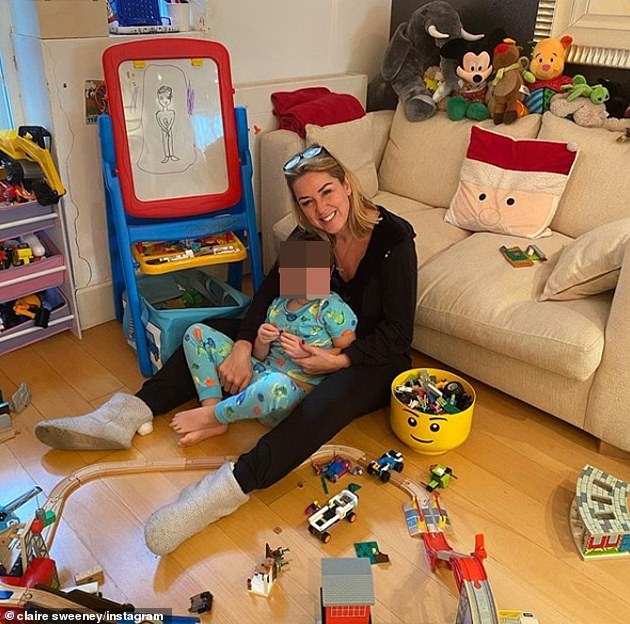 Tricky times: The star, who is the mother to son Jaxon, six, recently revealed that despite the challenges of the past year, she ‘couldn’t be happier’

‘I have so much respect for his teacher. I messaged her one day saying, “I’m crying and he’s crying. We’ve been fighting. What do we do?'”

She added that there were times she and her son ‘locked horns’ and that homeschooling caused ‘too much disruption’.

Aside from her parenting challenges, Claire said that the past year was ‘really hard,’ for those in the TV and entertainment industry due to a lack of work.

According Claire, she has barely worked after her pantomime was cut short due to lockdown. Nevertheless, she is now looking forward to the future after landing a new presenting gig on BBC Radio Merseyside.

She described the new opportunity as a ‘godsend,’ not just financially but also due to the enjoyment it gives her. 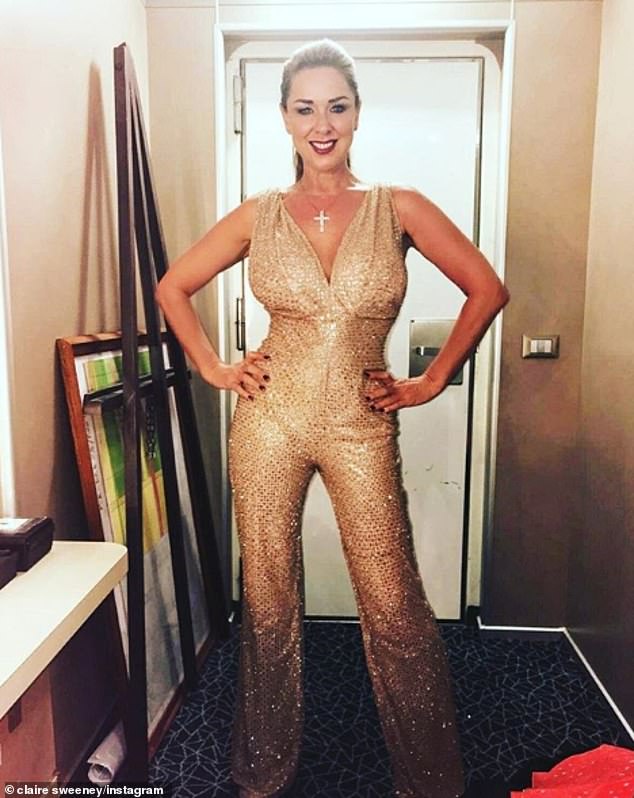 Brave face: Claire admitted she had a ‘wobble’ and ‘freaked out’ when she turned 50 on April 17 as she discussed having a ‘really hard time’ over the last year amid lockdown

NOT THE END Lyrics – HIGHLIGHT

SEX TO ME Lyrics – CHARLOTTE CARDIN