And Sofia Richie posted a gallery of snaps of herself posing up a storm in a purple string bikini on Instagram on Monday.

The model, 22, looked stunning in the images, taking in front of an impressive backdrop, as she threw her arms up in the air. 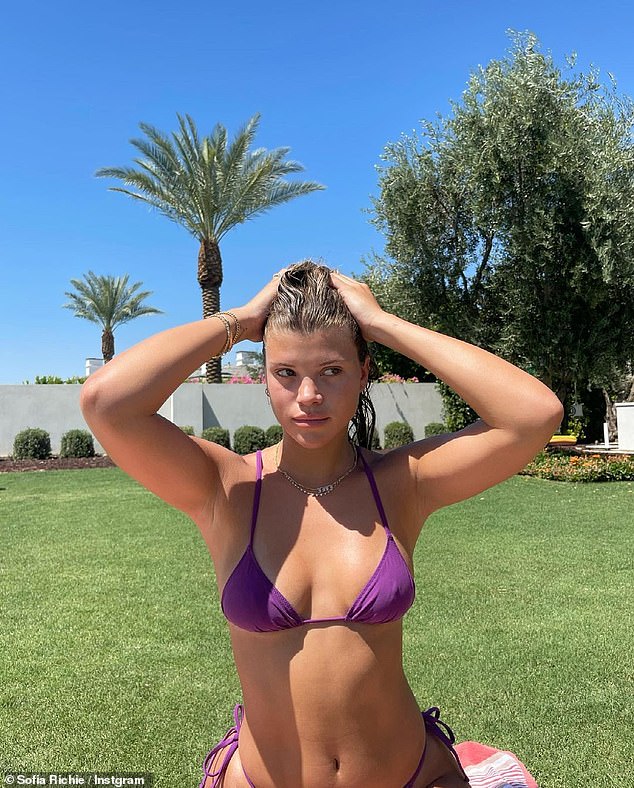 Hot to trot: She ran her hands through her wet hair after enjoying a refreshing dip in the pool

Sofia is currently away with a group of friends and looked naturally beautiful as she emerged from the water with her wet hair slicked back.

She accessorised with a series of necklaces as she smiled for the camera.

The day before, Sofia was seen enjoying the start of summer as she slipped into a tiger print bikini and relaxed by the pool before showing off her core strength with acrobatic antics on Instagram. 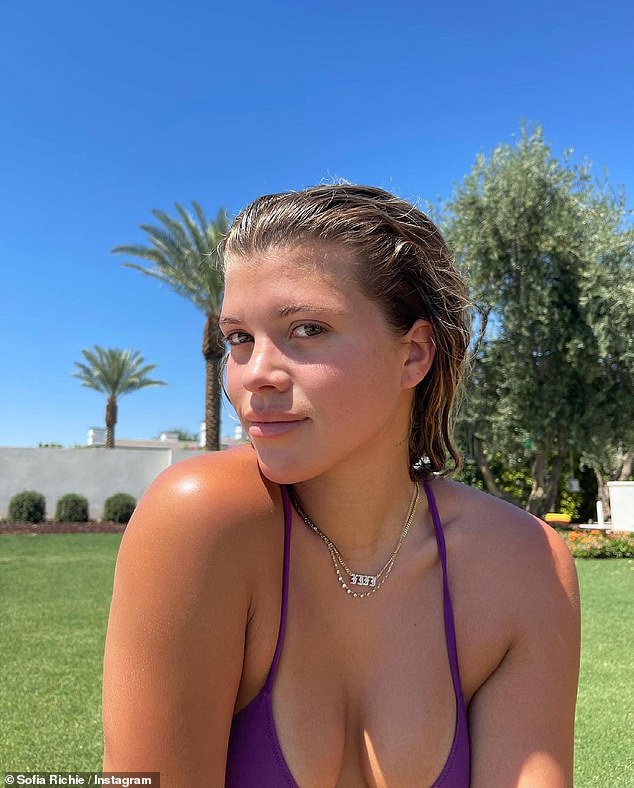 Natural beauty:  Sofia is currently away with a group of friends and looked naturally beautifulwith her wet hair slicked back.

The daughter of Lionel Richie seemed to splash out on a rental property at the super exclusive Madison Club, and she wished her 6.6M followers a ‘happy long weekend’ with a sun-kissed selfie.

Sofia softly smiled while sunbathing in a bikini, as she flashed ample cleavage and a hint of her flat stomach.

Her cheeks appeared a bit flushed from the desert sun so she shielded her face with a mint green baseball cap for a bit of protection.

The model appeared makeup free with her blonde locks down, and sported a delicate display of diamond necklaces.

And she later took to her story to show off her core strength as she expertly balanced her friend’s torso on her feet as they flexed their acrobatic skills. 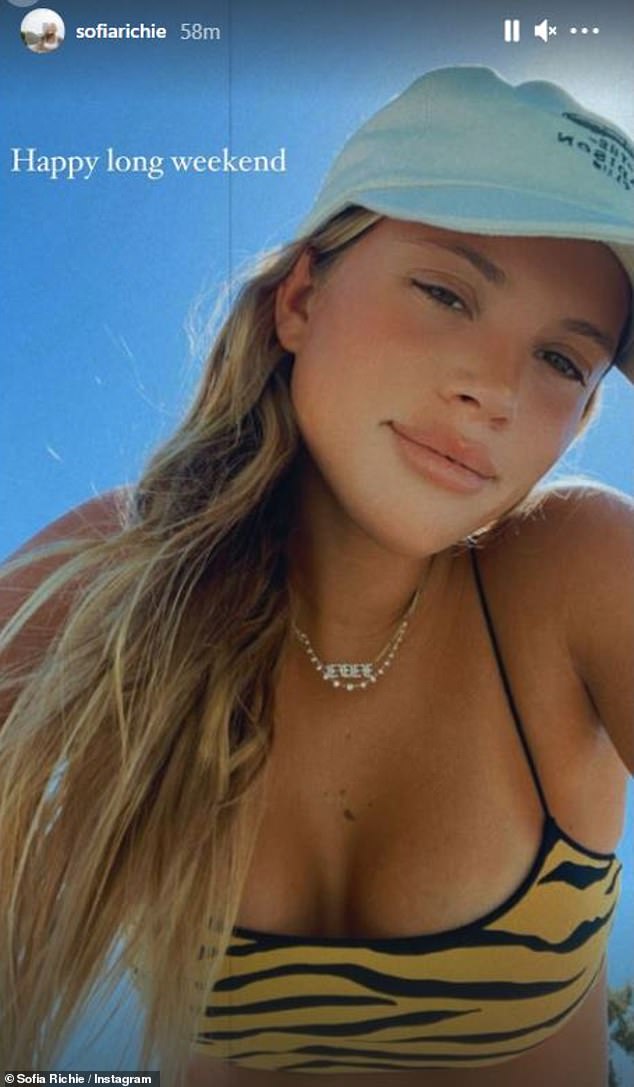 Holiday getaway: The day before, Sofia shared a sun-kissed selfie in a tiger print bikini as she escaped to Palm Springs for the holiday weekend with pals 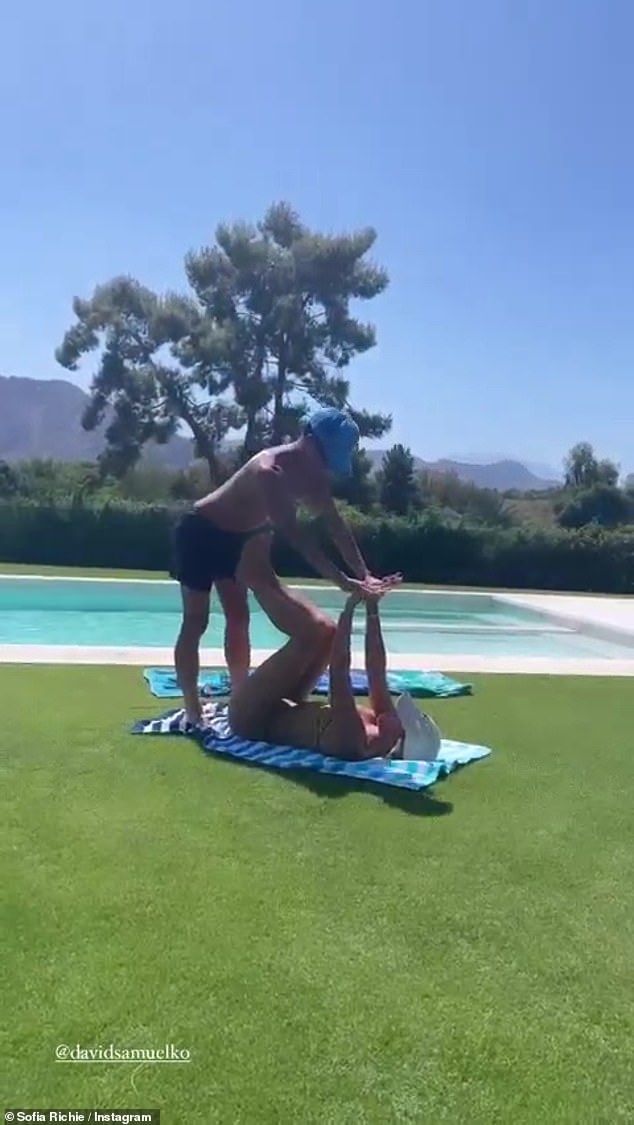 Poolside antics: Sofia took to her story to show off her core strength as she expertly balanced her friend’s torso on her feet 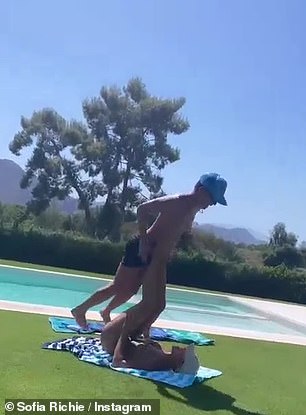 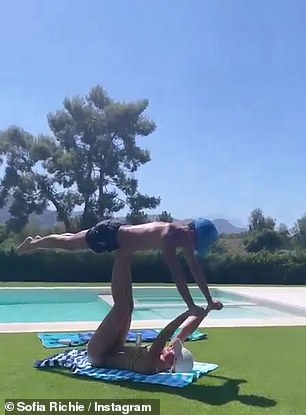 Liftoff: The model was seen lying on her back as she engaged in some acrobatic attempts before getting the move right 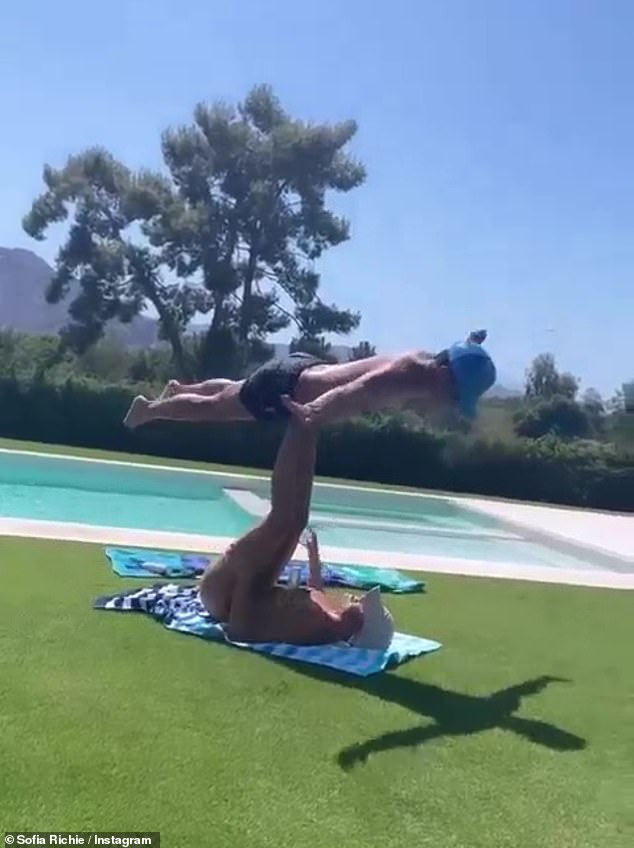 No hands: The friends took a break from sun bathing at their swanky digs adjacent to the Madison Club

After a few attempts the influencer was able to get the positioning right and her friend looked to have every bit of faith as he balanced on top of her without hands.

It could be assumed that amongst her tight group of friends, new boyfriend Elliot Grainge, 27, was also present on the holiday getaway.

Pregnant Stacey Solomon shows off a hint of her baby bump

Sofia confirmed her relationship with the music executive — the son of Universal Music Group CEO Lucian Grainge — in March as she shared a mirror selfie of the pair.

The couple have continued to grow closer and reports have said that the relationship is ‘getting serious.’ 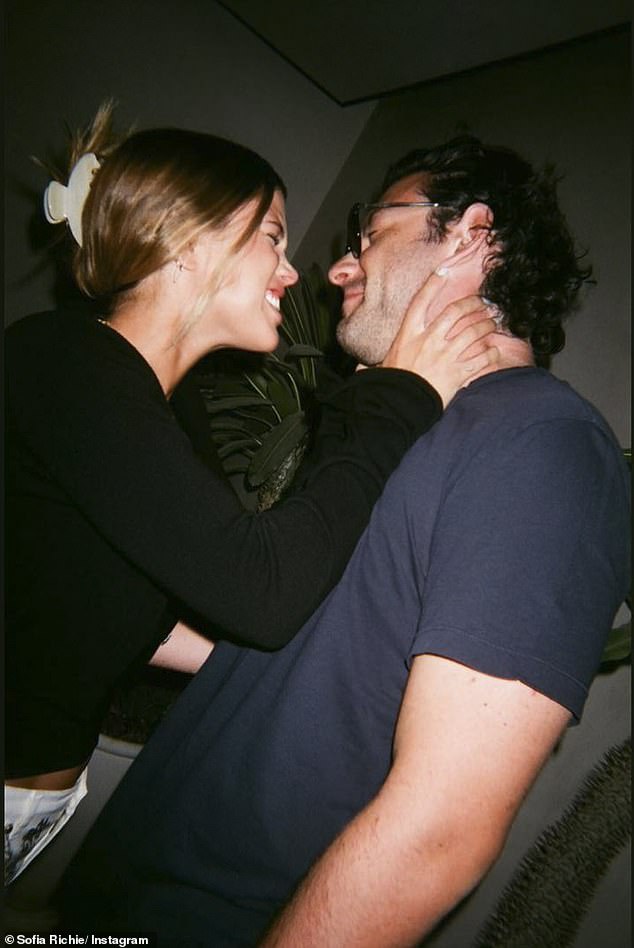 New relationship: Sofia and the music executive, 27, have been an item since 2021 and have enjoyed many romantic vacations together 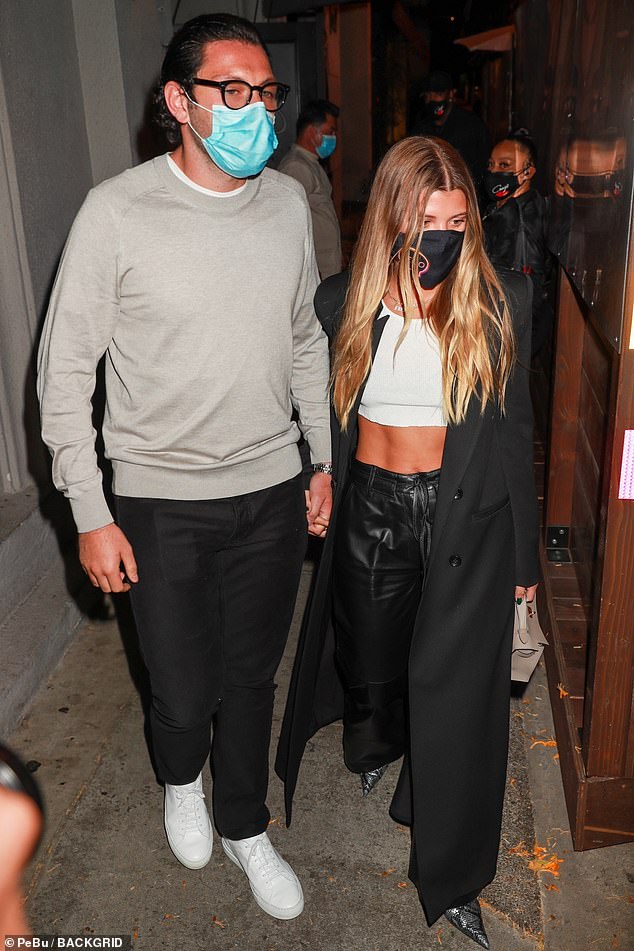 Close call? The new pair were spotted at Kendall Jenner’s 818 Tequila launch despite cutting ties with Kourtney Kardashian and Disick following the split; pictured May 18

‘They started out as friends before they became a couple, and are now getting serious,’ an US Weekly insider said. ‘Their relationship took off and they have been getting closer and closer and spend practically every day together.’

On the same day her ex Scott Disick turned 38, Sofia and Elliott were spotted house hunting together in LA.

And as the Talentless designer has officially moved on with much younger model, Amelia Gray Hamlin, 19, who posted a gushing tribute to her ‘love,’ on his special day after gifting him a Harley Davidson.

‘happy birthday my love. you light up my life, and make my world better. i can’t imagine what i would do without you. thank you for being you. the most caring, loving, special person on this planet. i’m so lucky. i’m so blessed to have met you. i love you,’ Hamlin wrote. 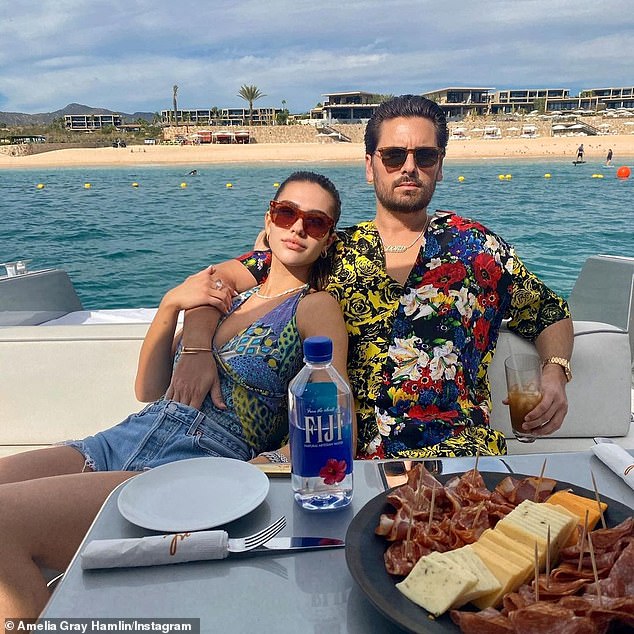 Moving on: The Talentless designer has officially moved on with much younger model, Amelia Gray, 19, who posted a gushing tribute to her ‘love,’ on his special day after gifting him a Harley Davidson