Rachel Brosnahan is bold in head-to-toe burgundy on the set of The Marvelous Mrs. Maisel in NYC

Rachel Brosnahan slipped into a head-to-toe burgundy ensemble for another day on the set of Marvelous Mrs. Maisel in New York City.

The cast and crew have been glimpsed shooting season four both upstate and in the city for the last few months, but no release date has been revealed yet.

She put her figure on display in a structured burgundy top with a matching pencil skirt, throwing a tweed coat with leather trimming over the look.

Sticking with the expertly curated monochrome look she donned red heels with button detailing on the toe and a checkered pillbox hat.

Rachel held an elegant purse as she was seen removing a wallet for one scene, before filming a few action shots around the city. 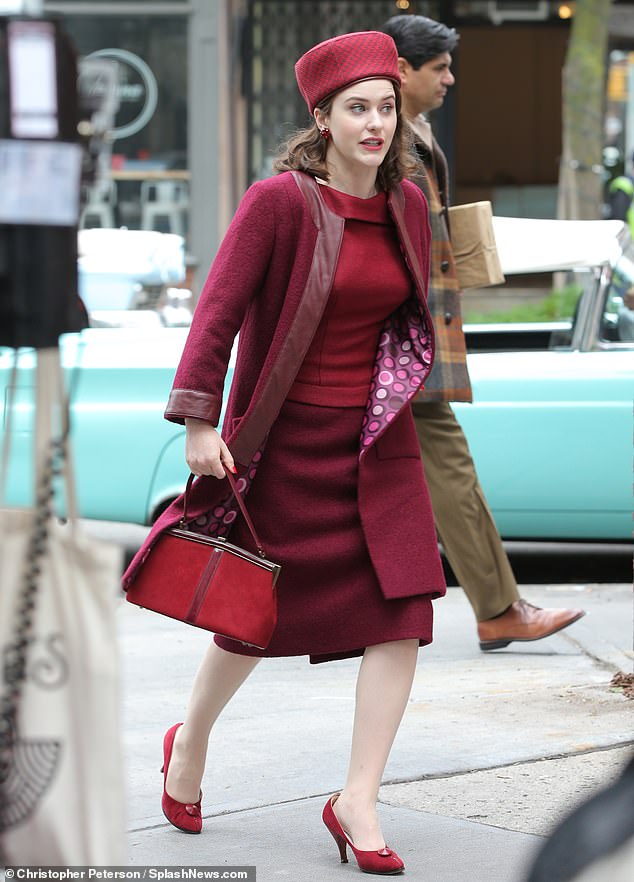 Walk and talk: The shoot featured a few walking scenes as Rachel made her way near extras in full wardrobe 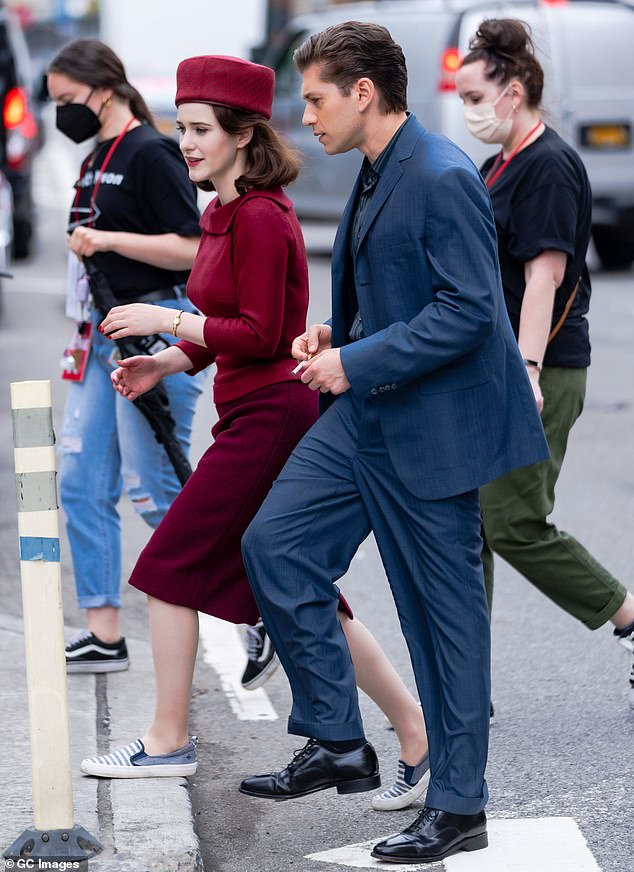 On-screen interest: In other scenes she was glimpsed with Zegen who plays her husband Joel, who was dressed in a full navy suit with a black dress shirt 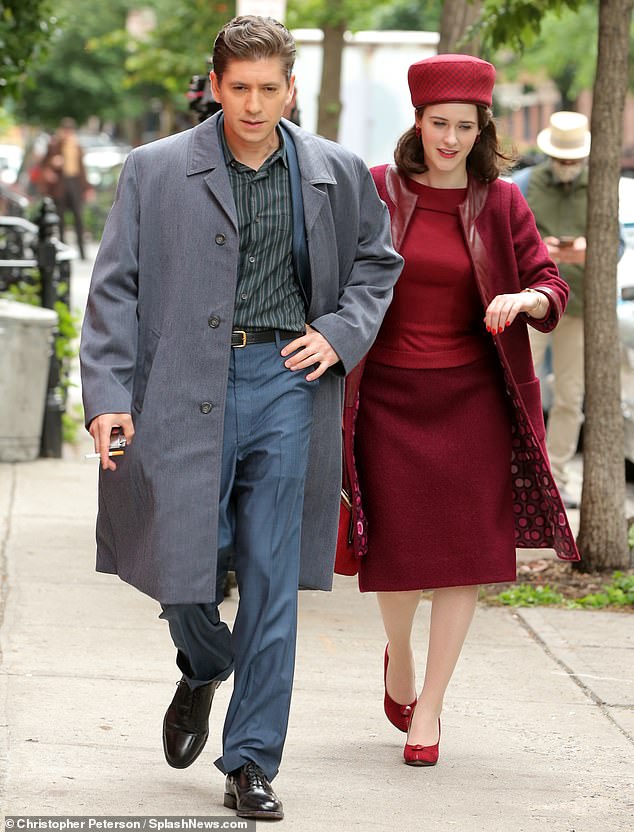 Private street: The cast was surrounded by production crew who roped off special areas for unfettered filming

In other scenes she was glimpsed with Zegen who plays her husband Joel, who was dressed in a full navy suit with a black dress shirt.

He smoked a cigarette on camera in a few shots before the pair later posed for a few photos against a red wall decorated with flyers.

She was seen giving her feet a rest in between takes as she traded her heels for a pair of slip on sneakers.

The actors were surrounded by a bevy of production personnel who were seen providing touch ups and securing the shooting areas with equipment. 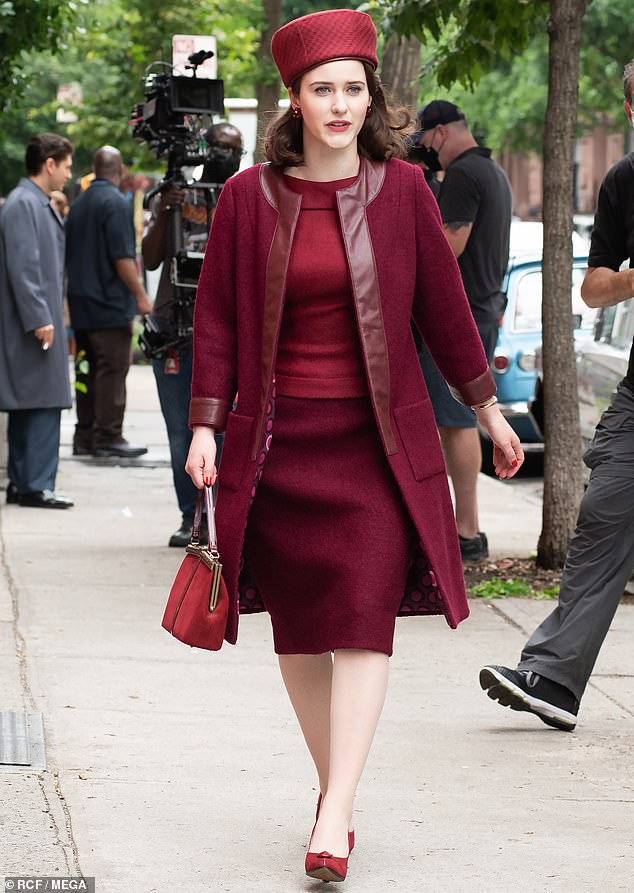 Posed shots: The on-screen couple was seen posing by a brick wall that was decorated with flyers

Other extras in timely wardrobe were also seen milling about in the background in order to fully transport viewers back in time.

This season will continue to follow Midge as she pursues her comedic dreams with help from Alex Borstein who plays her talent agent and confidant Susie.

Both actresses have received praise and accolades for their on-screen roles, with Rachel snagging an Emmy, a Golden Globe and two Screen Actors Guild awards.

The show continues to shoot with strict COVID-19 protocol, and Rachel has been seen with a HEPA-filter umbrella which she’s lovingly dubbed ‘Cobrella.’

‘We’re also all tested every day and have a multitude of other measures in place to keep everyone safe. So, while certain things take more time than they used to and we miss hugs, we’re all incredibly grateful to be back at work and especially in a workplace that has prioritized our well-being,’ the Milwaukee native told The Hollywood Reporter. 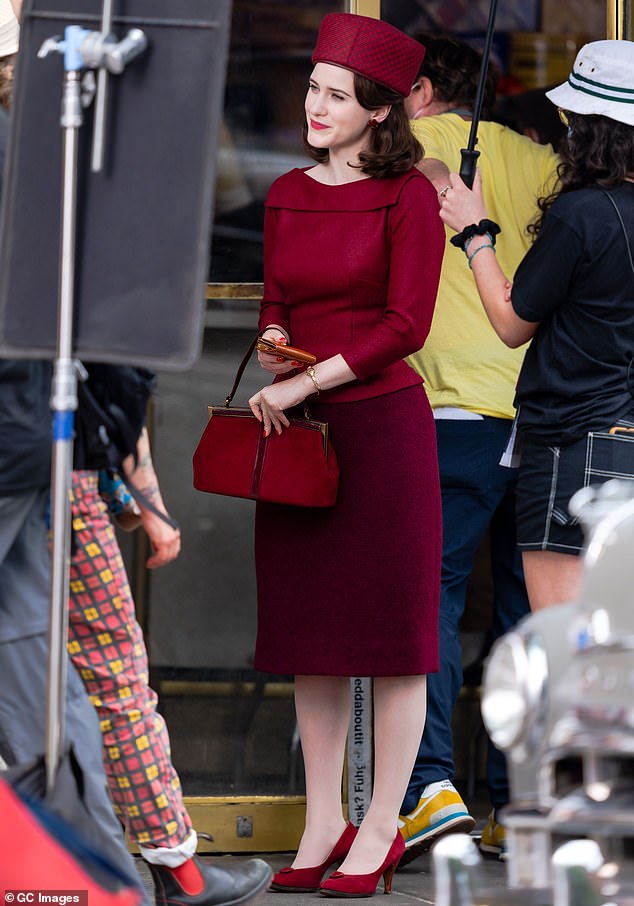 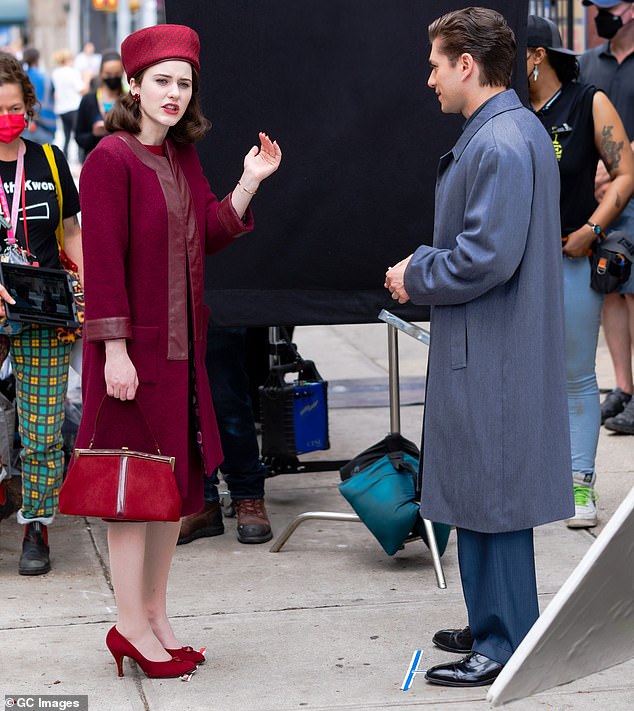 Covid-19 protocol: The show continues to shoot with strict COVID-19 protocol. Rachel has been seen with a HEPA-filter umbrella which she loving dubbed ‘Cobrella’

A SONG FOR EVERYTHING Lyrics – MAREN MORRIS