Pop music has been my obsession since my teens. All through my youth, and then throughout my adult life, I’ve been listening to pop when I should have been doing everything else.

Not all pop, of course. No one hates more music than the person who really loves music. I only have to hear the opening chords of Light My Fire by The Doors, or anything by The Velvet Underground, to run screaming from the room.

It’s these prejudices, more than the enthusiasms, that make me want to write about pop. Who wants to know about the good stuff?

George Harrison, for instance, was a sweet man and a brilliant songwriter, but the only truly interesting piece of trivia about him is this: after he died, a tree was planted in his memory and it was eaten by beetles.

And though I was genuinely overawed to meet Sting, there’s nothing remotely interesting to be written about his music compared to his enormous ego and his tendency to hang out on chat shows with Amazon tribesmen.

Here, from my new book of pop miscellany, I haven’t chosen the most famous or talented — and certainly not the most likeable. But they are, I think, the most interesting…

Elvis sang Love Me Tender, the audience applauded politely — and he came third

One night in the late 1950s, Lil Thompson’s Steakhouse in Tennessee held an Elvis Presley impersonator contest. The great man heard about it, turned up with his entourage and sat quietly at the back. No one recognised him, so he decided to take part. ‘I’m going to smash this,’ said Elvis.

Lil was worried that everyone would go mental when they realised who the newcomer was, but nothing of the sort took place. Elvis sang Love Me Tender, the audience applauded politely — and he came third. 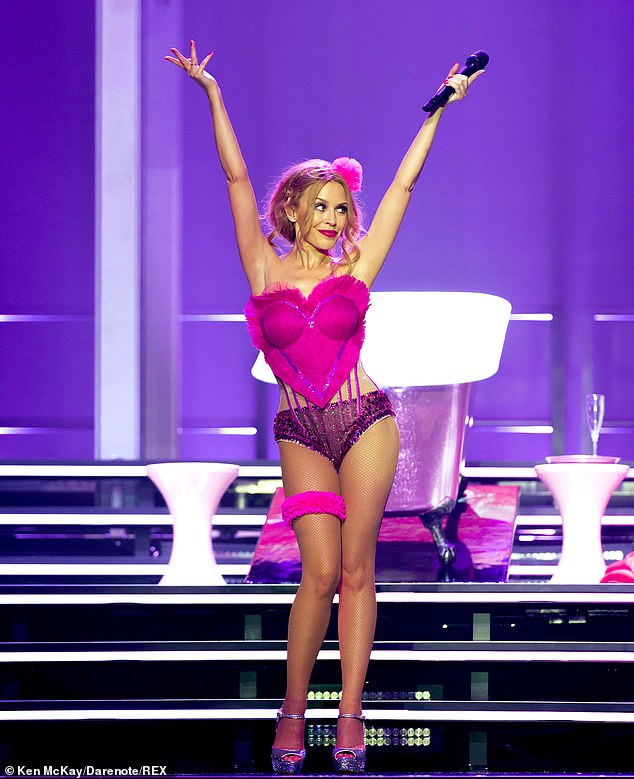 Kylie Minogue Kylie at The Liverpool Echo Arena, 2014 Kiss Me Once Tour. She is one year older than the Tory MP

One day in 1965, singer Billy J. Kramer (who shared a manager with The Beatles) asked Paul McCartney if he had written anything good recently, something suitable for him to release as a single. ‘Yes, actually,’ said McCartney, who picked up his guitar and played a little tune he’d recently knocked together. ‘Yesterday,’ he sang, ‘all my troubles seemed so far away.’

Kramer thought about it, and said: ‘No.’

John DENVER wrote his most successful song, Annie’s Song, about his wife, in ten minutes on a Colorado ski-lift after the couple had had an argument. In 1982, John and Annie were divorced, and their battles over property distribution became so antagonistic John took a chainsaw to their marital bed and cut it in half.

On their third U.S. tour in 1965, the Rolling Stones were staying in a motel in Florida. Keith Richards called Mick Jagger to his room and played him a guitar riff that had come to him in a dream. He had woken up in the middle of the night, switched on the tape machine he kept next to his bed and recorded it. On the tape you could hear him drop the plectrum and the rest of the tape was Keith snoring. Something else had come to him in the dream as well.

‘The words that go with this are “I can’t get no satisfaction”,’ said Keith. The record was in the shops exactly three weeks later. 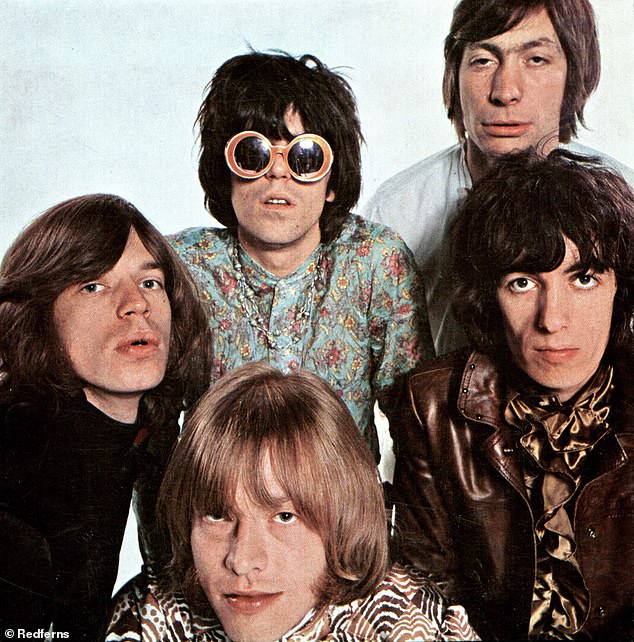 Ozzy Osbourne’s father used to have his milk delivered by Noddy Holder.

The first film Yoko Ono made with John Lennon was Smile, which featured John in his garden, sticking out his tongue and wiggling his eyebrows, in super-slow motion, for 52 minutes.

It was premiered at the 1968 Chicago film festival, and halfway through only half the audience were still in their seats. Yoko wanted to make a four-hour version, but it was not to be. 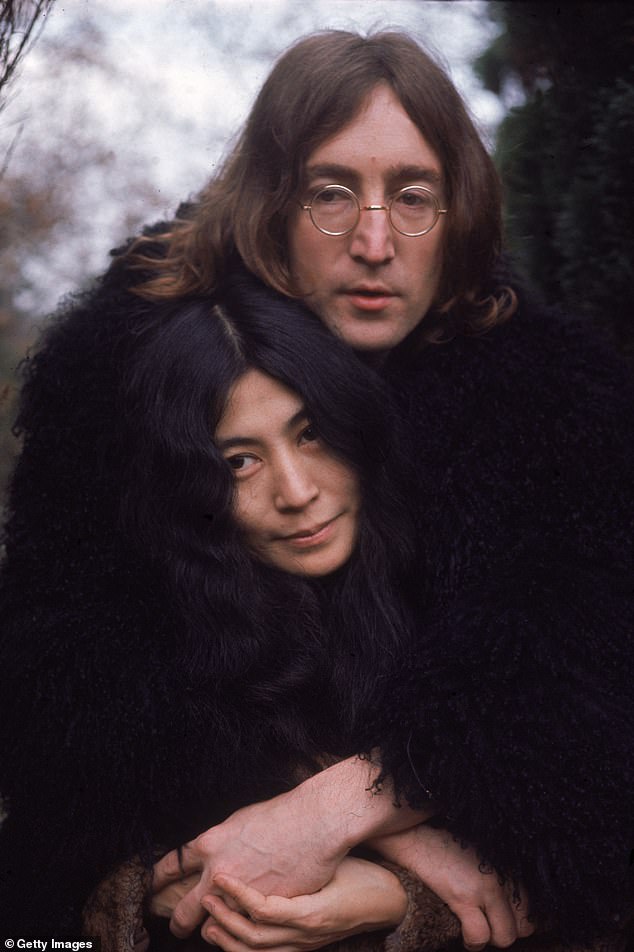 The first film Yoko Ono made with John Lennon was Smile, which featured John in his garden, sticking out his tongue and wiggling his eyebrows, in super-slow motion, for 52 minutes

When Leonard Cohen’s first album came out in 1967, the New York Times reviewed it under the headline ‘Alienated Young Man Creates Some Sad Music’.

The group looked round for new representation and Robert Stigwood, later the manager of the Bee Gees, paid them a visit. So Arden paid Stigwood a visit.

‘There was a large ashtray on the table,’ he said. ‘I picked it up and smashed it down with such force that the table cracked. Two of my men lifted Stigwood from his chair, dragged him to the balcony and held him so he looked down to the pavement four floors below.’

Later Arden adjusted his story. ‘It was only one floor,’ he said.

Unfettered by good looks, charm or a reasonable speaking voice, Bill Wyman, the Rolling Stones bassist, was nonetheless the band’s most prolific shagmeister.

In his memoir he recounted the tale of a band meeting in 1965 at which they tallied up their conquests in the two years since the Stones started: ‘I’d had 278 girls, Brian (Jones) 130, Mick (Jagger) 30, Keith (Richards) six, and Charlie (Watts) none.’

After he went on ITV’s Oh Boy! in 1957, the NME wrote this about 17-year-old Cliff Richard: ‘His hip-swinging was revolting, hardly the kind of performance any parent would wish their children to see. He was wearing so much eye-liner he looked like Jayne Mansfield.’

After a show in 1965, a used-car salesman approached Frank Zappa and offered him $100 for an audiotape of the musician having sex, for a stag party. Zappa took up the offer. He spent the night with one of his go-go dancers, faking the whole thing, with bedsprings, grunts, sighs and squeaks. He said he spent hours cutting the laughs out of the recording.

Zappa delivered the tape but the salesman turned out to be an undercover cop from the vice squad. Zappa was arrested and charged with conspiracy to commit pornography. He served ten days in jail.

There was an unforeseen bonus to this adventure. His criminal record exempted him from being drafted, so Frank Zappa never had to go to Vietnam.

Olivia Newton-John’s grandfather was Max Born, a German-Jewish physicist who escaped to England with his family in the late 1930s from the Nazis and later won the Nobel Prize for research into quantum mechanics.

Her father was an MI5 officer on the Enigma project at Bletchley Park in World War II and took Rudolf Hess into custody.

The comedian Ben Elton is her third cousin.

The man with the sweetest voice in soul had a vicious, disciplinarian father. As a boy, Al Green had a pet goat called Billy, which kept getting loose. His father decided that both boy and goat needed to be taught a lesson. ‘We were having dinner one night,’ says Al, ‘and I’m thinking, “This stew tastes good, not like anything I’ve ever tasted before”.’

Al asked his mother what kind of meat was in the stew. She wouldn’t answer. Then his father collapsed with laughter. ‘At that moment I knew it was Billy I was eating. I’ve never eaten goat since.’

As Wembley Stadium filled before Live Aid, two empty seats in the Royal Box awaited the Prince and Princess of Wales. Paula Yates stood nearby, clutching a cellophane-wrapped bouquet of roses, ready to present them to the guests of honour. She had bought them at a garage on the Harrow Road. They still had the price sticker on.

At Live Aid in 1985, after Queen’s set stole the show, Elton John said to Freddie Mercury: ‘Freddie, nobody should go on after you. You were magnificent’.

‘You’re absolutely right, darling, we were. We killed them,’ said Freddie. ‘You, on the other hand, dear – you looked like the f*****g Queen Mother when you were on stage. Where did you get that absolutely awful hat?’

When Old Grey Whistle Test presenter Mark Ellen was at Oxford University, there were only three bands, and he was in one of them, Ugly Rumours. All they lacked was a singer, and a friend knew one Tony Blair who appeared in revue shows, so they asked him to audition.

‘The moment he arrived, wearing exactly the same boots as we had, he’d effectively got the job anyway. He had a folk-rock look about him — long hair with a fringe — and was keen, organised, quite posh, very funny and started a lot of sentences with the word “guys”.

‘The new five-piece Ugly Rumours began appearing on the party circuit, Tony emoting into a microphone. He adopted a courageous hoop-necked top that revealed several square inches of bare torso.

‘The only tensions in the band were the endless do-you-tuck-your-flares-into-your cowboy-boots debates, and the irritating sight of pretty girls in print dresses gathered around his mic stand.’

When the Undertones first started, Feargal Sharkey was the only member of the group with a job. He delivered and installed TVs for Radio Rentals.

The sanest of the Jackson siblings (though that obviously isn’t saying much), Janet has had her septum pierced as well as her navel, her nipples — as revealed by her Super Bowl ‘wardrobe malfunction’ with Justin Timberlake — and what she calls ‘down south’. She presumably clanks when she walks. One nostril has also been pierced, ‘for a spiritual reason which I don’t talk about’.

The Art of adding

After the break-up of Simon and Garfunkel in 1970, Art briefly took a job as a maths teacher. ‘I’d just got married and moved to Connecticut, and there was a nearby preparatory school and so I taught there.

‘It was a weird stage of my life, to leave Simon & Garfunkel at the height of our success and become a teacher. I would talk them through a math problem and ask if anyone had any questions, and they would say: “What were the Beatles like?” ’

One-time leader of the Bonzo Dog Doo-Dah Band and thoroughly rackety individual by any standards, Viv Stanshall once said: ‘If I had all the money I’ve spent on drink, I’d spend it on drink.’