Love Island 2021 has released its latest trailer, as sexy singletons flood the streets of London ahead of another summer of romance.

The preview, which will air on Saturday during The Masked Dancer final, sees host Laura Whitmore slip into a plunging red jumpsuit while Iain Stirling declares ‘this is not a drill!’ as a slew of bikini-clad beauties celebrate the show’s return.

As the trailer comes to a close, it confirms reports that the series, which is set to be filmed at the famous villa in Mallorca despite Covid restrctions, will return to ITV later this month.

She’s back! Love Island 2021 has released its latest trailer, as sexy singletons flood the streets of London ahead of another summer of romance (host Laura Whitmore is pictured)

The trailer begins with a pretty brunette dropping a bag of eggplants on the ground as host Laura Whitmore, clad in a sizzling red jumpsuit, sounds the alarm.

Laura, 36, looks sensational in the plunging ensemble and aviator sunglasses as she struts herself down the street with a group of sexy singletons chasing behind her.

An incredibly buff tradesman sets his sights on a stunning blonde in a figure-hugging dress, before a hunky waiter pulls her away.

A fireman attempts to hose himself down, while another hunk, rips off his vest to reveal his six-pack abs. 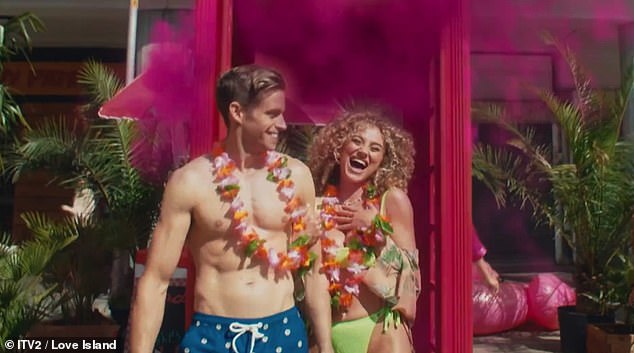 So hot they need to cool down! The preview, which will air on Saturday during The Masked Dancer final, also confirms the series will return to screens later this month 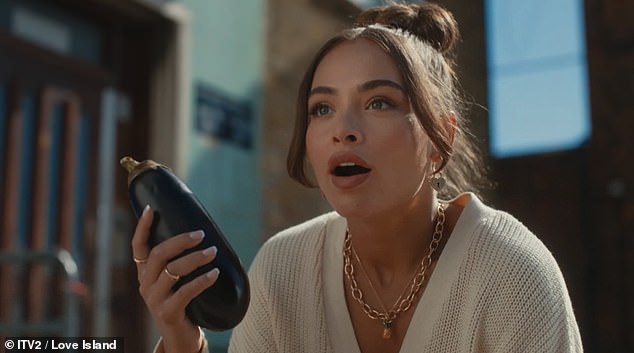 She’s got her hands full: In the preview, a pretty brunette drops a bag of eggplants on the ground as Laura makes her presence felt ahead of the show’s return

Things reach a climax when voice over artist Iain Stirling arrives in a red Jeep, and exclaims “This is not a drill!”

Series seven of the popular ITV2 show kicks off this June, with builders recently seen working at the Majorcan villa usually used for the show.

The new tag line for the show, “This is not a drill”, comes after last year’s season was postponed due to the pandemic. 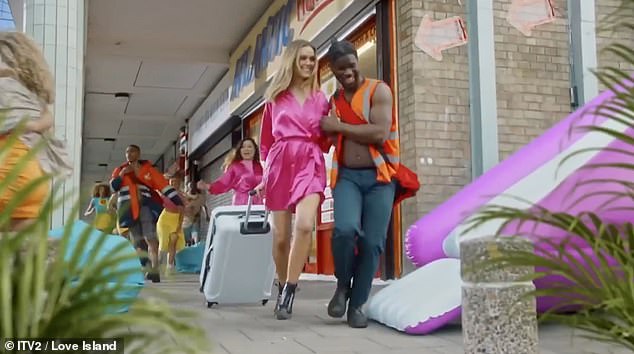 Whisking her away: An incredibly buff singleton in a tradesman uniform sets his sights on a pretty blonde 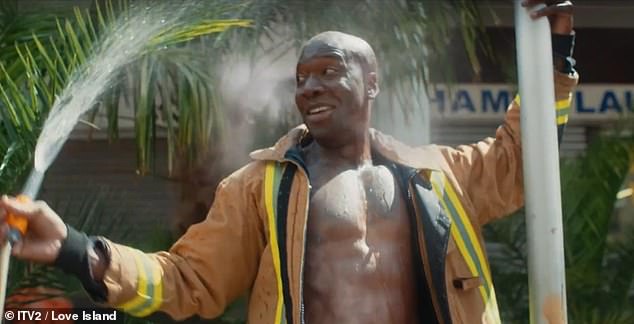 Too hot: While another buff singleton in a fireman’s jacket attempts to hose himself down

ITV have yet to make an official announcement about where the dating show will be filmed, though a source recently told The Sun: ‘Love Island bosses are determined to return to the villa this summer and have worked hard to make it happen.

‘Although they are confident the series will go ahead in the original location, there are still concerns over rules suddenly changing. However, at the moment it’s looking good.’

Signs are also on the site, according to eyewitnesses, speculating coronavirus safety measures.

Love Island has had ‘more applications than ever’ with over 1,000 singletons already interviewed amid the show’s current selection process for the 2021 series.

ITV commissioner, Amanda Stavri, teased the upcoming series in a new interview and revealed that the team are all ‘very pleased’ with the potential line-up.

Speaking to RadioTimes, the Love Island boss said: ‘There’s been more applications than ever. They’ve whittled it down and we’re all very pleased.

‘We’ve got a big sort of pool at the moment and we need to sort of work out who to put in the opening line-up and who sort of to hold back, you know as a bombshell – we need the bombshells.’

Elsewhere during the interview, the ITV commissioner promised the 2021 line-up will be ‘diverse and inclusive’. 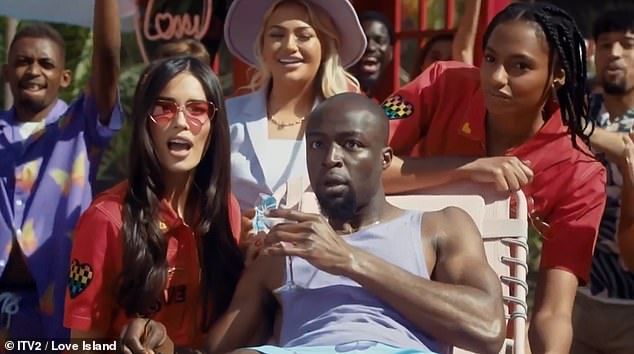 Spanish Prime Minister Pedro Sanchez recently confirmed that British holidaymakers can enter the country, which is currently on the government’s amber list, meaning that travel obstacles for the show have been lifted.

Contracts for this year’s Love Island did have Majorca written into them, although back-up options, such as Jersey and Cornwall, were on the table in case Covid travel restrictions meant Spain was off-limits.

Sanchez said at the Trade Fair Fitur in Madrid: ‘I am pleased to inform you that the ministerial order will be officially published today exempting citizens from the UK from temporary restrictions on non-essential trips to Spain. 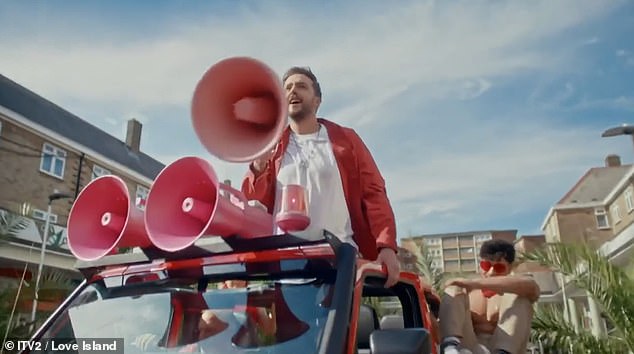 There he is! Things reach a climax when voice over artist Iain Stirling (pictured) arrives in a red Jeep, and exclaims “This is not a drill!” 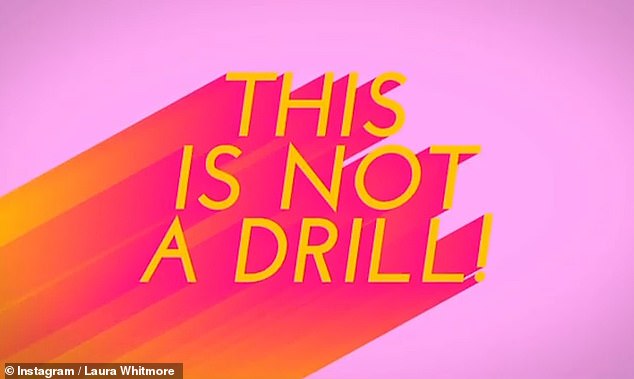 Eagerly awaited: The new tag line for the show, “This is not a drill”, comes after last year’s season was postponed due to the pandemic

‘I can therefore announce that from next Monday the 24th of May we will be delighted to welcome all UK tourists.

‘They are welcome to enter our country without restrictions and without health requirements.’

The summer series of Love Island 2020 was cancelled after production found it ‘logistically impossible’ to organise the show as the pandemic raged on.

Applicants for the next series have reportedly been told they’ll have to be free for 10 weeks abroad and undergo a psychological and physical assessment.

Love Island returns this June on ITV2 and ITV Hub, and The Masked Dancer Final airs tonight at 7:30pm on ITV and ITV Hub 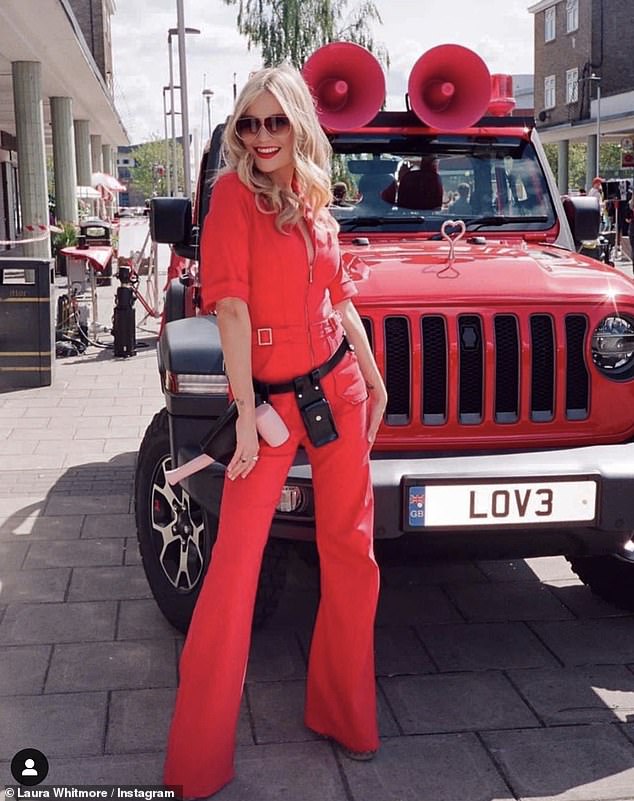 Tune in: Love Island returns this June on ITV2 and ITV Hub, and The Masked Dancer Final, tonight at 7:30pm on ITV and ITV Hub