Kyly Clarke has denied rumours she’s back together with her ex-husband Michael, telling The Morning Show on Monday they’re just good friends.

The mother of one, 39, clarified they haven’t reconciled, but emphasised how committed they are to co-parenting their five-year-old daughter, Kelsey Lee.

This is why the former couple looked so friendly while holidaying together in Sydney’s Palm Beach late last month, she said.

Setting the record straight: Kyly Clarke has addressed rumours she is back with ex-husband Michael, after the former couple were spotted on holiday in Sydney’s Palm Beach last month

Channel Seven host Kylie Gillies asked: ‘Do these reunion headlines just make your eyes roll, or is there something we need to know?’

Kyly responded by saying her ex-husband had pretty much settled the rumours when he spoke to KIIS FM on Friday.

The former Australian cricket captain, 40, had told The Kyle and Jackie O Show their weekend in Palm Beach was actually just a family trip and not a romantic getaway.

He also revealed the exes were ‘great friends’ despite their marriage split and that he still speaks to his ex-wife ‘almost every day’. 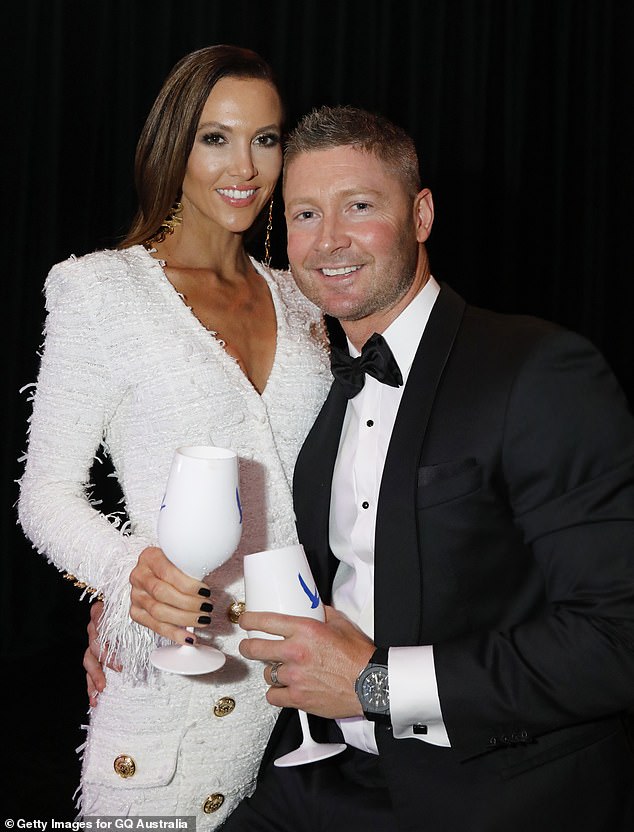 Rumours: The mother of one, 39, clarified on Monday they haven’t reconciled, but emphasised how committed they are to co-parenting their five-year-old daughter, Kelsey Lee. Pictured: Kyly and Michael Clarke on November 14, 2018, in Sydney

‘I think Michael said it all on Friday,’ Kyly told The Morning Show.

‘It was a family holiday and great opportunity to get everyone together,’ she added, noting that Michael’s sister and her husband were also present.

‘Kelsey Lee’s auntie, uncle and cousins were there, and I think like with anything you try to prioritise your daughter, and she really had a ball’ she said.

Michael and Kyly’s denials come after his ex-girlfriend Pip Edwards seemingly confirmed the exes were back together last Wednesday.

Pip, who dated the retired sportsman for about seven months while the Clarkes were separated, briefly addressed the pair’s weekend getaway at Australian Fashion Week.

When the conversation turned to Michael and Pip, the 41-year-old P.E Nation founder smiled and said ‘I wish them well’ before making a quick exit with her entourage.

Michael and Kyly split in September 2019 after seven years of marriage, but didn’t reveal their break-up until February 12, 2020.

In an statement at the time, the Clarkes said the ‘amicable’ decision to separate was ‘the best course’ for their daughter, Kelsey Lee.

Shortly after ending his marriage, Michael began dating Pip, with whom he’d been friends for more than a decade.

However, these relationships didn’t last: Michael and Pip called it quits in February after dating for about seven months, while Kyly and James broke up in December.