By Justin Enriquez For Dailymail.com

Amber Heard has revealed that she has welcomed her first child via surrogate.

The 35-year-old actress took to Instagram to share a snap of herself cradling her daughter with a lengthy caption about wanting to have a child  under her own conditions.

She captioned the snap to her 3.9million followers:  ‘I’m so excited to share this news with you. Four years ago, I decided I wanted to have a child. I wanted to do it on my own terms.’

Surprise! Amber Heard has revealed that she has welcomed her first child

She also revealed that she has named the child Oonagh Paige Heard as the first name is of Scottish origin and means pure and holy. The child was born on April 8, 2021.

According to Page Six on Thursday, sources close to Heard claim that she welcomed the child via surrogate after being told that she would never being able to carry her own baby.

The revelation comes five years after filing from divorce from actor Johnny Depp as the two have been embroiled in a bitter court battle ever since. 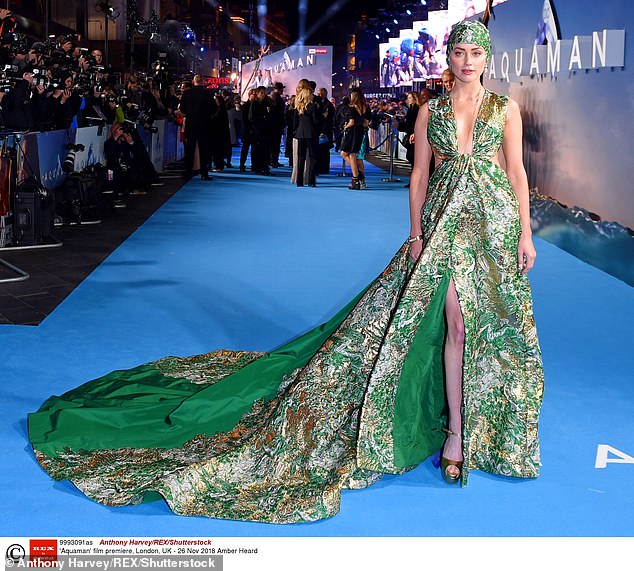 She continued in the caption by bringing up her personal life as she wrote: ‘A part of me wants to uphold that my private life is none of anyone’s business. I also get that the nature of my job compels me to take control of this.’

Amber stressed the importance of women being able to become parents regardless of marital situation.

She wrote: ‘I now appreciate how radical it is for us as women to think about one of the most fundamental parts of our destinies in this way

‘I hope we arrive at a point in which it’s normalized to not want a ring in order to have a crib.’

She concluded the post by saying: ‘She’s the beginning of the rest of my life.’

The insider for Page Six explained that it was important for Amber to be transparent when it comes to the birth of her child.

The source said: ‘The most important thing for Amber is that she’s open about Oonagh’s birth.

‘There are so many women who feel they can’t talk about their fertility and are worried and embarrassed; Amber wants them to feel supported and realize that there are a multitude of ways to have a baby even if you have fertility issues.’

The insider who knows Amber said that the star is thankful for the woman who was her surrogate and helped her fulfill her goal of being a mother.

The source explained: ‘Oonagh is absolutely gorgeous, and Amber is besotted. She always knew that she wanted to be a mom, and this is her greatest wish come true. She’s so grateful to the wonderful woman who helped bring Oonagh into her life.’