Stacey Solomon has announced that she is pregnant with her first daughter.

The Loose Women panellist, 31, shared the happy news with her fans in a sweet gender reveal picture on Friday after having an ’emotional’ ultrasound scan alongside her fiancé Joe Swash.

Stacey – who already shares son Rex, two, with Joe, as well as Zachary, 13, and nine-year-old Leighton from previous relationships – looked radiant in a pink dress as she sat on her beau’s knee while posing next to pink balloons.

Happy! Stacey Solomon announced that she is pregnant with her first daughter with a sweet gender reveal snap on Friday

She wrote in the caption: ‘Baby Girl! I can not believe I’m writing this… We are growing a little baby girl.

‘To our darling boys, you are the best big brothers anyone could wish for and you’re little sister is the luckiest girl in the world to have you all by her side. I honestly have no words…

‘Mummy Daddy and ALL of your big brothers can not wait to meet you little one… We love you so so much already darling girl.’

Stacey looked happy and healthy as she beamed in the picture while Joe, 39, cradled her blossoming baby bump. 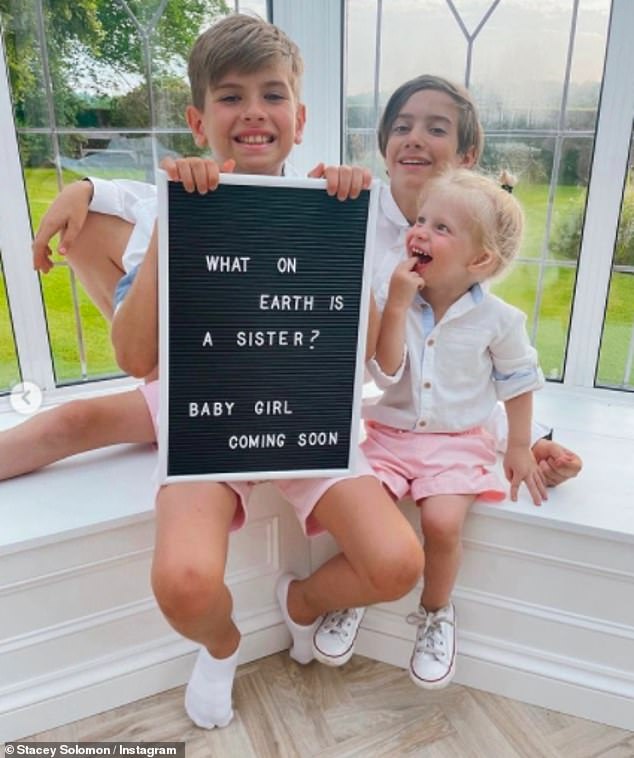 Cute: A second snap showed her children holding a sign which read: ‘What on earth is a sister? Baby girl coming soon!’ 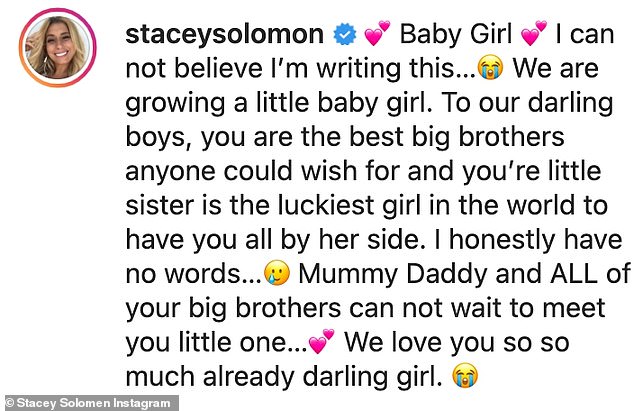 Yay! She wrote in the caption: ‘Baby Girl! I can not believe I’m writing this… We are growing a little baby girl

She looked beautiful in the chiffon pink dress which had a plunging neckline and was cinched in at the waist to show off her changing shape.

Stacey wore her raven tresses in a half up half down style and opted for natural makeup as she posed with Joe who wore a pink T-shirt and black baseball cap.

A second snap showed her children holding a sign which read: ‘What on earth is a sister? Baby girl coming soon!’ 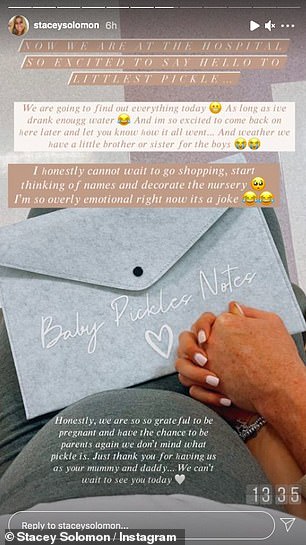 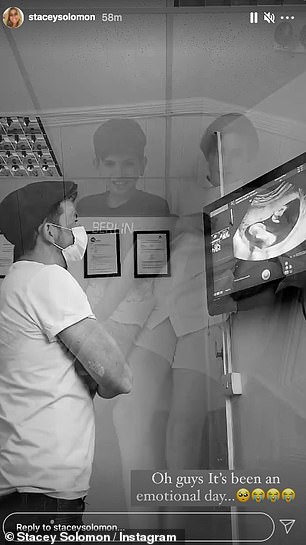 Big news: Earlier on Friday Stacey took to her Instagram Story to tell fans she was in hospital for a scan

She also took to her Instagram Story earlier on Friday to tell her fans that she was in the hospital for a scan and captioned the post: ‘We are going to find out everything today!’ and told fans it had been an ’emotional day’.

After sharing her baby joy last month, Stacey took to her Instagram to share a poll asking her followers to guess if she was having a girl or a boy, with 66% of people guessing girl.

Captioning her image which showed her scan photo, she penned: ‘Soooo many of you saying you can tell if it’s a boy or girl from the scan photo. I think they all look the same but here it is. I love hearing and reading stuff like this, I’m obsessed.’ 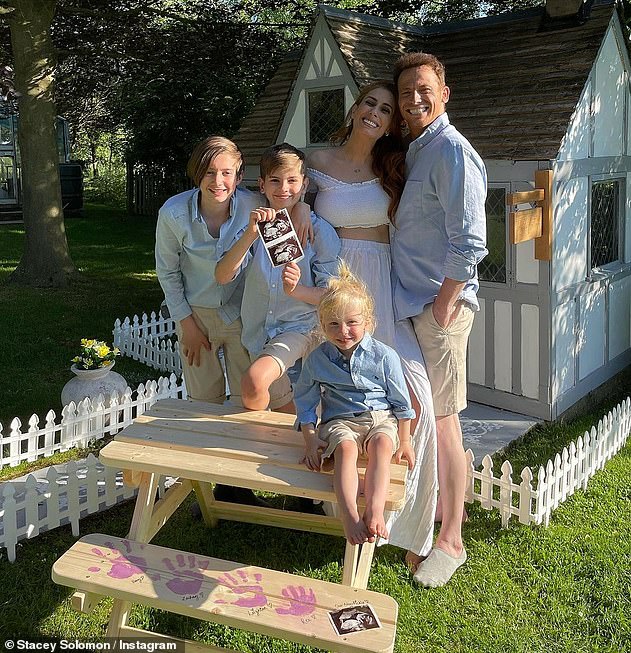 Stacey revealed that she was expecting her second child with Joe on on June 9.

She took to Instagram to reveal the exciting news, sharing a family snap as well as a moving video montage documenting their road to pregnancy, which saw the couple make several attempts to welcome ‘another pickle’ into their lives.

Stacey also revealed that she and Joe had suffered devastating miscarriages before finally getting pregnant again.

Sharing a group photo of the family congregated around their newly-painted wendy house, Stacey beamed with joy as her son Leighton delightedly held up her ultra scan photo. 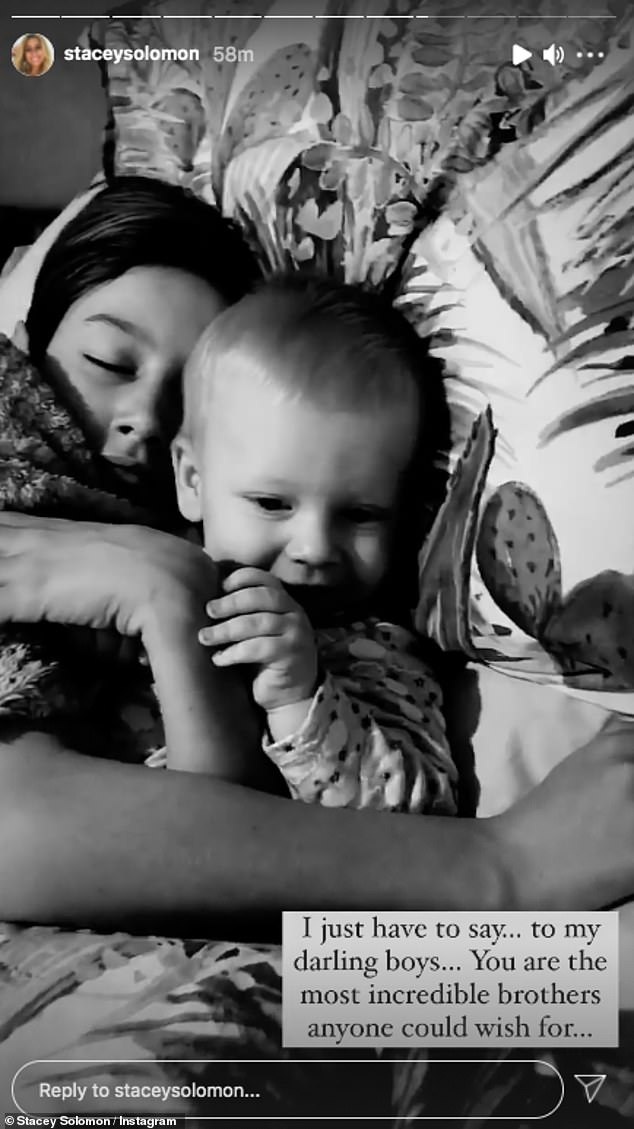 Adorable: She shared another image of her two sons and said that they were the ‘most incredible brothers anyone could wish for’

Captioning the snap, she penned: ‘We are growing another pickle. We’ve never felt so grateful… I have no words.

‘We didn’t think we would get the chance. We love you all to the moon and back. Lots of love From Me, Joe, Harry, Zach, Leighton, Rex, and our little pickle.’

Then taking to her stories, Stacey shared a video montage, which started with her hinting at some big news for her fans, writing: ‘Sorry I have been so quiet but we have something we are so excited to share with you I feel so nervous for so many reasons.’

She then uploaded a black and white video showing a negative pregnancy test alongside a floral bear arrangement as she wrote: ‘For a really long time we’ve been trying for another pickle. It didn’t work out and this was our news quite a few times. 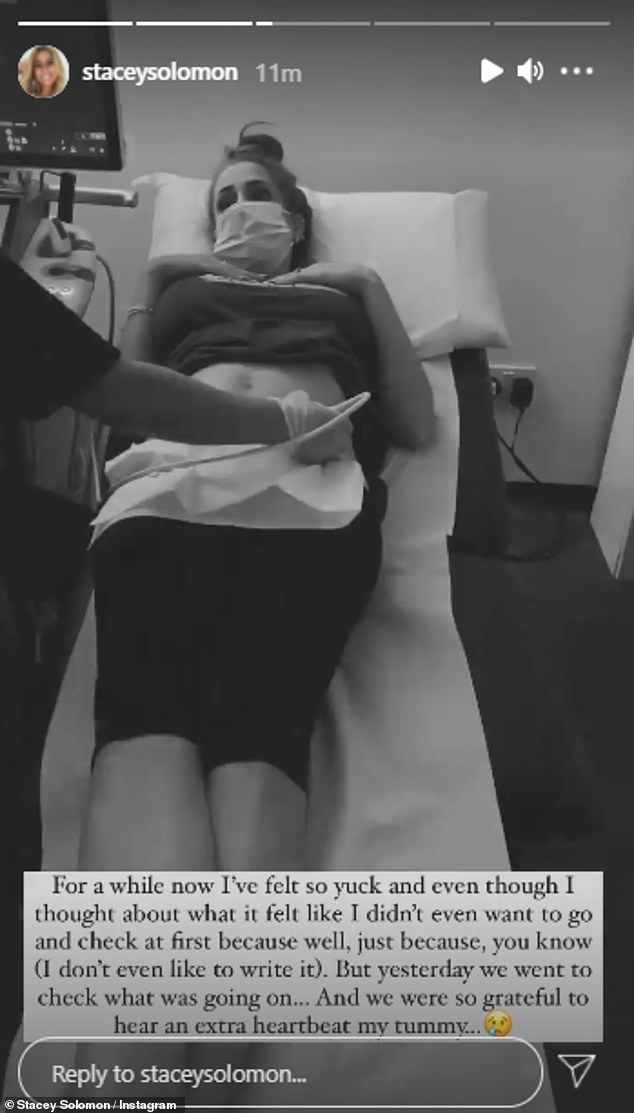 Baby joy: Stacey revealed that she was expecting her second child with Joe on on June 9, sharing a moving video montage documenting their road to pregnancy, which saw the couple make several attempts to welcome ‘another pickle’ into their lives

‘We decided we were so lucky already to have our boys. It is our biggest privilege in life and we are so grateful to be parents so we stopped trying and counted ourselves so so so blessed already.’

The slide then changed to a medical letter which confirmed that the former X Factor contestant had miscarried a child at six weeks.

Another monochrome image showed Stacey and Joe holding hands, with the image giving a glimpse of the heartbreaking pain they must’ve endured.

Stacey continued: ‘For a while now I’ve felt so yuck and even though I thought about what it felt like I didn’t even want to go and check at first because well, just because you know (I don’t like to write it). 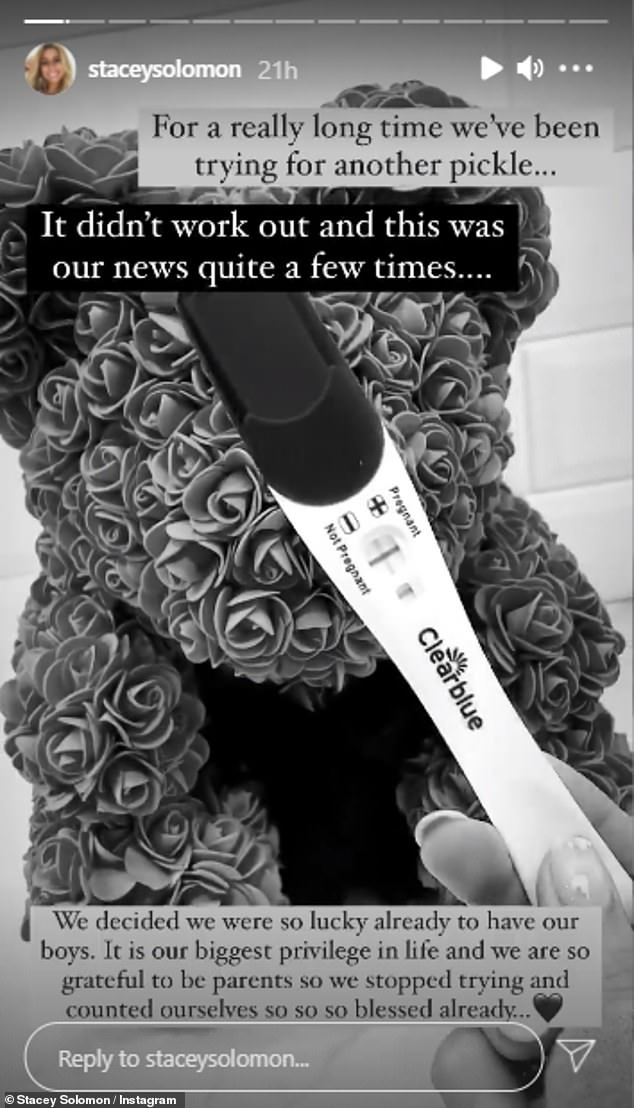 So sad: Stacey also revealed that she and Joe had suffered devastating miscarriages before finally getting pregnant again

‘But yesterday we went to check what was going on. And we were so grateful to hear an extra heartbeat in my tummy. We honestly couldn’t believe it.’

Sharing a clip of her ultrasound on a screen, the TV star went on: ‘So we told the boys and we’ve spent yesterday and today finishing the wendy house, ready to welcome a new pickle into our lives Boys we are so so so excited for you all.’

She concluded: ‘You’re already the most incredible brothers we ever could have imagined raising.’

The heartwarming montage then saw Stacey’s boys excitedly painting their wendy house as they prepared to welcome the new addition to their home. 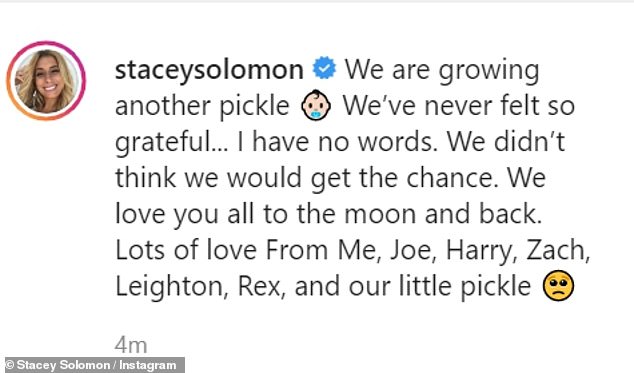 Another pickle pending: Captioning the snap, she penned: ‘We are growing another pickle. We’ve never felt so grateful… I have no words.

The sweet video, set to a cover of Elvis’ hit Can’t Help Falling In Love, also saw the family construct a picnic bench, with everyone adding their handprints to the bench in purple paint.

Sharing a video of her labelling the hand prints, she wrote over the top: ‘Dear Harry, Leighton, Zachary and Rex… you fill our hearts so so so much they’re bursting…’

One of her followers took the time to thank her for being so open and honest about her struggles with falling pregnant.

The fan wrote: ‘Thank you for sharing about your previous loses. I’ve been through it too and you’re giving me hope.’ 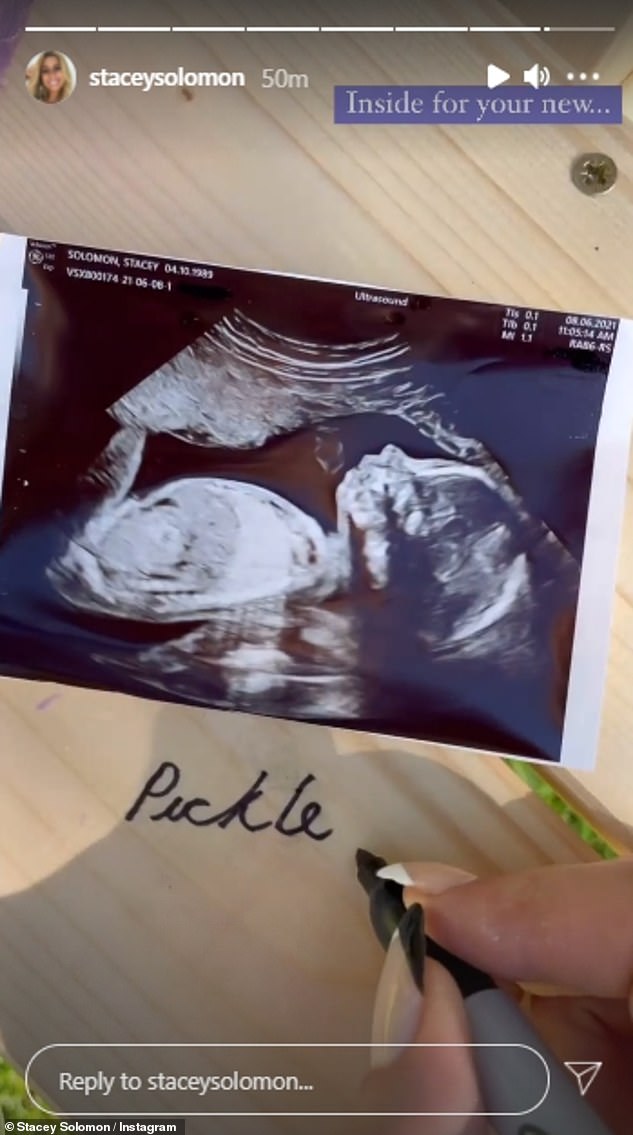 So much love: ‘We can not wait to open our hearts even more and watch you open yours and see them grow even bigger to fit all of the love…’

Stacey replied: ‘So many of you messaging this.. It’s so comforting in one way because knowing so many people have had similar experiences somehow makes you feel less alone…

‘But it’s also sad because, you know that nothing you say or do will take away from how exhausting and heartbreaking those experiences are.

‘Thinking of you all and I’m feeling so so grateful.’

The Tap To Tidy author then shared a preview of her grid post, in which she admitted she felt ‘nervous’ and ‘excited’ about her baby news. 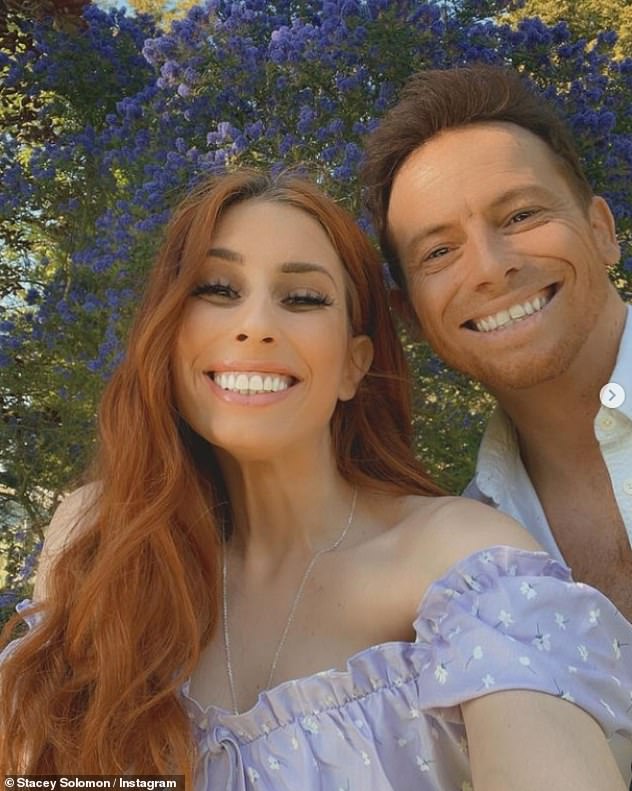 Sweet: The loved-up pair met on the set for I’m A Celebrity… Get Me Out Of Here! when the artist was crowned Queen of the Jungle

She wrote: ‘We love you all so so much. I don’t have many words right now, I feel so nervous and excited and happy and scared all at once…

‘But what I do know is that we love you all to the moon and back. Lots of love from Me, Joe, Harry, Zachary, Leighton, Rex and…’

The star then later shared a sweet snap of her eldest boy Zachary gently holding her stomach as they cuddled up with pet dogs Theo and Peanut.

Alongside the black and white image, she wrote: ‘I am sobbing reading your messages. Me, Zachy, Joe and Peanut are watching the end of a film and then I’ll try to reply to your beautiful messages. 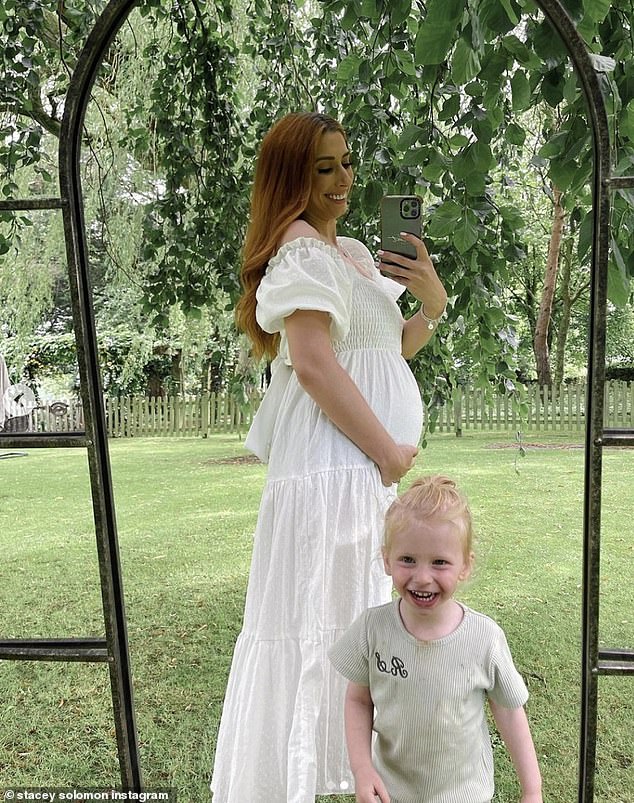 Glowing: Stacey shared a glowing picture to her Instagram on Saturday wearing a floaty white dress

‘Peanut and Theo definitely knew before me. Love you all so much.’

Stacey’s heartwarming baby news garnered several congratulatory messages from her fans and showbiz pals, who all flocked to share their well wishes.

Mollie King penned: ‘So happy for you!! Huge congratulations!’, while her fellow The Saturdays star Rochelle Humes wrote: ‘SO over the moon for you.’

The newly-engaged couple reside in Essex with their children, while Joe’s son Harry, 13, lives with his mother Emma Sophocleous. Stacey co-parents Zachary with her former partner Dean Cox and Leighton with ex-fiancé Aaron Barham.

The loved-up pair met on the set for I’m A Celebrity… Get Me Out Of Here! when the artist was crowned Queen of the Jungle and the former EastEnders star hosted spin-off series Extra Camp in 2010, a year after he took home the title.

The duo confirmed their relationship in January 2016, with the auburn-haired beauty stating at the time: ‘It’s going really well… we’re having fun, spending time together and getting to know each other.’

They announced they were expecting their first child together in February 2019, and welcomed baby Rex three months later.

If you have been affected by this story, contact Tommy’s, a miscarriage, premature birth and stillbirth charity, at mailbox@tommys.org or call 0800 0147 800 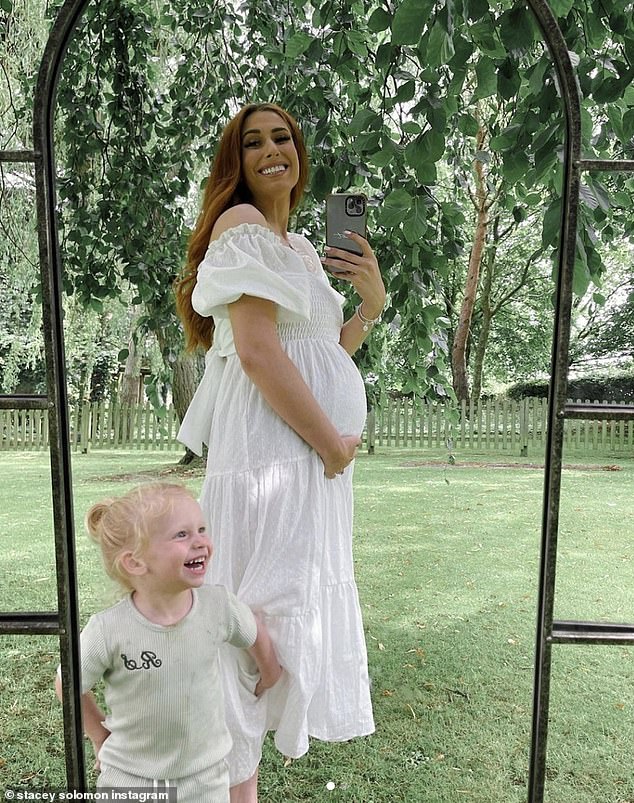 Family: The star showed off her changing shape in the dress as she posed for a radiant mirror selfie

Brandi Glanville Says She Once Threatened To Kill LeAnn Rhimes