Linda Robson confessed that she forgot she had the coil inserted as a means of contraception and doctors struggled to remove it, as it had embedded in her womb.

The TV star, 63, was discussing forms of contraception during Loose Women‘s broadcast on Friday, when she admitted to finally having the coil removed 25 years later.

A doctor had reminded Linda that she had the coil, after she forgot it was still there, and a gynaecologist tried three times to finally remove it from her womb – warning Linda she would have to have a procedure to take the coil out if they couldn’t do it.

Ouch: Linda Robson revealed on Loose Women on Friday that she forgot she had the coil and doctors struggled to remove it from her womb 25 years later

Speaking about her experience live on air, Linda revealed: ‘ had the coil for 25 years embedded in my womb, I just forgot [about it].

After a doctor advised her to head to hospital, Linda met with a gynaecologist who failed to remove it twice, before successfully retrieving it on their third attempt.

‘I went to the hospital, the gynaecologist was trying to get rid of the coil, they were digging away… he did it twice and said, “You’ll have to come back and have a procedure,”‘ she revealed.

Reluctant to have a procedure, Linda encouraged the doctor to try again. 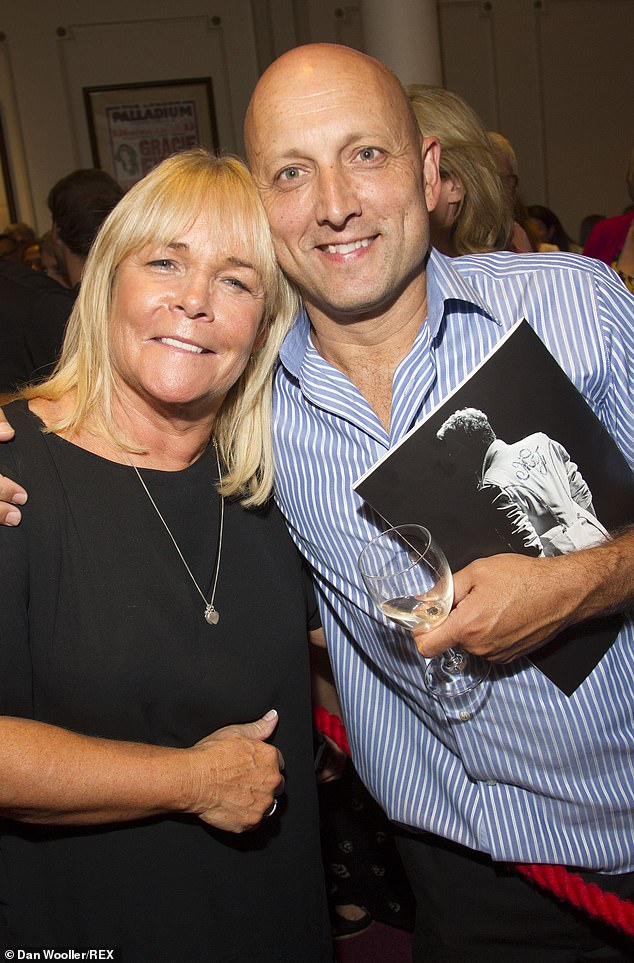 Oops: The TV star, 63, (pictured with husband Mark Dunford in 2014) was discussing forms of contraception during Loose Women ‘s broadcast on Friday, when she admitted to finally having the coil removed 25 years later

She continued: ‘Third time, it really hurt – but he got it and I was just so relieved I didn’t have to have a procedure done. I think a lot of people forget they have the coil.’

The coil – also known as the copper coil or Mirena coil – is a hormonal intrauterine device that is used for long-term birth control and to treat heavy periods.

It can protect against pregnancy for up to 5 to 10 years.

The Loose Women panel were discussing the difference in contraception for men and women, with Linda venting: ‘[Contraception] is all on women, I don’t think anything else has been invented for men apart from a condom. 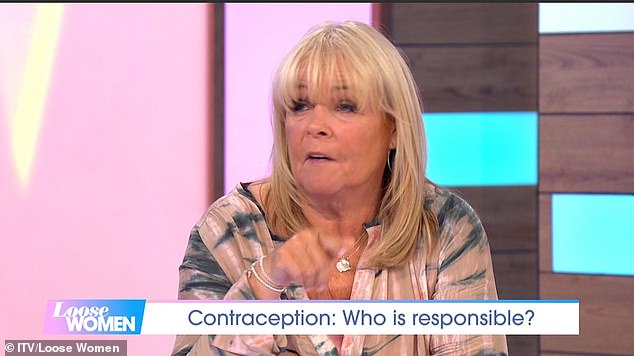 Confession: The TV star was reminded she had the coil in during a doctors appointment and was sent to the hospital to see a gynaecologist 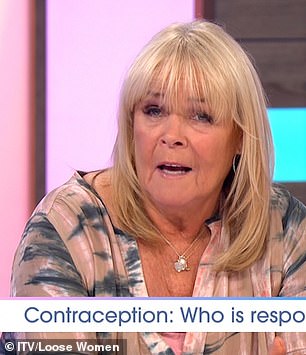 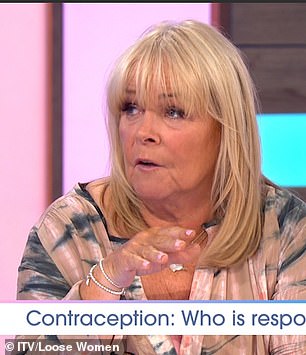 Painful: Linda revealed that the gynaecologist tried and failed to remove the coil on two occasions and warned she’d have to have a procedure if they couldn’t do it 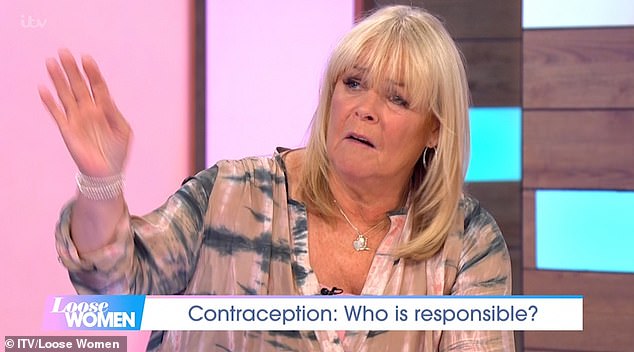 Third time’s a charm: Linda urged the gynaecologist to try again despite it being painful and they successfully managed to retrieve it

‘We have everything menopause, they just sail through life, they don’t have to have babies.’

Ranvir revealed that currently there are only two forms of contraception available to men; condoms and a vasectomy.

Discussing whether a contraceptive pill should be available to men, like it is women, Frankie Bridge joked: ‘Well, they managed to make viagra.’

As the panel shared their experiences of using contraception, Brenda Edwards issued a warning that contraceptive pills aren’t always 100 per cent effective. 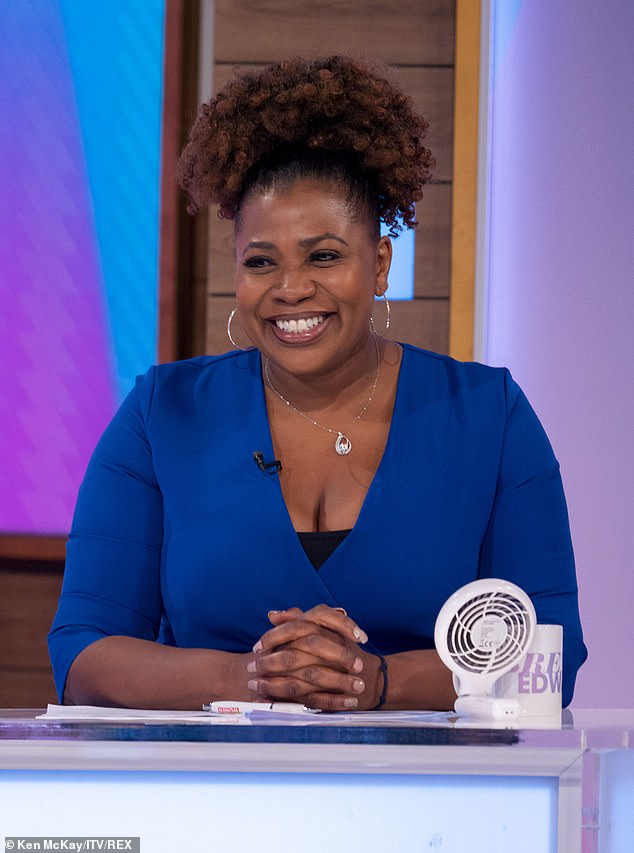 Honest: Brenda opened up about her experience with the contraceptive pill and revealed she fell pregnant twice when using it

‘You could say I didn’t have the best relationship with contraception as I got pregnant twice on the pill,’ Brenda revealed.

‘The first time it was my 21st birthday, I collapsed and the doctor told me I was five months pregnant. I was still menstruating.’

She continued: ‘The second time, I got pregnant again on the pill and the doctor said, “Oh you’re really fertile.” After that I had the coil fitted.

‘It is a worry when you’re taking all these things and all the side effects with it and sometimes it doesn’t actually work.’

Loose Women airs on ITV every week day from 12.30pm. 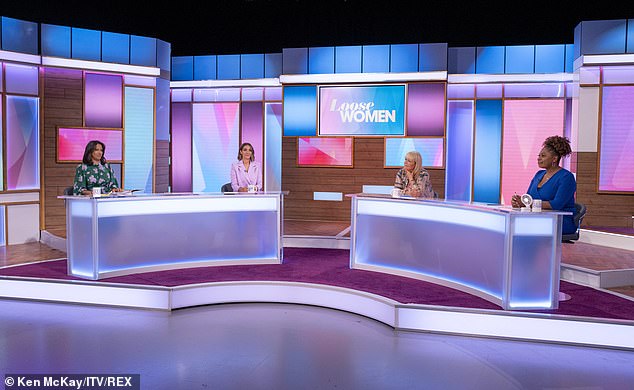 Debate: The panel had been discussing the difference in contraception for men and women (pictured above – Ranvir Singh, Frankie Bridge, Linda Robson and Brenda Edwards)