No wonder his smitten! Tennis bad boy Nick Kyrgios’s girlfriend Chiara Passari shows off her incredible figure in a bikini as couple continue their romantic getaway in The Bahamas

Nick Kyrgios‘s girlfriend Chiara Passari turned up the heat during the couple’s romantic getaway in The Bahamas over the weekend.

The brunette beauty showed off her incredible figure in a black cut-out bikini as she went swimming in the crystal clear water.

She posted several pictures of the couple’s beach outing on Instagram.

And Nick certainly approved, instantly liking the photos and leaving a love heart emoji underneath.

It comes after the couple shared a steamy pool session on the picturesque island last week.

In a photo uploaded to Instagram, they were shown kissing passionately in a pool in the Bahamas.

Chiara has her legs wrapped around the 26-year-old’s sportsman’s waist and her arms are around his neck as they kiss. 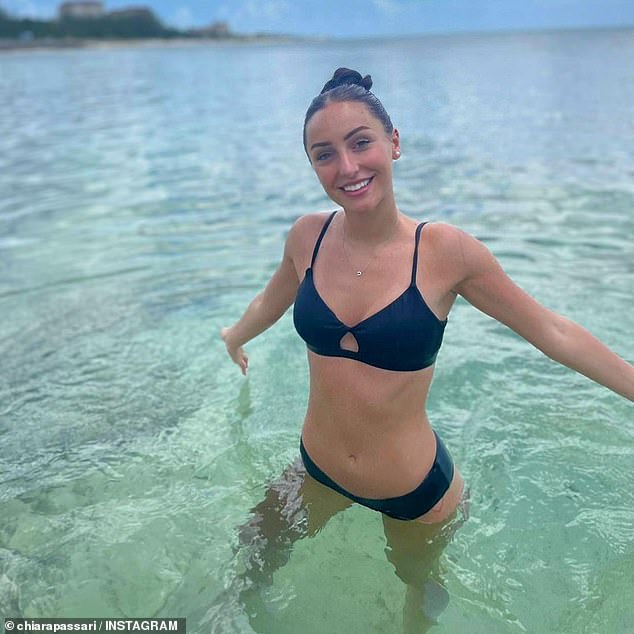 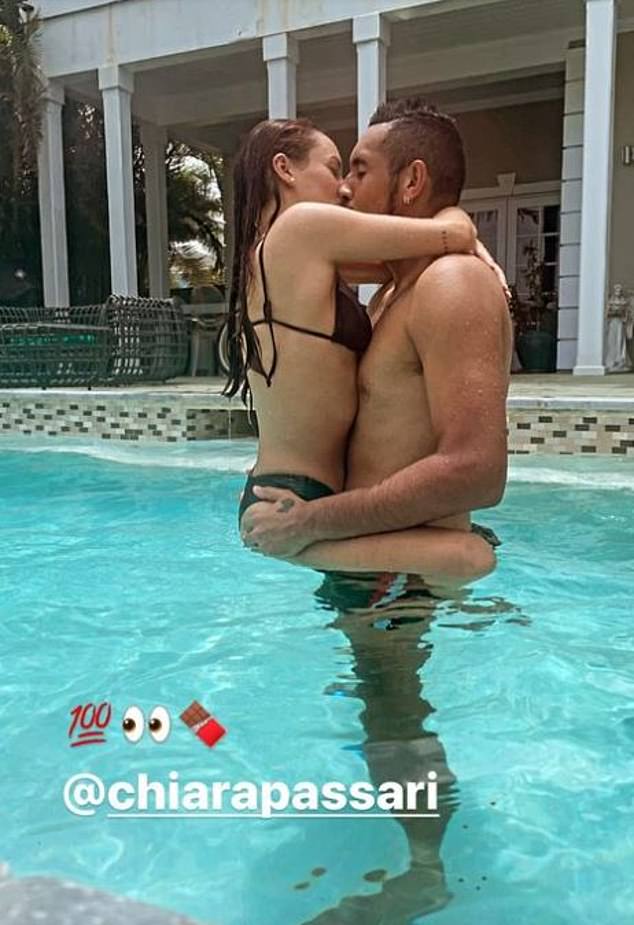 The getaway comes after Nick crashed out of Wimbledon earlier this month.

He was left heartbroken after being forced to retire from the tournament during his third round match against Canadian young gun Felix Auger Aliassime following a stomach injury.

Following the loss, Nick took to Instagram to share a clip of himself congratulating Felix and leaving court.

‘I left it all out there man…. I hope you all enjoyed the ride. Till next time…’ he wrote alongside it. 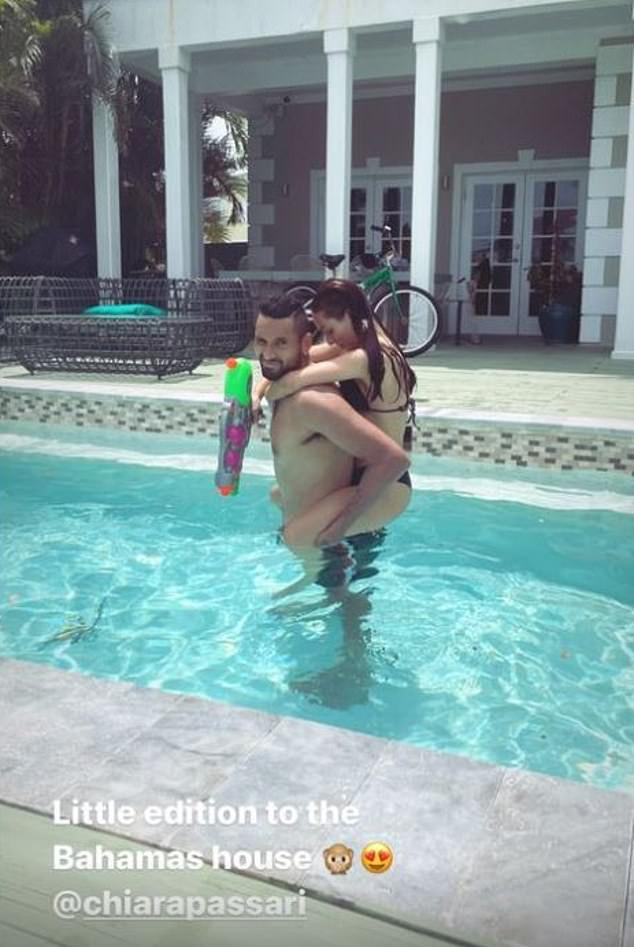 Fun! The couple were in the Bahamas. In one image, Chiara jumps on Nick’s back

Meanwhile, Nick and Chiara have had an on-and-off romance for a while now.

Nick told The Daily Telegraph: ‘I am super excited to get back on there… I am travelling with my best friend and girlfriend.’

The couple started dating in July 2020 after the tennis star returned to his hometown of Canberra because of the Covid-19 pandemic.

In February, fans speculated the couple had ended their relationship after Daily Mail Australia exclusively revealed a nasty exchange of messages between the pair.

The screenshot of one text message exchange between Chiara and Kyrgios showed an emotionally charged argument.

While the context of messages sent before the screenshot was taken was unclear, the tone of those that followed – particularly from Kyrgios – portrayed a relationship clearly on the rocks. 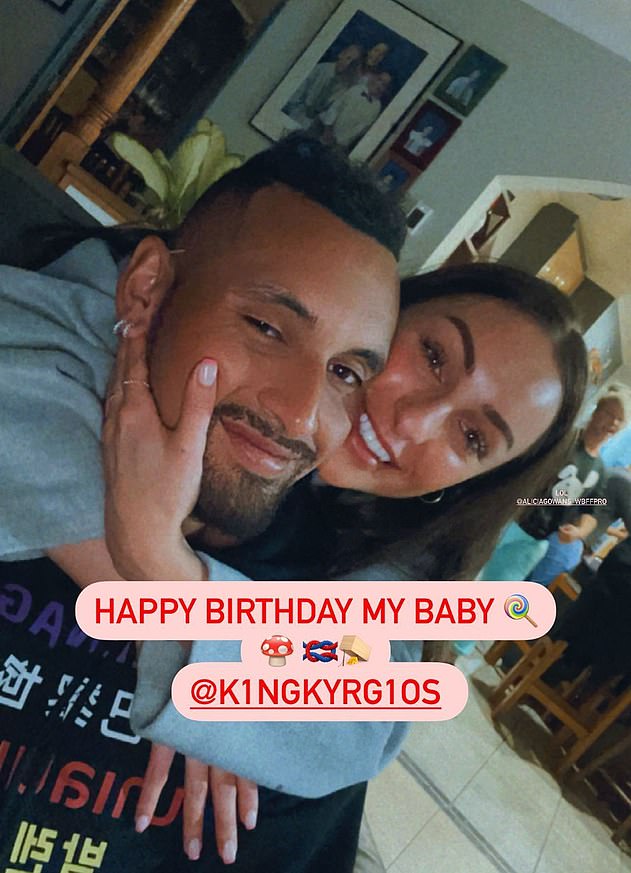 Will it last? The genetically-blessed couple have had an on-and-off romance for a while now

At the time, Chiara responded to Daily Mail Australia’s request for comment with a series of claims about Kyrgios that could not be published.

However, the pair certainly seem to be going strong since that rocky phase of their relationship.

In April, they celebrated Nick’s birthday with a romantic night out together, and after that, they climbed the Sydney Harbour Bridge. 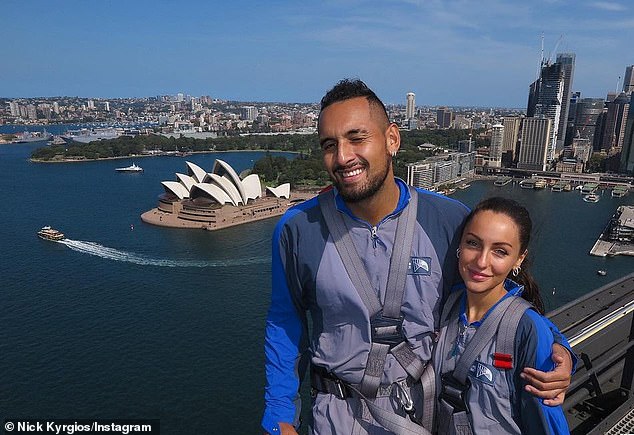 Taking their love to new heights! In April, they celebrated Nick’s birthday with a romantic night out together, and after that, they climbed the Sydney Harbour Bridge