Angelina Jolie was the picture of a doting mother when she stepped out with three of her six children on Thursday.

The actress, 46, was seen heading out with son Pax, 17, and daughters Zahara, 16, and Shiloh, 15, in Paris, France, where they shopped at KITHs and the Guerlain store.

Putting on a stunning display, Angelina looked sensational in a white shirt that she tucked into a pair of flared beige trousers.

Angelina Jolie puts on a stylish display in a white shirt and beige trousers as she steps out with children Pax, 17, Zahara, 16,and Shiloh, 15, in Paris

Angelina boosted her height in a pair of beige heels, and she also had a matching beige suit jacket that she took off in the sun.

Her brunette locks were brushed into a sleek, straight style that fell over her shoulder and she wore a light palette of make-up.

The Maleficent star complemented her ensemble by keeping her personal items in a small beige handbag.

Angelina made sure to keep safe amid the coronavirus crisis by wearing a face mask, and her children followed her example. 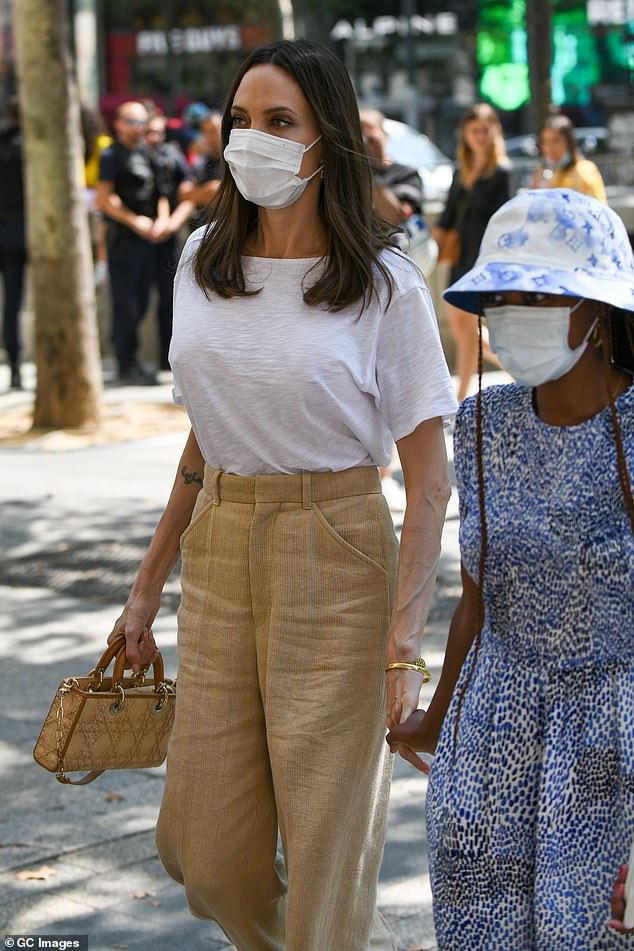 Wow: Putting on a stunning display, Angelina looked sensational in a white shirt that she tucked into a pair of flared beige trousers 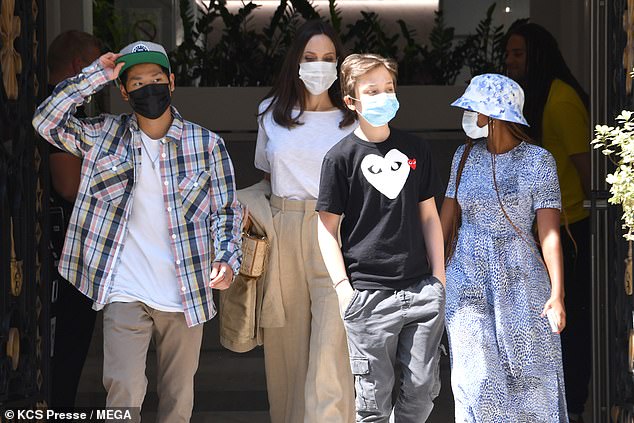 Family: Angelina kept close to her three children during their outing 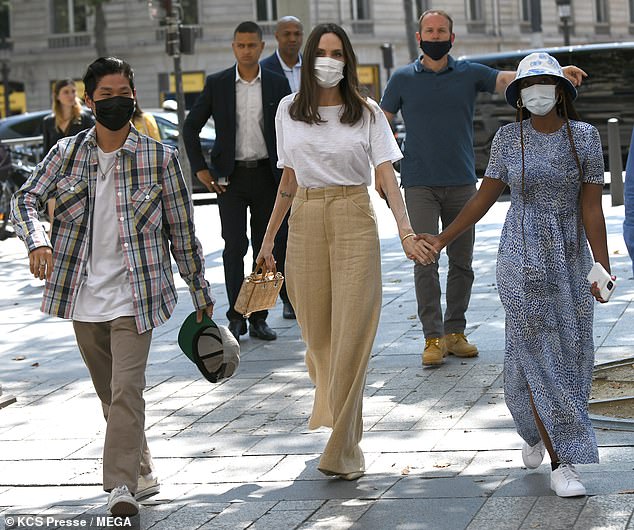 Doting: While she was out and about, Angelina was seen walking while holding onto Zahara’s hand as Pax and Shiloh walked beside them

While she was out and about, Angelina was seen walking while holding onto Zahara’s hand as Pax and Shiloh walked beside them.

Zahara looked stylish in a blue maxi dress that she paired with white trainers and a reusable tote bag.

Angelina shares the trio, as well as daughter Vivienne, 13, and sons Maddox, 19, and Knox, 13, with her former husband Brad Pitt.

Angelina filed for divorce in 2016 citing ‘irreconcilable differences’ and it was finalized in 2019. The former pair have been in a lengthy custody battle with the actress wanting sole custody and Brad fighting for joint.

Last month, Angelina was reportedly left ‘bitterly disappointed’ after a court awarded joint custody to her ex Brad, a decision was allegedly set to contest in early July.

Legal experts in Los Angeles told DailyMail.com in March that the pair have each spent over $1million in legal costs already – and said the custody battle could go on for six more years.

Despite the drama, Angelina has reportedly set her sights on finding love again, with the actress rumored to have been ‘spotted on another secret date’ with The Weeknd at a private concert in Los Angeles over the weekend.

Images of the stars attending Mustafa’s private concert appeared on the Instagram account Deuxmoi, which showed The Weeknd with a group of friends and Angelina sitting with daughters Shiloh, 15, and 16-year-old Zahara.

A Twitter fan account for the Blinding Lights singer, 31, also posted the images of Angelina with her kids and The Weeknd.

Earlier this month, the Oscar-winning actress and The Weekend set the internet into a frenzy after they were seen dining at Giorgio Baldi in Santa Monica and they have continued to heat up speculation with their latest outing.

While an insider told The Sun the pair are just ‘just friends’ now, the singer ‘made no secret of the fact he has a huge crush on her’ for years.

While the pair are not known to be friends, there are some intriguing links between them, including the singer referencing Angelina’s famous pout in one of his hit songs.

Prior to being romantically linked with The Weeknd, Angelina was rumored to have reconnected with her ex-husband Jonny Lee Miller.

YOU ARE THE REASON Lyrics – KETAMA

Comedian Michael Blackson PROPOSED To Girlfriend On The Breakfast Club!!