TOWIE stars Courtney Green and Chloe Meadows are the biggest casualties in the ITVBe show’s mass cull that has seen 10 cast members axed, MailOnline can reveal.

The best pals, who joined the series in 2015, have been dropped in a huge bid to breathe new life into the long-running reality series after a ratings slump.

Harry Lee, 26, Kelsey Stratford, 20, and Clelia Theodorou, 26, are also tipped to leave, while Chloe Brockett, 20, has confirmed she will remain in the cast.

MailOnline can confirm Amber Turner, 28, a divisive figure among fans, is safe, as well as TOWIE pals James Lock, 34, and Pete Wicks, 32.

Original cast member Amy Childs, 31, who rejoined the series in 2020, will also remain on the show, while her cousin Harry Derbidge, 27, has been given the boot.

A source said: ‘Courtney and Chloe are gutted, they thought they were part of the furniture. But bosses feel the ruthless cull was needed to shake up the show.

‘Many of the stars are yet to be told ahead of meetings scheduled with producers today and are preparing themselves for the worst. It will be devastating for so many of them.’

The axing of Courtney and Chloe comes after TOWIE bosses confirmed the next series of the reality show will focus on a ‘smaller group of cast members.’ 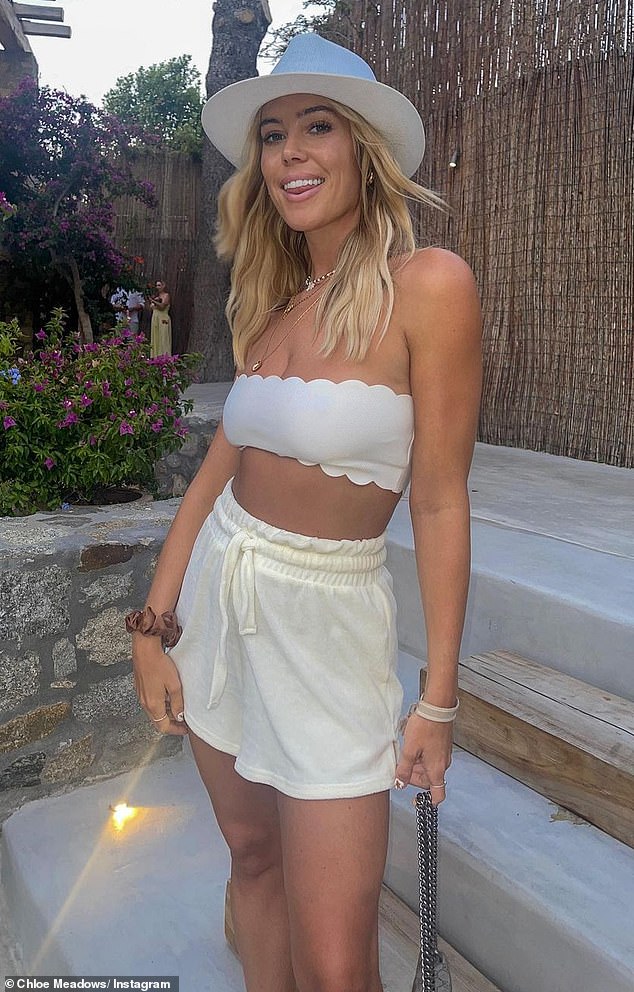 ‘Devastating’: Chloe (pictured), who joined the series in 2015, has been axed in a huge bid to breathe new life into the long-running reality show after a ratings slump 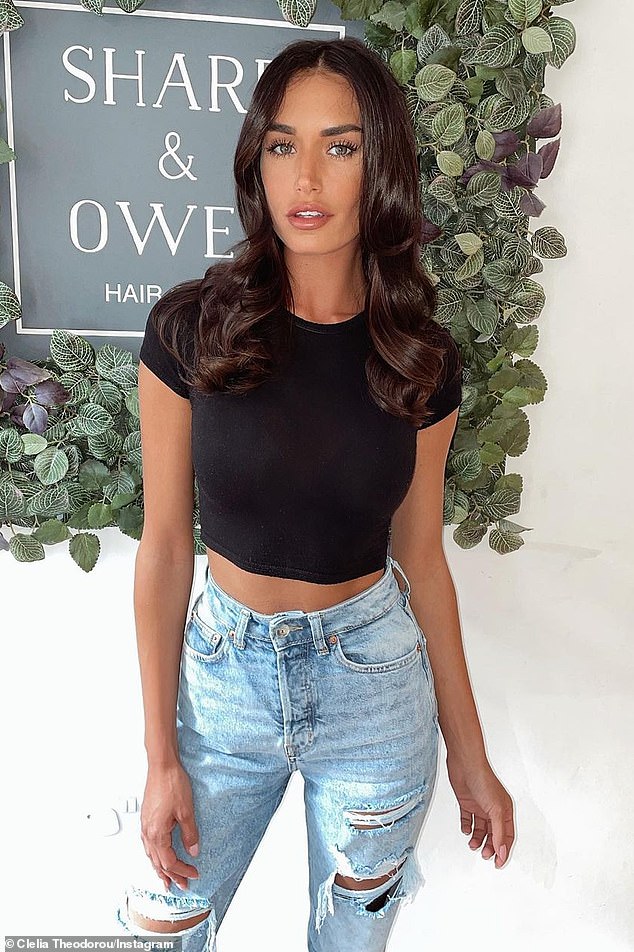 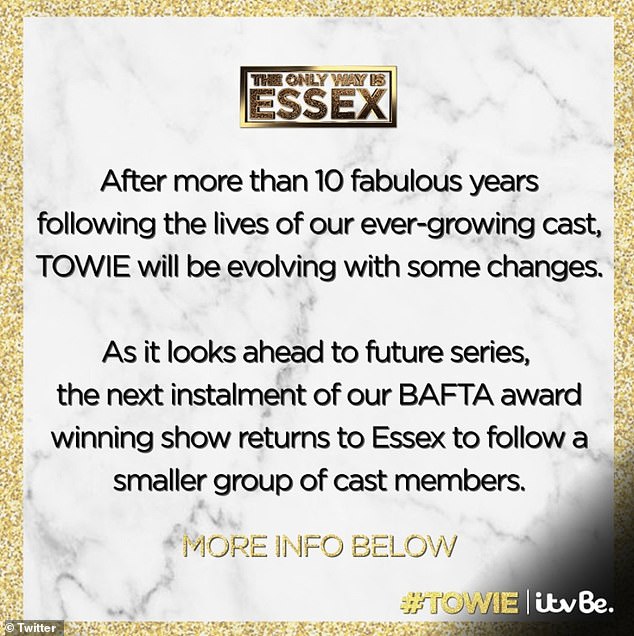 ‘Smaller group’: On Wednesday, TOWIE confirmed: ‘After more than 10 fabulous years following the lives of our ever-growing cast, TOWIE will be evolving with some changes’

Tom McDonnell, 26, who’s close friends with Harry Lee, is also not returning to the series.

Nicole Bass, has also been dropped, in a decision that has left her ‘devastated.’

A source close to the star, 29, who first joined the show in 2015, and returned last year, told MailOnline she is disappointed bosses have let her go after she just rejoined the cast following a six-year absence.

She confirmed on Instagram: ‘I will not be on the next series of TOWIE. I went on to be with Olivia [Attwood] and Clee [Clelia Theodorou] and she got her own show that very same month. My group of girls are not part of the show either. I will miss a selective few though.’

A TV insider added: ‘The cast who are yet to learn their fate are expecting the younger members of the show to go, but the older stars are still worried they might be given the boot.

‘For some people, TOWIE is their life but others have careers outside of the show, so won’t take it as badly.’

The Only Way Is Exit: Who’s getting the chop in TOWIE cull 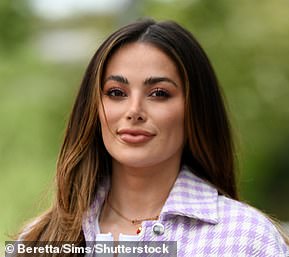 The 26-year-old star has been axed from the show, after first joining the series in 2016. She is famed for her toxic relationship with ex TOWIE co-star Myles Barnett 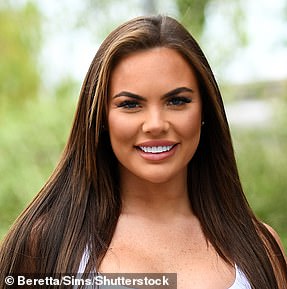 The 20-year-old, who joined the ITVBe series when bosses recruited a ‘younger generation’ of stars in 2019, has also been axed from the popular programme 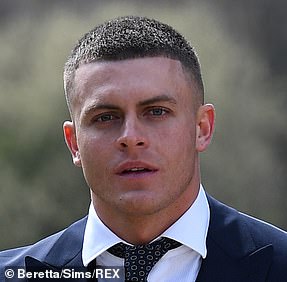 The 26-year-old who was a semi-professional footballer, is out of the show after joining in 2019 and romancing the likes of Chloe Brockett and Frankie Sims 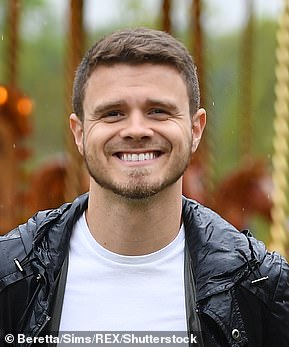 The 26-year-old who’s close friends with Harry Lee, is also not returning to the series, after joining in 2019 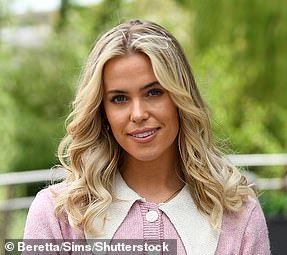 The 28-year-old  who also joined TOWIE in 2016, will no longer be on the series. She’s famed for her friendship with Courtney, and bitter rows with on-off pal Amber Turner 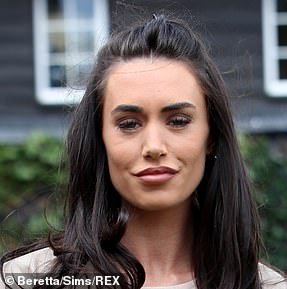 The 26-year-old who’s originally from Devon, joined the series in 2018 as Dan Edgar’s love interest, but she’s now leaving the Essex drama behind, as bosses also give her the chop 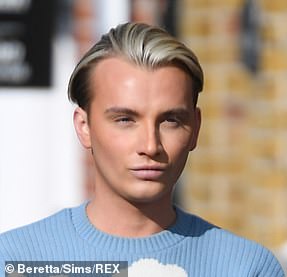 The 27-year-old who’s Amy Childs’ cousin, and former original cast member, will also not be returning, after rejoining the series again in 2020 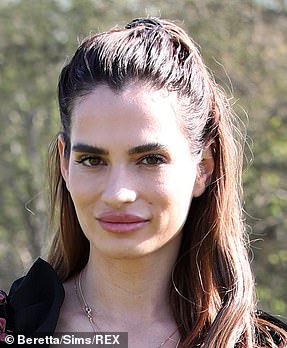 A source close to the star, 29, who first joined the show in 2015, and returned last year, told MailOnline she is disappointed bosses have let her go

Chloe Brockett, who joined the series in 2019, confirmed she hasn’t been axed, while talking on Instagram stories on Thursday.

Cindy Crawford, 55, makes the rare move of sharing a photo with her sisters and mom

However, she was ‘disgusted’ by some cast members that are alleging mocking those that have been dropped, saying it’s unfair to ridicule people who’ve lost their jobs.

She said: ‘Obviously yesterday TOWIE put up a statement saying they are making the cast a lot smaller, so, I am still part of the cast, I’m getting a few messages asking if I am, I am.

‘But I did just want to put out a quick message and just say that the cast members that remain on the show that are finding it funny about the ones that have been dropped, I find that absolutely disgusting, and I think even people I have publicly argued with, I would never laugh about them losing their job because it’s disgusting.

‘People that find that funny, karma is a thing and I hope it bites you on the a***.’ 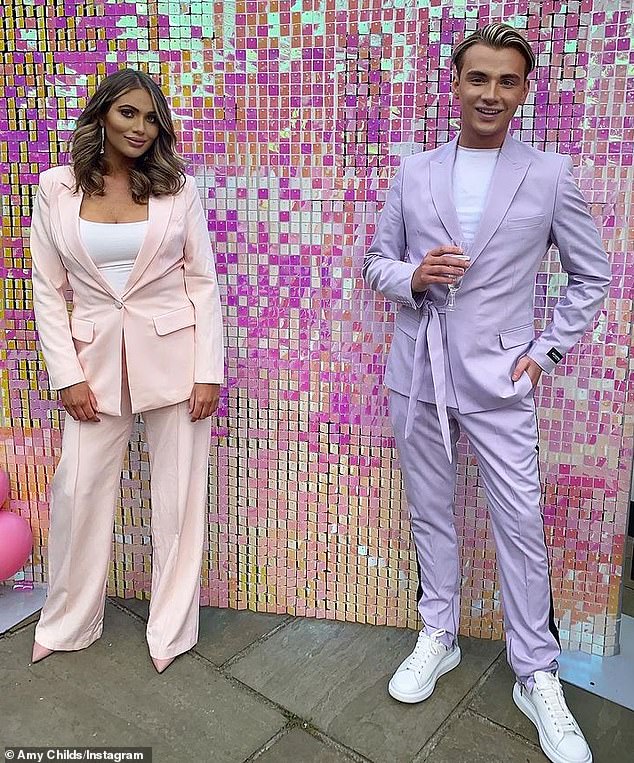 Family: Original cast member Amy Childs, (pictured) who rejoined TOWIE in 2020, will remain on the series, but her cousin Harry Derbidge has been axed from the show 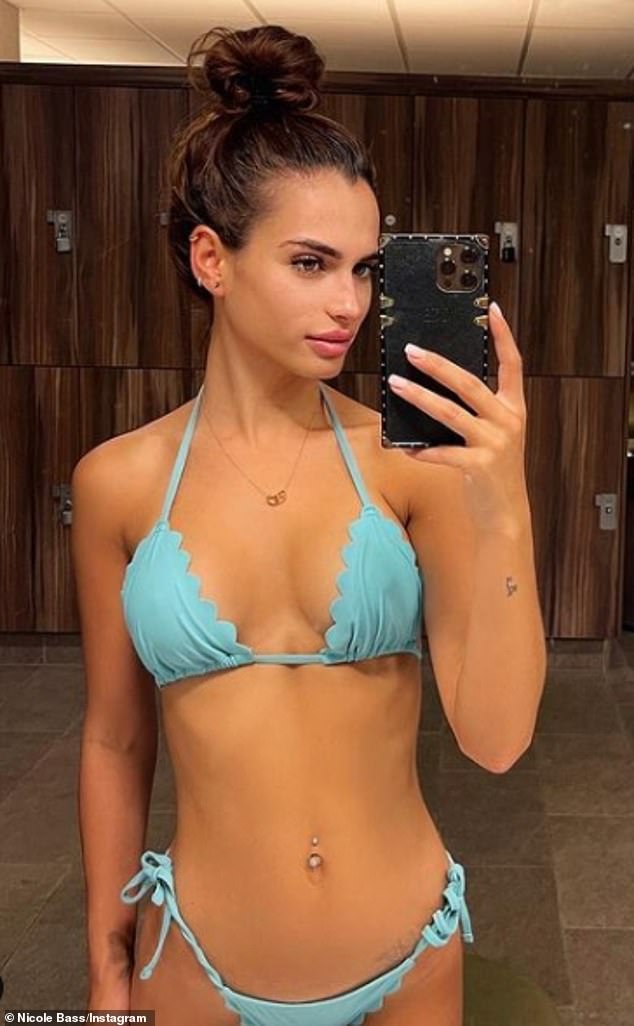 ‘I will miss a selective few’: Nicole Bass (pictured), who first joined TOWIE in 2015 but returned to the series last year, confirmed she will no longer be part of the cast 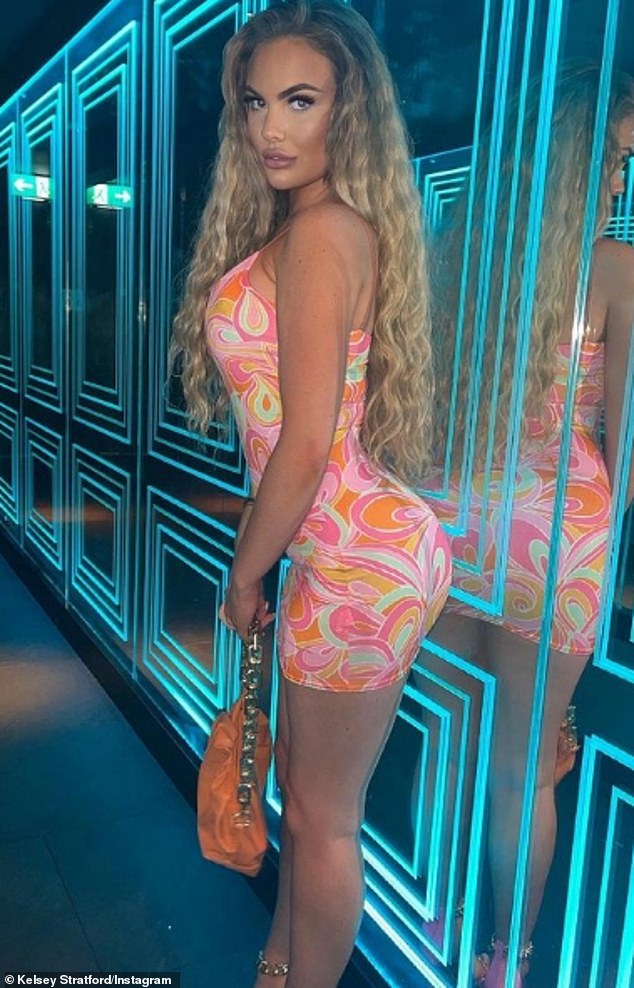 Moving on: Kelsey Stratford (pictured) is also leaving TOWIE, after producers confirmed they are revamping the show ahead of its 29th series

On Wednesday night, in a statement released to social media, TOWIE confirmed: ‘After more than 10 fabulous years following the lives of our ever-growing cast, TOWIE will be evolving with some changes.

‘As it looks ahead to future series, the next instalment of our BAFTA award winning show returns to Essex to follow a smaller group of cast members.’

‘This change allows our cast more time to film their real lives, showing more of their personal passions and professions, alongside their strong bonds and dynamics with family and friends,’ producers expanded.

‘Those who won’t appear regularly on screen next series will always be part of the TOWIE family and we wholeheartedly thank them for sharing their lives with us in recent years.’ 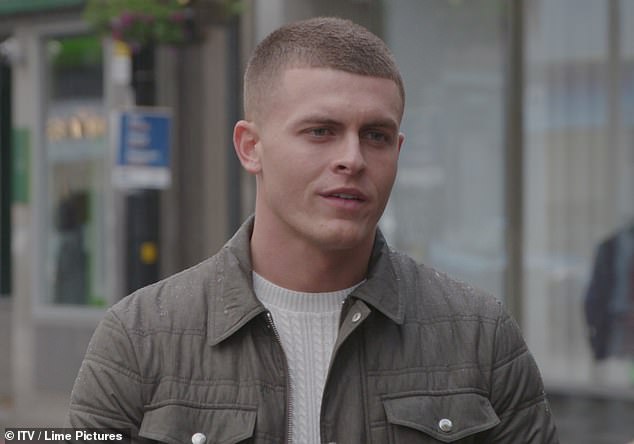 Out: Harry Lee (pictured), who joined the ITVBe series in 2019, has been dropped from the show, following romances with cast members Chloe Brockett and Frankie Sims 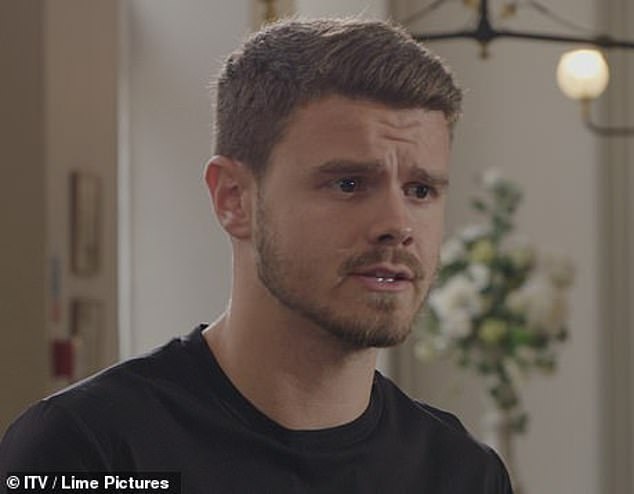 Given the boot: Tom McDonnell (pictured) who’s close friends with Harry Lee, is also not returning to the series after joining in 2019

In a reminder to TOWIE viewers to be kind to the stars of the show, they said: ‘As always, their wellbeing is of paramount importance to us and we will continue to offer welfare support if needed to all past and present TOWIE cast.

‘We ask and urge all our viewers to think before commenting below, and remember that #ThesePeopleAreAllReal.’

Tommy Mallet, 28, who will star alongside Georgia Kousoulou, 30, in a new breakout series that follows their lives as new parents, said in the comments: ‘Hope everyone’s okay.’

Liam Gatsby, 32, who is believed to still be on the show as it moves into its 29th series, said: ‘Lets go.’ 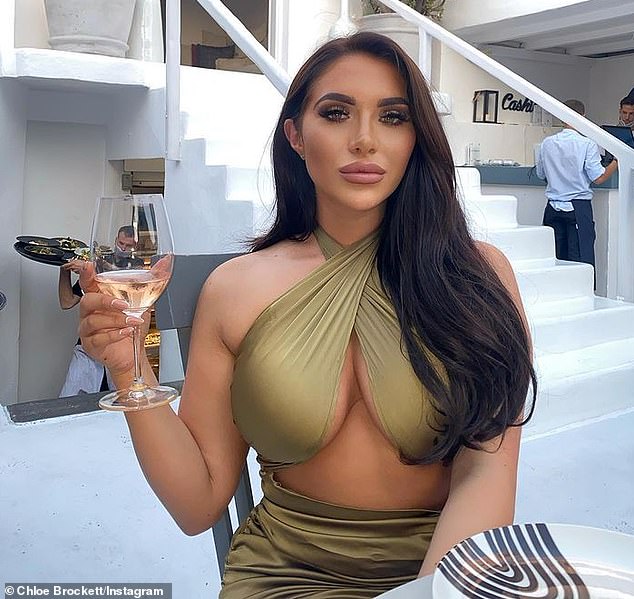 ‘Disgusting’: Chloe Brockett (pictured) confirmed she will remain part of the TOWIE cast, but she slammed stars of the show that have allegedly belittled those who’ve been dropped

Chloe Sims, who is a much-loved member of the TOWIE cast among viewers and those on the show, will remain on the series.

Her sisters Frankie and Demi are also going to continue their time on TOWIE, with the family set to become the focal point of the show going forward.

In the most recent series, Chloe also filmed scenes with her daughter, Madison, following years of keeping her out of the spotlight.

The sister’s brother, Charlie, also made an appearance on the show again this year, after first starring on TOWIE while he was in a relationship with Ferne McCann, back in 2013. 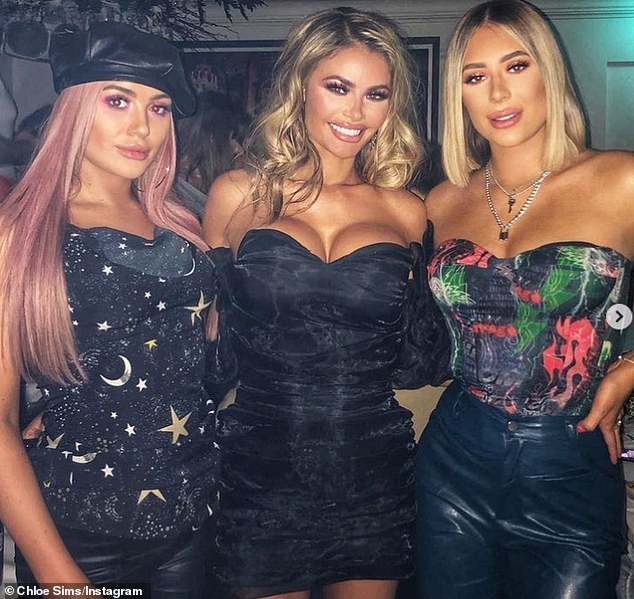 Safe: Chloe Sims, as well as her sisters Frankie and Demi (pictured), will all remain on the reality series