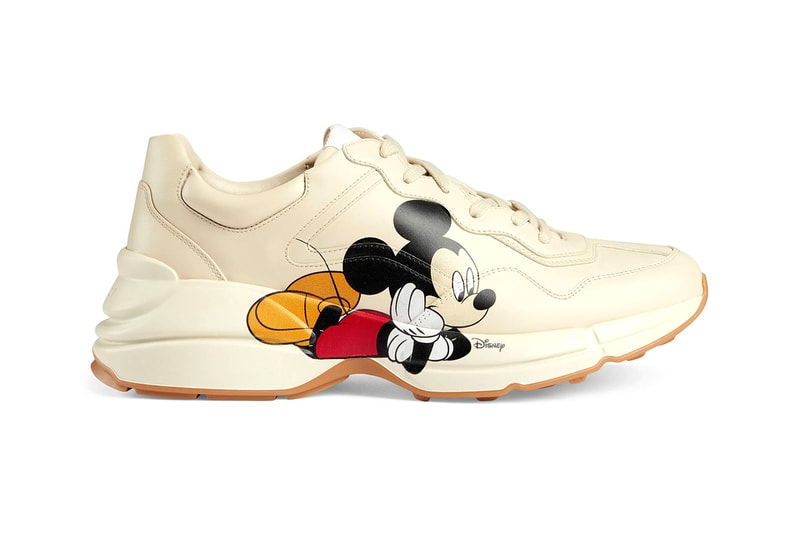 Together, Disney and Gucci bring reworked iterations of the Rhyton sneaker, Ace sneaker, slip-on and slide to 2020, each designed under the creative direction of Alessandro Michele. Much like the overarching collection, the sneakers are inspired by the Chinese Year of the Mouse and many silhouettes feature the all-new Mini GG Supreme canvas splashed across their uppers.

Gucci’s Rhyton sneaker comes in its signature “Ivory Leather” colorway and sports a large vintage graphic of Mickey Mouse on the mid-panels, situated next to the iconic Disney logo. A similar cartoon is depicted on the side of the distressed “Ivory” Ace sneaker, while the alternative pair sports the aforementioned Mini GG Supreme canvas across its upper combined with the signature Mickey motif.

Rounding out the footwear offerings for Chinese New Year is a pair of slip-on sneakers featuring the all-over GG print and a repeated full-body Mickey Mouse graphic, sitting alongside house symbols such as the green-and-red webbing at the rear, as well as a pair of slides in “Beige/Ebony” that also sport the repeated GG-meets-Mickey print.

Prices range from $370 USD for the slides and up to $890 USD for the Rhyton sneaker, and can be purchased on Gucci’s website and at its boutiques worldwide now.

In other news, Sean Wotherspoon has confirmed he has an adidas collaboration in the works.