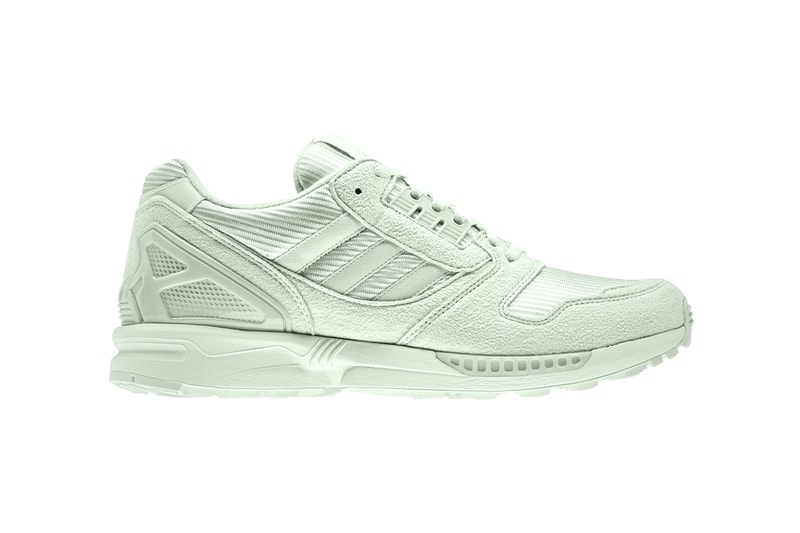 adidas continues to reignite its ZX line with three new ZX 8000s, appearing in “Linen Green” and “Orbit Grey” for men and a homage-paying “Glow Blue” colorway for women.

Kicking off the ZX 8000 line-up for 2020 is the “Linen Green” offering. Its tonal body is composed of premium hairy suede and mesh for the upper, with a textile fabric making up the Three Stripe branding on the mid-panel and tongue tab. Elsewhere, adidas adds a tonal heel cup, eyestay and laces, and rounds off the pair with a matching sole unit that houses the sneaker’s iconic Torsion technology system.

Next is the ZX 8000 in “Orbit Grey,” which is once more completely tonal. This time around the silhouette adopts an off white hue with the same textiles working the entire shoe. Its sole unit is crisper than the upper, showing the exposed forefoot compression unit in detail. Rounding out the pack is the women’s-exclusive “Glow Blue” iteration, which takes on a similar colorway to the OG ZX 8000 that recently re-released under adidas’ Consortium division.

This pair is made up of a mixture of smooth suede and mesh, featuring tonal elements throughout. The Three Stripes are outlined with a shadow-like grey hue, while the sole unit appears in white, blue and black. Rounding out this pair is a section of carbon fiber-esque components on the heel clip.

Take a look at the upcoming adidas ZX 8000 pairs in “Linen Green,” “Orbit Grey” and “Glow Blue” in the gallery above, and keep an eye out for their imminent release at retailers such as 43einhalb, where they will retail for €119.95 EUR (approx. $132 USD).

In case you missed it, check out the soon-coming Craig Green x adidas collaboration.