Christmas with the Kardashians never disappoints. And this year was no exception.

For the family’s annual holiday celebration, host Kourtney Kardashian spared no expense, decking the halls with white lights and red poinsettias and bringing in real-life elves on shelves, toy soldiers and, of course, Santa Claus.

“It was very festive,” a source tells E! News. “They had Beignet box, a cookie stand and cocktail bay for guests to mingle and make their way around the main dining room.”

“Tables were set up for people to sit but most people were making their way around the buffet of various foods and were grabbing plates and mingling,” the insider adds. “There was a variety of beef, chicken, mashed potatoes, grilled vegetables, various salads and desserts.”

“He definitely lost a chunk of weight and looked thinner in his face,” adds the insider. “Rob was in a great mood and seemed happy to be there. He was mingling with friends and was even on the dance floor chatting with his sisters. He tried to be low-key for a majority of the night. Kris was excited to see him out and gave him a big hug.”

The sweetest surprise, however, was a performance by none other than Sia, who added a festive spin to her signature wig, dying it red and green. “The Kardashian-Jenner girls love Sia,” explains the source. “All of the girls were dancing together. Kylie and Khloe were dancing together on the floor the most, having a lot of fun. They were rocking out to Sia’s ‘Cheap Thrills.'”

That was just the beginning of the musical acts, though. After Sia, Kanye West‘s Sunday Service choir took the stage. “His face lit up and he was very excited about them performing,” says the source. “Kim made a sweet speech beforehand, saying that Kanye has worked on this choir for a while not and put a lot of effort into it and is very proud of it.”

And while Scott and Sofia packed on the PDA—”Sofia never left his side,” adds the insider—friendly exes Kylie and Travis made sure daughter Stormi was having the time of her life.

“They took turns holding Stormi and were all dancing together to the music having fun,” explains the source. “Kylie invited Travis and made it clear she really wanted Stormi to see her mom and dad together to celebrate the holiday and was excited Travis made the effort. He’s still very much a part of the family.”

The same can be said for Kourtney’s on, off love Younes, who hung out with her throughout the evening.

“They were chatting while in a group of friends and there wasn’t any excessive PDA,” reveals the insider. “Kourtney was excited to see Younes. She gave him a big hug and had a smile on her face. Younes was definite flirting with Kourtney and enthralled by her.”

Keep scrolling for every picture from the extravagant bash!

“Most wonderful time of the year,” Kylie writes on Instagram. 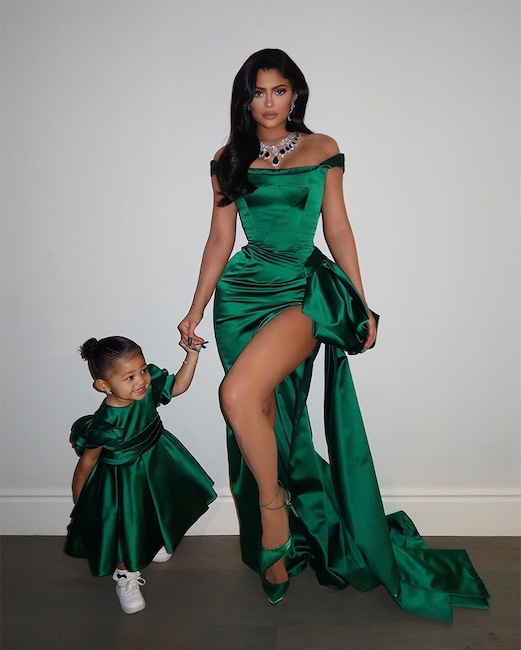 The two are twinning in custom-made Ralph & Russo dresses. 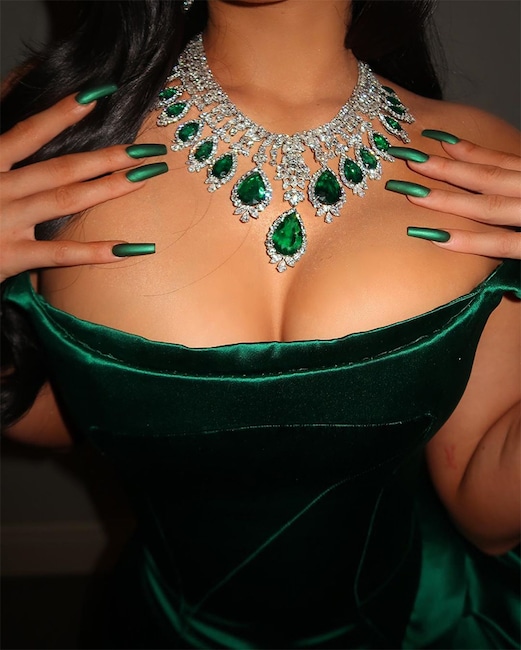 Kylie pairs her dress with an emerald and diamond choker. 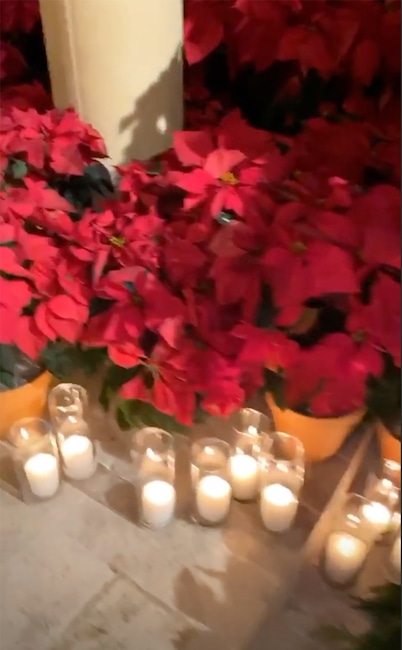 Rows and rows of poinsettias and candles adorn the entrance to Kourtney Kardashian‘s house. 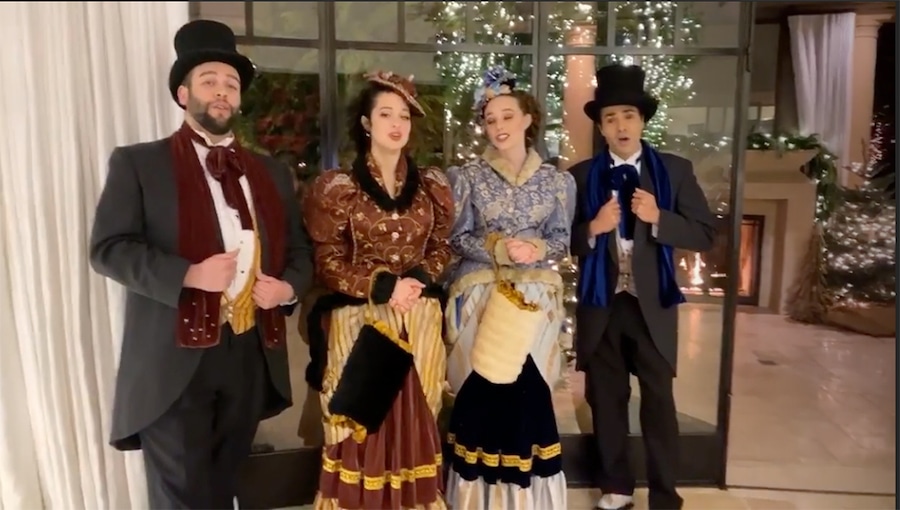 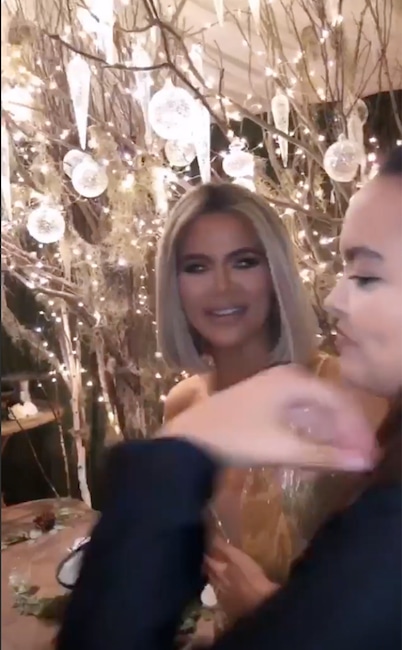 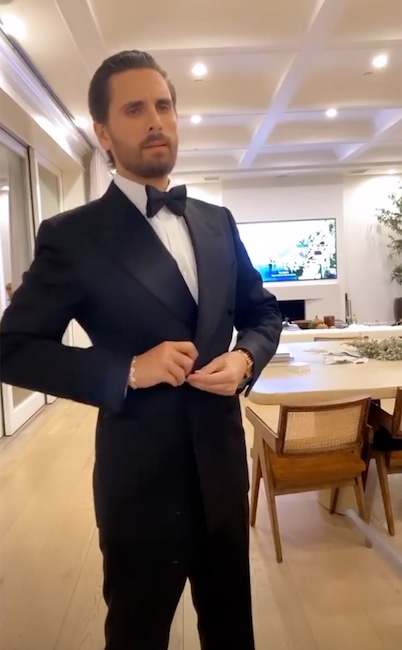 Kourtney Kardashian‘s ex and Sofia Richie‘s boyfriend gets ready for the party. 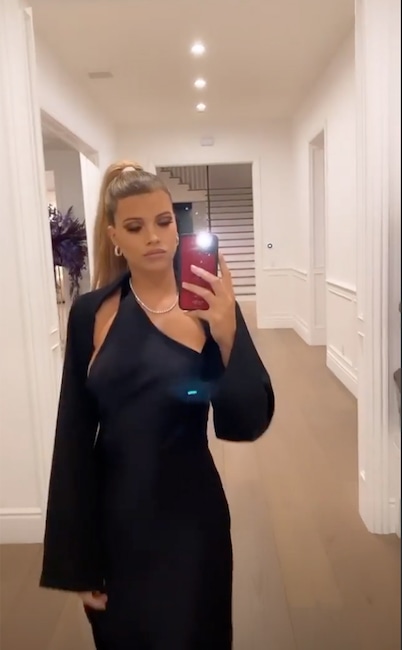 The model and Scott Disick‘s girlfriend takes a mirror selfie before the bash. 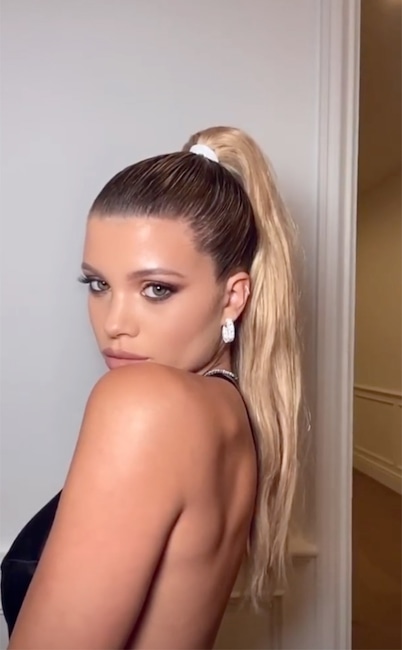 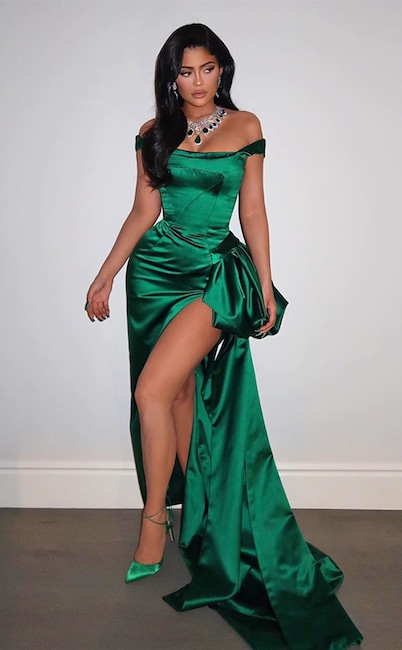 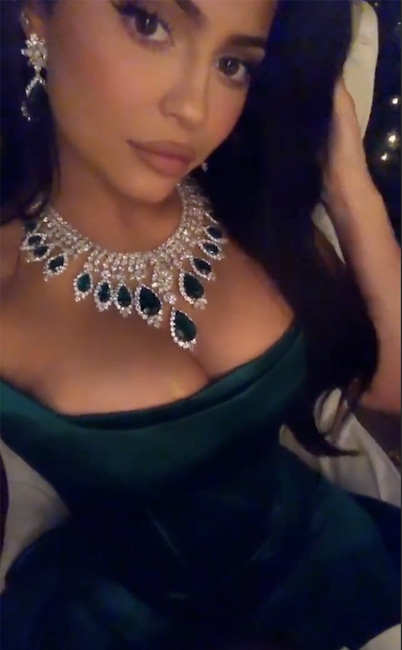 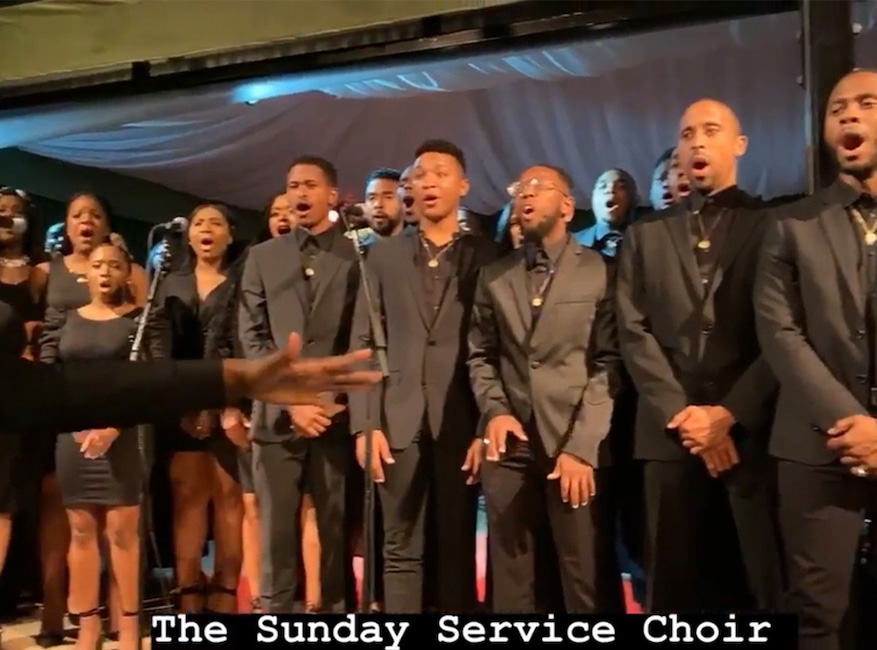 Kanye West‘s choir from his Sunday Service performs, of course. 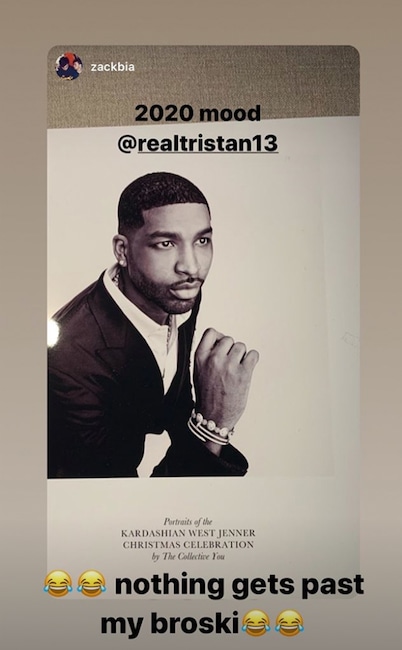 Khloe Kardashian‘s ex joins the celebrations, sharing a serious shot from the photobooth. 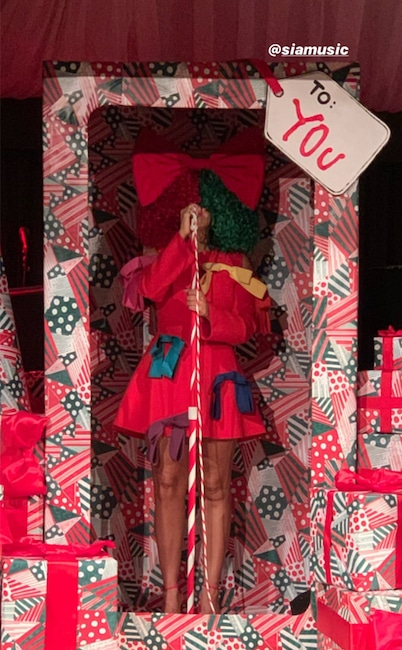 The superstar puts a festive spin on her signature wig, performing “Chandelier” from inside a life-size doll box. 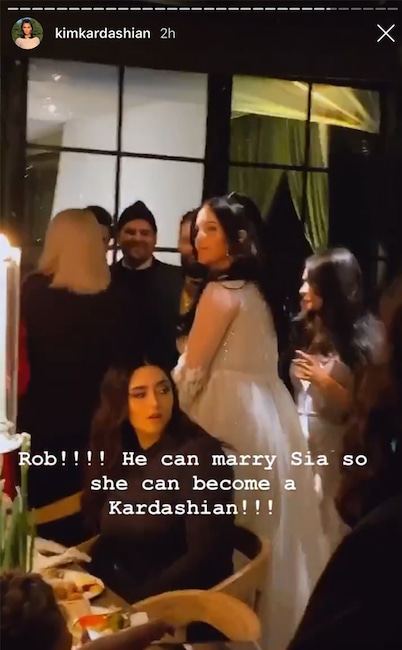 The best gift of all! The only Kardashian brother makes a rare appearance. 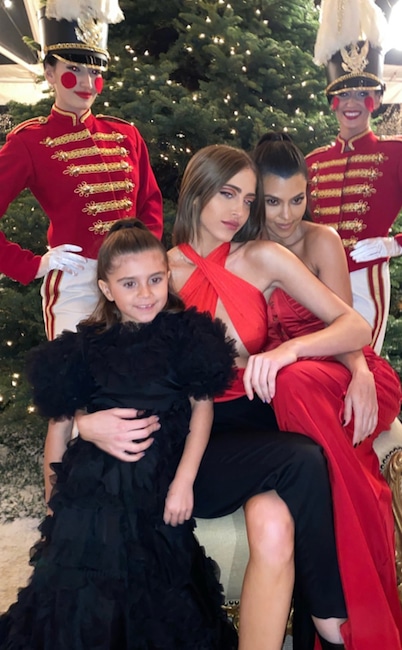 The mother-daughter duo sleighs in a picture with toy soldiers. 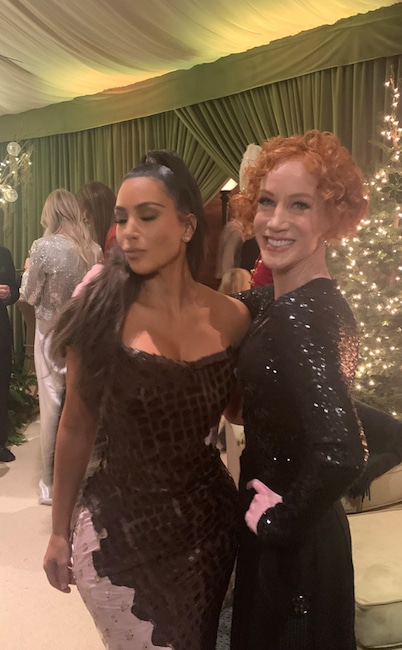 “She’s gonna kill me,” the comedian jokes after posting a shot where Kim isn’t looking at the camera. 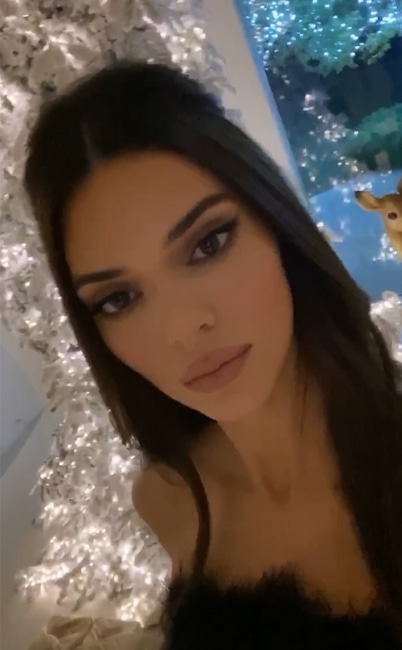 The model, wearing a red and black gown, snaps some selfies before heading the celebration.

—with reporting by Amanda Williams

Keeping Up With the Kardashians returns spring 2020, only on E!