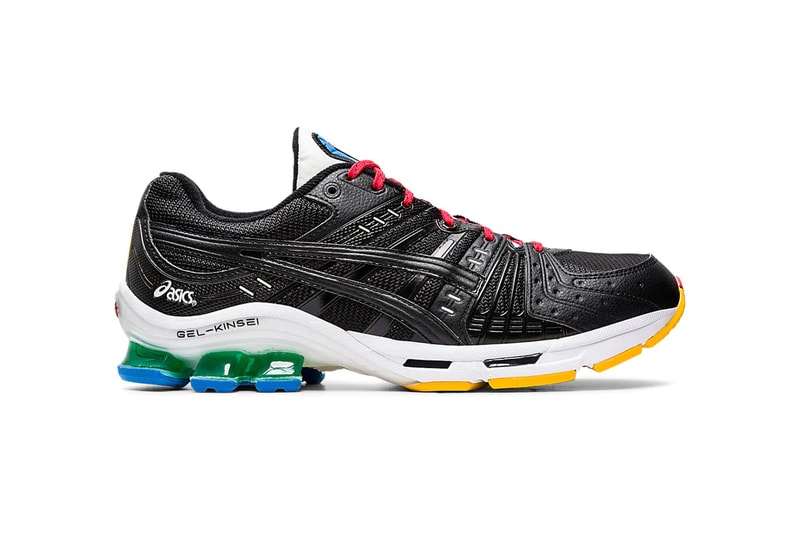 After returning to market for the first time in over a decade, ASICS‘ GEL-Kinsei OG is set to release in a colorfully-accented style. Following in the footsteps of a makeup that seemingly drew from the iconic Gundam RX-78-2, this Kinsei belies its mid-’00s heritage with a palette that’s decidedly more ’90s.

Black mesh and synthetic materials are layered on the upper between a white tongue and foam midsole with small black GEL forefoot pads for a simple-yet-technical look. This plays down the Kinsei’s base in favor of allowing the accents to do the talking, and talk they certainly do.

The heel’s signature six-pronged GEL cushioning system is dressed in a vivid green. It sits above a slab of blue AHAR+ rubber and below a yellow strip on the heel. The outsole’s forefoot then switches to red and yellow hues up front, both of which are visible from the side profile.

Red laces fully encircle the aforementioned white throat, and are contrasted by a blue badge. A full set of printed black coordinates runs from tongue to toebox, nodding to an as-yet-unknown location. Small branded hits are dispersed across the upper and midsole to complete the look.

This ASICS GEL-Kinsei OG will release on the ASICS webstore January 1 for $180 USD — a price that was sky-high in 2006, but is standard hat for high-end running silhouettes today.

The Kinsei isn’t the only classic runner from 2006 to make a comeback: Nike’s new Air VaporMax 360 is a bold reworked iteration of the classic Air Max 360.