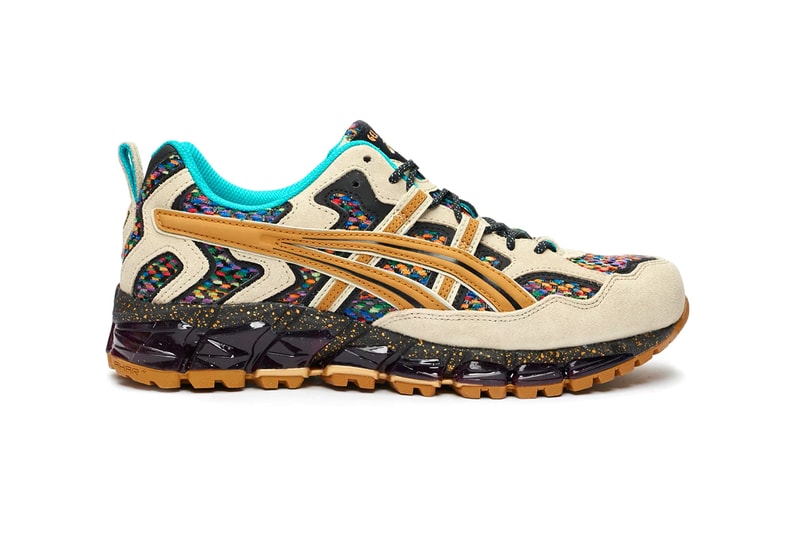 ASICS‘ GEL-Nandi 360 is a bold design with an appealing layered aesthetic, and now it’s ramping things up a notch with a new “Putty” colorway. Boasting intricate woven detailing on the upper and a signature GEL cushioning setup underfoot, this may very well be one of the Nandi 360’s most scintillating makeups yet.

Although the upper’s shape is borrowed from the original GEL-Nandi — a running shoe from the ’90s — the construction is all modern. A wide variety of shades ranging from blue to purple, green, black and orange are pieced together on the base layer while jagged, shaggy tan suede overlays add bold tone and texture in equal measures. Branded ASICS strikes across the midfoot take on a darker wheat hue for a rich contrast, and black trim serves as a buffer between various pieces of the wildly divergent palette.

A bright cyan shade on the sockliner and woven into the rope laces provides what might be the most vivid pop of color. Down below, the shaped black foam midsole is splashed with a tan speckle print while plush blocks of GEL cushioning run from heel to forefoot. A classic gum outsole composed of sturdy AHAR+ rubber finalizes the look.

The ASICS GEL-Nandi 360 “Putty” retails for $180 USD, and will release on February 7 at stockists like Sneakersnstuff.