Yesterday, Kylie – who is worth an estimated $900 million – posted a back-to-school-style snap of her toddler, sporting a light pink Hermes Taurillon Clemence Kelly Ado Backpack, which retails for an eye-watering $12K.

Bethenny, 49, took issue with the picture, writing on Instagram: ‘I never say anything about this stuff but this is the most transparent humble brag I’ve seen yet. It’s everything wrong with everything.’

Luxe life: Bethenny Frankel has slammed Kylie Jenner’s ‘back to school’ snap of Stormi, 2, with a $12K bag, commenting, ‘It’s everything wrong with everything’

The former Real Housewives of New York star was not alone in her feelings on the matter either, as her comment received almost 3,000 likes, as other users quickly chimed in.

‘We are in the middle of a pandemic. Some kids can’t even do distance learning because they are homeless with no computer no WiFi no home! This is disgusting,’ one person wrote.

Another female fan wrote: ‘Sad day when people are struggling with homeschooling their children being out of work or working from home and you are showing off a garage full of expensive cars and an expensive backpack for a child!!!!’

Not holding back: The former Real Housewives of New York star spoke out after seeing the picture on Instagram 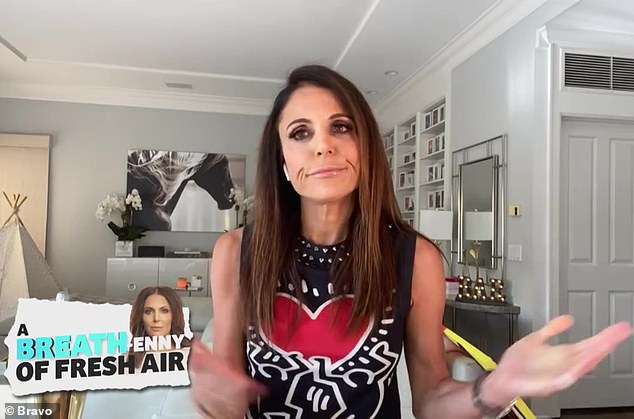 Taking issue: Bethenny, 49, said the picture of Kylie’s little one was ‘everything wrong with everything’

Adding: ‘There are children starving and families suffering!!! This is horrid! Where is the humbleness? Life isn’t about material things!!!’

One user questioned whether Kylie’s little one might prefer a more age-appropriate item of clothing, asking: ‘I’m wondering if these kids ever ask or beg for Hello Kitty or princessy backpacks etc. because normally a kid would. That is Hermes Kelly Ado in some exotic leather. Shocking!!’

Stormi, who is the daughter of Kylie and on/off ex Travis Scott, completed her back to school look with Air Jordans and a black dress, and a pair of delicate diamond earrings. 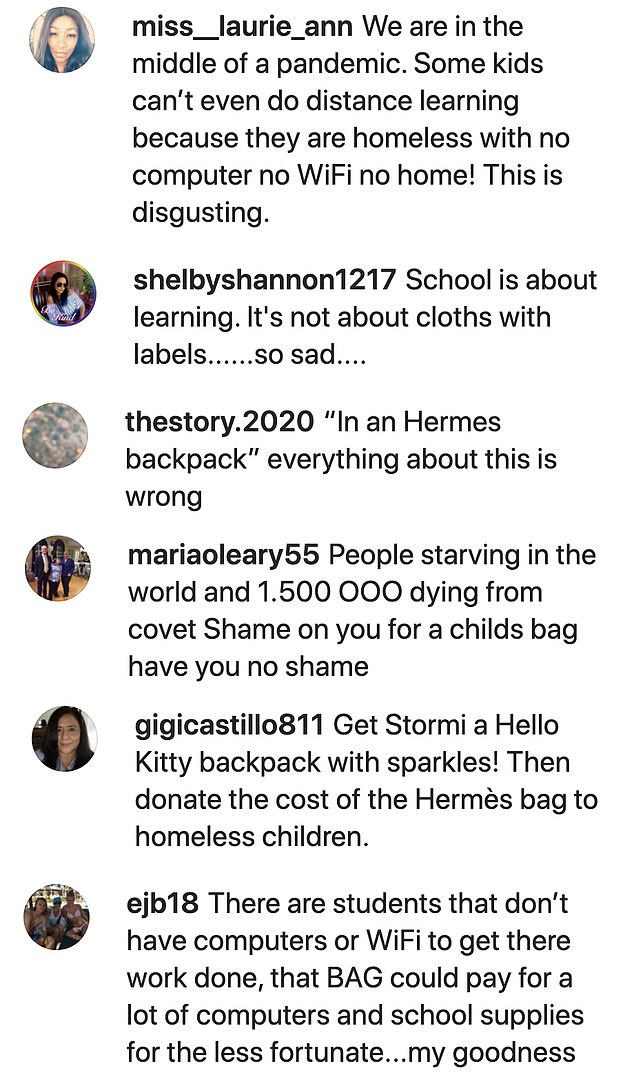 A chorus of disapproval: Bethenny was not alone in her feelings on the snap, as other chimed in online 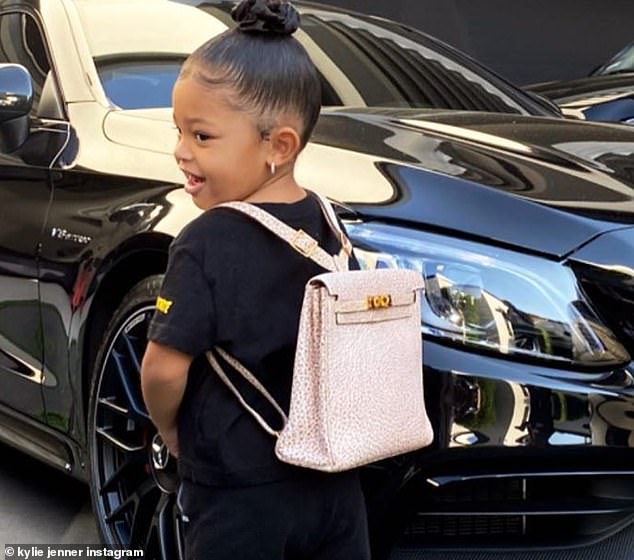 Kylie had captioned the Instagram Story ‘Back to schoooool’ as her daughter began her first day of home schooling at their home in Los Angeles.

Another video of the little one saw her dancing in Kylie’s garage amid her fleet of luxury sports cars, and one fan joked on her post: ‘Stormi wondering which car to choose.’

This is not little Stormi’s first designer bag; the tot has a wide variety of luxury bags even at such a young age. 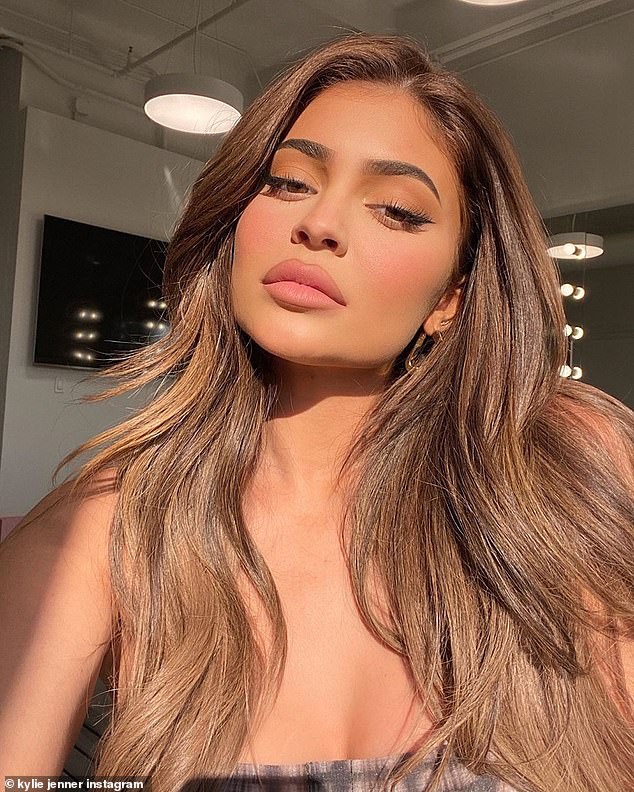 Life of luxury: Kylie captioned the image: ‘First day of home schooool!’ with Stormi posing in front of one of the star’s many luxury vehicles in the driveway 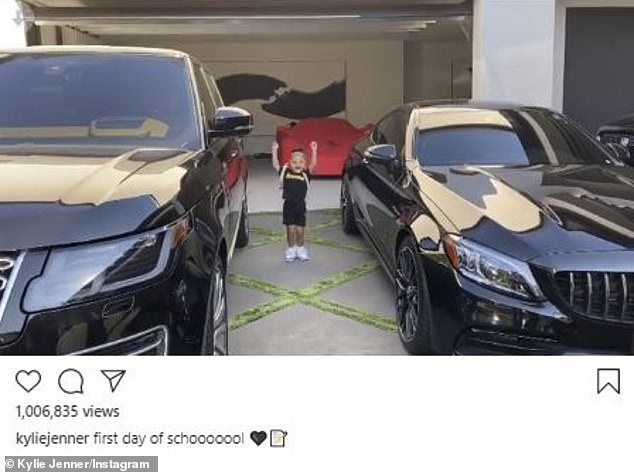 Exciting day: Soon after, Kylie shared a video to her Instagram of Stormi jumping up and down singing ‘first day of school!’

Earlier this year, her aunt Khloe Kardashian gifted her with a customized Louis Vuitton Weekender bag featuring characters from her favorite movie – Trolls – as well as her name Stormi – emblazoned on the bag.

The duffle bag costs almost $2k prior to customization.

In July, Kylie snapped an photo of Stormi as she posed with another bag – this time a vintage Louis Vuitton nano Speedy bag, which costs approximately $1,180 for a classic logo version.

However, Stormi held on to a white multicolored mini version from the luxury label’s famous collaboration with artist Takashi Murakami from spring 2003, making the cost significantly more. 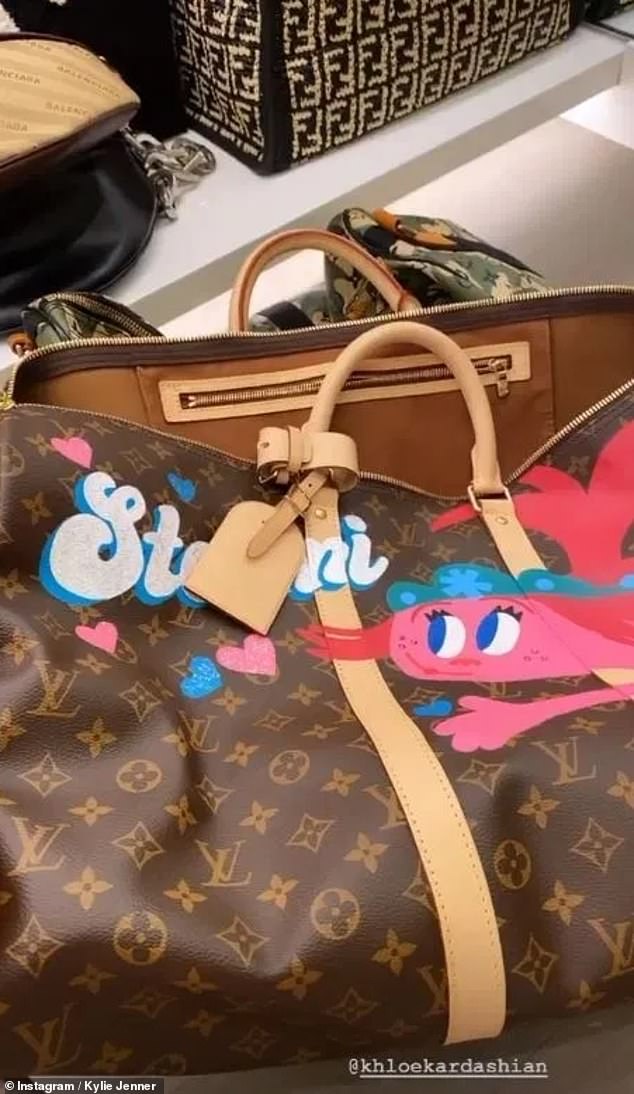 So cool: Earlier this year, her aunt Khloe Kardashian gifted her with a customized Louis Vuitton Weekender bag featuring characters from her favorite movie – Trolls – as well as her name Stormi – emblazoned on the bag

Louis Vuitton’s multicolor mini speedy bags are only available these days pre-owned and are highly coveted items on the re-sale market.

Last Christmas, Kim Kardashian gifted all the girls in the family with their own mini black Louis Vuitton nano Speedy bag.

Stormi’s Aunt Kim shared a snap to her Instagram story of the luxurious items and wrote: ‘I got these for all of the baby girls in the fam for Xmas from Japan.’

Kim purchased them for her two daughters, North and Chicago and her nieces Penelope, Dream, Stormi and True, but someone noticed there were two more bags left, which she revealed was for a back up measure in case there are more girls in the family.

She explained: ‘Oh wait I kept one for myself and extras for the future lol.’ 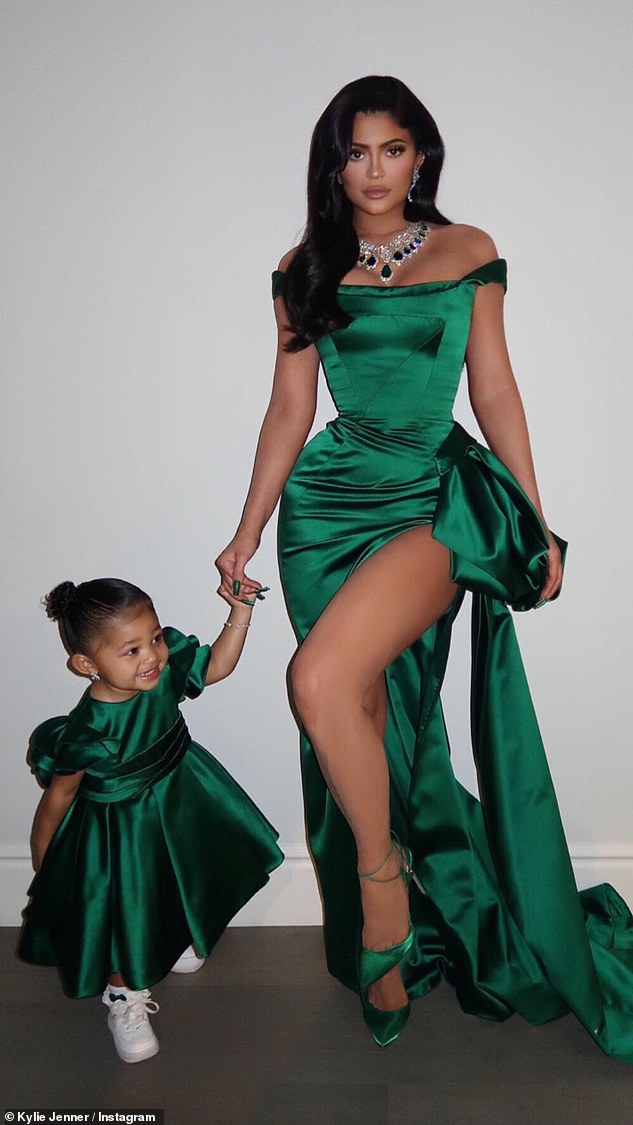 Life of the wealthy: Kylie has previously showed off her enormous accessories closet, which houses over $1 million worth of handbags, many of which are collector’s items

Stormi, who was 22 months at the time, picked it and swung it over her shoulder, which Kylie shared to her Instagram.

Kylie said in the caption: ‘Daddy dropped off a new chair for Stormi. And omg this girl threw the bag over her shoulder I can’t.’

Kylie previously said the $7.7K bag, which was a gift from older sister Kourtney Kardashian, was something she wanted to give Stormi as her first bag. 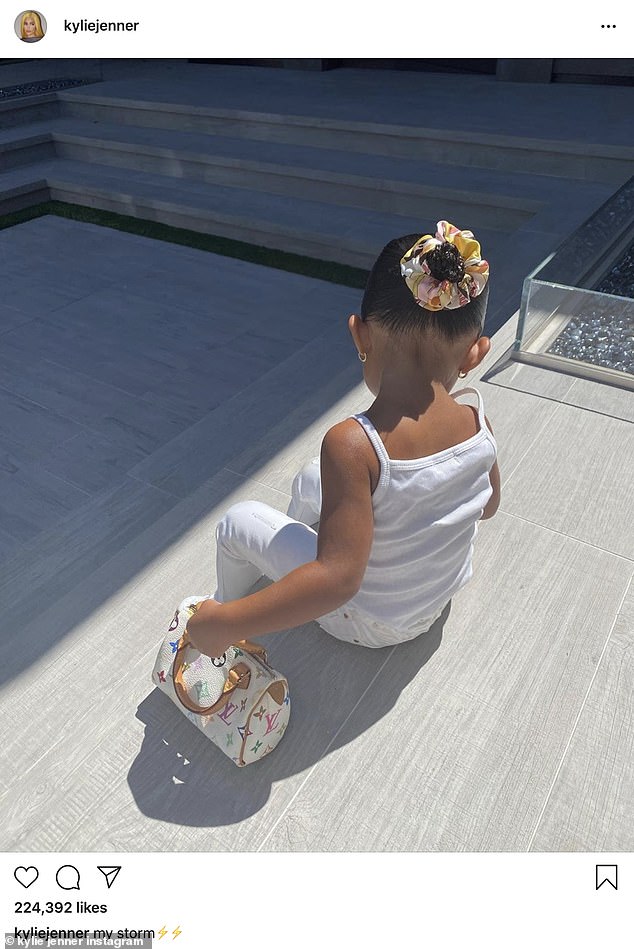 Wow: In July, Kylie snapped an photo of Stormi as she posed with another bag – this time a vintage Louis Vuitton nano Speedy bag, which costs approximately $1,180 for a classic logo version

In a YouTube video of her closet, Kylie said: ‘Kourtney gave me this, which I think is super cute. I was really surprised, because I feel like Kourtney never really cares about Christmas gifts, so when she gave me this last year, it was really special.’

Adding: ‘This one, I’m definitely going to let Stormi wear, probably, when she says, ‘Mommy I want to carry a purse.” So this is probably going to be her first purse.’

In the same video, Kylie revealed that she plans on giving her daughter the vintage Louis Vuitton Sac HL Mini Speedy bag that she has had since she was a child – gifted to her by mom Kris Jenner. The bag is worth approximately $620.

‘My mom gave these to me and Kendall when we were like super babies,’ she explains, ‘so I am definitely going to give this to Stormi.’