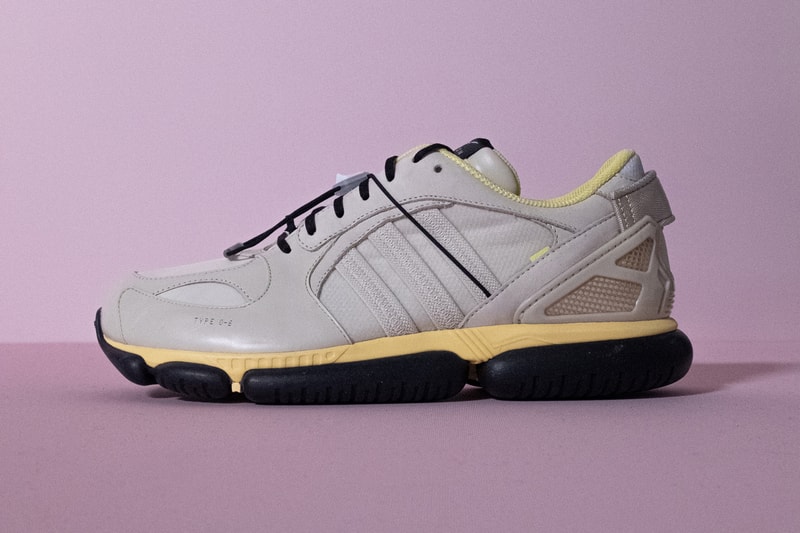 Luke Meyer’s OAMC and adidas Originals have readied the next chapter in their collaborative relationship: a brand-new silhouette dubbed the Type-O6. Drawing inspiration from adidas‘s influential ZX and Torsion line, the Type-O6 is rooted in running heritage, but also proffers a healthy dose of high fashion flair.

This inaugural colorway of the new silhouette takes on a subtle grey shade and offers plenty of layered detailing, which is most noticeable around the midfoot. Materials are mixed, with supple leather used for most of the overlays while synthetics provide the base layer and classic mesh is scattered around the heel cage. Branding is kept subtle as well, with a tonal Three Stripe graphic, black tongue badge and debossed Type-O6 hit on the mudguard. Black laces with a toggle system secure the foot, while a soft pastel yellow sockliner completes the top half.

Down below, the ZX-indebted EVA foam midsole is intentionally yellowed to give off a weathered, aged look for a nod to the line that inspired the design. A futuristic pod-like black rubber outsole grounds the Type-O6 both literally and figuratively, presenting an appealingly jarring contrast with the heritage-geared midsole.

An official release date for the OAMC x adidas Originals Type-O6 has not yet been announced, but it’s likely to debut later this year alongside OAMC’s FW20 line.

adidas Originals has been busy on the collaborative front this week, with Nigo recently teasing a HUMAN MADE Stan Smith.