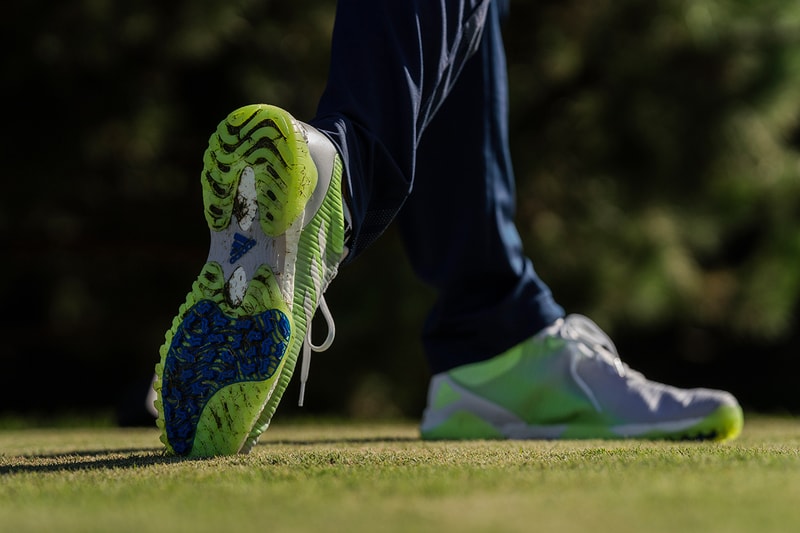 UPDATE: After the Palace x adidas Golf collaboration was announced earlier this week by way of a teaser video, we now have a first look at one of its offerings: a new footwear silhouette. Worn by PGA pro Joaquin Niemann during the Genesis Invitational, the style boasts a look that’s equal parts sporty and elegant.

Proffering an upper shape reminiscent of 2015’s Palace x adidas Pro Boost, the design is mostly constructed of perforated white leather. Solid white leather appears around the midfoot’s Three Stripe graphic, and “Palace” is stamped in gold foil as well. An external white TPU cage provides support around the heel, and a ridged white midsole with exposed BOOST foam in the heel nods to previous adidas Golf models like the Powerband BOA.

Expect more info and images of other Palace/adidas Golf product to trickle out as the PGA Tour rolls along and Palace’s Spring 2020 line continues making its way to market.

ORIGINAL STORY (February 12, 2020):Palace has taken to its Instagram account to tease a new collaboration with adidas Golf by way of a humorous video starring Sir Nick Faldo. Over the course of the short clip, the Golf Hall of Fame member and beloved on-air analyst fiddles with his cell phone and expounds on the difference between how adidas is pronounced in the US and the UK, quipping “Do you say AH-dee-daz in America? In Britain we say AH-dee-daz, not ah-DEE-das.”

No further information on the collaboration has been announced, but with the logo mixing white and electric green it’s possible that select collaborative pieces may be plucked from adidas Golf’s CODECHAOS line, which uses the same hues. There’s also a brief look at a Palace golf ball logo during the video’s final seconds.

Palace is certainly no stranger to collaborations centered around sports other than skateboarding: in 2019 the brand teamed with adidas Soccer for a Juventus collaboration, which followed up an adidas Tennis collection released for — and worn at — Wimbledon 2018.

See the teaser video directly below, and stay tuned for an official announcement soon. While you wait, take a gander at Palace’s spring 2020 lookbook.