Gemma Collins aspires to be the new Princess Diana and help those less fortunate – after retiring her GC alter ego and finally finding confidence in herself.

The TOWIE star, 39, told MailOnline she has always ‘hid behind’ the GC as a way of coping with her insecurities after being branded ‘the fat one’ by cruel trolls when she first joined the ITVBe series.

After years in the spotlight, Gemma has decided she’s finally ready to step out from behind the caricature she created of herself and give up the ‘razzle-dazzle’ of fame to focus on charity work, as Gemma Collins. 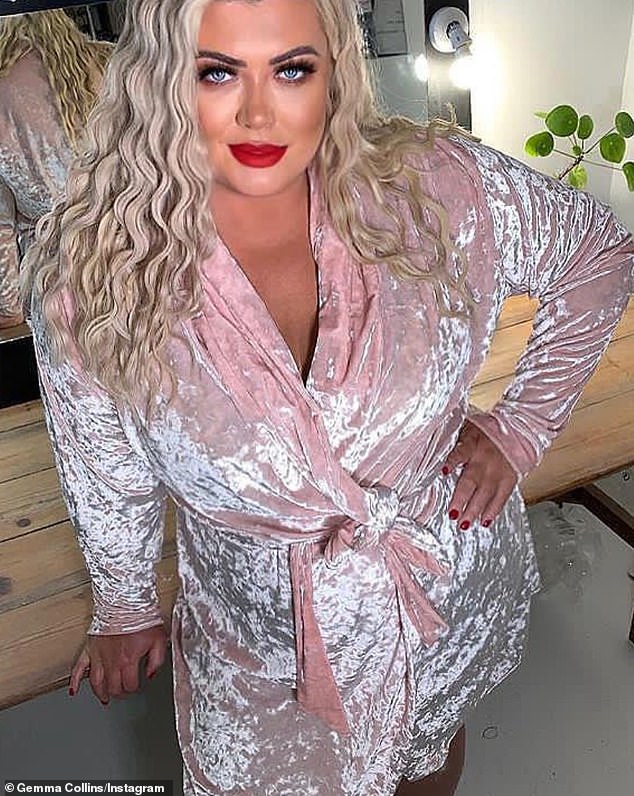 ‘I am totally at peace with myself’: Gemma Collins aspires to be the new Princess Diana and help the less fortunate – after retiring her GC alter ego and finally finding confidence in herself

Gemma came to the realisation she was ready to fully embrace her true self after recognising the success she has achieved over the years, and seeing the impact Princess Diana made while watching Netflix series The Crown.

In an exclusive interview with MailOnline, Gemma revealed: ‘I am hanging up the GC next year. She is going on ice, not full time but I turn 40 in January and I am very confident in myself now as a woman.

‘I have made my own success through hard work and no one can take that away from me. I did it against a lot of adversity – from when I first stepped on TOWIE, the trolling, the “she’s the fat one” “she’s this, she’s that.”

‘But to be honest, this fat girl has not done badly for herself. I have always hid behind the GC because of my insecurities and not being good enough or confident to be Gemma Collins. But now, since the pandemic, I am totally at peace with myself. 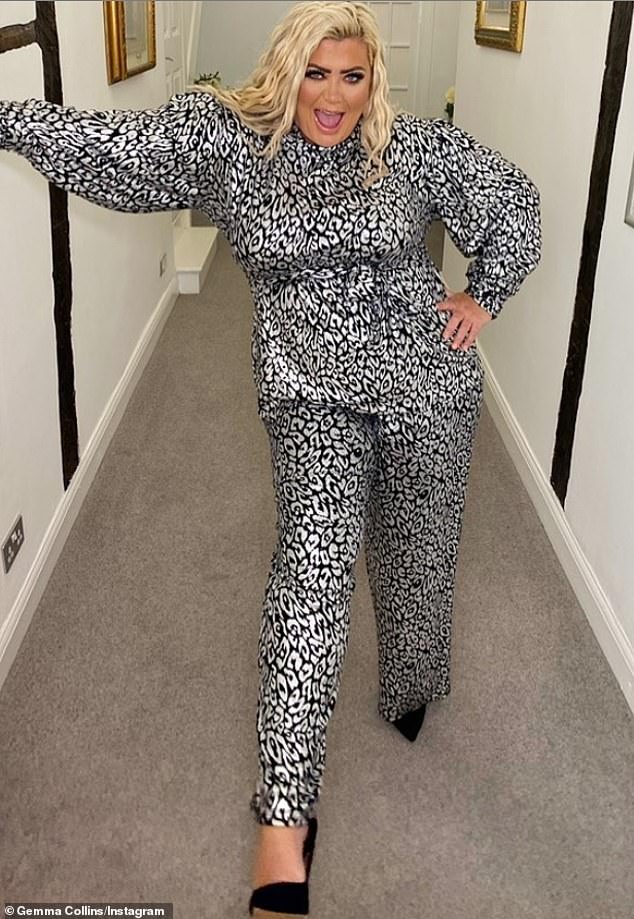 ‘I am confident in myself now’: The TOWIE star, 39, said she has always ‘hid behind’ the GC as a way of coping with her insecurities after being branded ‘the fat one’ by cruel trolls 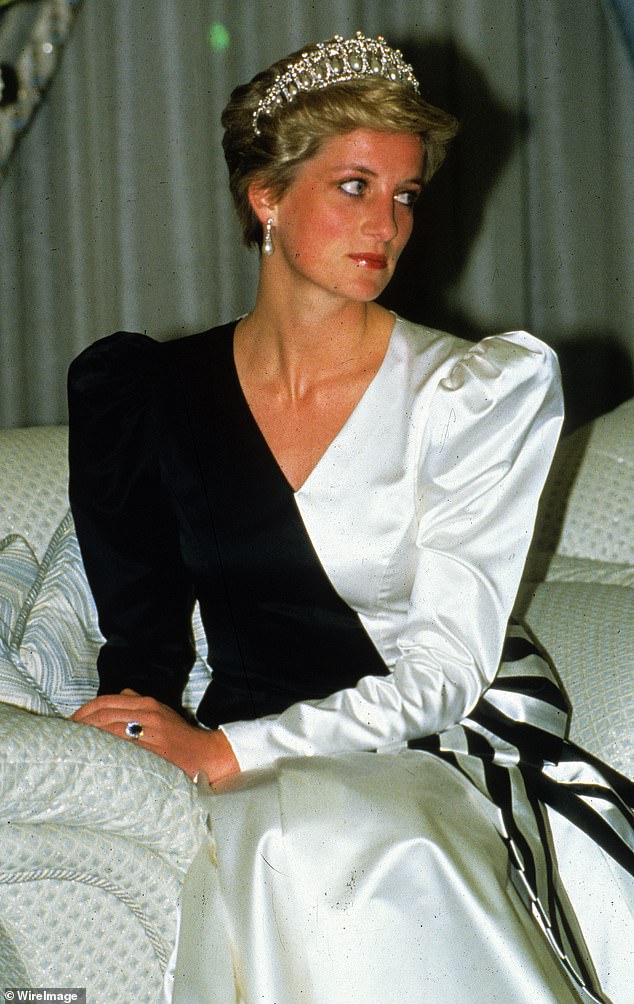 ‘I know she was a princess and I’m not’: Gemma came to the realisation she was ready to fully embrace her true self after seeing the impact Princess Diana (pictured in 1986) made

‘I have been watching The Crown recently and Princess Diana, I know she was a princess and I’m not, I’m a Romford girl, but she has done some amazing projects.

‘There are still some countries that don’t have water, what’s that all about? I want to concentrate on that side of things, more things that are important and less of the razzle-dazzle.’

In the 10 years since Gemma joined the cast of TOWIE as a car salesperson, she has gone onto have her own reality show, Diva Forever, BBC podcast and has become known in pop culture for her one-liners, including ‘I’m claustrophobic Darren,’ that has been engraved into a sell-out decorative bauble this Christmas.

Despite her popularity, Gemma was dreading turning 40 in January and even considered having therapy before fellow reality star Kim Kardashian showed her it’s not all bad reaching the milestone. 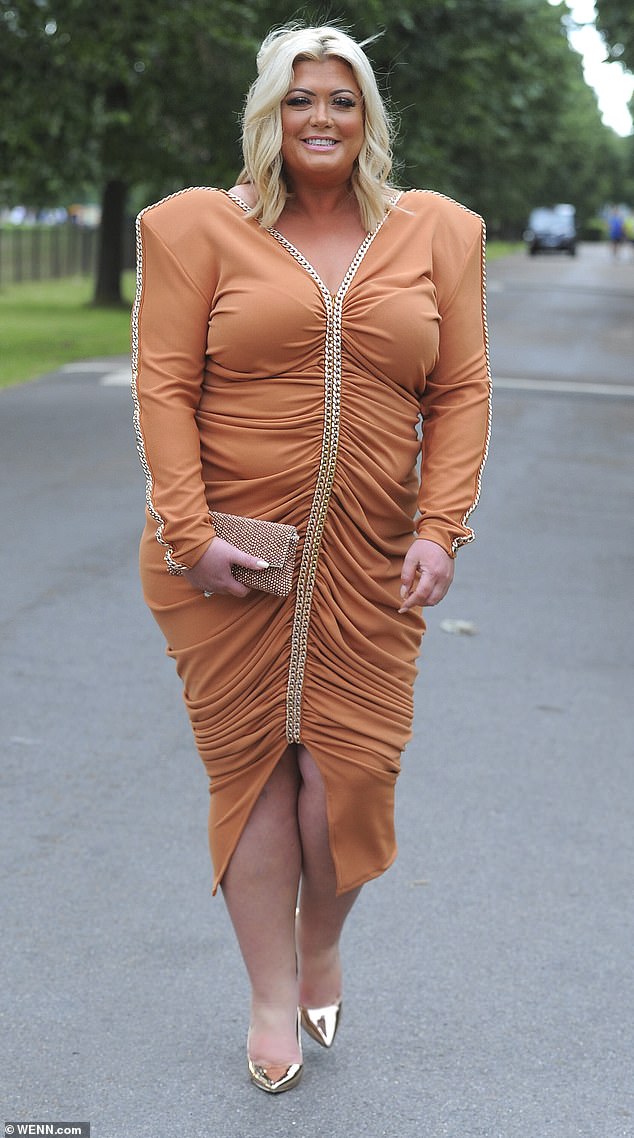 Iconic: Gemma, who’s famed for TOWIE, her show Diva Forever and BBC podcast, has hit the headlines over the years as the GC, including for wearing a dress with shoulder pads in 2017

She continued: ‘I have done the GC bit now and I want a year where I explore myself. In the pandemic, I couldn’t run.

‘The only person I couldn’t run from was myself. I was lucky but my work and friendship cycle stopped, so I was living 24/7 with me, myself and I and actually I thought “I’m just going to be Gemma Collins next year.”

‘I was dreading turning 40 and I actually considered having therapy over it and I thought “how am I going to deal with turning 40?” Although I am 40, in my heart and soul I’m still 25.

‘But then Kim K made it totally acceptable. In my 40s I want to be more Gemma Collins. I have a lot to say and good to do within myself – not everyone needs the GC all the time because it’s quite exhausting.’ 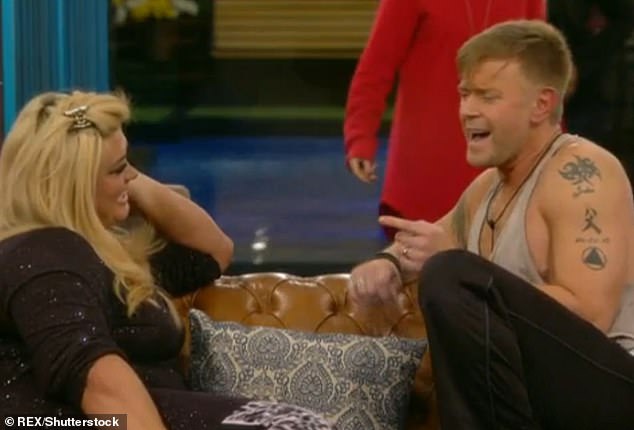 ‘I would love it to get to No1’: Gemma has released a Christmas charity single this year with her former Celebrity Big Brother pal and West End singer Darren Day 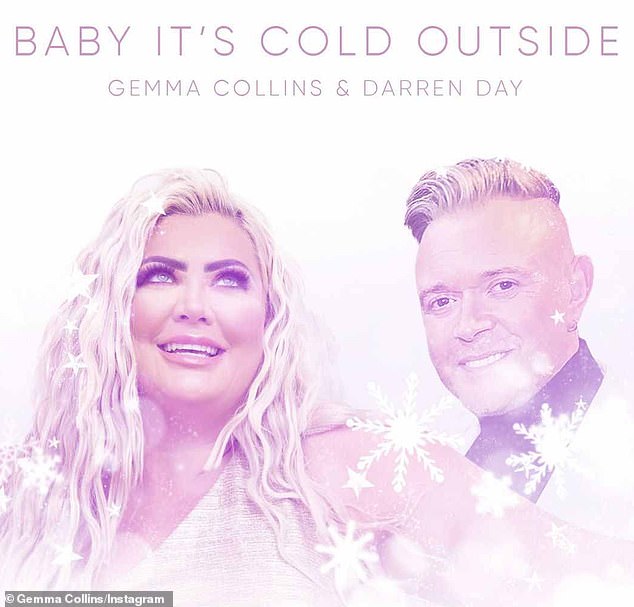 ‘I was in shock he even knows who I am’: The track has already received praise from pop star Robbie Williams, who Gemma said she’s never had the courage to approach at ITV parties

Gemma is hoping one triumph she can tick off her list in 2020 is topping the charts with her Christmas duet of Baby It’s Cold Outside, performed with her former Celebrity Big Brother housemate and pal, Darren Day.

The TV personality was shocked to discover she had impressed pop star Robbie Williams, 46, with her vocals, who said the charity single with former West End performer Darren, 52, is a ‘cracker.’

She said: ‘Darren called me up and said “look I’ve been speaking to RW the other day” and I said “who’s RW?” and he said Robbie Williams, because they’re friends, and he I went “I played him the song and he thinks it’s fantastic” and I said “you’re joking?”

‘Robbie is a genius. I was in shock he even knows who I am. I have seen him at ITV parties before but I’ve always been a bit too nervous to say hello because I really loved Robbie as a young girl and I love his music. I have been close to him in a room but I lost my bottle. 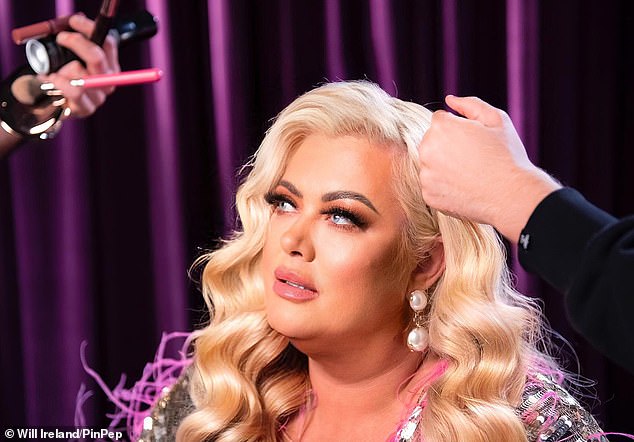 ‘I lost my bottle’: Gemma said she’s always been ‘too nervous’ to say hello to Robbie after loving him and his music in her younger years

‘He sent me a lovely video wishing me well and said “thank you for making me laugh and smile.” My Christmas has been made – to get a nod from RW to the GC my Christmas has totally been made.’

Gemma is donating 100 per cent of the single’s profits to charity Rethink Mental Illness and has pledged to do a sky dive if the track is this year’s Christmas No1.

She added: ‘I would love it to get to No1 because I had so much fun making it and I hope it cheers everyone up but not only that, we just had a ball making it and it really lifted my spirits.

‘I wouldn’t go naked if it got to No1 – to be honest so many people are cavorting themselves on Instagram and I don’t really agree with it.

‘Call me a bit old fashioned but no – it’s all gone a bit far. I wouldn’t go naked to celebrate but I might do a sky dive if it got to No1. I would have to do something spontaneous on the day.’ 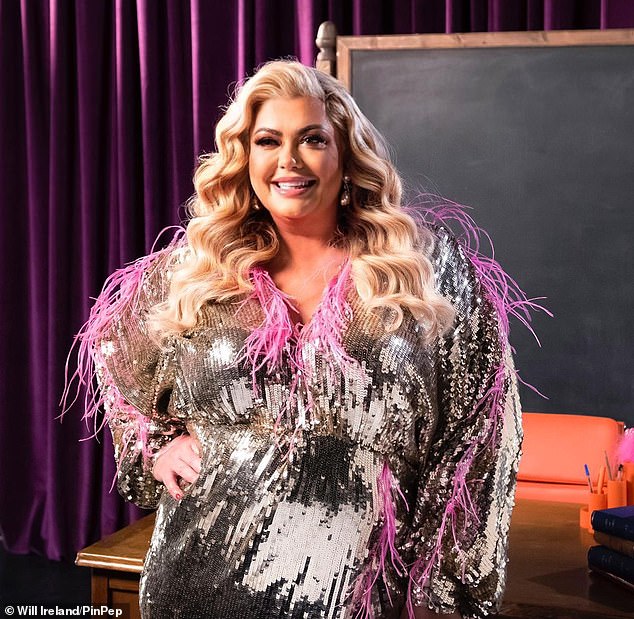 ‘Call me a bit old fashioned but no’: Gemma isn’t up for posing naked in celebration of the single reaching No1 as she disagrees with ‘so many people cavorting themselves on Instagram’

Gemma has collaborated with BravoSpeed, which is a new free-to-play lottery app that has already created one of the biggest online communities with those taking part.

Talking about her involvement with the app, Gemma said: ‘Basically I am a huge fan of bingo and I love playing bingo.

‘With BravoSpeed it is completely free to play, it is a lottery app for over 18s. It is so quick and with everyone just needing a boast right now, it’s fast, you can win big prizes, and what I love about this, everyone is probably more impatient now due to the lockdown, it’s literally the fastest lottery app on the market.

‘You get a draw every three minutes and you can win up to £4.2million – it’s absolutely fantastic. It’s completely free, all you have to do is watch the short advert and play, and it’s fun. 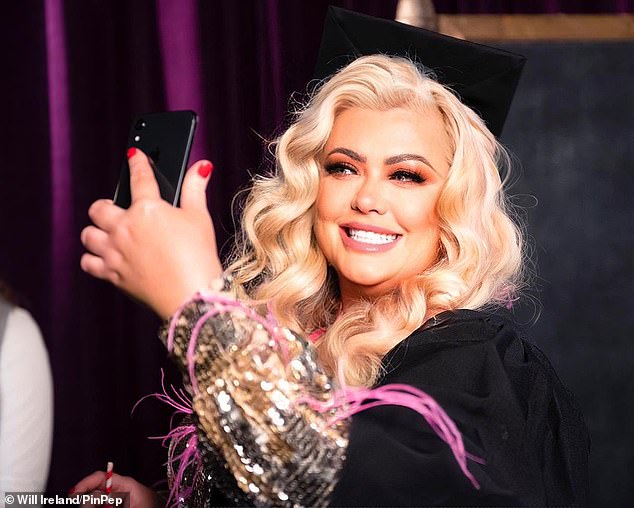 Work: Gemma has collaborated with BravoSpeed, which is a new free-to-play lottery app that has already created one of the biggest online communities with those taking part

‘BravoSpeed has one of the biggest online communities on their app and across their social channels – everyone is missing seeing their friends at the moment so it’s easy to invite friends and join the fun and play along with you in the game.’

She added: ‘Another thing I like about it, as you know with me, I like everything to be above board, it is fair, the draws are chosen by an independent adjudicator and literally BravoSpeed have already given away over £1million since its launch.

‘It has been just incredible the amount of money you can win and it’s fun and free and think more than ever people need this.

‘I am backing it because I think this is the fun that people need; bingo has got me through lockdown.’