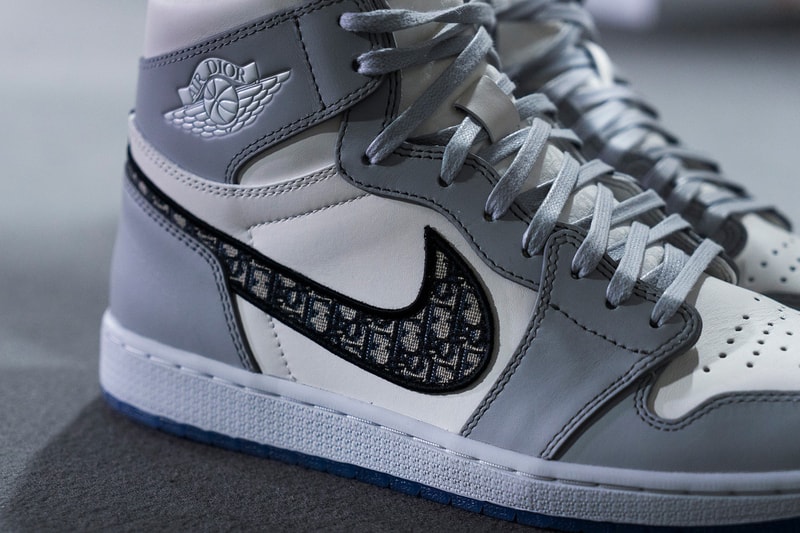 We first saw the Dior’s collaboration with Jordan back in December, in the form of the Dior x Air Jordan 1 High OG. Now we finally have a glimpse at the rare low-top version of the highly-anticipated Kim Jones-designed sneaker.

The high-top was revealed as part of Dior Men’s pre-fall 2020 show in Miami. Just a month later, Parisian photographer Karl Hab has taken to Instagram to show off a low-top version of the Dior Jordans, spotted at Daniel Arsham‘s Paris exhibition.

Like the Dior Air Jordan 1 High, the low version features Dior’s popular oblique motif on the Nike swoosh along with panels of “Dior Grey” and cream throughout the shoe. The low-top maintains the co-branded “AIR DIOR” on the tongue, albeit without the emblematic Jordan wing motif.

The low-top version of the Dior x Air Jordan 1 will be in even more limited supply than the high-top iteration. Just 8,500 high-tops wil be available — in homage to the launch of the Jordan 1 in 1985 — while only 4,700 low-tops will be sold. The latter number honors the launch of Christian Dior’s New Look in 1947.

Both the Dior x Air Jordan 1 high-top and low-top are slated to launch in April 2020. The collaborative sneakers will be sold exclusively at Dior stores throughout the world.

In other Jordan news, be sure to check out HYPEBEAST France’s exclusive look at the Air Jordan XXXIV “Paris.”