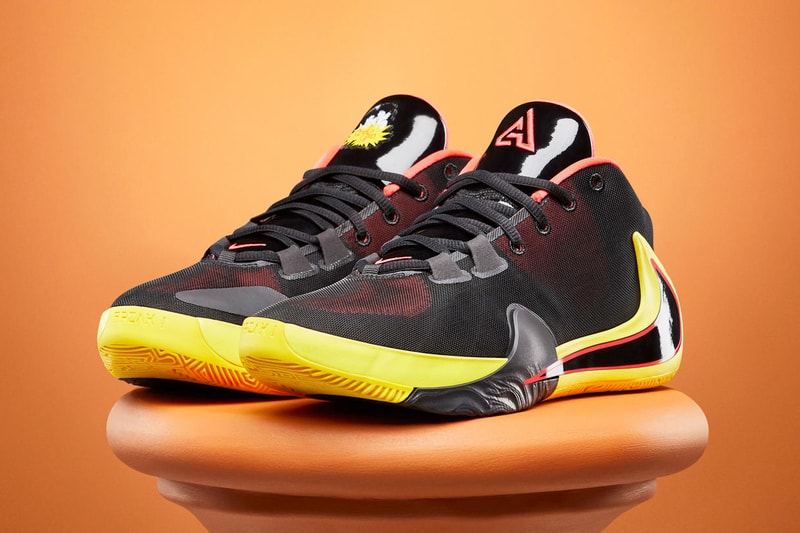 Nike has presented a new “Soul Glo” iteration of reigning NBA MVP Giannis Antetokounmpo‘s Zoom Freak 1. A continuation of the ‘Coming To America’ collection that debuted this July, these Zoom Freak 1s nod to one of the movie’s most memorable moments — namely, the “Soul Glo” spray-on hair product commercial that inspires Eddie Murphy‘s Price Akeem to take a trip to the barbershop.

The smooth and sultry advertisement features rich golden and yellow tones, which is where this new shoe draws its colorway inspiration from. Mesh uppers, patent leather tongues and large reversed midfoot Swooshes are all dressed in black, while yellow-gold and bright red provide the accents. The former appears mostly on the midsole and medial side’s Swoosh, while the latter is used on the upper’s underlays and as trim around the aforementioned midsole Swoosh and on the sockliner.

Plenty of special branding is present as well. The right shoe’s tongue swaps out its signature Giannis wordmark for a classic Soul Glo logo, complete with the two Jheri-curled actors from the commercial. Each heel tab features an embroidered text graphic, and Soul Glo is stamped one more time on each insole for good measure. Although the shoe is inherently light-hearted, there are some more serious features — namely, “I Am My Father’s Legacy” debossed on the outsole, a nod to the Milwaukee Bucks‘ forward’s late father. The names of his three brothers also make an appearance, and although it’s not visible a double-stacked Zoom Air unit in the heel offers cushioning.

Influential composer Nile Rogers was the man behind the Sol Glo jingle, and even went as far as semi-seriously calling it his “finest piece of work,” so he’ll be happy to know that this shoe inspired by his song is releasing December 28 via Nike SNKRS. The retail price is set at $130 USD.