She has amassed millions of followers thanks to her sensational curves and sultry social media uploads.

And Demi Rose revealed exclusively to MailOnline on Wednesday, how she shot to stardom at the age of 14 after being bullied in school.

The Instagram sensation, 25, disclosed that she still struggles with body insecurities, and predicts changes to her physique as she plans to have children in the future. 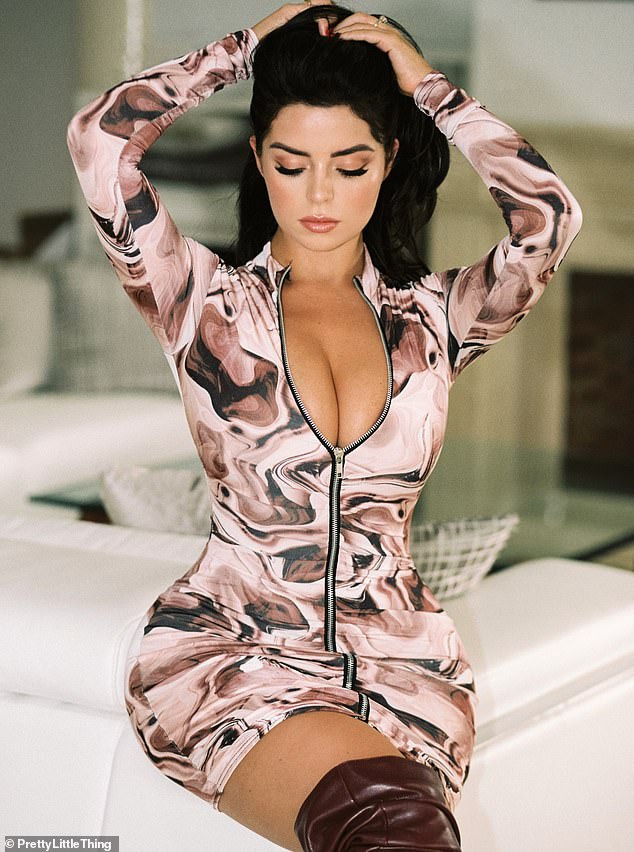 Finding acceptance: Demi Rose admitted to MailOnline on Wednesday that she still struggles with body insecurities and discussed being bullied by teachers and students at school

In an interview to promote her new PrettyLittleThing collection, she said of being drawn to social media at an early age: ‘I was bullied in school, I wanted to make friends outside of it so I ended up spending a lot of time online.

‘I was even interested in virtual reality as a kid, I was always on the computer and then MySpace came around and I found my calling.’

The Instagram influencer experienced her first taste of fame when pictures of her on the beach as a young teenager went viral on the social media platform.

The images were then dispersed onto fake online profiles and adult entertainment sites without her permission. 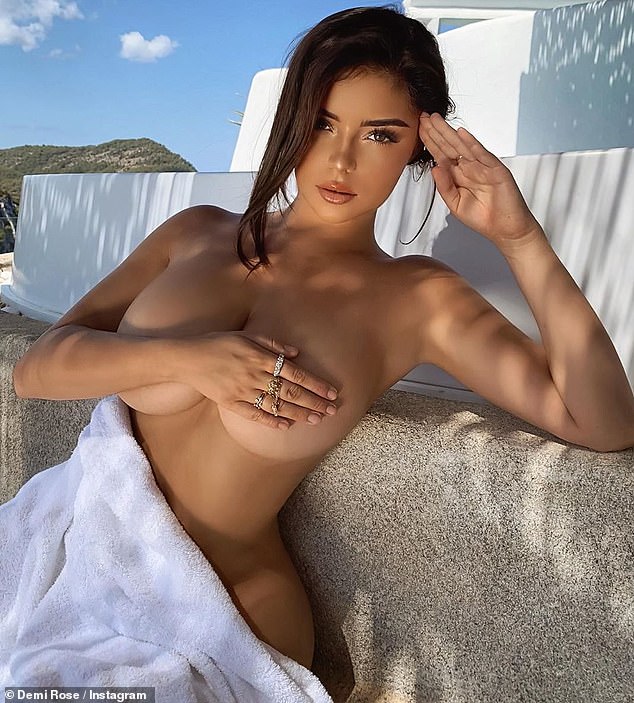 It’s a journey: The Instagram sensation, 25, also revealed how she shot to stardom at the age of 14 and predicts changes to her physique as the plans to have children in the future

Demi added: ‘I only ever got Instagram because someone made a fake profile of me on there with 3000 followers and I was really envious.

‘I was like, “wow, how can someone using my pictures get that much?” And then I just started an account and it went from there.’

From the age of 18, the brunette bombshell – who currently boasts over 14.9million followers-  signed with a modelling agency and her career went from strength to strength.

However, while still studying to become a beauty therapist, she recalled how teachers would congregate to gossip and speak disapprovingly about her work.

She reflected: ‘I never found my place in school, people were quite nasty and I guess I was just different, people were drawn to picking on me and since leaving, I’ve blossomed.

‘Now I just block out any negative comments, I can’t see anything that I don’t want to see because I don’t want that to impact my own thoughts about myself. I’ve had to grow a very thick skin.’

Despite putting the past behind her and learning to cope with disparaging comments, Demi admitted that she still has moments where she struggles with her own body confidence.

She has previously admitted to trying non-surgical procedures including a cellulite reduction treatment, however the Instagram model is focused on cultivating beauty from within and credits her healthy lifestyle as the secret to staying on top form.

Demi added: ‘I’m comfortable in my skin, but I’m never going to be 100% happy because everyone wants to be a certain way and we all have our own hang-ups, but I work out five to six times a week for my general health and wellbeing.’ 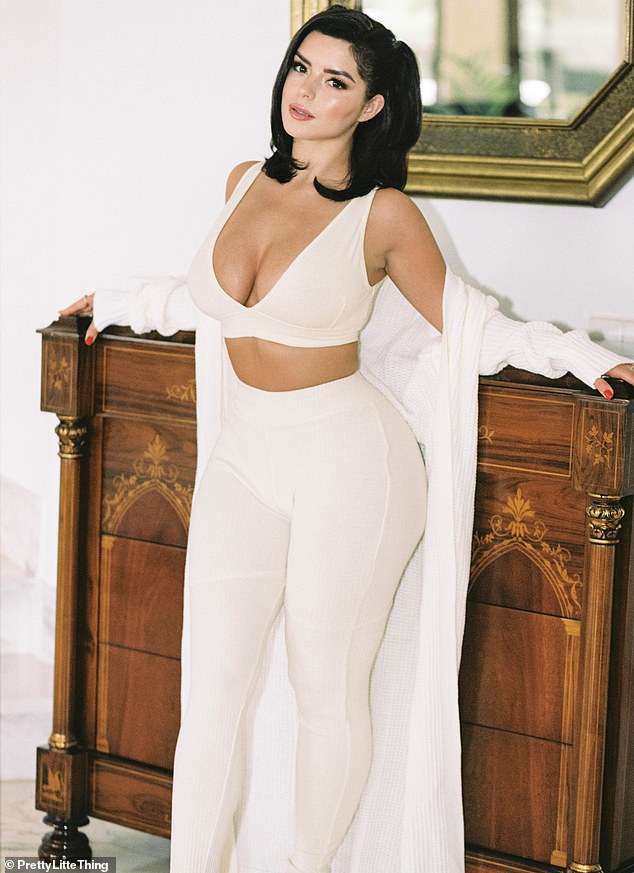 ‘Make all girls feel super confident’: Demi is embracing her incredible curves for her new collection with PrettyLittleThing which launches on Wednesday 9th December

When asked if she would consider surgery in the future, she responded: ‘I would prefer to go down a holistic route and just exercise more, because sometimes procedures can turn out looking bad so it’s better not to risk it. But I’m not sure how I’ll feel when I’m older.

‘I work out to feel good, and I eat properly. I avoid as many carbs as possible, I don’t eat dairy, I don’t eat meat, I don’t do refined sugar. I like to glow from the inside out.’

Demi is nevertheless embracing her incredible figure for her collection with PrettyLittleThing which launches on Wednesday 9th December.

As an ambassador for the brand, she said of her new edit: ‘I like something that fits the body well and something that complements women. It was important for me to include pieces that make all girls feel super confident.’

Despite being previously linked to Kylie Jenner’s ex-boyfriend, Tyga, Demi credits the make-up mogul’s sister, Kim Kardashian, as a style inspiration and she admires her career achievements. 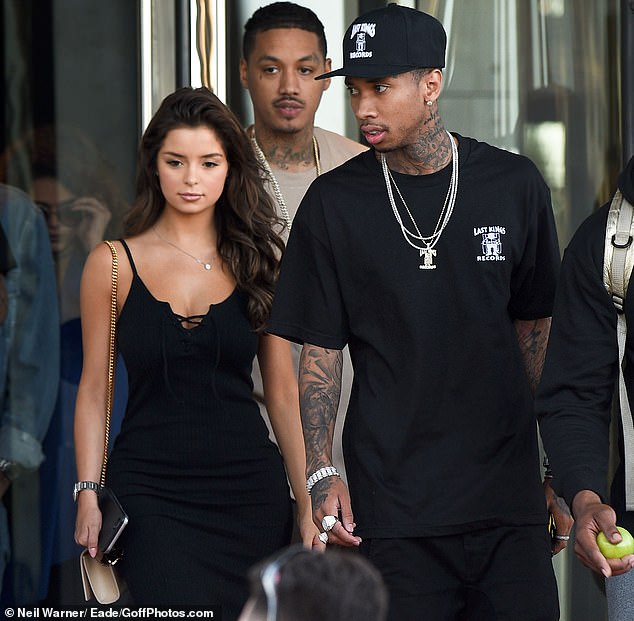 The past: Despite being previously linked to Kylie Jenner’s ex-boyfriend, Tyga (pictured in 2016), Demi credits the make-up mogul’s sister Kim Kardashian as a style inspiration and admires her achievements 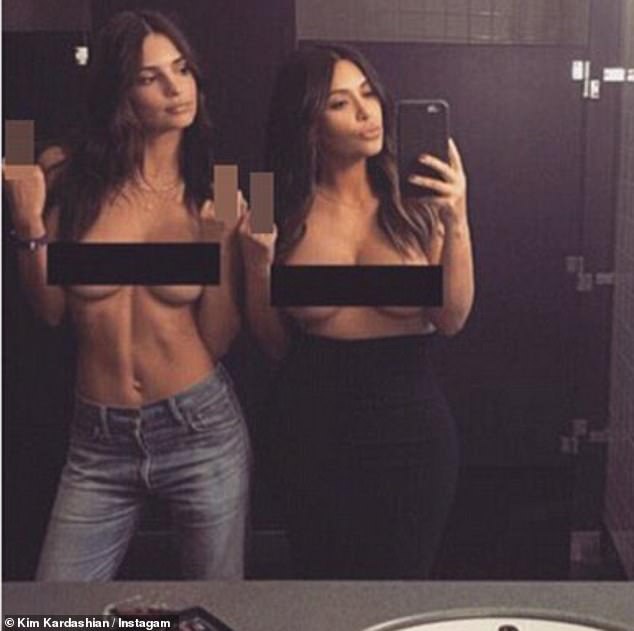 Girl power: Demi said of her creative influences: ‘I love Em Rata [Emily Ratajkowski], I love how she’s all about female empowerment and also Kim Kardashian’ (pictured together in 2016)

She said of her creative influences: ‘I love Em Rata [Emily Ratajkowski], I love how she’s all about female empowerment and also Kim Kardashian. She’s incredible and I love her brand and everything she’s accomplished.’

When asked about her future plans, Demi confirmed she would like to go into skincare or explore acting, and plans to have her own family in the future.

After splitting from DJ Chris Martinez last year, the lingerie model confirmed she is she is still still single, but is hopeful she will settle down in the future.

She concluded: ‘I would love to get married and have kids… but I just trust in the universe, at the moment I’m thankful for my single journey.

‘I don’t know how my body would be after one kid, but I expect it will change. I would love to have one, two, three or four! It just depends on my partner and my body so let’s see.’ 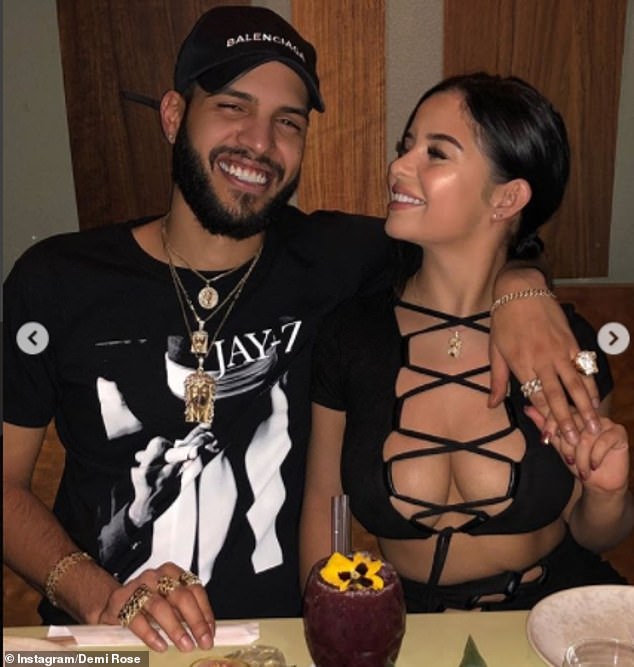 Moving on: After splitting from DJ Chris Martinez last year, the lingerie model confirmed she is she is still still single but hopes to start her own family in the future