Jacqueline Jossa has revealed she has more pictures of Caitlyn Jenner up on the wall of her study than husband Dan Osborne.

The I’m A Celeb star has put up two pictures of her ‘best friend’ Caitlyn Jenner, 70, in her study after they bonded in the jungle, compared to just one of husband Dan.

The actress, 27, gave her 2.5million Instagram followers a glimpse inside the recently decorated room as she showed off her new gallery wall.

Favourite snaps: Jacqueline Jossa, 27, has revealed that she’s put up more pictures of her pal Caitlyn Jenner, 70, in her study than her husband Dan Osborne, 28

Talking throughout the video, Jacqueline said she’s put up the snaps in her office with Caitlyn making the gallery wall twice as they’re ‘best friends’.

As she explained the other snaps the mother-of-two pointed to pictures with each of her daughters, Ella and Mia, as well as one with her parents.

Another image showed Jacqueline with some of I’m A Celeb’s producers and her co-star Andy Whyment.

Jacqueline finished talking through her pictures with a final snap with the American star, saying ‘and me and Caitlyn again, of course’. 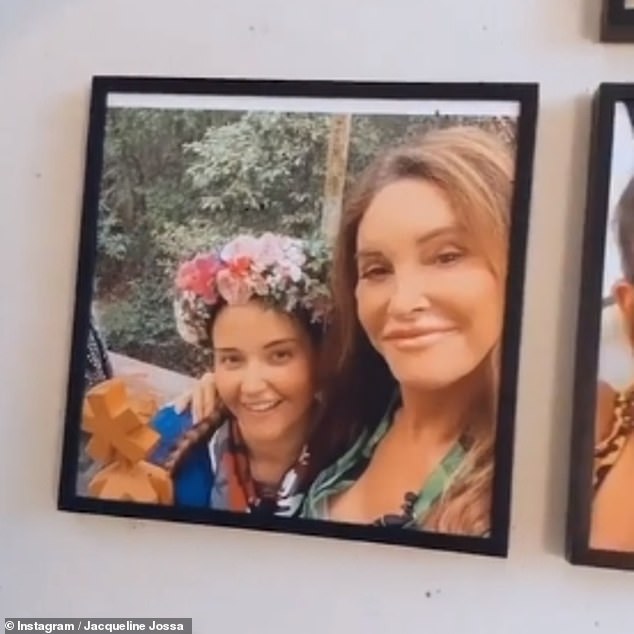 ‘Best friends’: The I’m A Celeb winner and Caitlyn became close after spending lots of time together in the jungle

She added: ‘Also I’ve got three more downstairs… from when I found out I won and stuff like that.’

Jacqueline and Caitlyn became close in the jungle with the winner even receiving a congratulatory video message from Kylie Jenner after she was crowned queen.

Speaking on Lorraine, Jacqueline said: ‘I got a video message. She was like, “Oh my god, Jacqueline”.

‘She said my name. And then she was like, “You’ve done so well. We’re so proud of you’. I screamed.’ 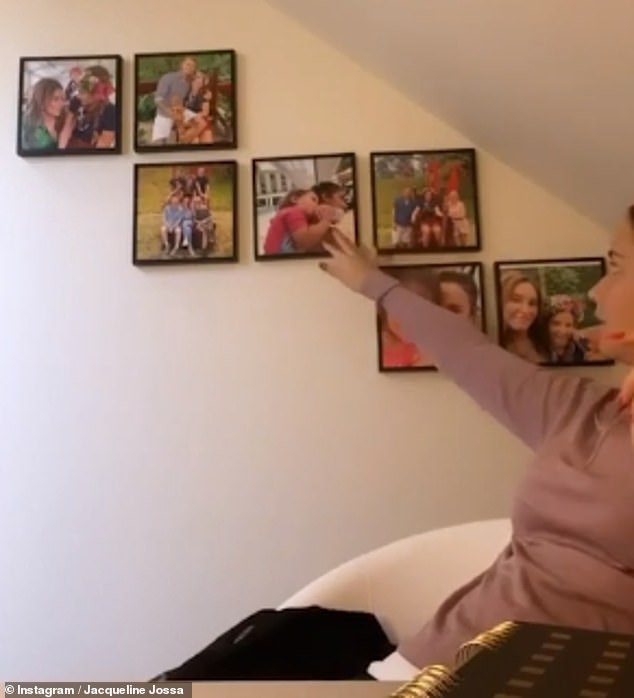 Family: Jacqueline talked her fans through the wall as she pointed to snaps. (l-r) is the star with Caitlyn, Dan, the I’m A Celeb producers and Andy Whyment, her family and another with Caitlyn 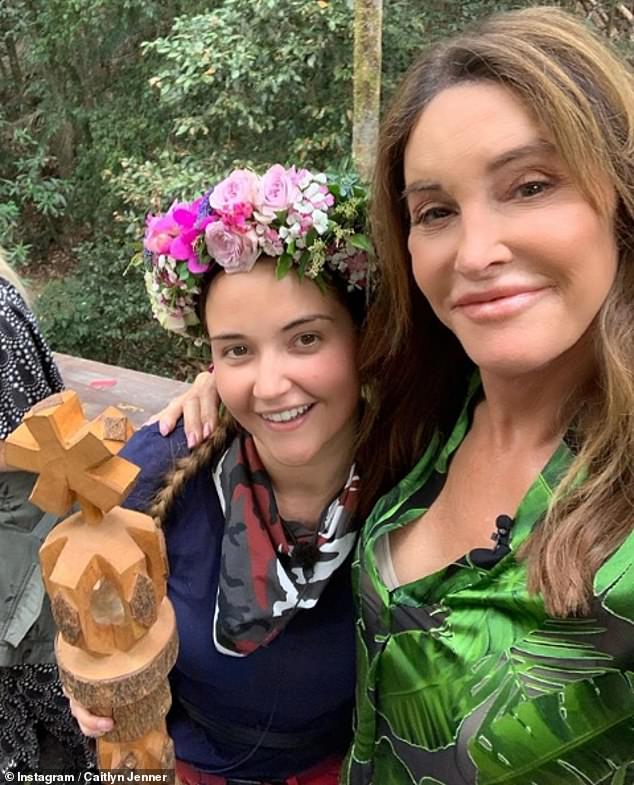 Pals: Caitlyn and Jacqueline became close during the show and the American star’s daughter Kylie even sent the British actress a video message after her win

While in the jungle Jacqueline’s marriage was hit by scandal after Dan was accused of cheating last year, something he vehemently denies.

A source told The Sun: ‘Dan called Natalie and started sending her nasty messages saying she had ruined his day by speaking about the romp. 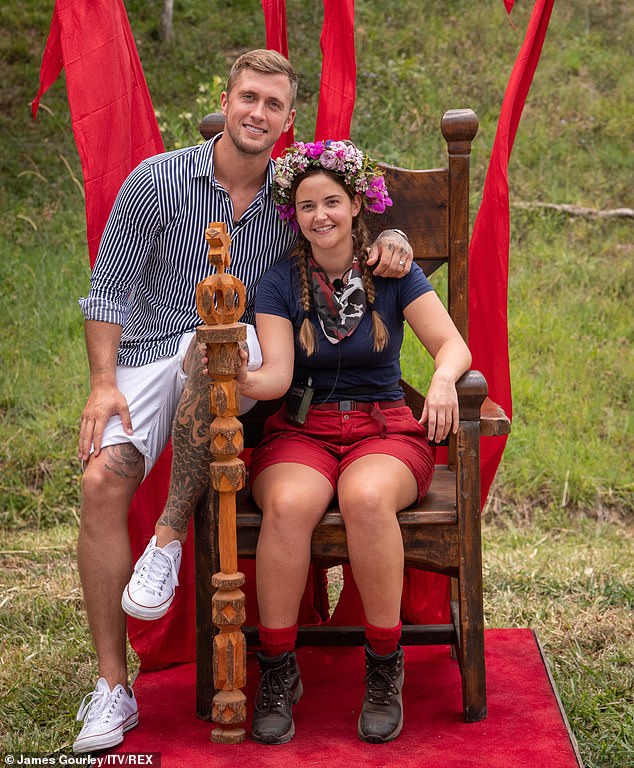 Together: While in the jungle Jacqueline’s marriage to Dan was hit by scandal after he was accused of cheating, something which he denies

‘Dan had told Jacqueline he’d done nothing wrong, so to see this totally blindsided everyone around her.’

According to Natalie, she and Chloe made their way back to her hotel suite following an alcohol-fuelled dinner to celebrate the conclusion of Celebrity Big Brother, won that year by soap star Ryan Thomas.

The Californian beauty claims that she and Chloe were joined in the hotel suite by two men, one of whom was Dan, who allegedly had sex with Natalie and performed a sex act on Chloe. 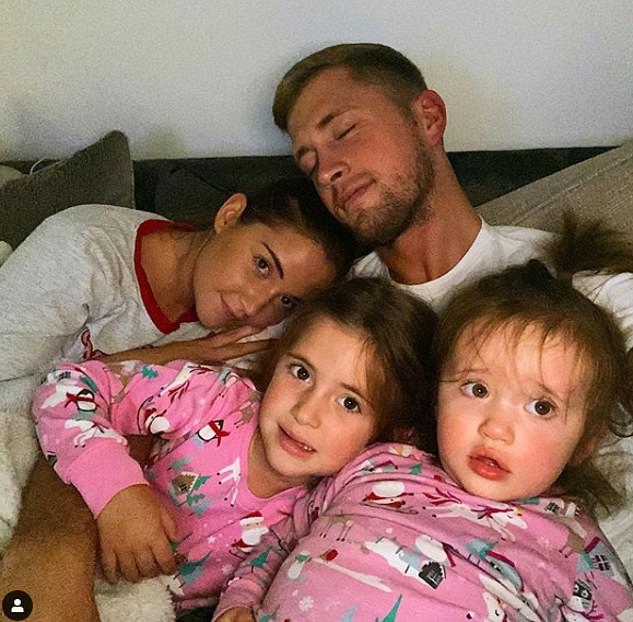 All together: Jacqueline married Dan in 2017 and the couple welcomed their four-year-old daughter Ella in 2015, and their 18-month-old daughter Mia in 2018