Jameela Jamil has accused Kim Kardashian of being ‘deluded’ by her ‘obsession’ with body image, after she shared a snap of her corset from the 2019 Met Gala.

Taking to Instagram to share a lengthy post, the Good Place star, 34, claimed the reality star had been morphed into feeling the need to share such a post after years in the spotlight, and urged fans to block or remove the accounts from their feed.

On Tuesday Kim shared a snap of the corset she wore to the Met Gala to celebrate its ‘camp’ theme, saying at the time that she even had to learn how to breathe in the restrictive piece as it drastically cinched in her waistline. 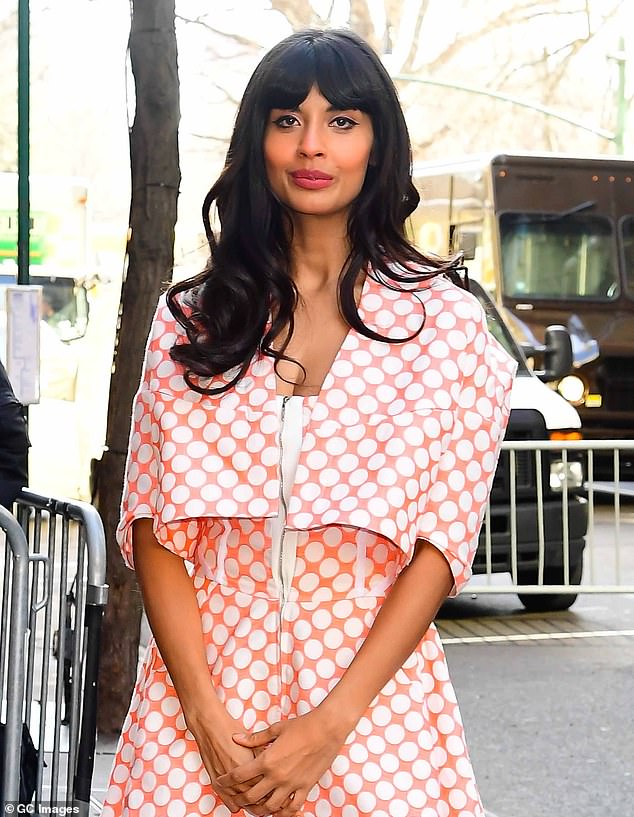 Controversial: Jameela Jamil has accused Kim Kardashian of being ‘deluded’ by her ‘obsession’ with body image, after she shared a throwback snap of her corset from the 2019 Met Gala

In her original post, Kim proudly showcased her tiny waist in the Theirry Mugler corset, after having a replica shipped in from London so she could style it into an array of new looks.

She penned: ‘Just found this in my phone from my special trip to London last year to meet w Mr. Pearl.

‘I wore a corset like this for the Met Ball for my @manfredthierrymugler Camp look but the corset was misplaced that night and I want it so badly preserved for my archive that I flew to London to have another made.

‘We also might have started making a few more costumes including my special 40th bday staging. Can’t wait to show you the video LOOKSSSS we’ve been cooking up.’ 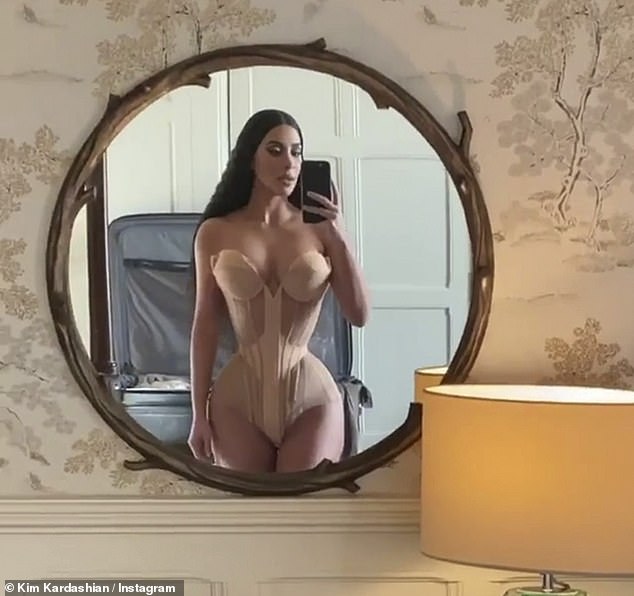 Painful: On Tuesday Kim shared a snap of the corset she wore to the Met Gala to celebrate its ‘camp’ theme, after having a replica made

On Wednesday, Jameela shared a lengthy post about Kim’s corset snap after being inundated with messages from her followers.

The famously outspoken star and activist said that she had intention of ‘cancelling’ Kim with the post, but instead wanted to educate her followers on how they’re being fed ‘a b******t expectation of women, developed by the patriarchy.’

In a lengthy caption she penned: ‘I’ve received over 1000 DMs asking me to address this. The reason I didn’t jump on it immediately isn’t because I don’t think the post was damaging and disappointing. I do.

‘It’s because the fact that you’re all messaging me about it, shows my work is done. I haven’t been trying to cancel Kim K. I was always trying to arm YOU with the knowledge to recognise for YOURSELVES that this is a b******t expectation of women, developed by the patriarchy.

‘If YOU know that it’s problematic, reductive and irresponsible for her to perpetuate such a heavily impossible beauty standard to her impressionable fans… then you’re empowered and conscious and don’t need me.’ 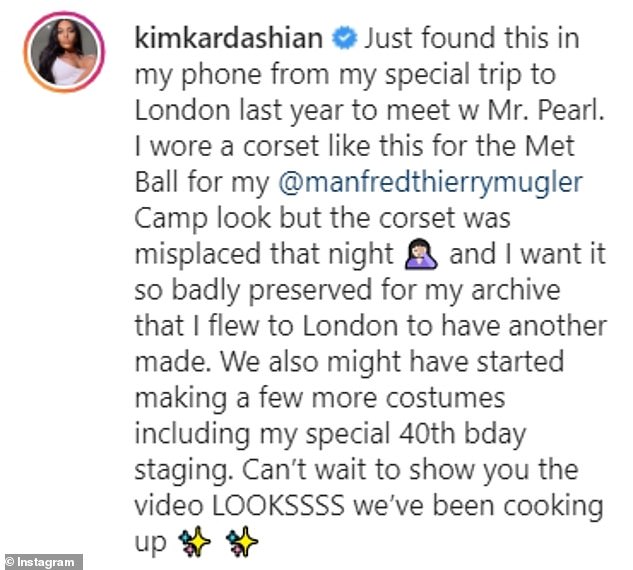 Ouch! In the caption Kim told her followers she couldn’t wait to style the restrictive corset into an array of different looks

Jameela went onto brand Kim ‘deluded’ into believe what was the ideal body image, and sharing that with her young followers.

She continued: ‘Kim, like many of us, has had decades of body image issues and obsession. This has been HEAVILY perpetuated by how much the media scrutinised her and her sisters over their appearances.

‘She isn’t actively trying to harm you. She’s just so harmed and deluded into thinking this is what SHE needs to look like to be special and beautiful and she’s spilling it out onto her following. Is this wrong? YES. 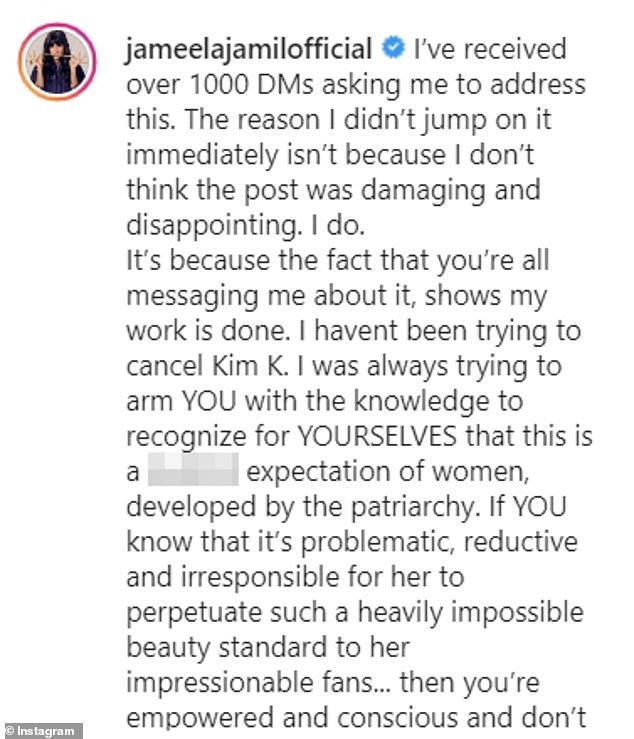 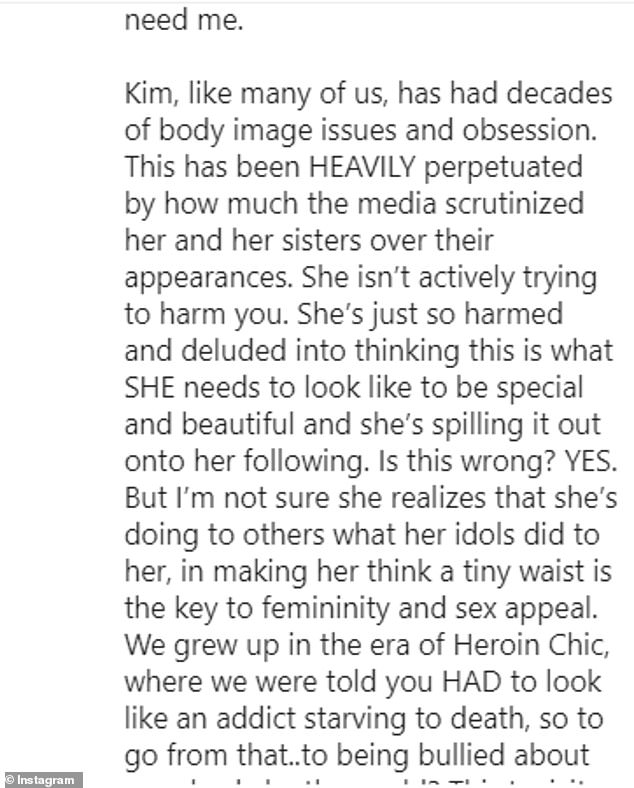 ‘But I’m not sure she realises that she’s doing to others what her idols did to her, in making her think a tiny waist is the key to femininity and sex appeal.

‘We grew up in the era of Heroin Chic, where we were told you HAD to look like an addict starving to death, so to go from that..to being bullied about your body by the world?

‘This toxicity from someone who is smart and knows better, is a sign that this is harm she can’t stop doing. So there’s no point in screaming at her. The smart thing to do is to protect YOURSELF.’ 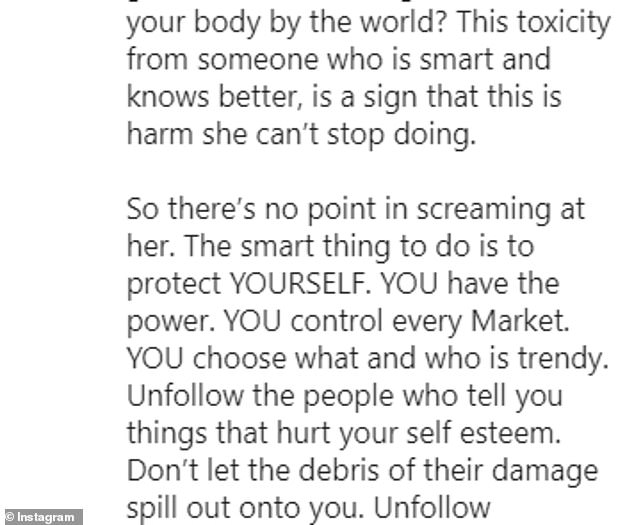 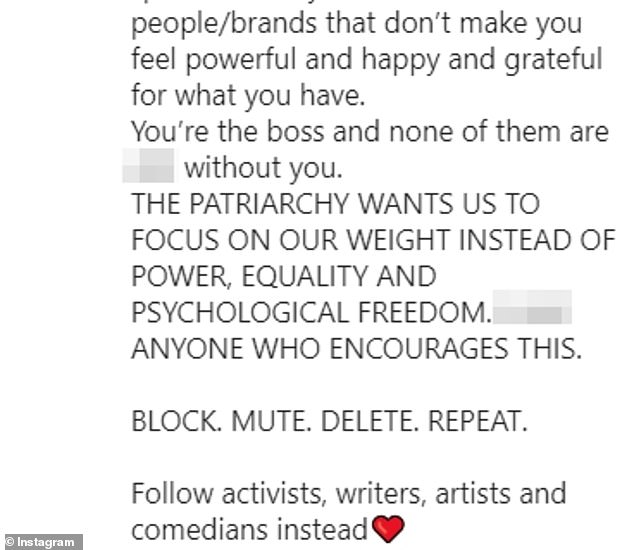 Raging: Re-posting Kim’s corset snap, Jameela penned a lengthy caption encouraging her followers not to believe such a ‘deluded’ perception of body image

Jameela then urged her followers to block or delete social media stars such as Kim, and take their inspiration from activists instead.

She penned: ‘YOU have the power. YOU control every Market. YOU choose what and who is trendy. Unfollow the people who tell you things that hurt your self esteem. Don’t let the debris of their damage spill out onto you.

‘Unfollow people/brands that don’t make you feel powerful and happy and grateful for what you have. You’re the boss and none of them are s**t without you.

‘THE PATRIARCHY WANTS US TO FOCUS ON OUR WEIGHT INSTEAD OF POWER, EQUALITY AND PSYCHOLOGICAL FREEDOM. F**K ANYONE WHO ENCOURAGES THIS. BLOCK. MUTE. DELETE. REPEAT. Follow activists, writers, artists and comedians instead.’ 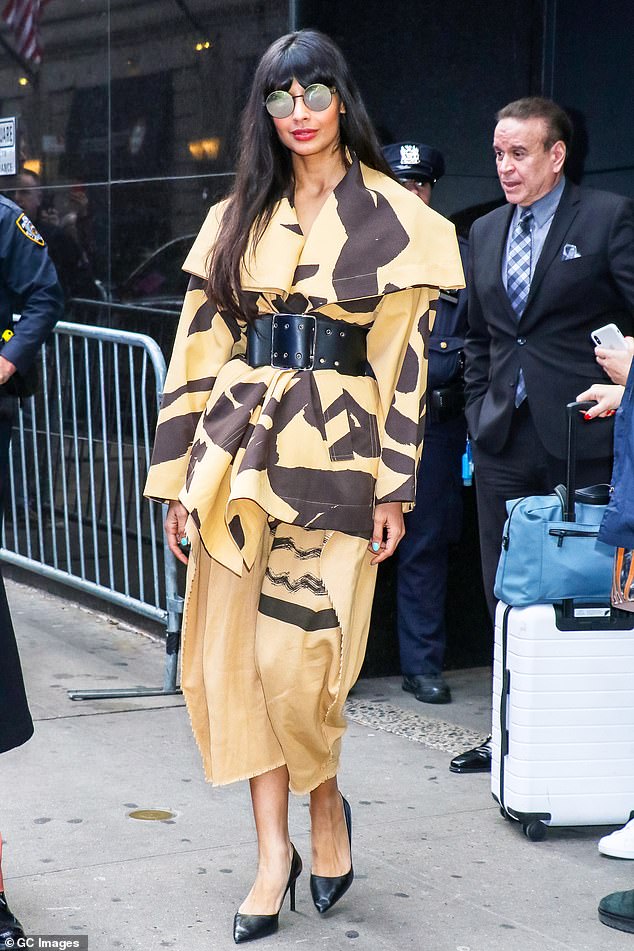 Opinionated: Jameela has never been why when it comes to sharing her views around body images with her followers

Jameela has never been why when it comes to sharing her views around body images with her followers, and has previously slammed stars for photo-shopping their Instagram posts.

She was recently forced to hit back at a racist troll who targeted her on Twitter.

The actress shared a screengrab of a vile comment in which the user called her a ‘p*** b***h’ and branded her an ‘attention seeking w***e.’

Sharing the post with her 2.9million Instagram followers on Thursday, Jameela responded with: ‘Grandpa… is that you?’

She also captioned the photo: ‘When they tell you misogyny doesn’t exist anymore.’

The star was inundated with support from her fans who praised her decision to call out the racist troll on social media.

One wrote: I don’t understand why people are this way…You handle things so well, just make sure you don’t let the opinions of useless, ignorant people get to you. You’re incredible. You know this.

Another wrote: ‘Misogyny, racism, and poor grammar all in one!’

Hitting back: The actress was recently forced to hit back at a vile troll who called her a ‘p*** b***h’ and branded her an ‘attention seeking w***e’ on Twitter