Jonathan Cheban has managed to parlay his Keeping Up With The Kardashians fame into something much bigger as he lands paycheck after paycheck for being FoodGod – he has already landed contracts with BurgerIM and Jersey Mike Subs.

And the New Jersey native was showing off some of that newfound wealth as he stepped out of a neon green Aston-Martin car worth $280,000 while in Beverly Hills on Thursday.

This comes after the best friend of Kim Kardashian was seen hitting some of the top shows during Paris Fashion Week. 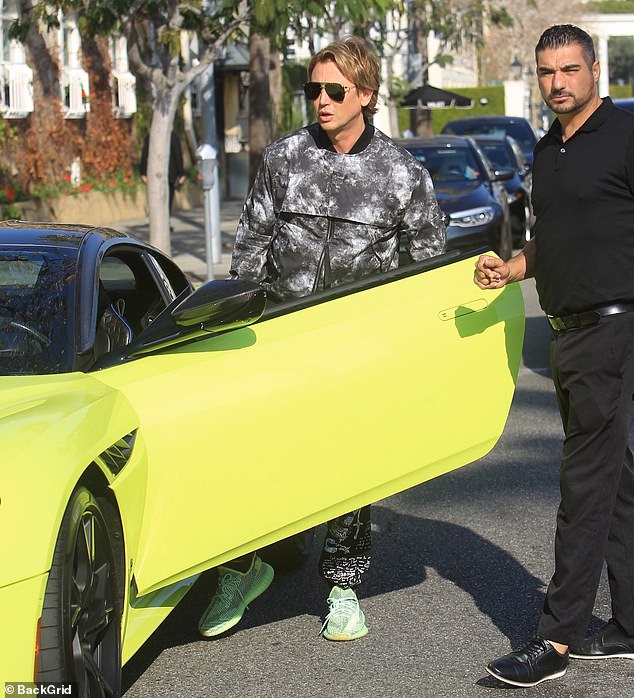 Making the big bucks! Jonathan Cheban was seen getting out of a $280,000 Aston-Martin when in Beverly Hills on Thursday 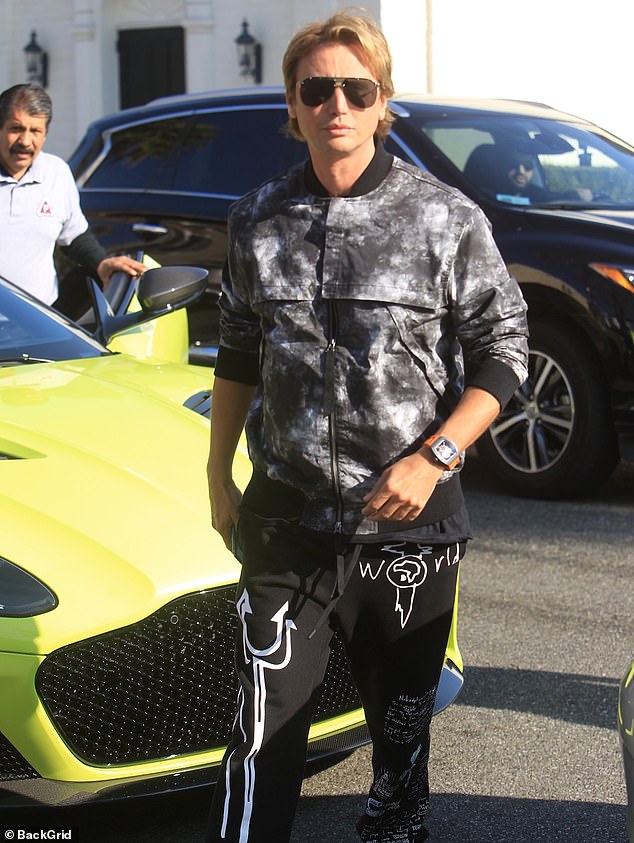 Mean it like a BOSS: The former publicist gave a very serious look after leaving the valet with his neon car 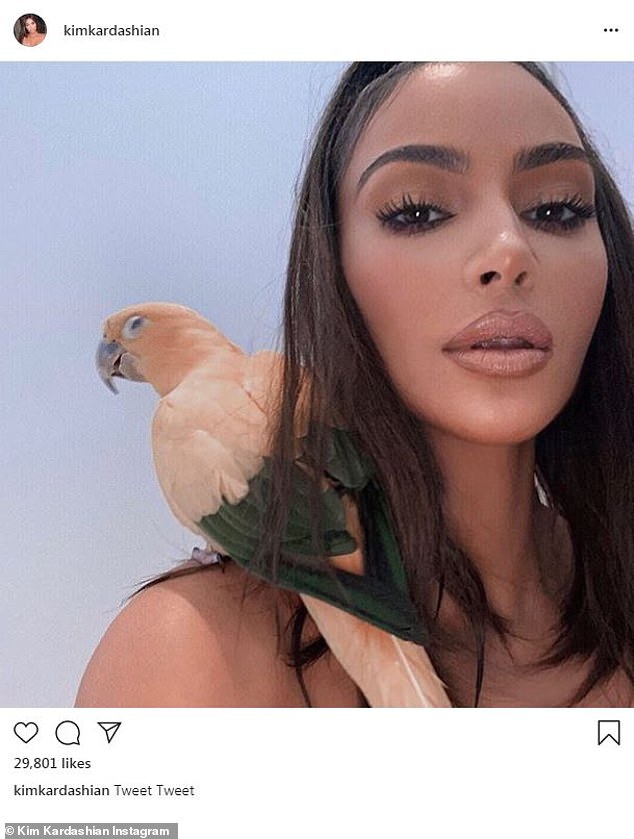 A fair weather friend? Kim Kardashian was not with him that day; instead she posted a photo to Instagram with a bird

The star, who got his start as a publicist then starred on The Spin Crowd, wore a fashion forward look.

Cheban had on a grey and white marble design zip up jacket with the sleeves pushed up.

He added black sweatpants with white designs including a pitch fork.

Jonathan did not forget the details as he added oversized black sunglasses and a watch that looked very pricey: it had a large face with a beige strap. 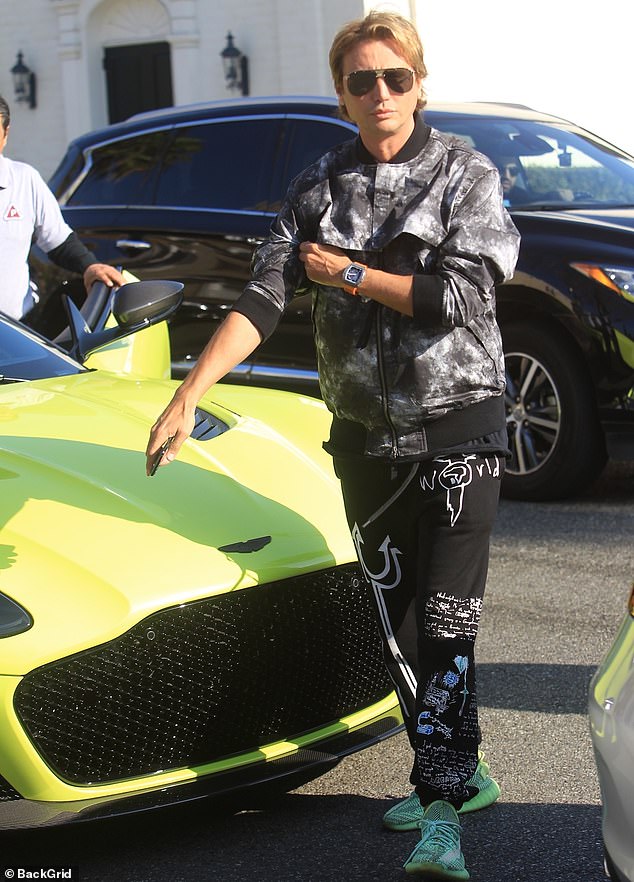 He likes to dress in the latest trends: The star wore a fashion forward look. Cheban had on a grey and white marble design zip up jacket with the sleeves pushed up

He is a 25-year-old Russian rapper and singer-songwriter.

Egor has collaborated with Russian artists such as Timati Al.J, Mot and Philipp Kirkorov. 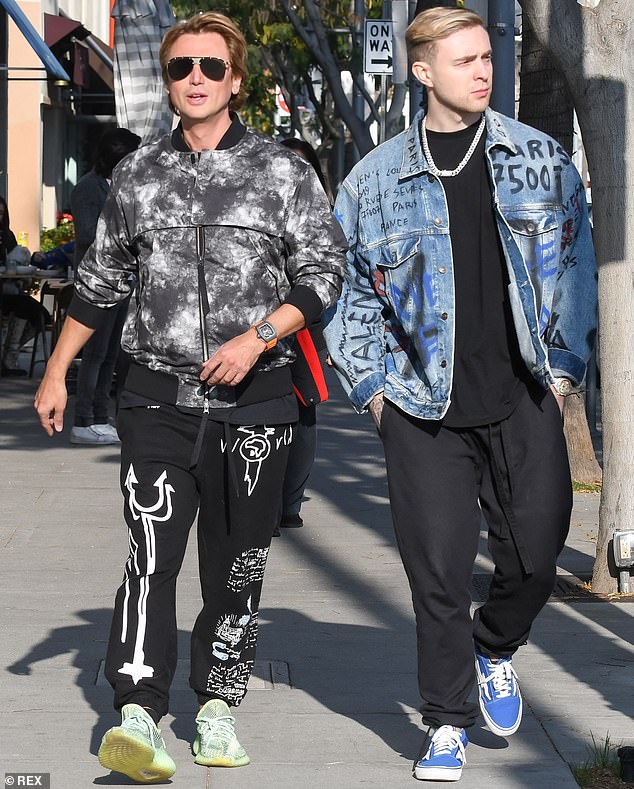 Hanging out with a Russian! Jonathan was also seen with Egor Nikolaevich Bulatkin, better known by his stage name Egor Kreed and KReeD. He is a 25-year-old Russian rapper and singer-songwriter 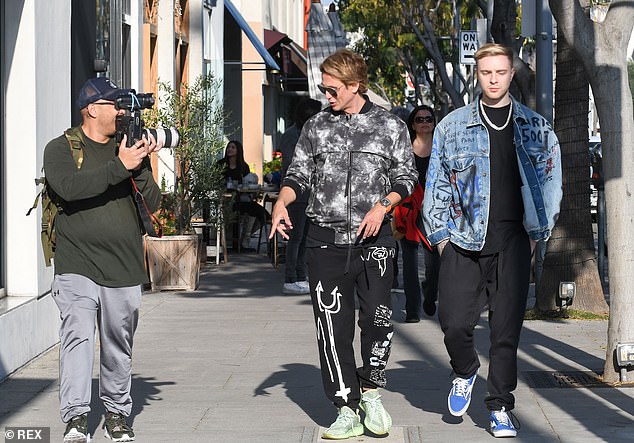 Talk to a photographer: Cheban seemed to admire a shutterbug’s sneakers 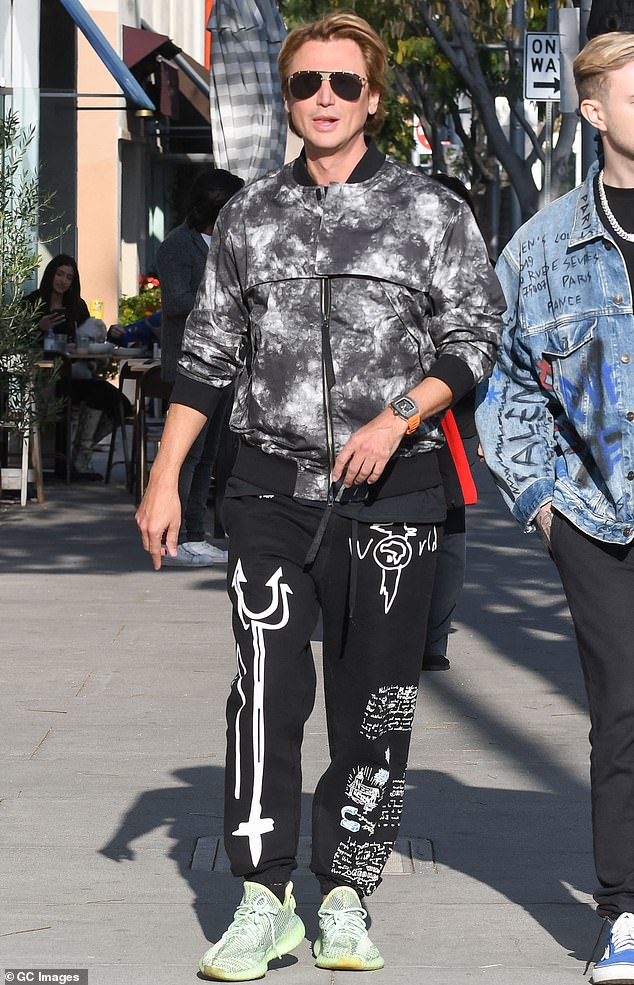 On the money: Jonathan did not forget the details as he added oversized black sunglasses and a watch that looked very pricey: it had a large face with a beige strap. Green Yeezy sneakers were likely a gift from Kim’s husband Kanye West

And later that night Jonathan was out, hitting the Spotify event for Best New Artist Party at The Lot Studios. He wore a blue hoodie with an evil eye on front.

Cheban has flown to Beverly Hills from Paris, where he took in several shows.

The TV star wore a baby blue suit with a speedboat on front.

Also last week he was seen at the Louis Vuitton, Off-White, Y Project and Amiri Menswear shows proving he definitely has a passion for fashion. 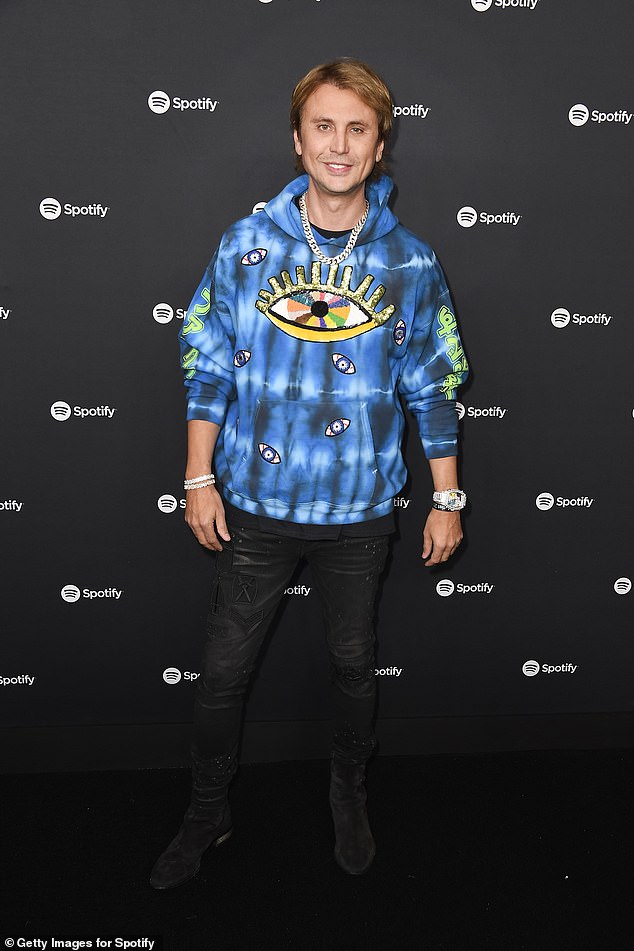 Another day, another party: He also stopped by the Spotify party in LA; it was the Best New Artist Party at The Lot Studios on in Los Angeles 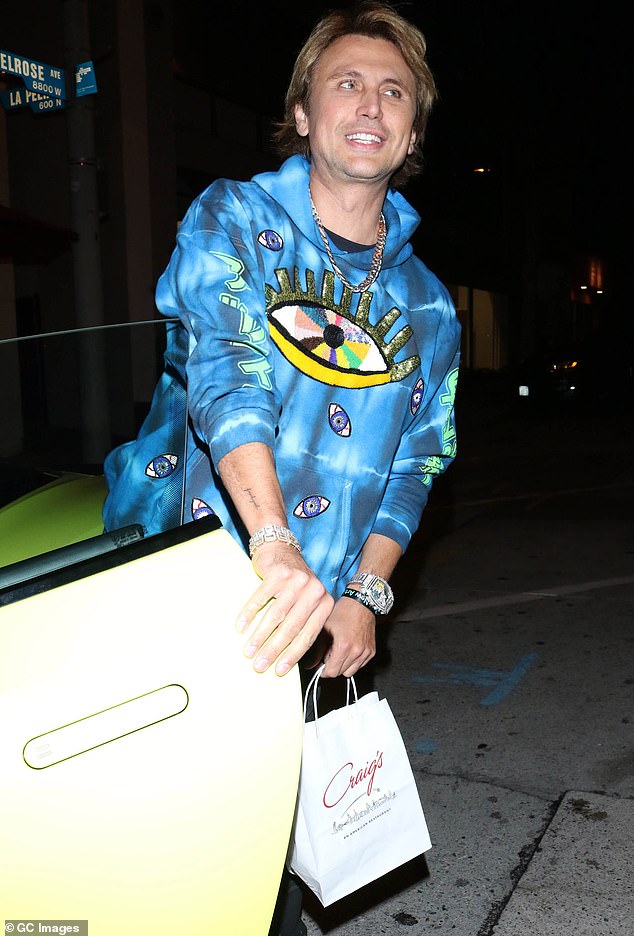 And now for some fancy food: Cheban also took his Aston-Martin to Craig’s for a bite to eat

When Cheban went to the Amiri Menswear Fall/Winter 2020-2021 show on Thursday, he went with a more toned down look.

The Spin Crowd star had on a black pin stripe jacket over a white T-shirt and his diamond FoodGod necklace.

The pal of Khloe, Kourtney and Kendall also had on round sunglasses that looked like they were from the 1990s.

When hitting the Louis Vuitton show, he opted for all black.

Cheban had on his blazer with a black top and leather slacks with black boots. 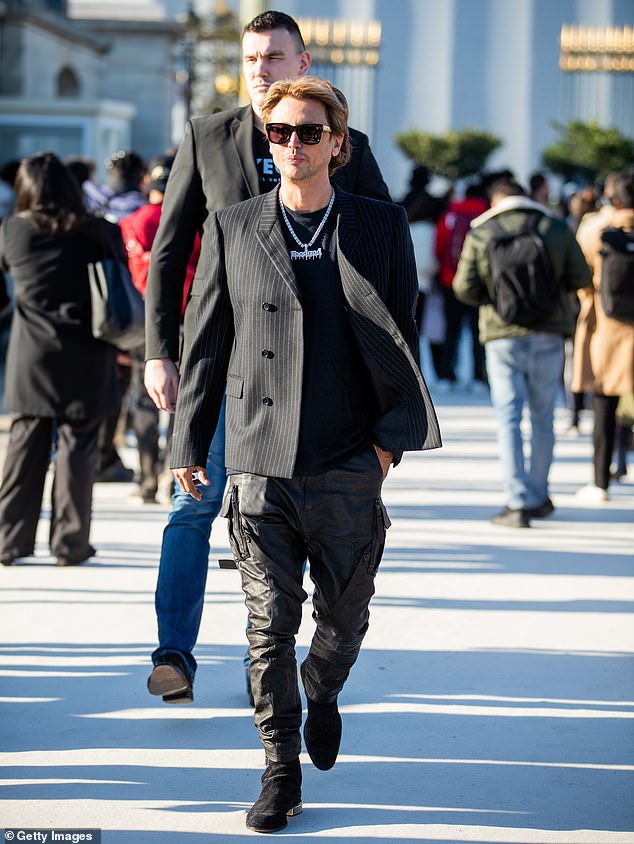 The man and his muscle: Jonathan had a bodyguard behind him that looked to be 6ft5in when he went to the Louis Vuitton show

The longtime friend of Kim and regular on Keeping Up With The Kardashians has hired extra security in Paris.

He wants to prevent a robbery like the one Kim went through in 2016, according to PageSix.

The 45-year-old New Jersey native – who has also appeared on Celebrity Big Brother – often wears diamond encrusted necklaces and watches worth a fortune.

‘It’s important for his peace of mind and well-being,’ a source said of Foodgod.

Kim was bound and left in a bathroom when robbers entered her Paris hotel in 2016 and took $10 million worth of jewelry, including a large diamond ring from Kanye. 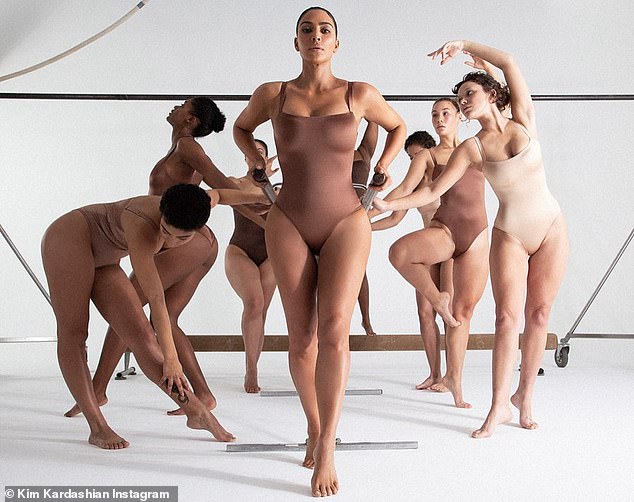 She works hard for the money: Here his bestie Kim is seen modeling SKIMS

She has since worn very little jewelry and only pulls out her engagement ring for special occasions.

On Wednesday he was seen at the Off-White show on Wednesday with bodyguards.

He had on a thick diamond-encrusted chain necklace with matching bracelet when modeling a red jacket, black slacks and colorful sneakers.

He will also have muscle on hand when he goes to the shows for Louis Vuitton, Rick Owens and Balmain.

According to the site, he has plenty of bling.