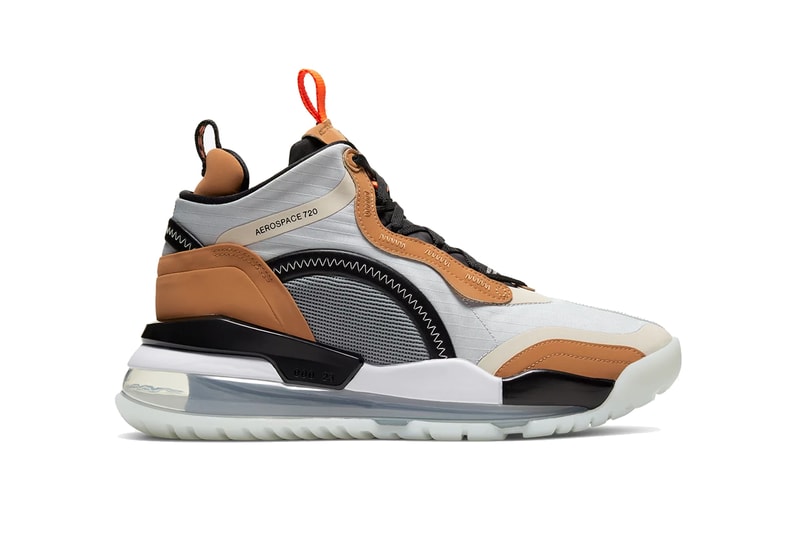 Although Jordan Brand‘s Air Jordan silhouettes boast undying popularity, the company continues to experiment in the lifestyle sphere, the latest result of which is a design dubbed the Aerospace 720. Set to lift off in a “Particle Grey” colorway, this new silhouette offers a palette mildly reminiscent of the popular Air Jordan 1 “Rookie of the Year” and an Air Max cushioning unit in the vein of the Proto Max 720. However, it sets itself aside from its contemporaries by way of a unique cut and appealing accents.

Constructed of a ripstop fabric, the Aerospace 720 equips a soft grey shade and wavy stitched toebox seam on its base layer. There’s also a half circle of sporty grey mesh on the midfoot, separated from its counterpart by thick black leather trim. This trim continues around the heel, and the rest of the accents are provided by fused light tan accents and rich wheat synthetics on the heel, toebox and eyestays.

Branding is kept to a minimum, only appearing by way of an “Aerospace 720” text hit towards the collar and classic black Jumpman logos on the tongue. Technical text on the black throat and orange insoles complete the graphic embellishments, with blaze orange heel/tongue tabs providing pops of flair. Down below, the white/black midsole teams with a milky white outsole to encase a clear full-foot Air Max unit.

The Jordan Aerospace 720 “Particle Grey” will release at retailers like Sneakersnstuff on January 1 for $200 USD.

If you’re looking for a comprehensive footwear recap before we say goodbye to the decade, check out our list of the most influential sneakers from the past 10 years.