Rapper Lil Mosey Jumped In Finland: Euro-Goons Ran Down On him!! (Vid)

It’s nearly the one year anniversary of the scandal that threw her into the spotlight.

And now Jordyn Woods is putting all the drama behind her, after locking lips with Tristan Thompson in February 2019, who was dating Khloe Kardashian at the time while she was Kylie Jenner‘s best friend.

The 22-year-old beauty has cut ties with the famous family and ‘is just letting it be what it is.’

Onwards and upwards: Jordyn Woods is reportedly finished with speaking about the Kardashian/Jenner cheating scandal that threw her into the spotlight nearly one year ago

‘Jordyn’s position now is she’s going to just let it be what it is,’ an insider told People on Monday.

‘She said what she had to say. She’s working. She had a stint on a TV show and she has a couple brand deals coming up. She’s not doing too, too much, but is staying busy.’

After the scandal came out into the public, the model was quick to appear on Jada Pinkett-Smith’s red table talk to speak about what had gone down from her side. 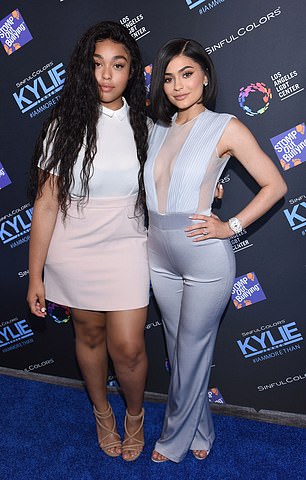 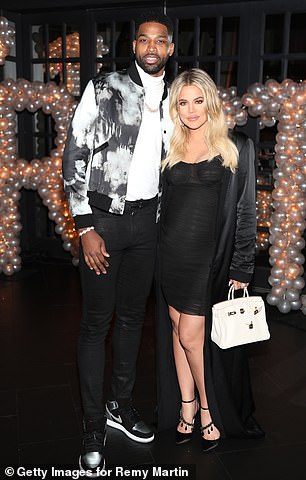 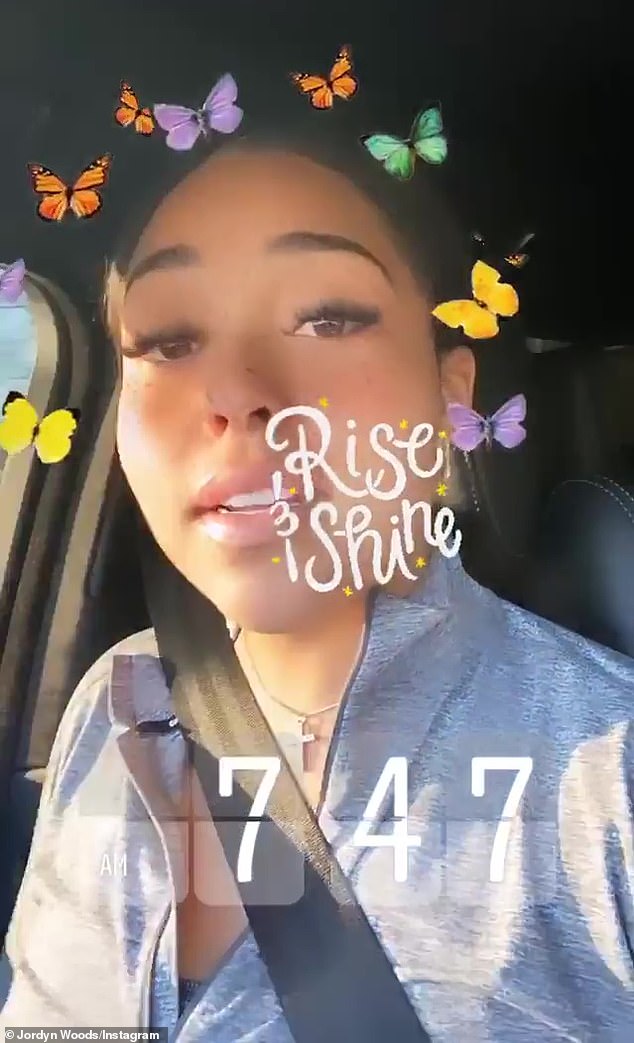 Nod to Kylie? Driving to the gym, the model used a ‘Rise & Shine’ filter – the words that the youngest Jenner sister made famous late last year

Tristan has never publicly addressed his side of the cheating scandal.

He remains in an amicable place with his ex baby mama, Khloe Kardashian, with reports revealing he hopes for another chance.

‘Tristan is very charming and sweet to Khloé,’ another insider shades on Monday.

‘She always wanted to keep her family together because of True. Splitting from Tristan in the past was extremely difficult for her. She is flattered that he is trying to win her back, but not flattered enough to be in a romantic relationship with him.’

They continued: ‘Who knows what will happen in the future though. Right now she is focused on just getting along with him so they can have the best family time together with True.’ 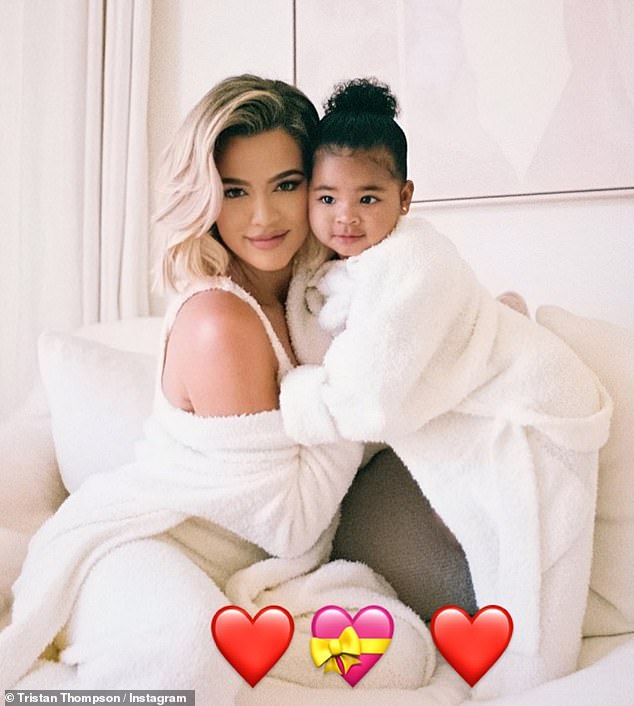 Mother: Khloe is currently single and spending her time and energy focusing on her daughter True Thompson, one 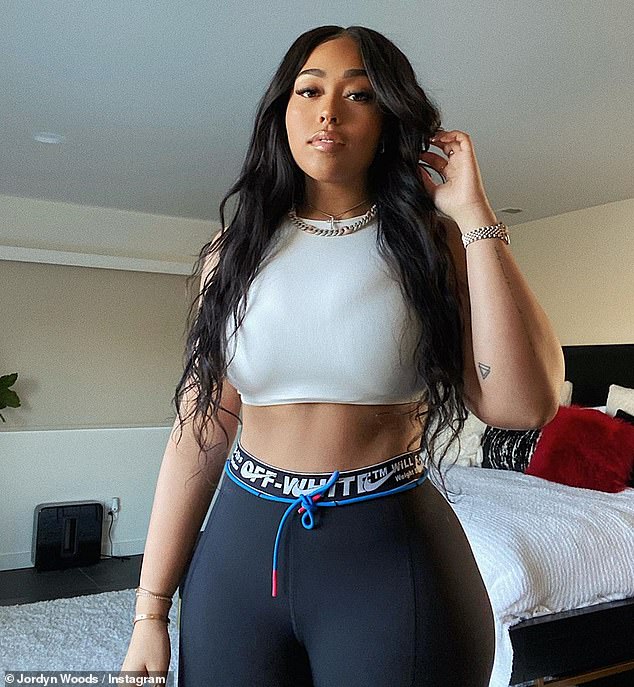 Stunner: Jordyn sent much on Sunday sending temperatures rising with an array of racy snaps

And while Jordyn has officially cut ties with the Kardashian clan including former BFF Kylie Jenner, she gave her a nod on Monday morning.

The Masked Singer: Paul Anka is revealed as the Broccoli

Driving to the gym, the model used a ‘Rise & Shine’ filter – the words that the youngest Jenner sister made famous late last year.

Jordyn sent much on Sunday sending temperatures rising with an array of racy snaps.

She spotted a white crop top that drew attention to her incredibly toned mid-section.

The beauty completed the look with a pair of Off-White X Nike activewear tights. 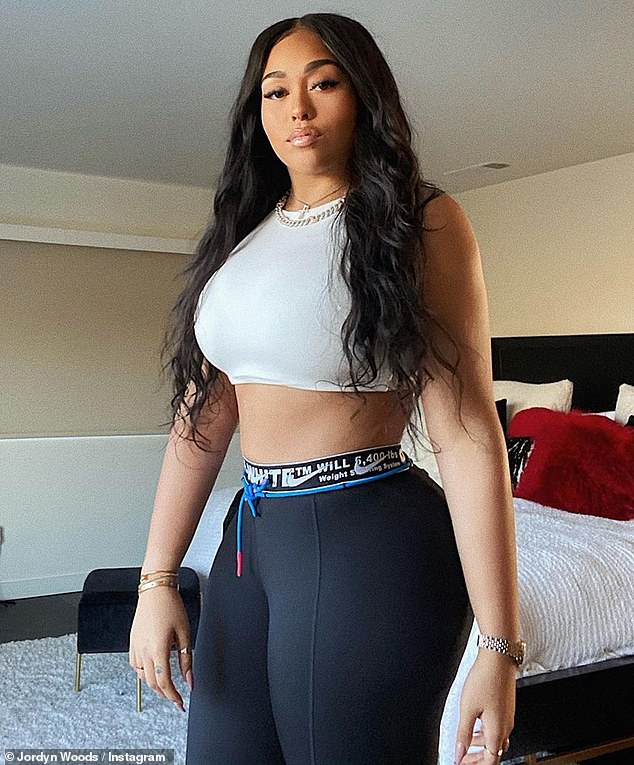 She’s been working out: She spotted a white crop top that drew attention to her incredibly toned mid-section