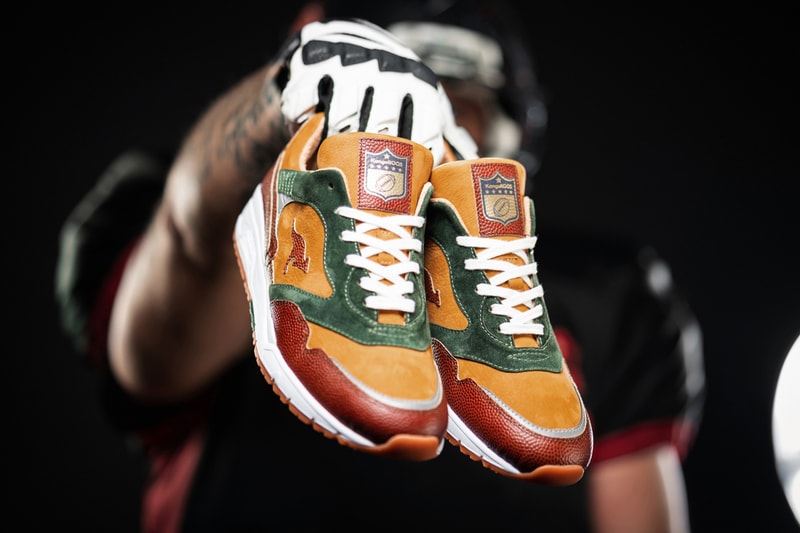 Walter “Sweetness” Payton is one of the finest running backs the NFL has ever seen, so ahead of Super Bowl 54 KangaROOS is paying homage to its former pitchman with a new ROOS Ultimate “Memory of 34.” Proffering a luxurious Horween leather construction — the same leather used on the NFL’s footballs — and plenty of special details, the shoe is a loving homage to the game and one of its greats. Crafted by hand in Germany, each pair uses a supple mix of soft yellow-gold leather and green suede. This premium base is overlaid by pebbled brown football leather on the mudguard and heels. Further football-inspired details are present on the quarter panel’s leaping kangaroo graphic and the tongue patch, which is stamped with a gold and black football logo.

Payton’s #34 is split across the left and right heel collars, and slight touches of hi-vis reflective trim appear around the ankle collar and toebox. Down below, a white EVA foam midsole and a forest green/gum outsole complete the look. The shoes are also accompanied by a three-pack of pins: one that nods to Payton’s “Sweetness” nomme de guerre, one that acknowledges his #34 jersey and one that matches the tongue’s stamp.

Iinspiration runs deeper than just the construction of the NFL’s “The Duke” game ball itself. Horween leather is manufactured in Chicago, the same city that Payton starred in for the Chicago Bears. Furthermore, Horween founder Arnold Horween was even an NFL player and coach himself, spending time in both roles with the Chicago Cardinals during the early 1920s — well before the team headed to St. Louis in 1960 and became the Arizona Cardinals in 1988.

The KangaROOS Ultimate “Memory of 34” will release at retailers like 43einhalb on February 1, the day before Super Bowl LIV, for €290 EUR (approximately $320 USD).

Be sure to tune into the 54th Super Bowl the day after to see Patrick Mahomes‘s Kansas City Chiefs take on Jimmy Garoppolo’s San Fransisco 49ers, and for football footwear content of the European variety check out adidas‘s new Predator Mutator Demonskin boot.