Kayne West stepped out in his own ‘Vote Kanye’ hoodie as he led the stylish arrivals at Bottega Veneta’s fashion show on Friday night.

The 43-year-old rapper was joined by his eldest daughter North, seven, at the star-studded event in London, with the youngster also donning a sweatshirt from her dad’s presidential merchandise. 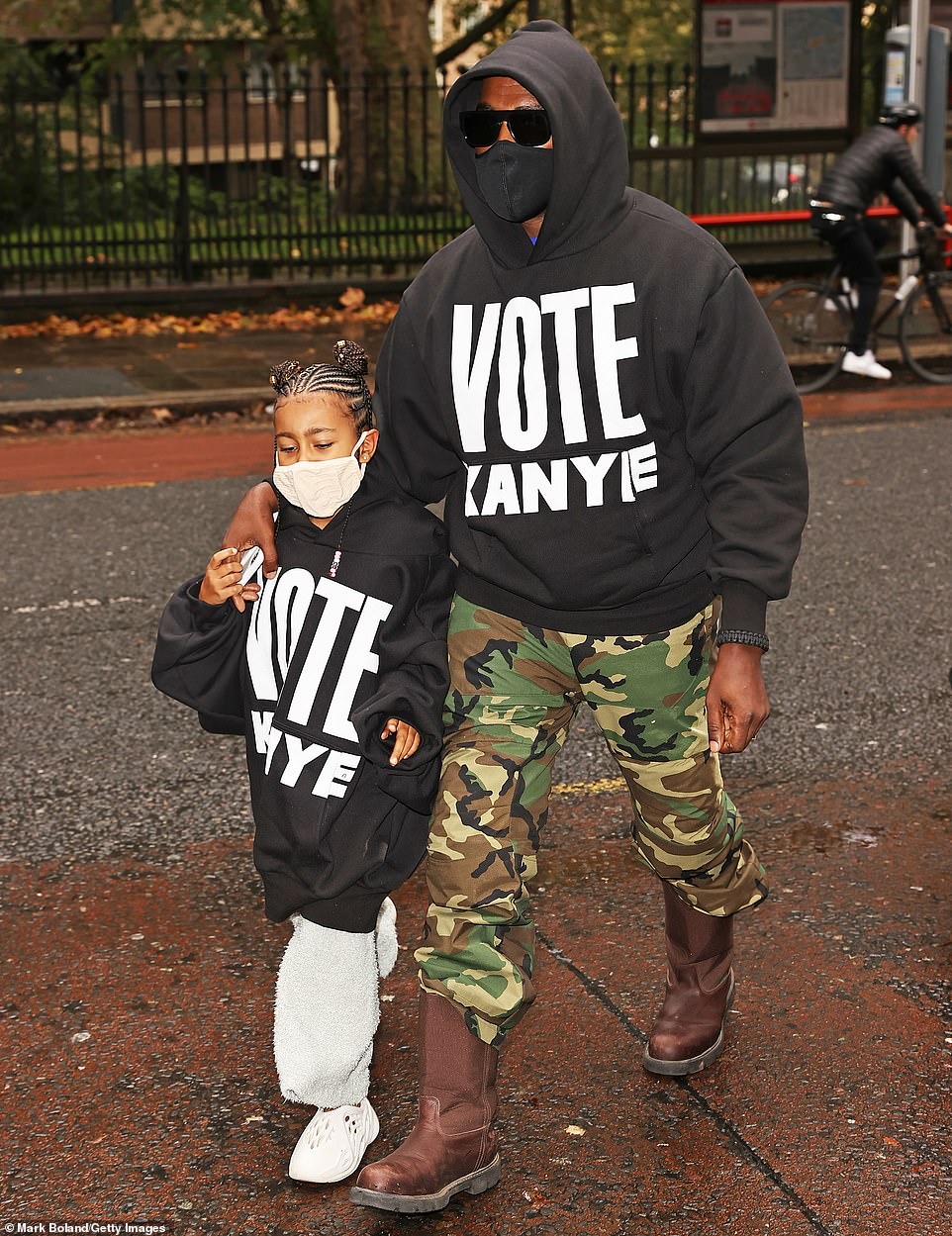 Statement: Kanye West and his daughter North donned matching merchandise as they arrived at Bottega Veneta’s fashion show in London on Friday

Kanye kept things casual in his black jumper and a pair of camouflage trousers, which the star tucked into a pair of brown leather boots.

His daughter North also ensured she was rocking a fashionable ensemble in some fluffy tracksuit bottoms and a pair of her dad’s own Yeezy croc shoes.

They both also ensured to stay safe and wore face masks as they arrived – with Kanye opting for a black one while North donned a cream coloured covering.

After enjoying the show, Kanye and North headed over to Selfridges to show their support for Kim Kardashian’s SKIMS collection which is launching at the department store. 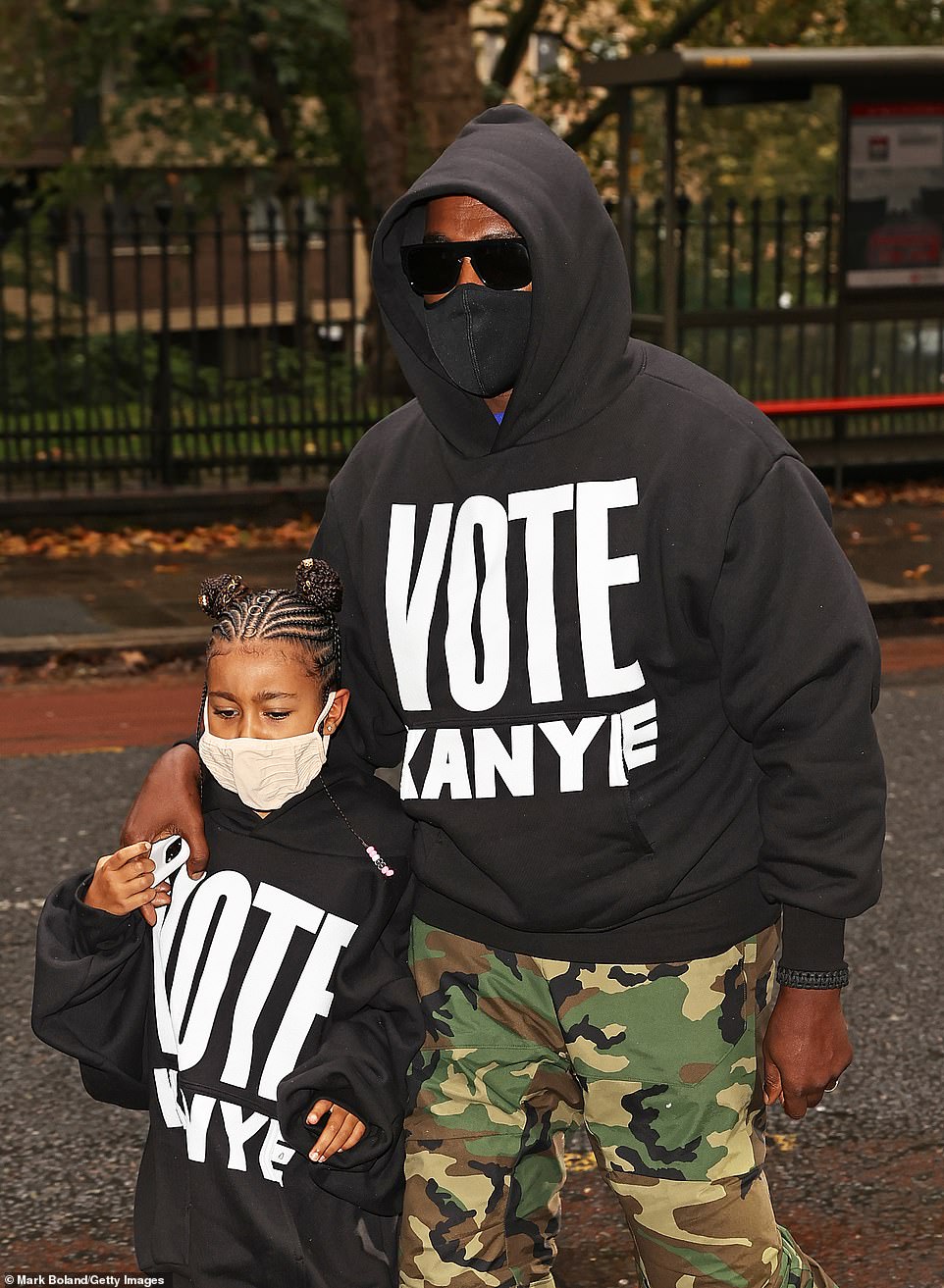 Matching: The father and daughter duo both donned the merchandise and face masks 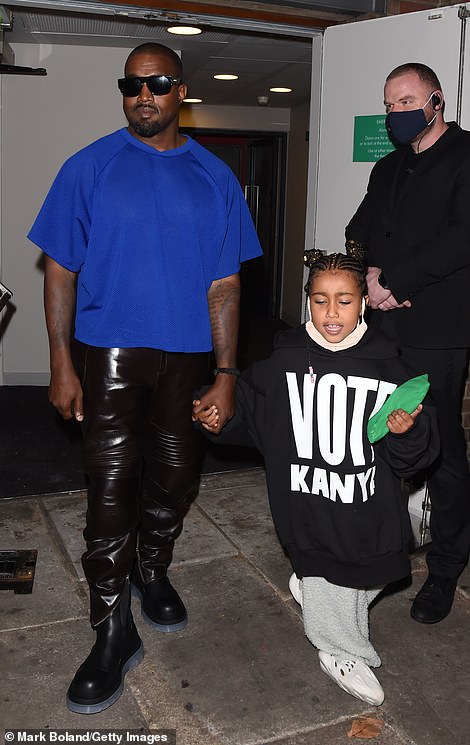 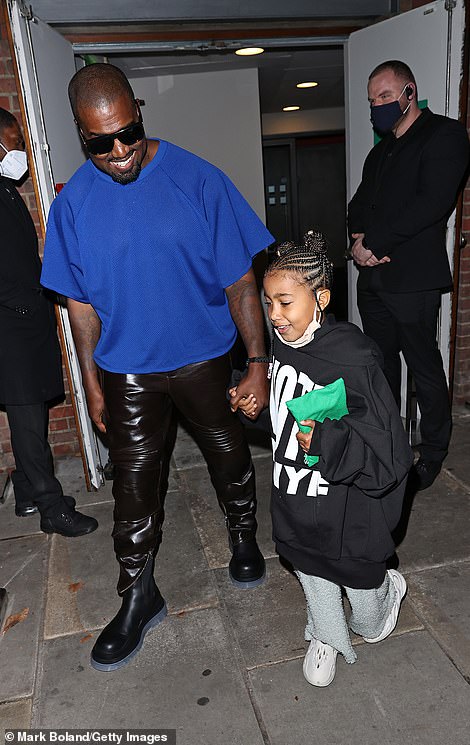 Outfit change: Kanye was also seen rocking some leather trousers and a vibrant blue t-shirt at the event

In a short clip shared to Kim’s Instagram, the father and daughter duo could be seen inspecting the mannequins and products already set up in the store.

And the pair weren’t the only family members enjoying a night out, as fellow rapper Skepta also stepped out with his daughter River, two, at the Bottega Veneta show.

Skepta caught the eye in a leather jacket with a contrasting red underlay which complemented his chunky red-soled boots.

His little girl matched his outfit by wearing her own warm red jumper and black skinny jeans as she made a very cute appearance at the show. 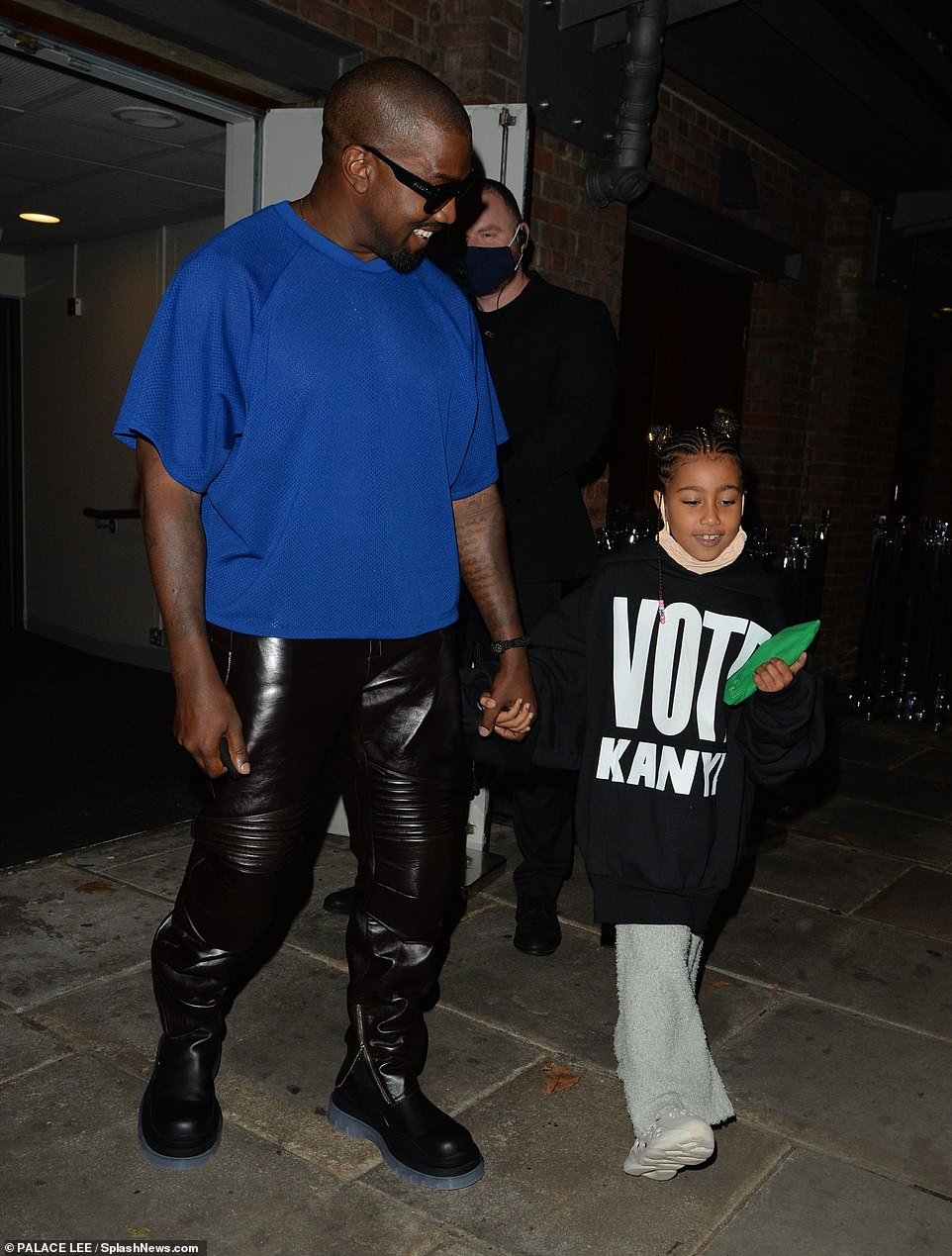 Having fun: Kanye beamed a smile at his little girl during their evening out together 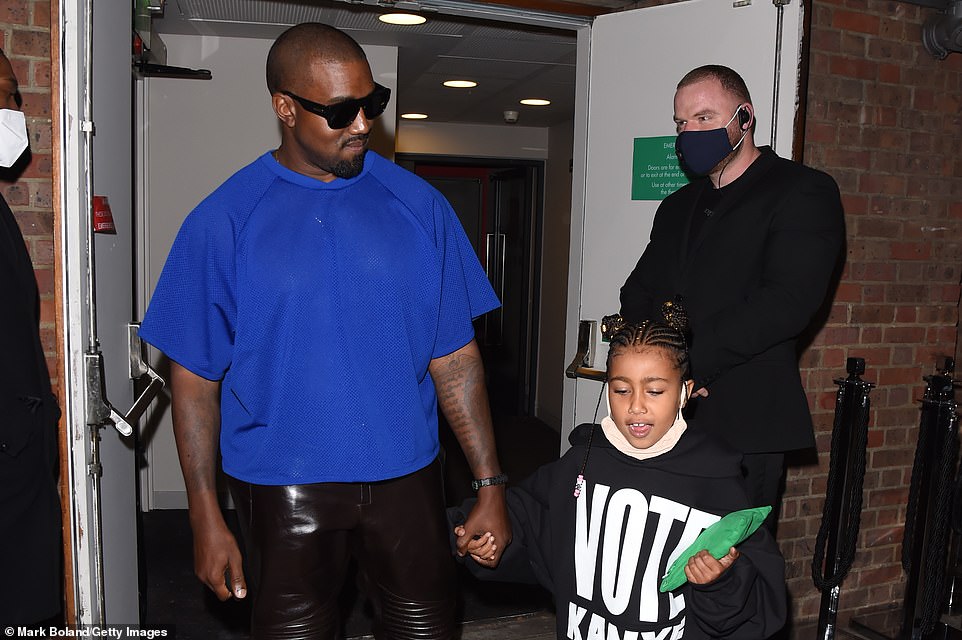 Style: The rapper and presidential hopeful donned some black sunglasses during the evening 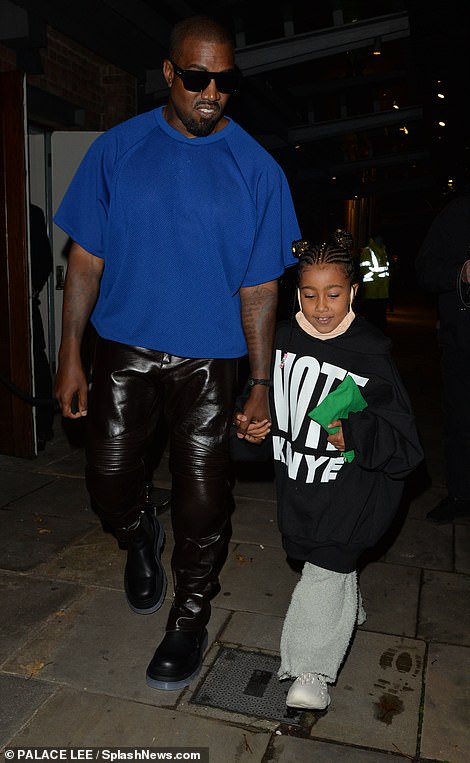 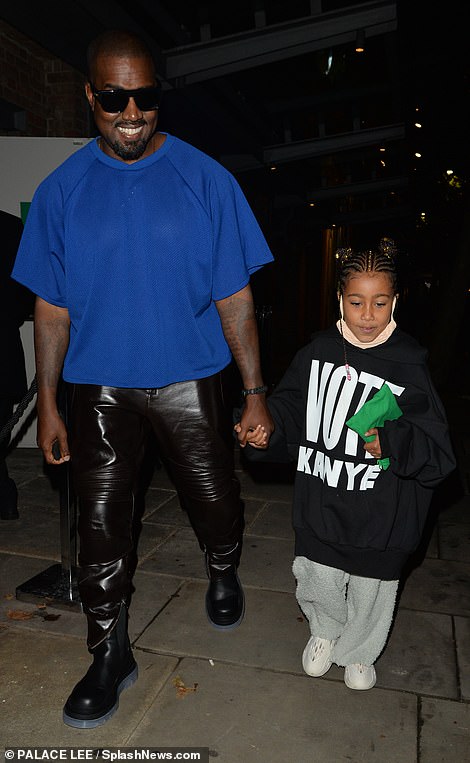 Sweet: The duo held hands and smiled as they chatted away on their exit 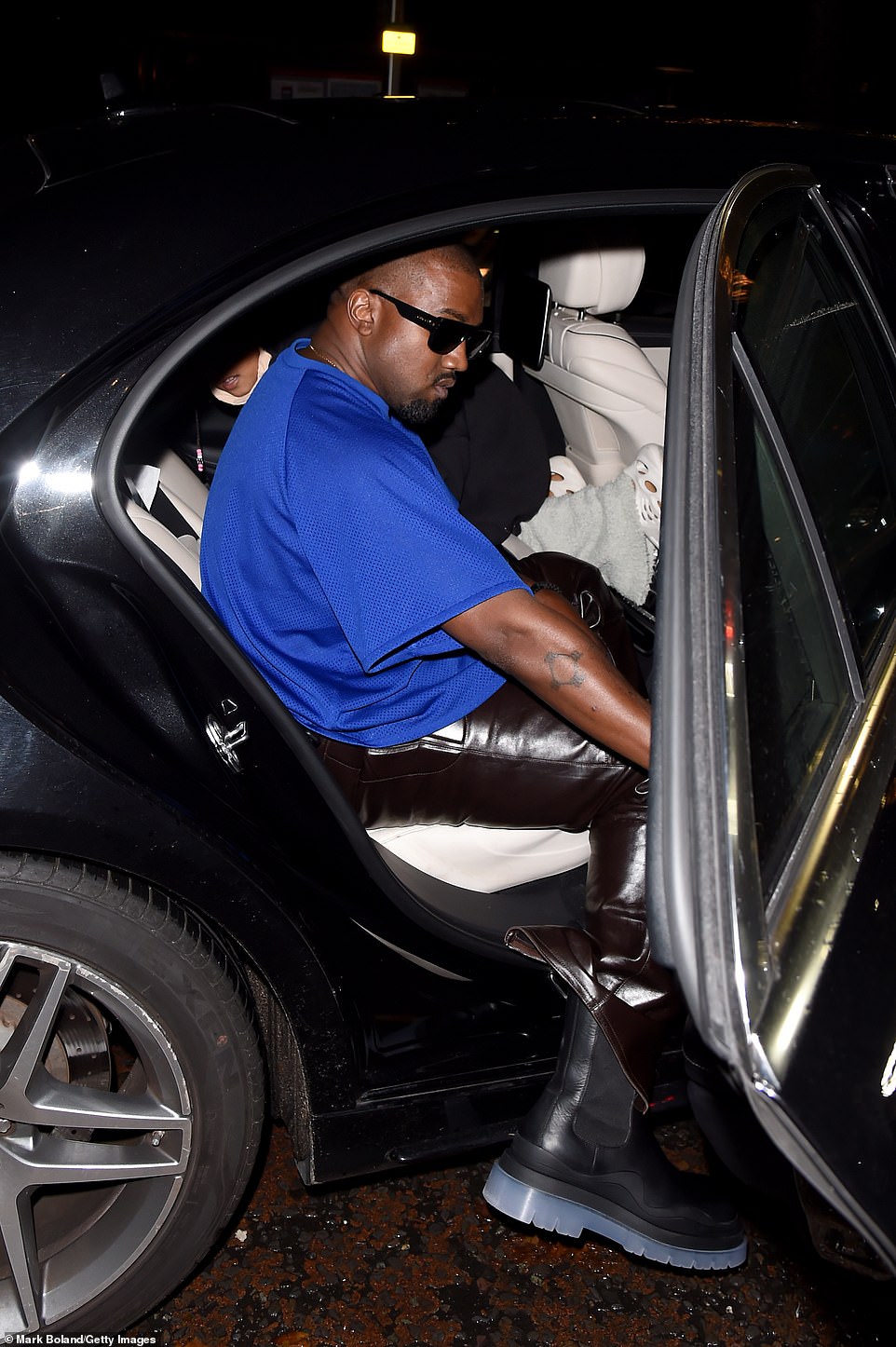 Heading out: Kanye and North hopped into a black car after attending the showcase at Sadler’s Wells Theatre 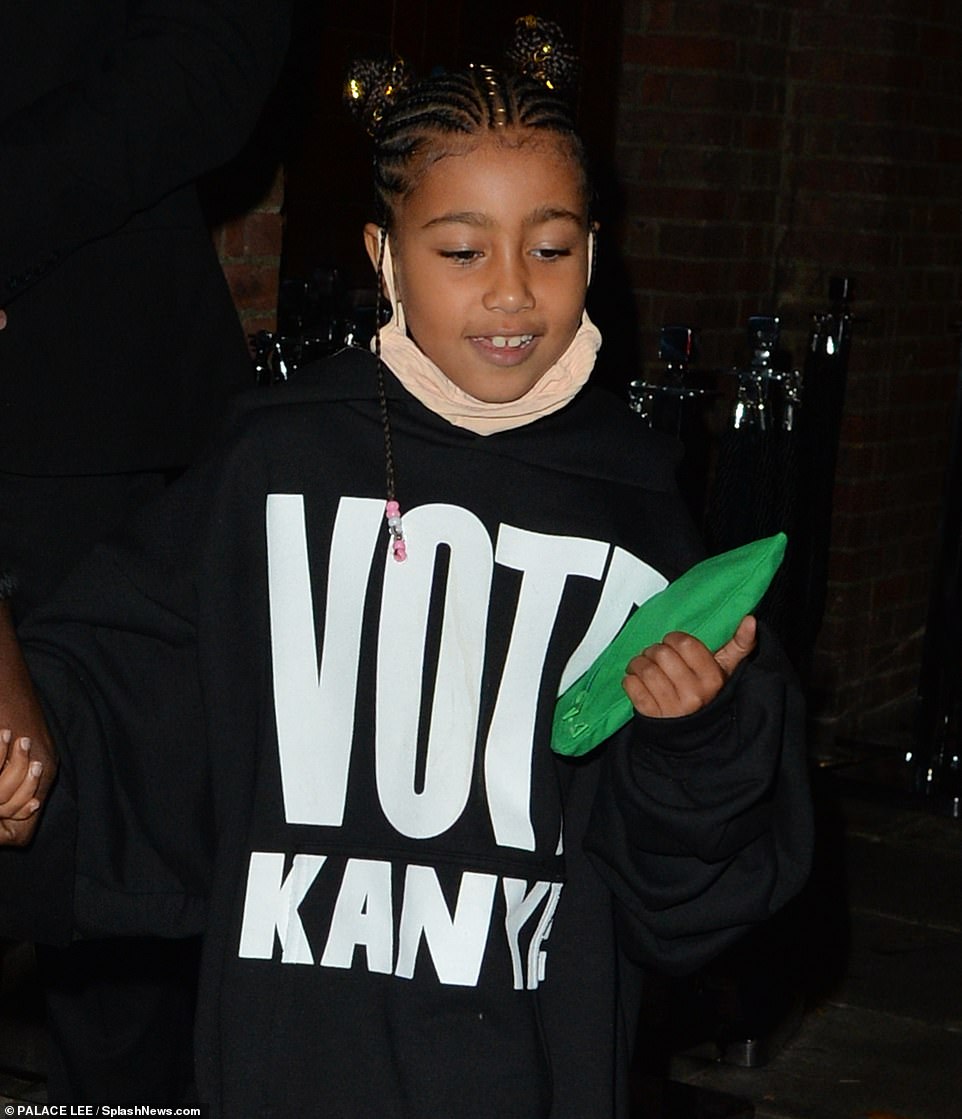 Support: North wore a matching hoodie to her fathers with the words ‘Vote Kanye’ emblazoned across the front 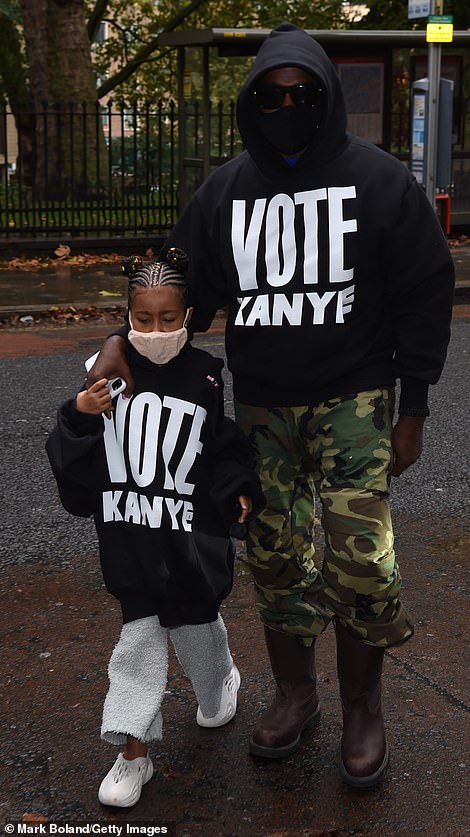 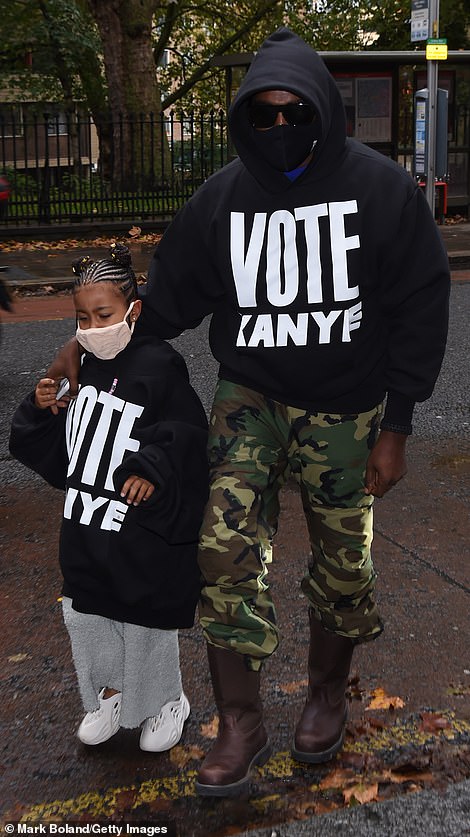 London calling: The family have recently enjoyed a break away to the Dominican Republic, which is not currently on the UK government’s travel corridor list of countries

The model wore an all-black ensemble beneath, made up of long black trousers and an elegant black roll-neck top to keep out the autumnal chill.

For footwear, Rosie donned a set of strappy black high heals, while she carried her essentials in a low-key black leather handbag with a gold chain.

Kanye’s appearance at the show comes after he enjoyed a holiday to the Dominican Republic with wife Kim Kardashian and their four children – North, Saint, Chicago and Psalm.

Kim shared sun-soaked snaps from the getaway on Instagram earlier this week, revealing that the family had enjoyed some quality time together. 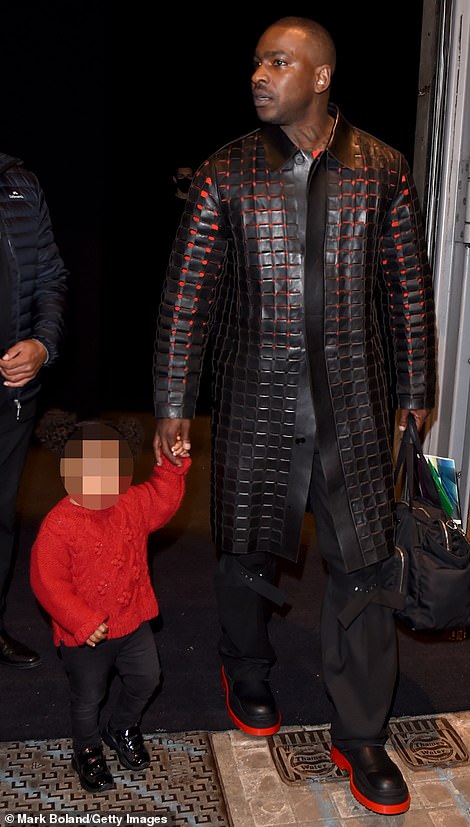 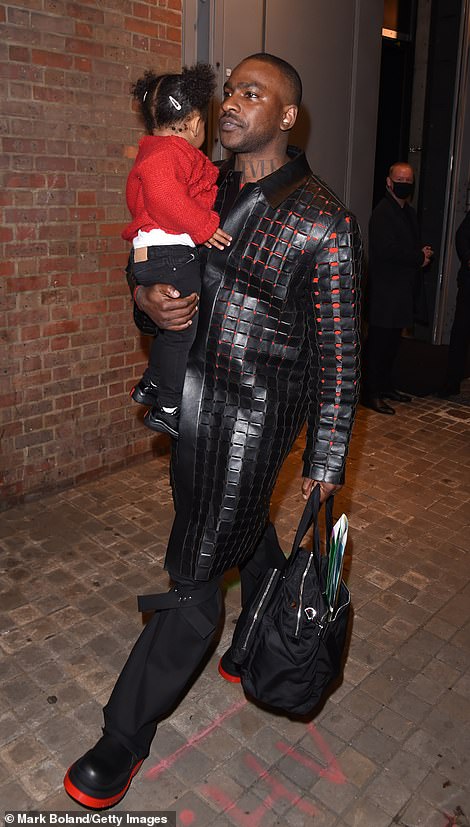 Dad and daughter: Rapper Skepta commanded attention in a black and red leather jacket as he attended the event with his adorable little girl River, two

Currently visitors going to the Dominican Republic have to self-declare if they have COVID-19 symptoms and may have to take a rapid diagnostic test.

Travellers also have to provide journey and contact details before they travel to the UK. The Dominican Republic is not currently on the UK government’s travel corridors list suggesting that arrivals should have to isolate.

It is also thought that the family jetted into the UK from their home in Los Angeles. America is also not on the travel corridors list, meaning visitors would usually have to quarantine for 14 days and fill out a passenger locator form.

This is the case for the majority of destinations around the world, with only a handful currently being exempt from advice against ‘all but essential’ international travel.

MailOnline has contacted both Kim and Kanye’s representatives for comment.

The appearance comes after Kanye released pricey merchandise referring to his presidential bid on Wednesday night despite not actually being on the campaign trail. 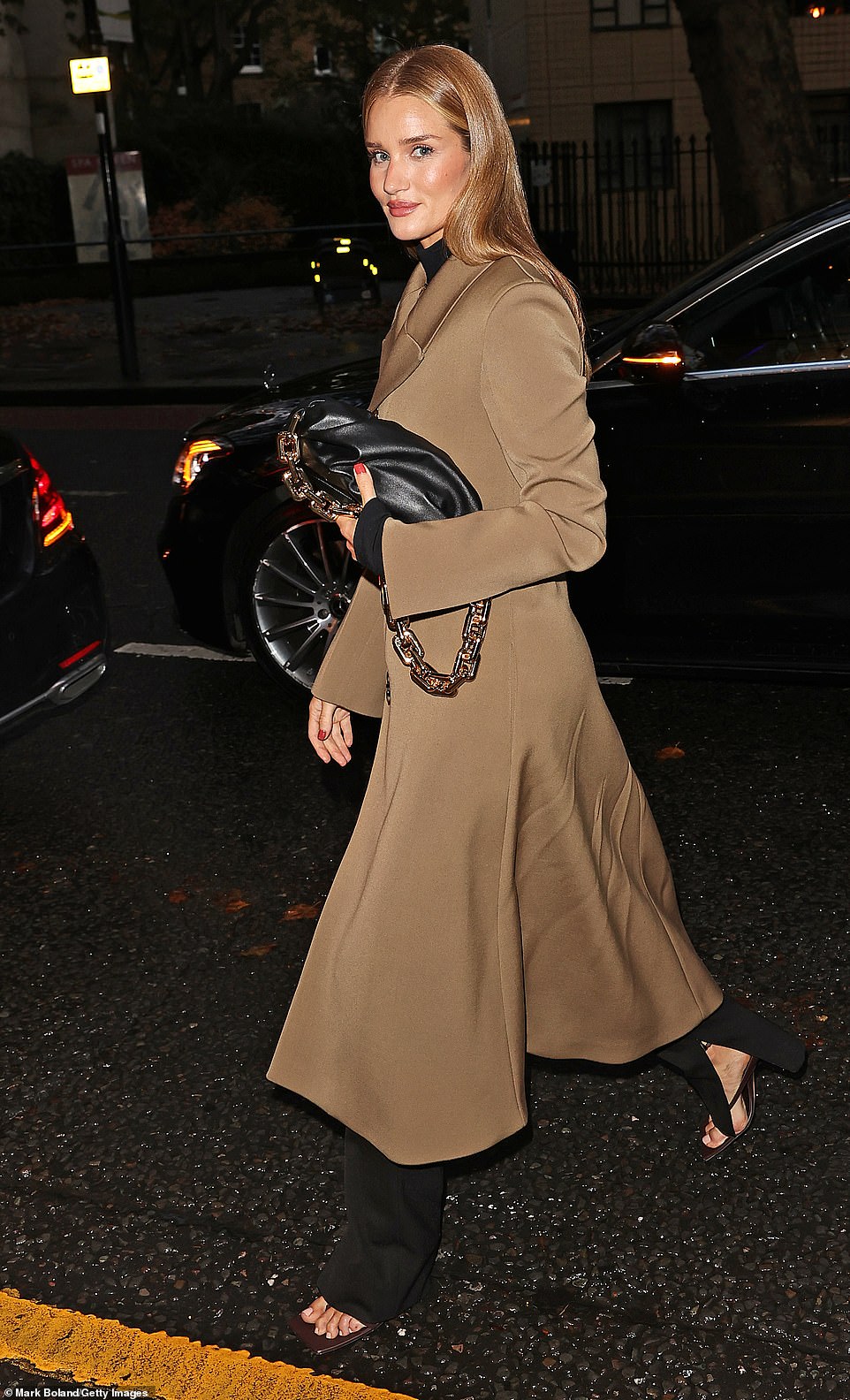 Chic: Rosie Huntington-Whiteley also turned heads as she made an appearance at a Bottega Veneta event in London 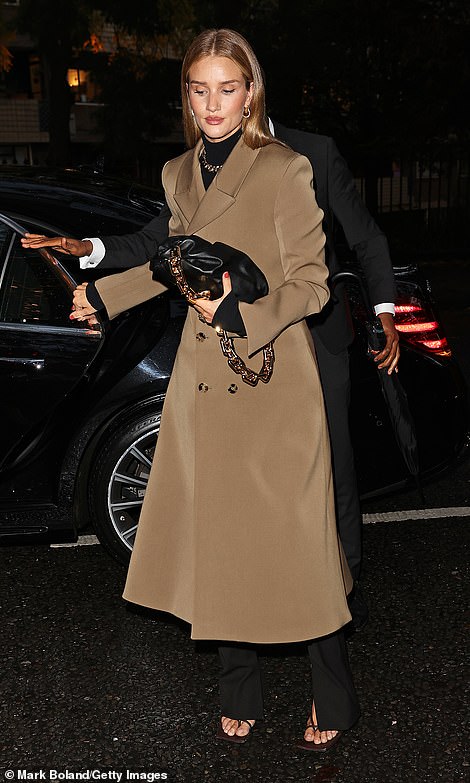 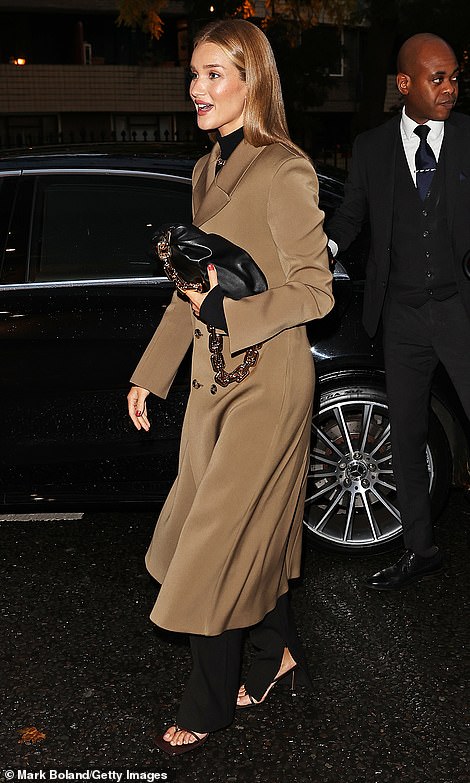 Wrapped up warm: The model donned a long camel coat and all-black ensemble beneath

However hours later the rapper bragged about having a net worth of $5billion after being millions in debt.

Kanye launched an online merchandise store and campaign site which included $60 hats and $160 hoodies during the Vice Presidential Debate between Mike Pence and Kamala Harris.

The All Of The Lights hitmaker promoted his new campaign site and newly released products by recording a video where he had his 2020 Vision campaign hats held in front the heads of the two vice presidential candidates as they viewed the debates on Kanye’s massive screen.

Kanye also released a summary of his presidential platform on the website which included restoring prayer in the classroom, equality in the criminal justice system, reducing debt, and focus on environmental causes.

On Thursday morning Kanye shared a screenshot of an article which said his net worth is estimated at $5 billion. 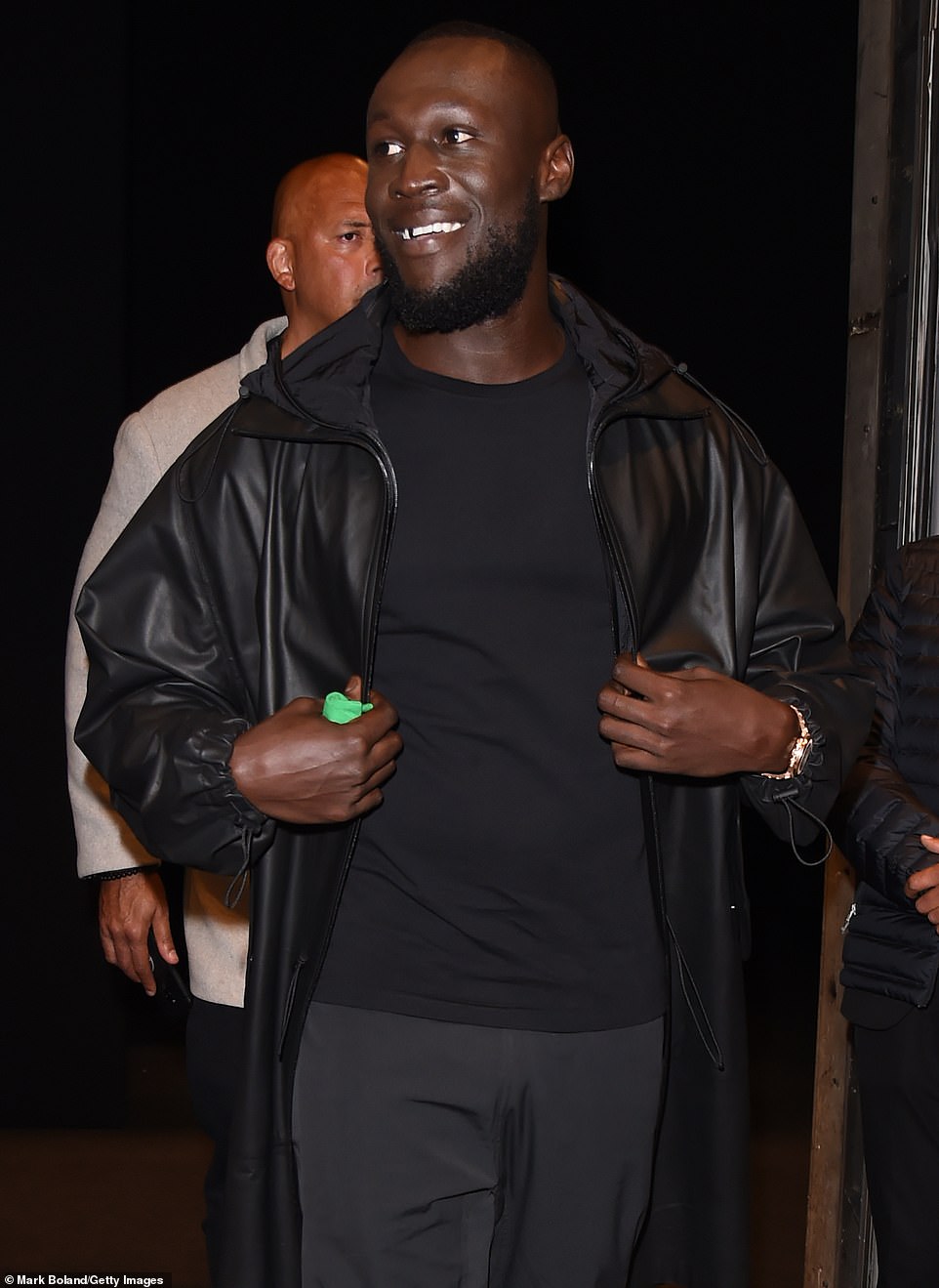 Dapper: Stormzy appeared to be in good spirits as he arrived at the star-studded show 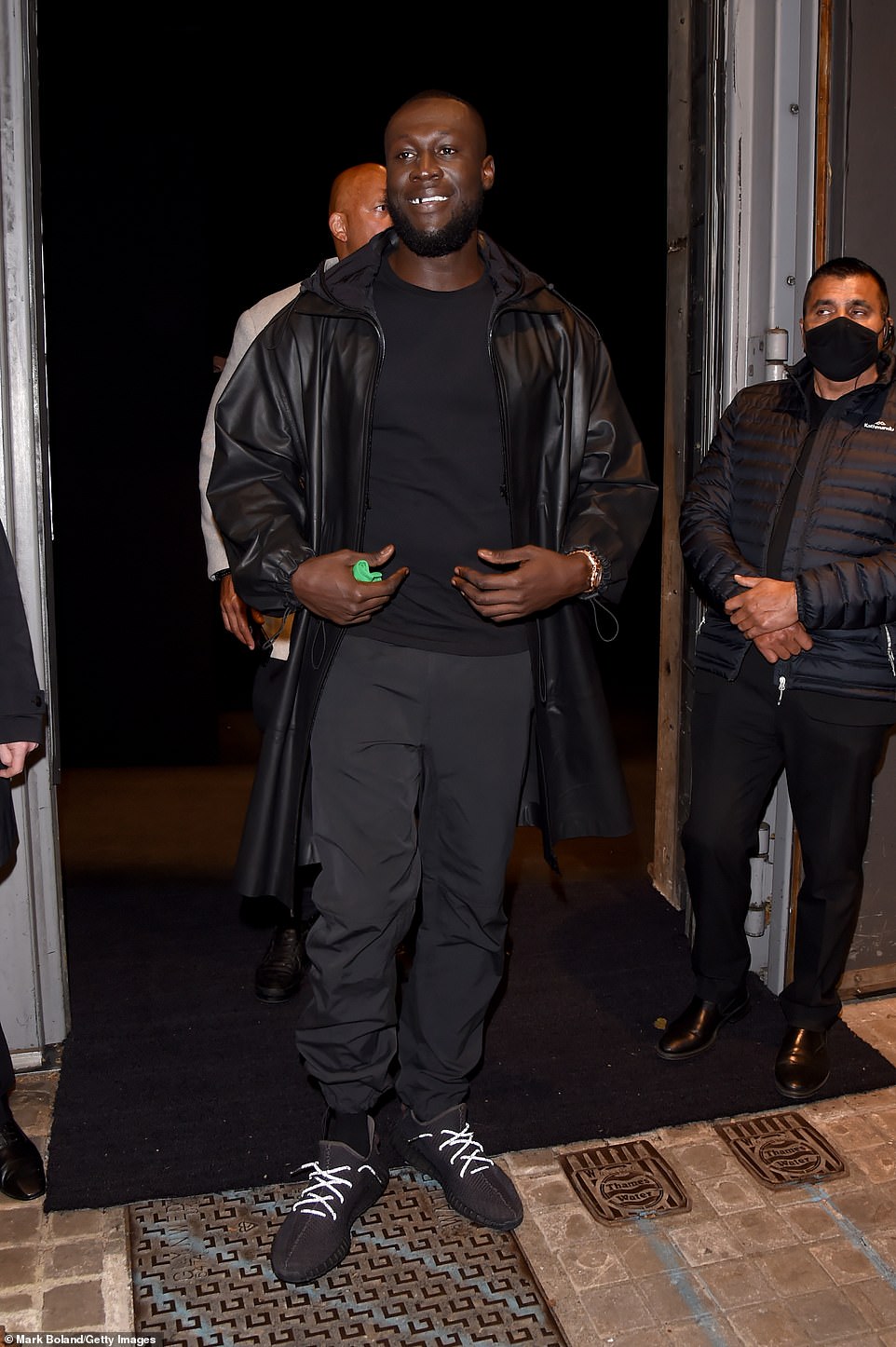 Stylish: The musician wore a leather coat over a fitted T-shirt and trousers as he stepped out 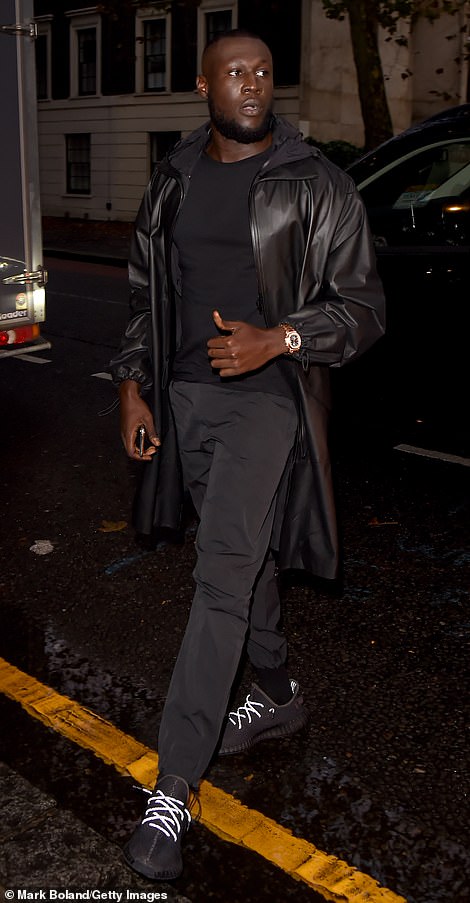 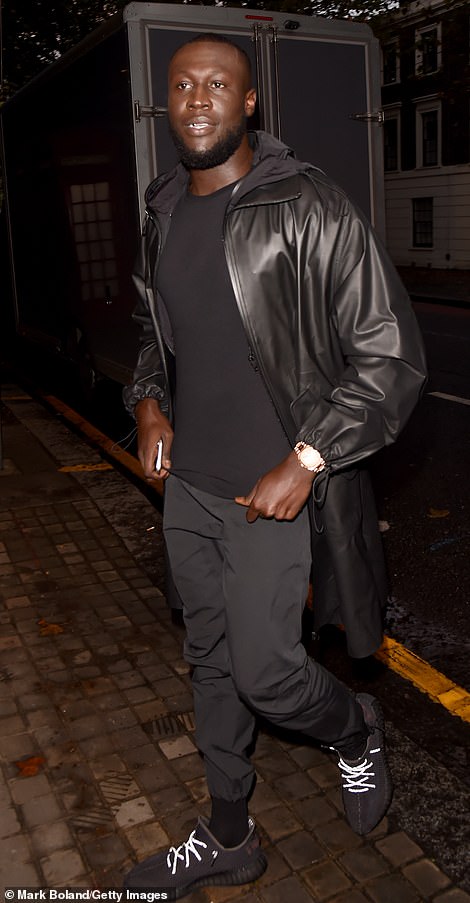 Details: The rapping sensational accessorised his outfit with a dazzling gold watch 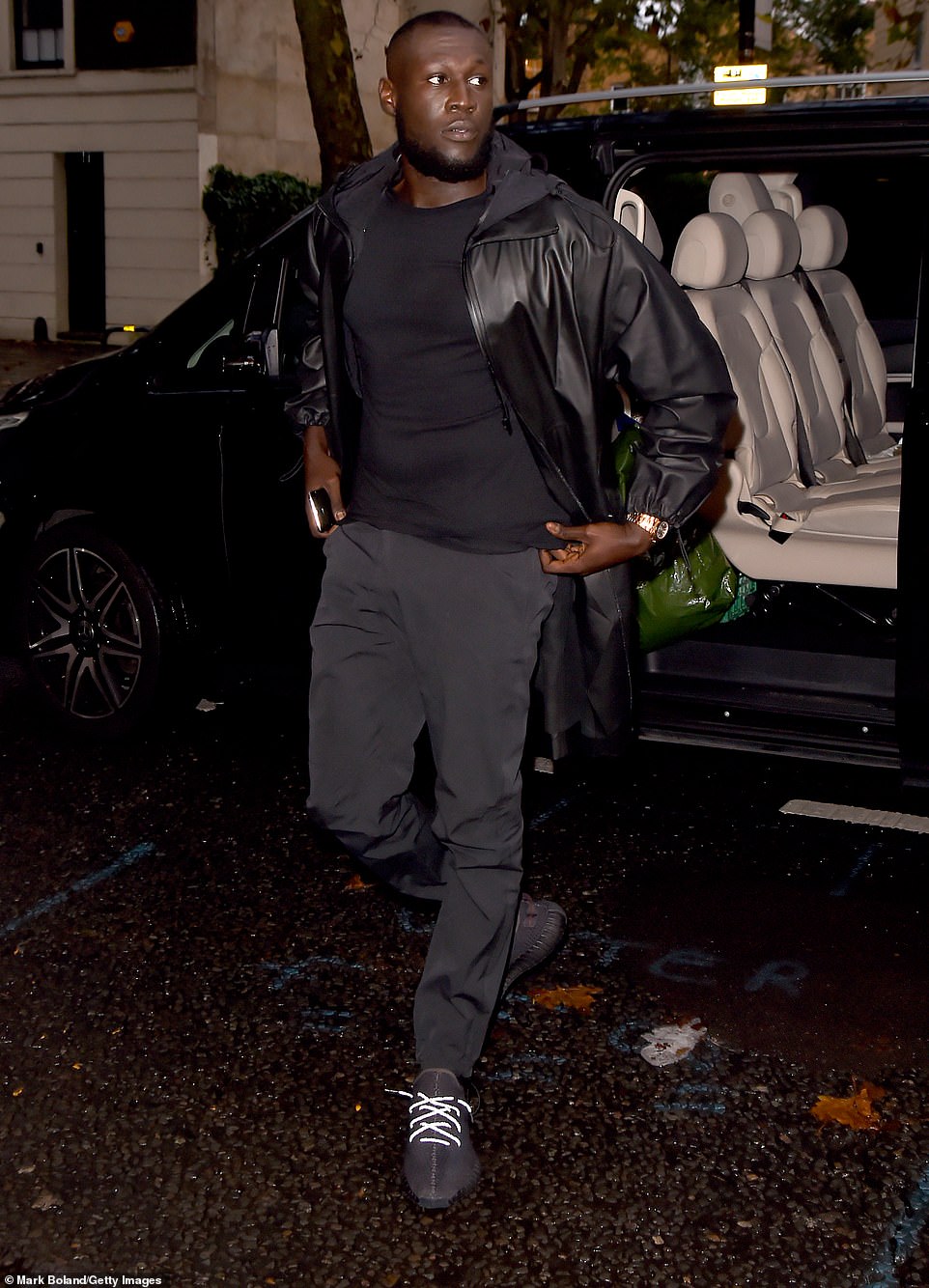 Suave: Stormzy exuded confidence as he stepped out of the car

He went on to brag about being a multi-billionaire as he captioned it: ‘From $53 million in debt to a net worth of $5 billion in 4 years. Thank you, Jesus. I know I fall short, but I repent. I am fully in service to our Lord and Savior Jesus Christ. We are building schools of the future. Thank God for providing the increase.’

The claim of his net worth comes at an interesting time as it was recently claimed that the rapper and footwear designer values three of his companies at $50 million each and says his partnerships with Adidas and Nike are worth a combined $30 to $75 million, Business Insider reported Monday.

However, he also disclosed he has up to $100 million of debt, mostly from mortgages. His finances are set out in personal financial disclosure forms filed with the Federal Election Commission as required by all candidates for public office. 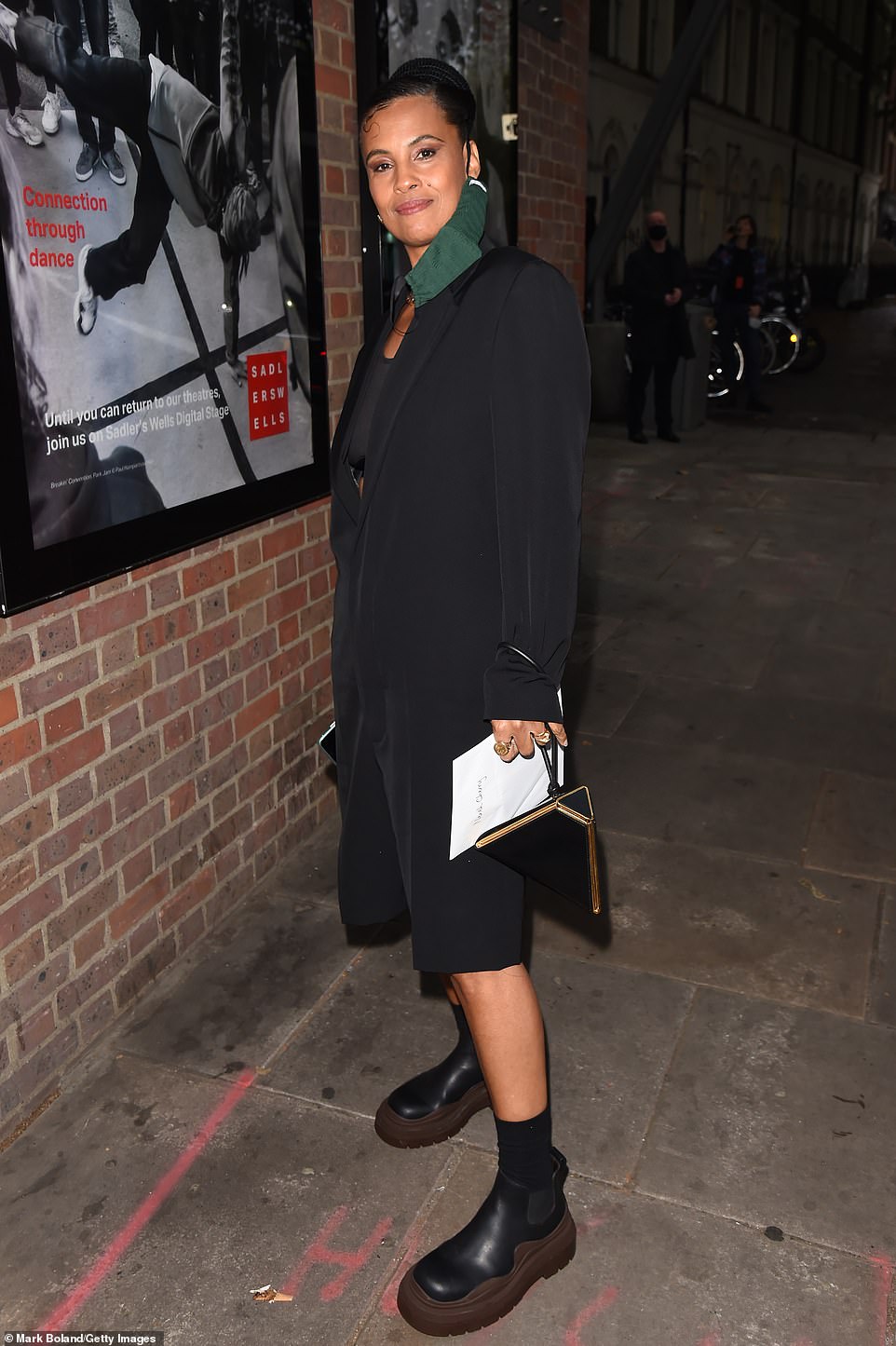 Strike a pose: Neneh Cherry also put on a fashionable display in a long black coat and chunky leather boots with a brown sole 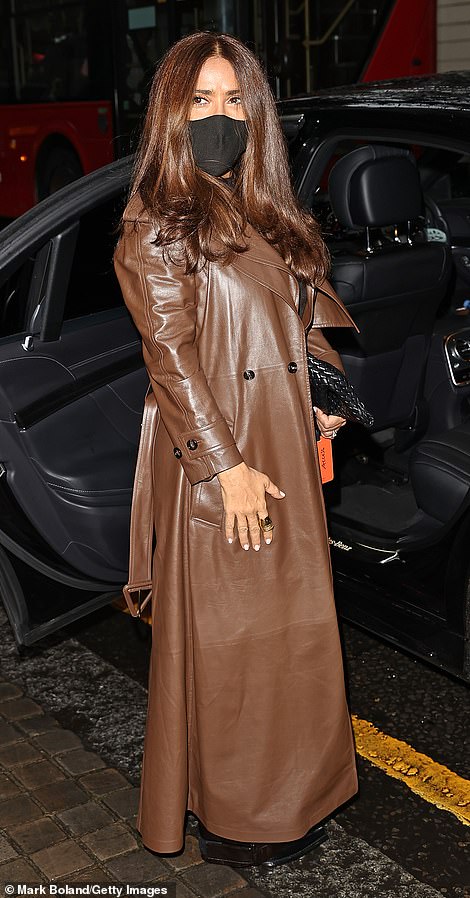 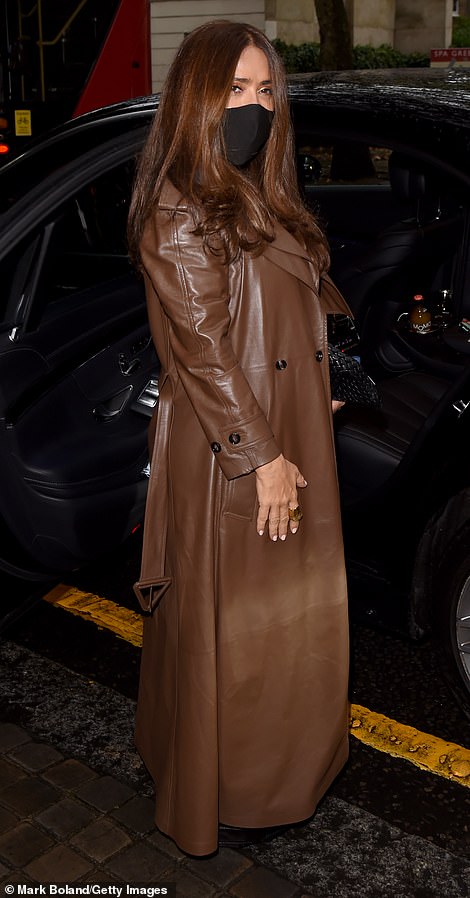 Stunning: Salma Hayek looked sensational in a long brown jacket as she led the star-studded guests 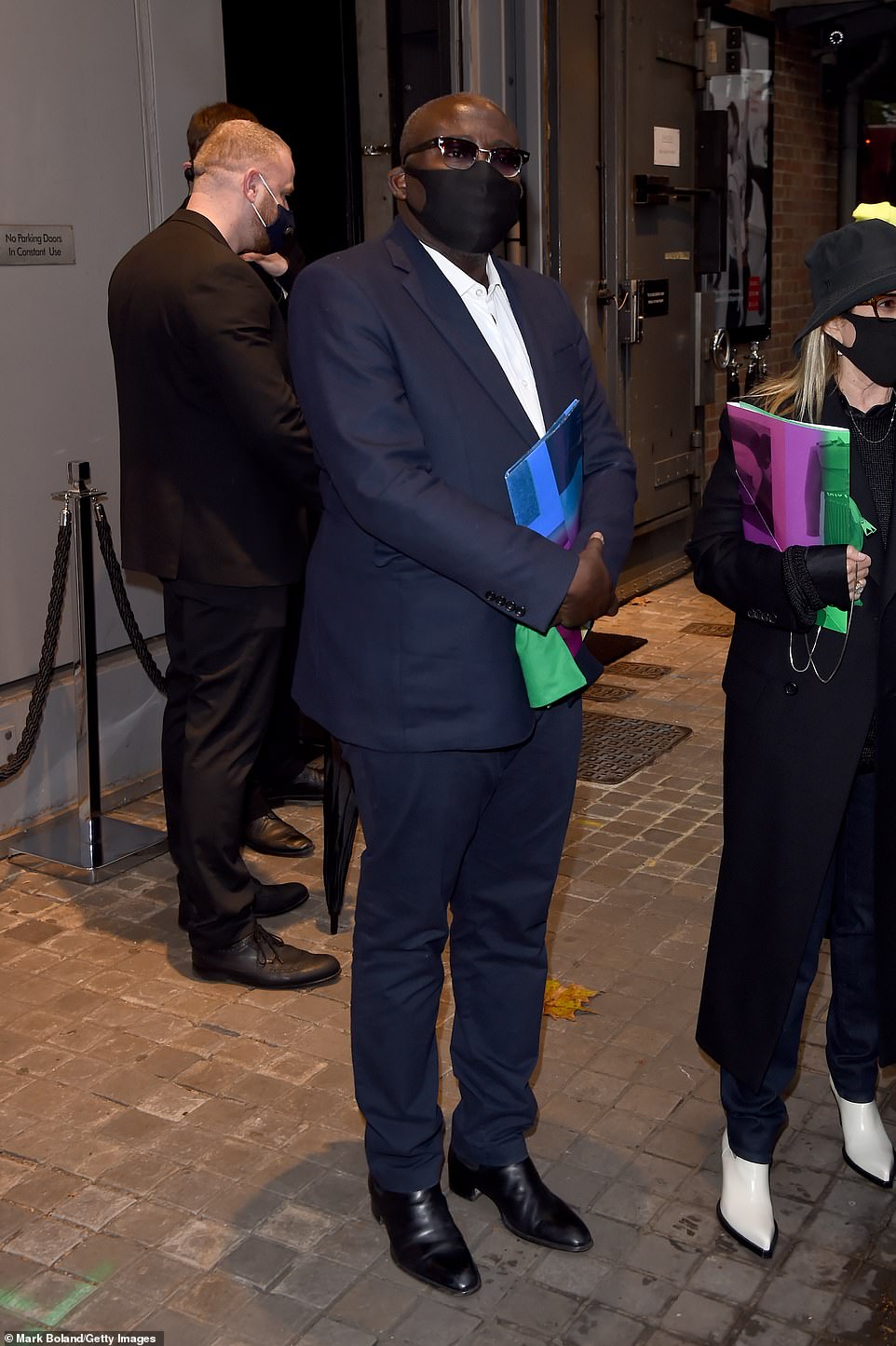 In the know: Edward Enninful looked dapper in a navy suit and pointed leather shoes at the fashion event

Kanye announced in July he was running for president as an Independent in a self-funded campaign.

By late summer, according to the documents obtained by Business Insider, he had spent $6.7 million that he loaned his campaign.

But he has failed to make the ballot in most US states and the District of Columbia. Kanye has made it onto the ballot for 12 states including Kentucky, where he allegedly spent $400k to get the necessary signatures, and in Iowa, after reportedly paying $80k. 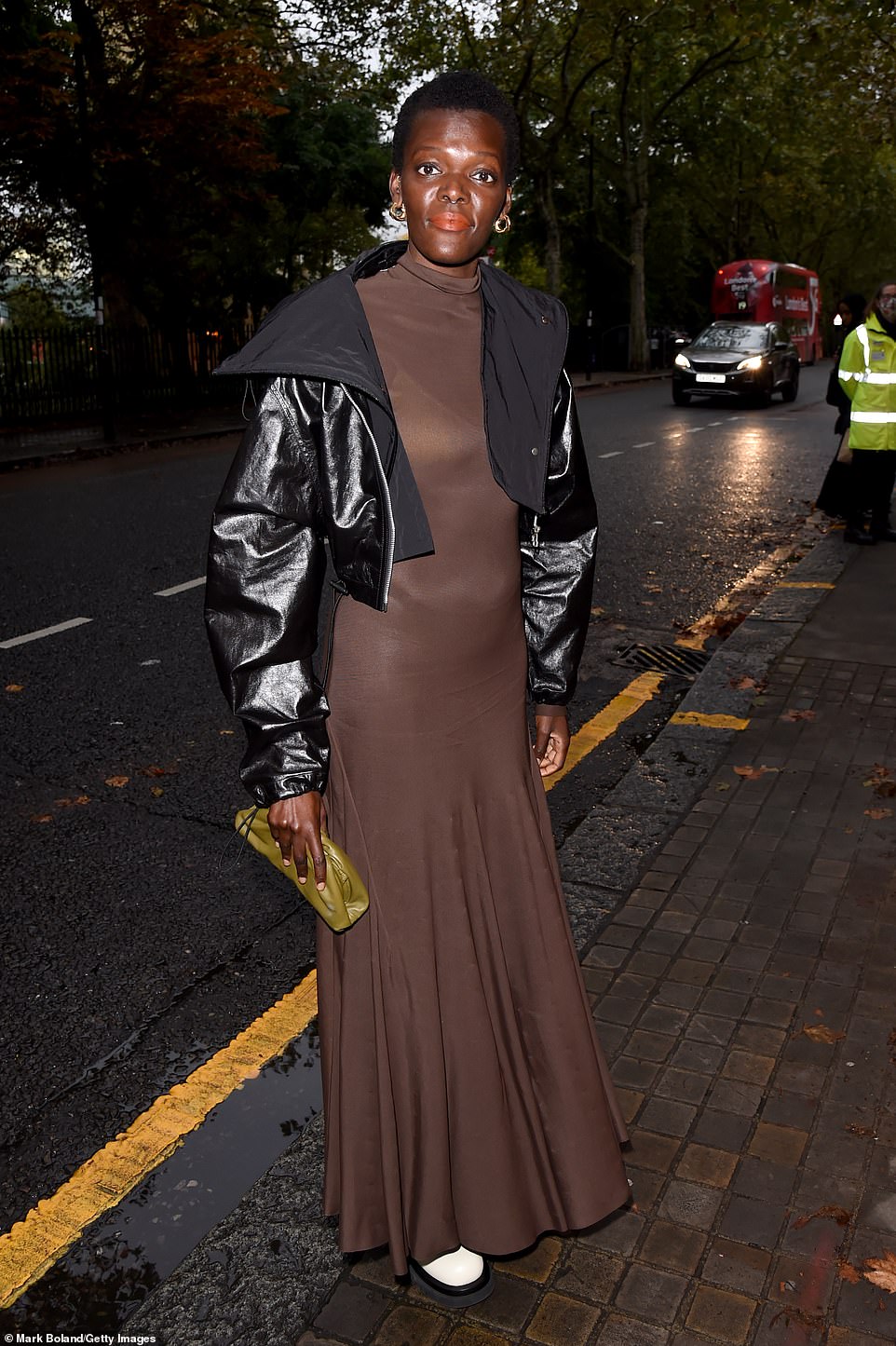 Fashion: Sheila Atim wowed in a brown maxi dress and black jacket, which she paired with some bright white shoes 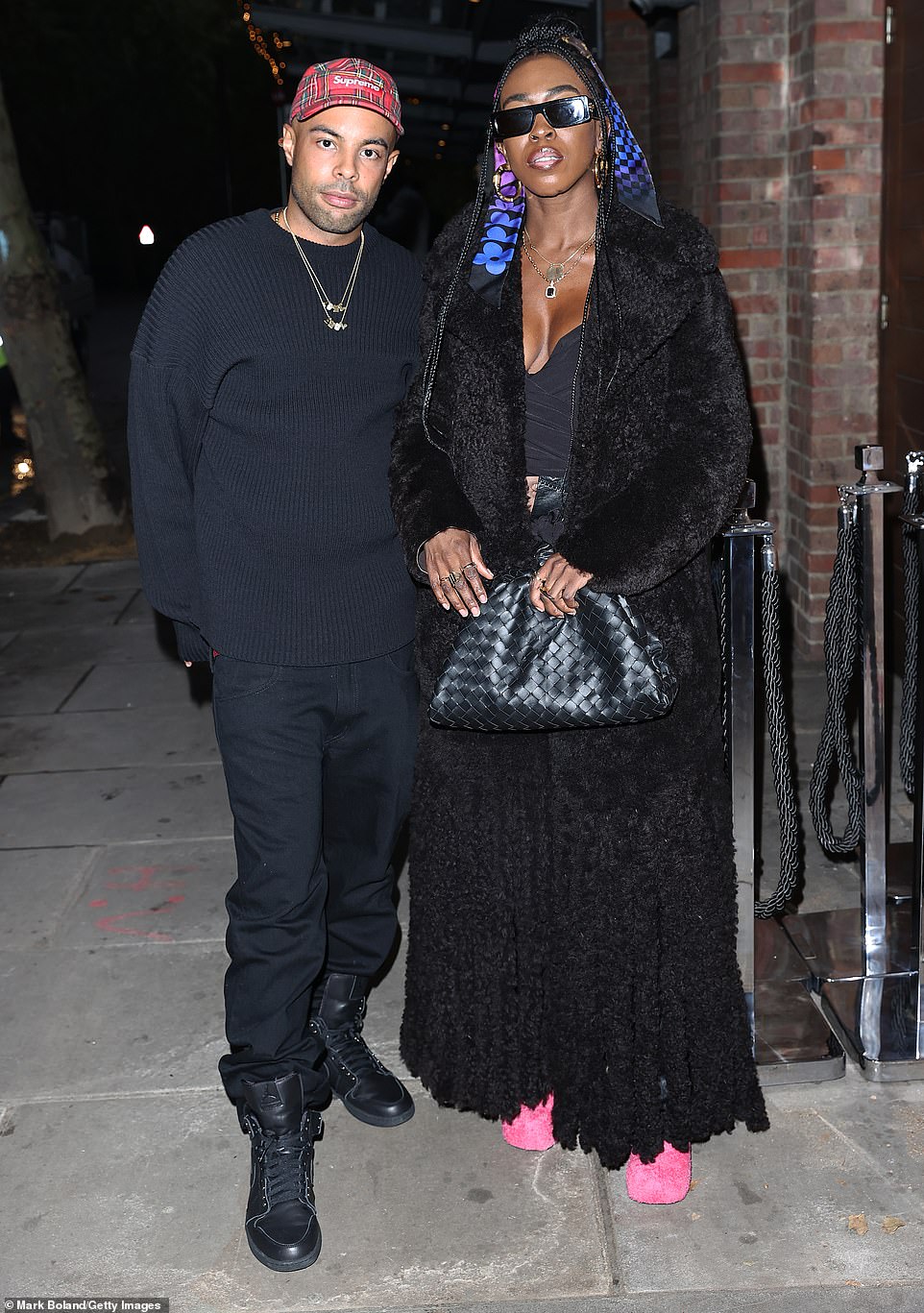 Arrivals: Alex Sossah (left) and Grace Ladoja also went for all-black ensembles, with Grace adding a pop of colour with some pink shoes