By David Lawrance For Dailymail.com

And Kendall Jenner turned New York City‘s streets into her own personal catwalk when the 25-year-old stepped out on Thursday.

The sister of makeup mogul Kylie Jenner insulated herself against the Fall chill in a stylish brown trench coat for the outing. 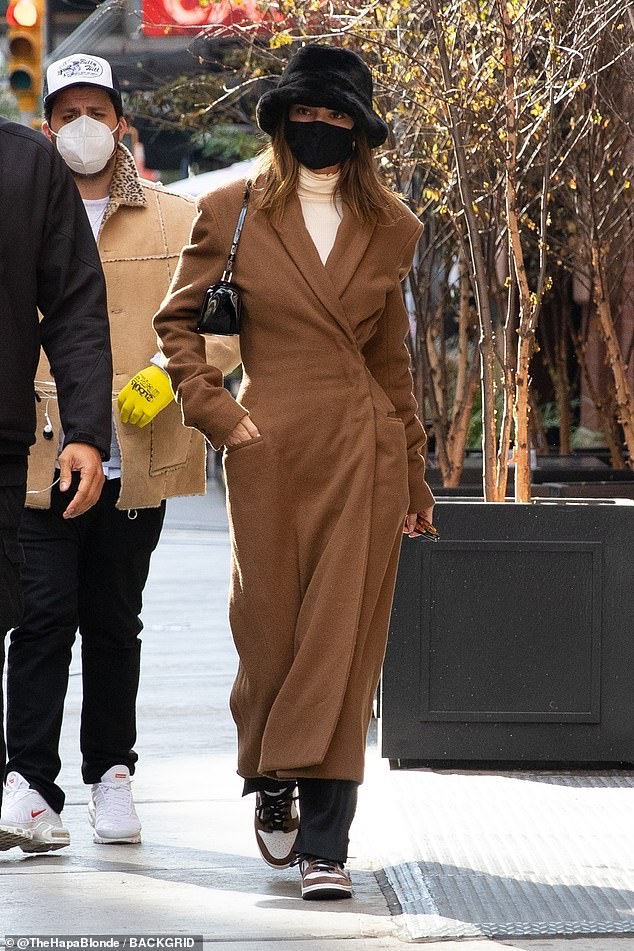 Catwalk stunner: Kendall Jenner turned New York City’s streets into her own personal catwalk when the 25-year-old stepped out on Thursday

The reality TV star wore the coat over a cream turtleneck and dark pants.

She accessorized with a black felt bucket hat, Nike sneakers and in a concession to the worsening COVID pandemic, a black face mask.

That wasn’t always the case, as earlier this month Kendall threw a wild birthday bash at Harriet’s Rooftop in West Hollywood’s 1 Hotel during which 100 guests reportedly refused to wear face masks.

According to The Sun, an insider said: ‘Kris and the entire family were well aware of the LA CDC rules and chose not to follow them. Because the party was on an outdoor deck, they felt they were doing their party in being safe. 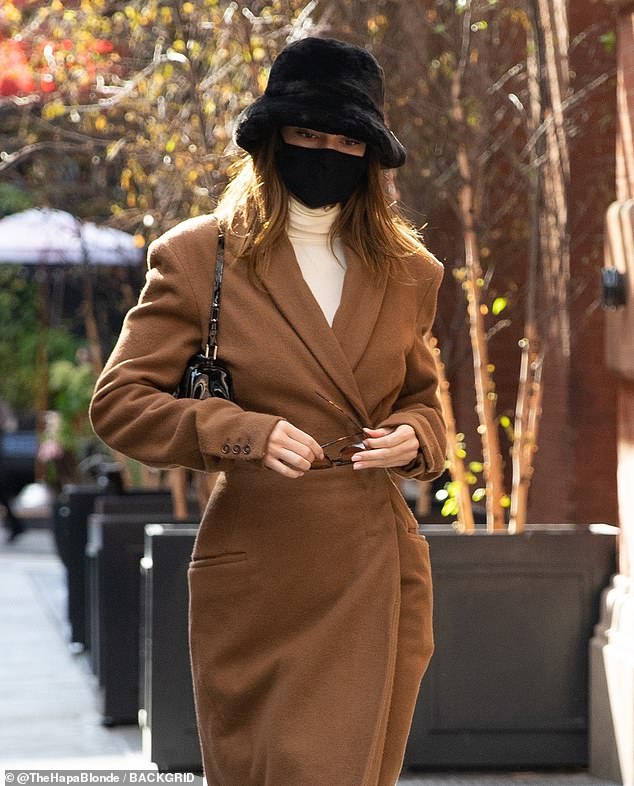 Bundled up: The sister of makeup mogul Kylie Jenner insulated herself against the Fall chill in a stylish brown trench coat for the outing 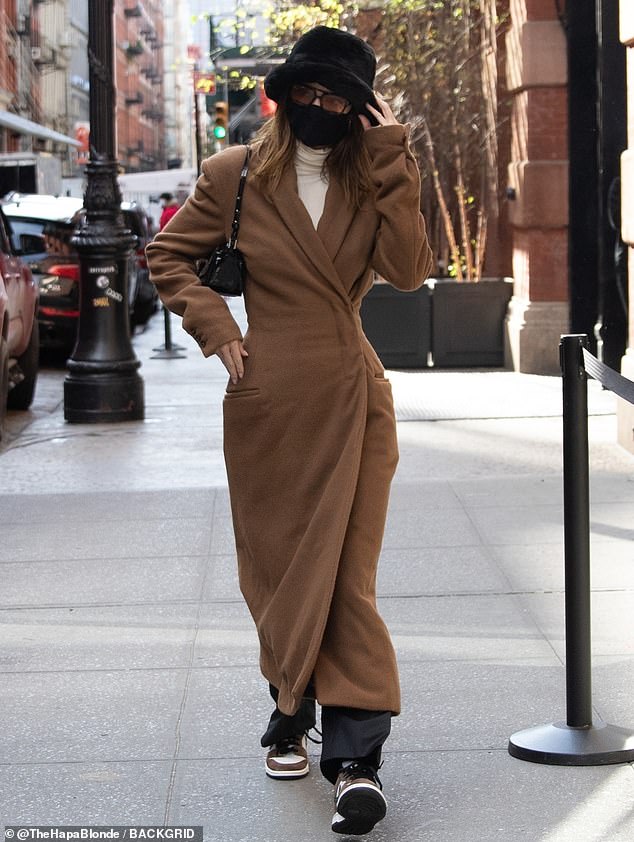 Final touches: She accessorized with a black felt bucket hat, Nike sneakers and in a concession to the worsening COVID pandemic, a black face mask 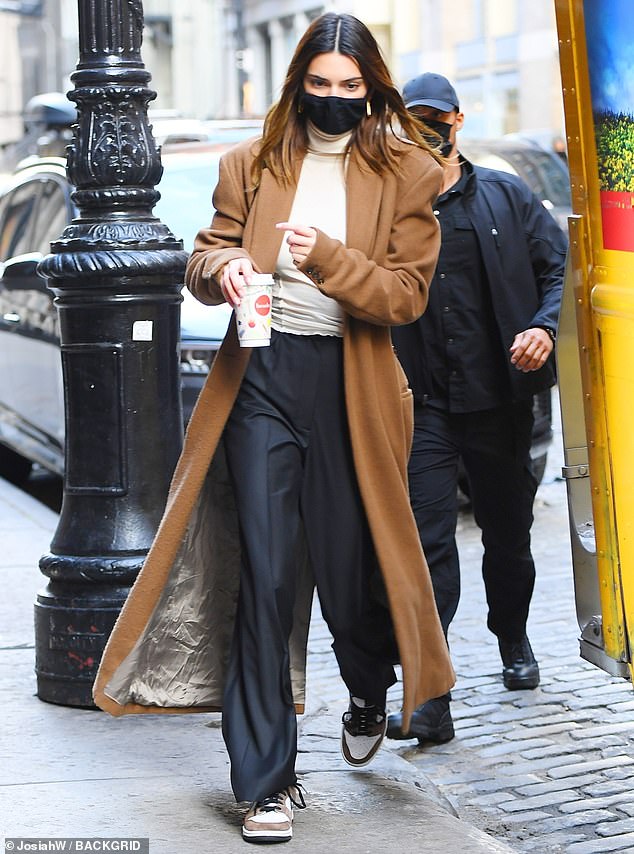 Ladies who lunch: After meeting up with pal Bella Hadid for lunch, Kendall returned to her hotel 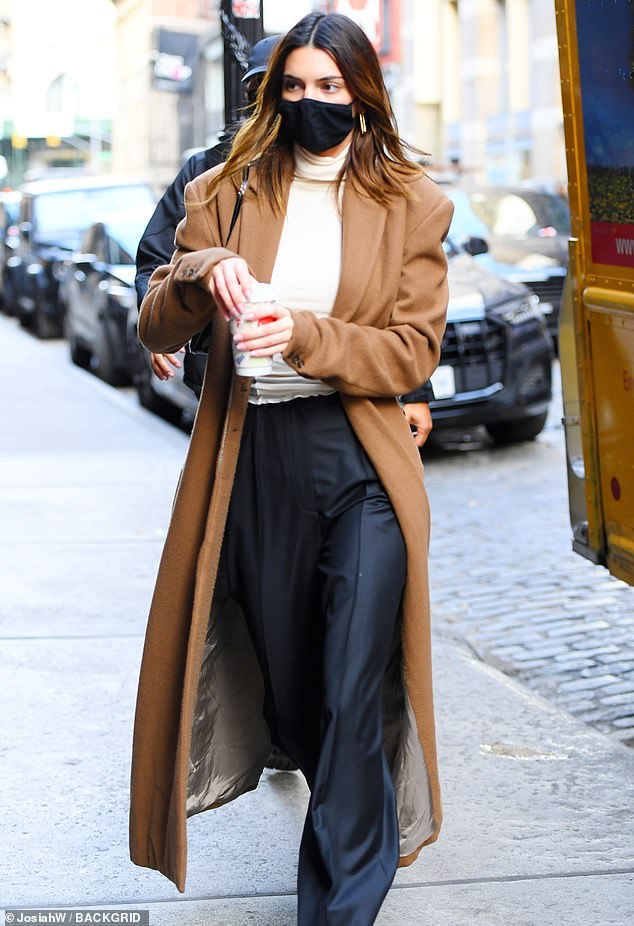 Taking measures: She suited up in a black face mask, taking the pandemic seriously for a change, after hosting a series of raucous gatherings

‘But there was no social distancing, no masks besides the staff and over 100 people. The staff were under the impression it would be handled safely, no one felt comfortable.

‘They knew this party was going to be a bad look and they did not care. The family was openly talking about it before the party and debating how to best handle it. They decided to just go through with it and have a good time.’

The soirée – which saw the likes of The Weeknd, Justin Bieber, Jaden Smith and Winnie Harlow in attendance – came just weeks after Kim Kardashian was met with criticism for flying her family and friends to a private island to celebrate her 40th birthday.

DailyMail.com contacted representatives for Kendall and 1 Hotel for further comment at the time. 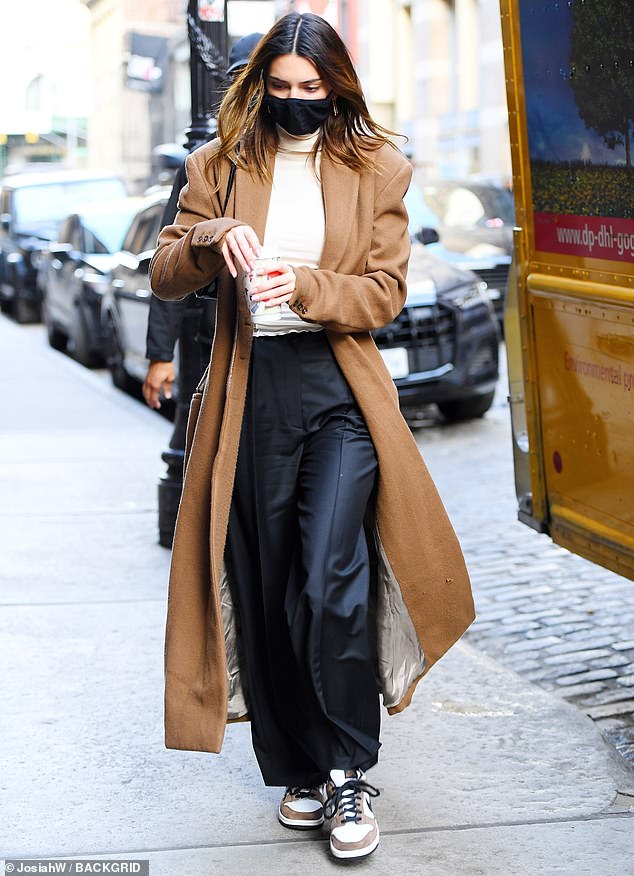 Staying warm: She carried a beverage in her hand as she braved the notably cooler East Coast weather 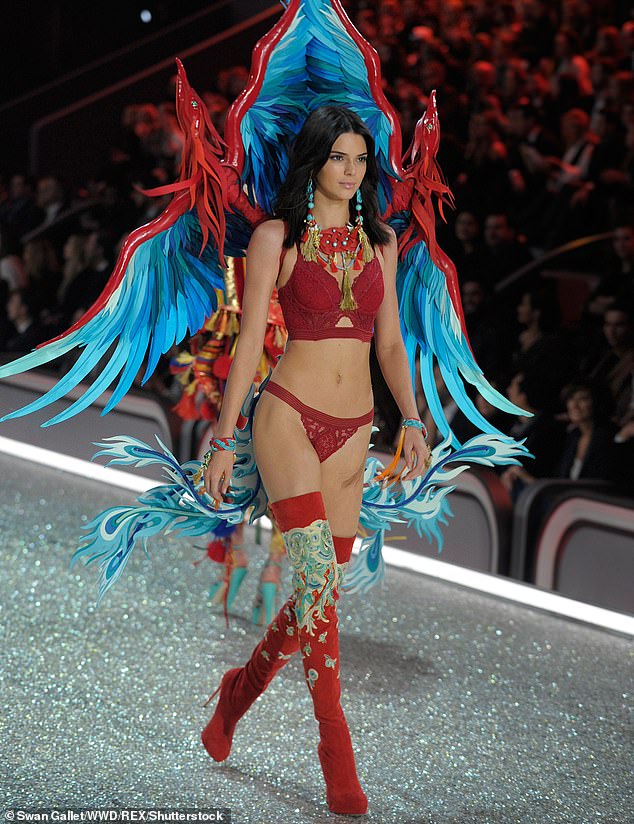 Strike a pose: Jenner is among the world’s highest paid supermodels. Seen here in 2016 at a Victoria’s Secret fashion show

Kendall’s mother Kris, 64, defended her party as she claimed protocols were in place for a healthy celebration for all.

The reality star told Andy Cohen’s SiriusXM show about the expansive testing precautions in place for a packed guest list.

‘We are very lucky to work in an industry where we get tested once or twice a week,’ the matriarch said. ‘I just got tested again. I was tested on Friday, because of the network rules while we are filming as you know, so that’s very strict.’

‘Whenever we have a gathering – no matter how big or small – no matter, you know, whether it’s five people or 25 people, you know, or 20 people, we have, like at Kendall’s, everyone got tested before they walked in the door and they had to wait, you know, a half an hour until the testing was, the results were in.’ 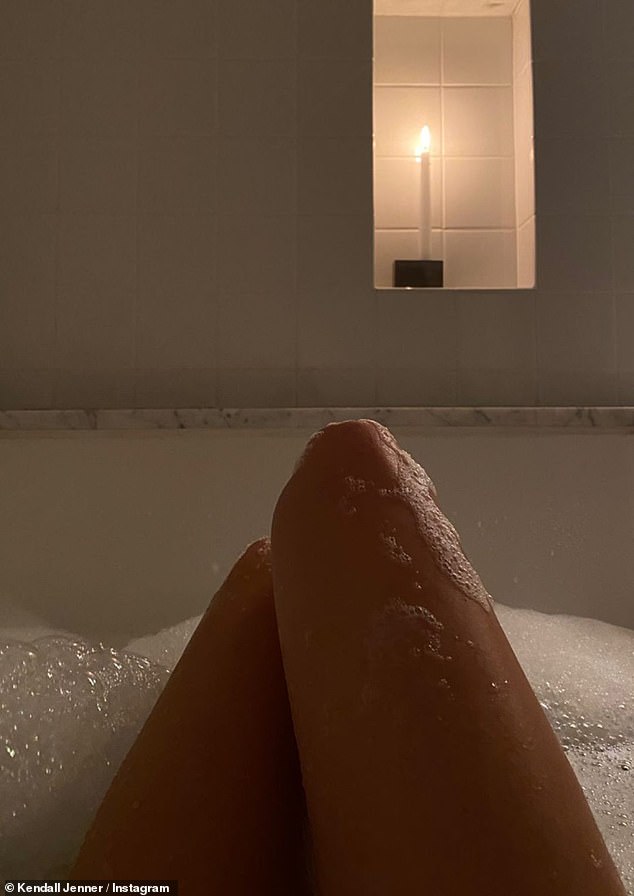 Down time: On Wednesday, the KUWTK star shared an image of herself relaxing in a bath to Instagram