Her post came two weeks after Page Six reported that Kylie had spent around $130 million in just a few months before Forbes downgraded her billionaire status.

Khloé caught the inside of the jet while it was bathed in pink light, which may have been part of the interior decor that was inspired by Kylie’s daughter’s birthday theme.

She had a ‘Kylie Air’ napkin on her table and the window reflection revealed two plates with the remains of a meal.

The Revenge body host managed to capture a burst of light before the sun went down.

It wasn’t clear from her post if she recently took a trip or simply shared a throwback photo. 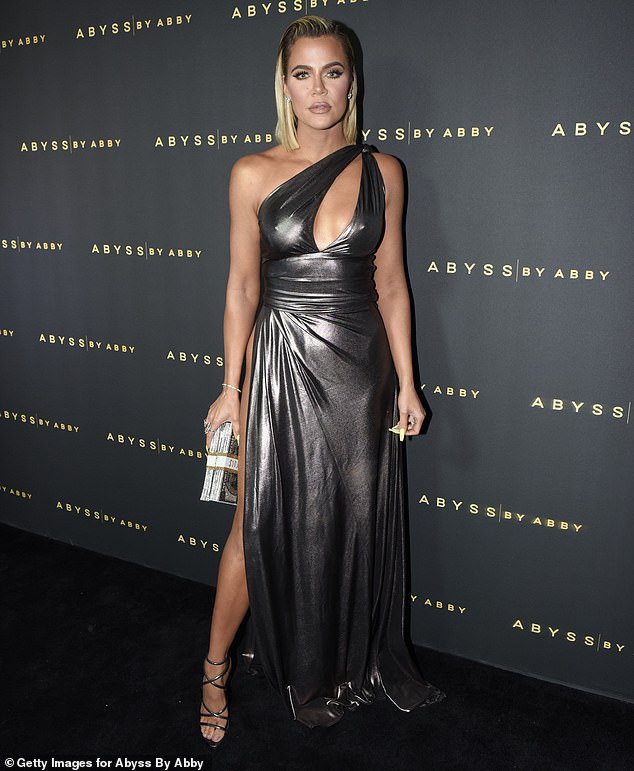 Special display: Khloé caught the inside of the jet while it was bathed in pink light, which may have been part of the decor that was inspired by Kylie’s daughter’s birthday theme; shown in January 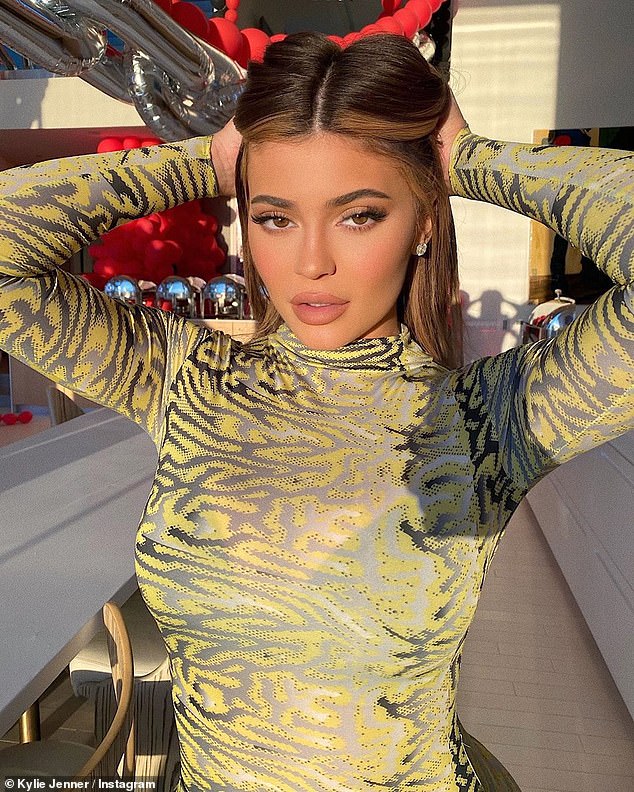 Travel buddies: It wasn’t clear if Khloé had traveled with Kylie, or if it was a recent trip

Kylie‘s billionaire status was stripped from her by Forbes in May after it exposed what it claimed was a ‘web of lies’ surrounding the state of her finances.

Amid accusations that the Jenner family ‘inflated’ the makeup mogul’s net worth and that she’s actually only worth $900 million, the report claimed Kylie had certainly been living like a billionaire.

The 22-year-old reality star reportedly spent over $130 million in the past year alone, dropping millions on multiple real estate deals and a top of the line private jet. 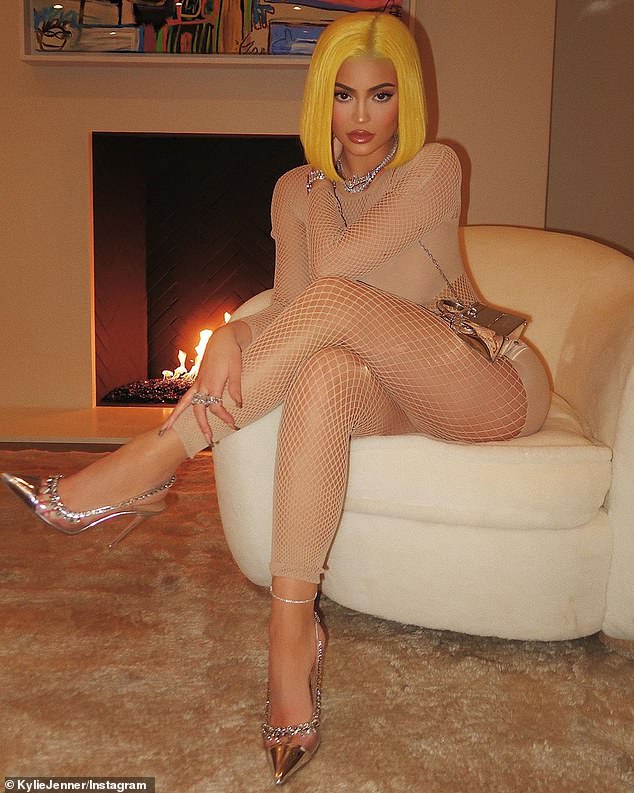 Spending spree: Kylie Jenner ‘blew through over $130 million in the past year’ a new report claims. It comes after Forbes published a bombshell report claiming Jenner lied about her net worth

Before the pandemic, Page Six reports Kylie plunked down between $50 and $70 million on a Global Express Jet – a plane which is larger than a Learjet and can carry more fuel and fly longer distances.

The craft is expensive to maintain, at around $5 million a year, and can’t land at most private airfields because it needs a longer runway.

Stormi turned two in February and was treated to a ‘Stormi World’ bash which was a sprawling multi-color carnival playground for the tot along with dozens of party guests. 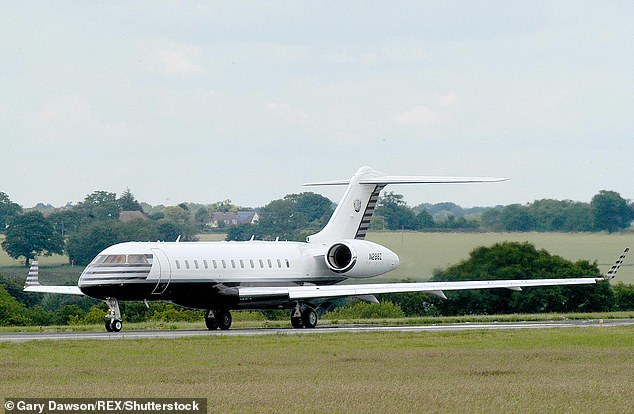 Big purchase: Before the pandemic, Page Six reports Kylie plunked down between $50 and $70 million on a Global Express Jet (similar to the one pictured) – a plane which is larger than a Learjet and can carry more fuel and fly longer distances 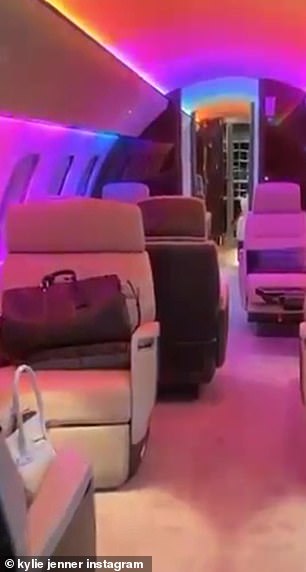 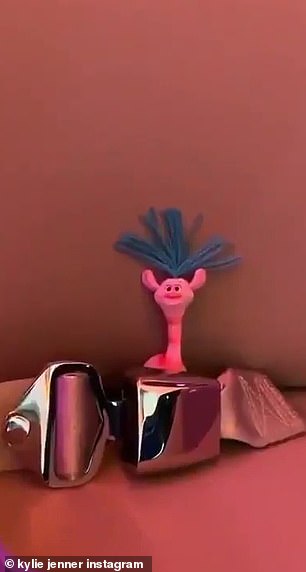 Multicolor jet: Kylie reportedly got the jet interior customized ‘in the theme of daughter Stormi’s birthday’

She also bought a vacant plot, next to her current $12 million Hidden Hills mansion, for $15 million.

The Lip Kit creator has reportedly hired Tom Brady’s architect Richard Landry to build a new property on the land.

The mother-of-one also bought land in La Quinta near Palm Springs for $3.25 million and has plans to build a retreat at the exclusive Madison Club next to mom Kris Jenner’s desert getaway.

And that’s not all, Kylie is known to be generous with her charitable donations, donated millions to help with coronavairus pandemic relief and the Australian wildfire relief. 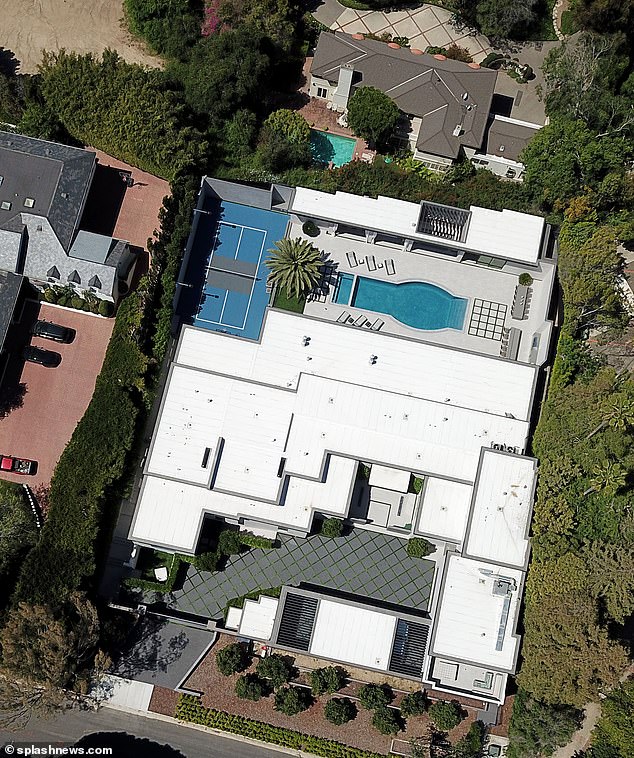 Why Forbes stripped Kylie Jenner of her billionaire status

Forbes named Kylie the world’s youngest self-made billionaire in 2019 and again in 2020.

The business magazine published a report on May 29 accusing the Jenner family of creating a ‘web of lies’ and said Kylie had inflated the size of her business and success.

Based on filings from beauty giant Coty, which acquired a 51 percent stake of Kylie’s makeup company in January at a valuation of $1.2 billion, Kylie Cosmetics generated revenues and profits that were far lower that the figures touted for years by the Jenner-Kardashian clan.

The publication accuses her of ‘lying about company figures and forging tax returns’ to be dubbed a billionaire.

Forbes explained that it had been shown 2016 tax returns indicating revenue far higher than the numbers revealed by Coty’s filing, and that there were only two explanations: Kylie Cosmetics’ sales had utterly collapsed in the two years before the acquisition, or the tax returns were fabricated.

Forbes now think that Kylie, even after pocketing an estimated $340 million after tax from the sale, is not a billionaire. Their new calculations put Kylie’s personal fortune at just under $900million.

Her property portfolio also includes a $13.45 million Beverly Hills mansion that she shares with ex-boyfriend Travis Scott and which the duo use as an investment property.

Page Six reports that Kylie’s sisters are worried about her spending.

A source told the website, ‘Kylie’s sisters are concerned about her spending. Yes, she’s got a lot of money — but she doesn’t seem to realize how easy it is to blow through all of it.

Meanwhile, Kylie’s lawyer has demanded Forbes ‘immediately and publicly retract’ their statements on her billionaire status. 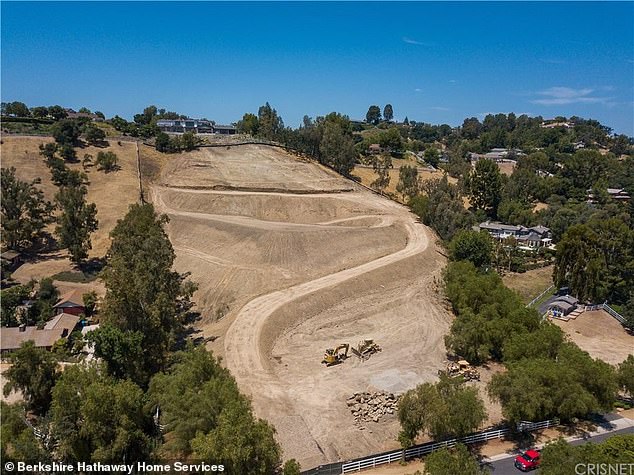 Ready to build: This is the plot that Kylie plans to build on, she has reportedly hired Tom Brady’s architect to design the property 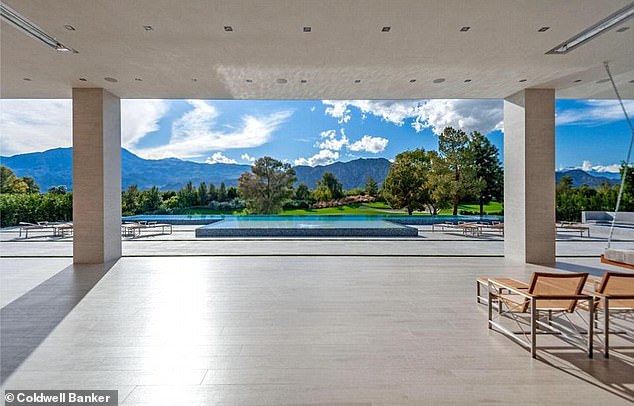 Close by: The mother-of-one also bought land in Palm Springs for $3.25 million and has plans to build a retreat at the exclusive Madison Club next to mom Kris Jenner’s desert getaway (pictured)

The television personality was given the title of the youngest self-made billionaire by Forbes earlier this year and also in 2019, but this week the company published a scathing article in which they claimed Kylie is not a billionaire, and accused her of spinning a ‘web of lies’ about her business including her Kylie Cosmetics brand.

Michael said in his statement: ‘We have reviewed Forbes‘ article accusing Kylie of engaging in deceit and a ‘web of lies’ to inflate her net worth. The article is filled with outright lies.

‘Forbes’ accusation that Kylie and her accountants ‘forged tax returns’ is unequivocally false and we are demanding that Forbes immediately and publicly retract that and other statements. 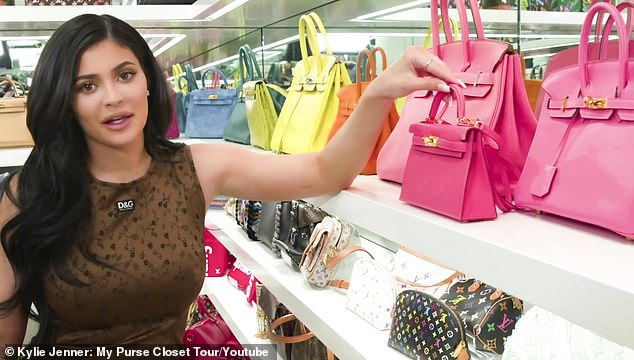 Life of luxury: The E! star is pictured with her collection of handbags including numerous Birkins which cost between $40,000 to $500,000 each 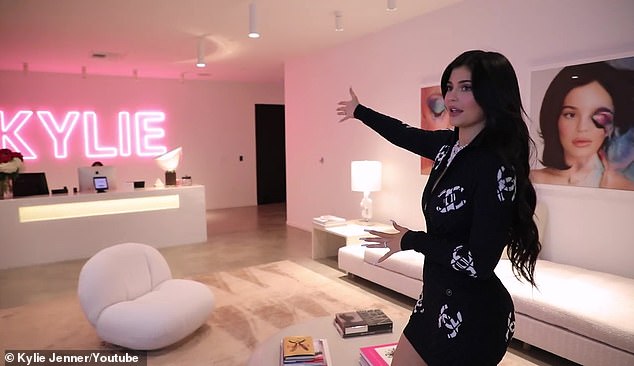 Bombshell report: Forbes published a scathing article in which they claimed Kylie is not a billionaire, and accused her of spinning a ‘web of lies’ about her business including her Kylie Cosmetics brand

‘It is sad that, of all things, Forbes has devoted three reporters to investigate the effect of the coronavirus crisis on Kylie’s net worth. We would not expect that from a supermarket tabloid, much less from Forbes.’

Earlier this week, the Keeping Up with the Kardashians star took to social media to slam the publication for making ‘unproven assumptions’.

She fumed on Twitter: ‘what am i even waking up to. i thought this was a reputable site.. all i see are a number of inaccurate statements and unproven assumptions lol. i’ve never asked for any title or tried to lie my way there EVER. period … ‘”even creating tax returns that were likely forged” that’s your proof? “so you just THOUGHT they were forged? like actually what am i reading.’

Jenner made a record-breaking $15million purchase on 5 acres of land in Hidden Hills in May 2020.

She is not the only A-lister who has purchased the property as Miley Cyrus had bought it in 2015 as her horses lived there but never built a home on it as she sold it three years later. 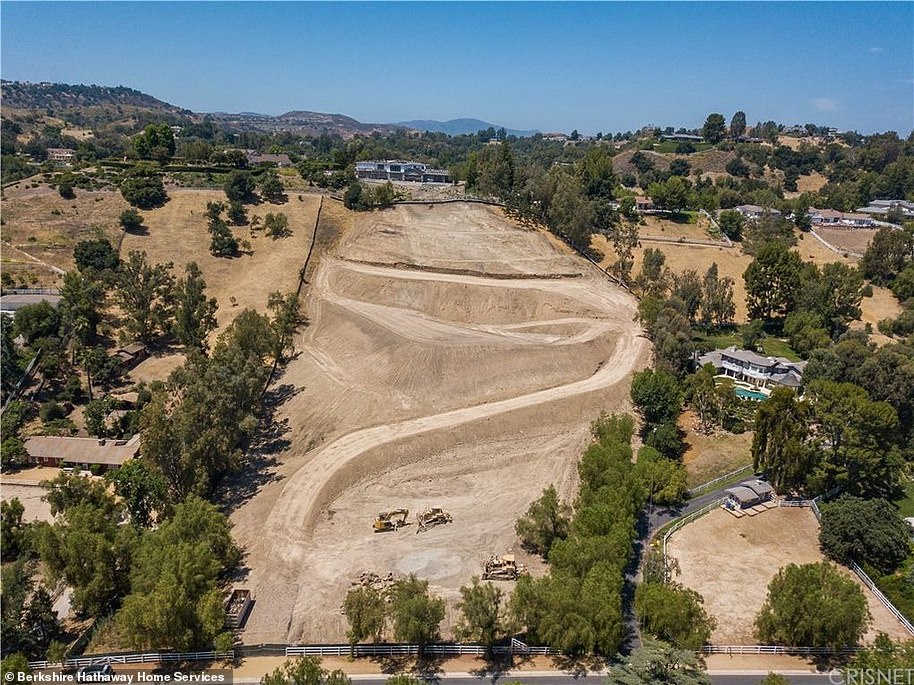 Wow factor: Jenner made a record-breaking $15million purchase on 5 acres of land in Hidden Hills in May 2020

The property was originally listed at $45million, meaning Jenner got a discount. 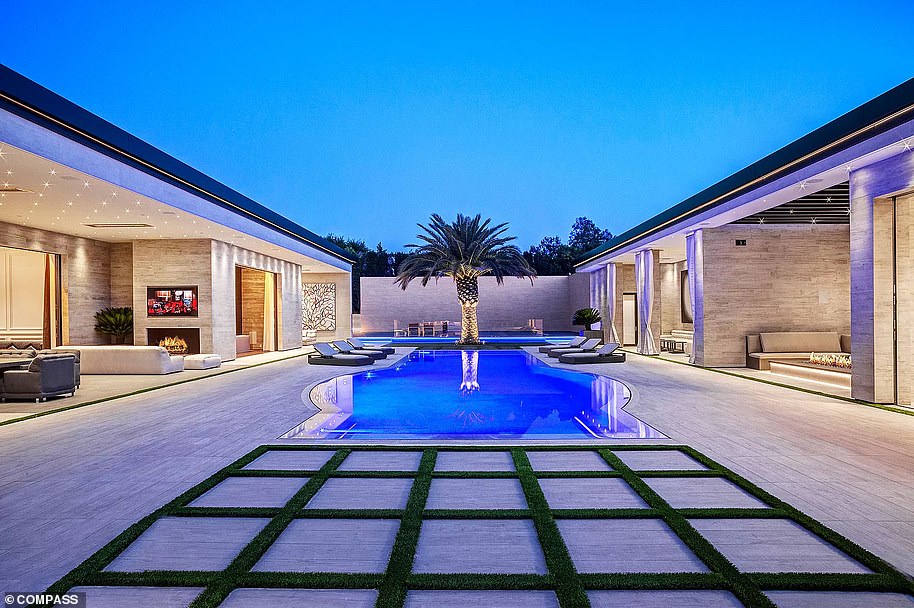 Fit for a billionaire! Kylie snapped up a $36.5million ‘resort compound’ in LA’s Holmby Hills neighborhood in April 2020. It was originally listed at $45million

Kylie snagged her current home in 2016, meaning she’s been there longer than any of her other abodes. The 13,200 square feet property is nestled on 1.4 acres of land.

Though she just bought a new place, it doesn’t look like she has plans to sell anytime soon, as the home is not listed anywhere. 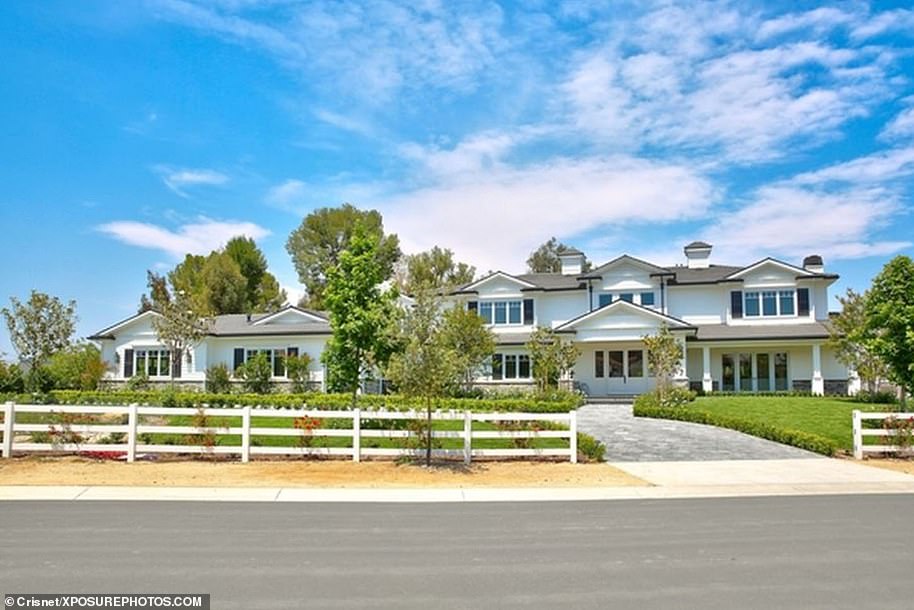 Current spot: Jenner’s current home is a $12million Hidden Hills mansion that sits on a 1.4acre plot of land

Kylie and Travis decided to pick up their LA home  in 2018 as an investment, but did stay their with daughter Stormi briefly.

Talking about the home to People, a source said: ‘Kylie and Travis’s new Beverly Hills house is spectacular. It’s contemporary, but very warm at the same time. The property is also very private.’ 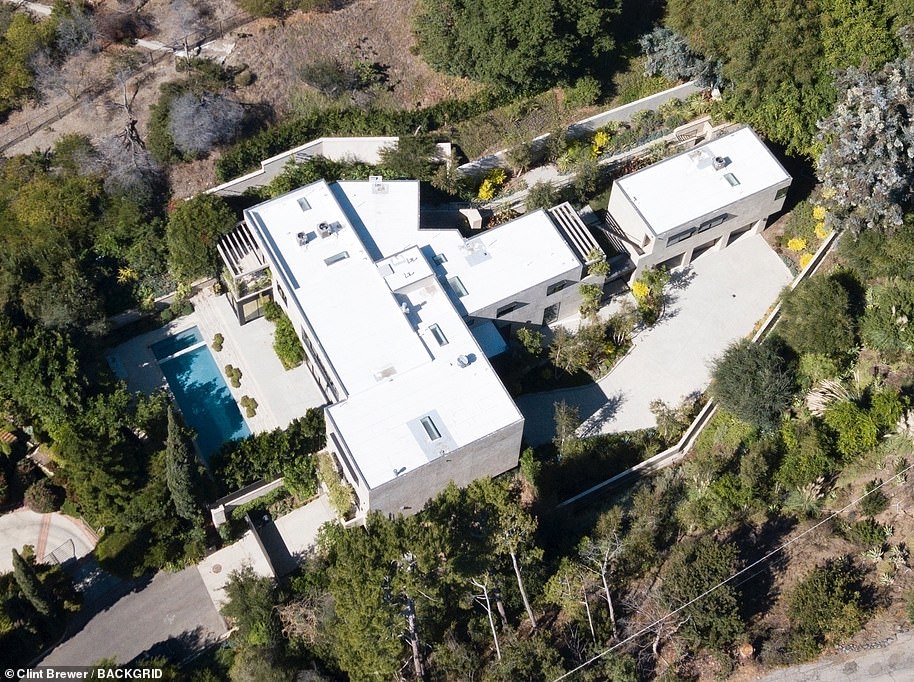 Jenner picked up her first home while just 17-years-old in 2015. She chose the location because it was close to sisters Khloe and Kourtney Kardashian. It’s reported that she dig extensive renovations in order to satisfy her ‘edgy’ tastes.

When the house sold to entrepreneur Nikki Eslami in 2017, Kylie is said to have made a $500k profit. 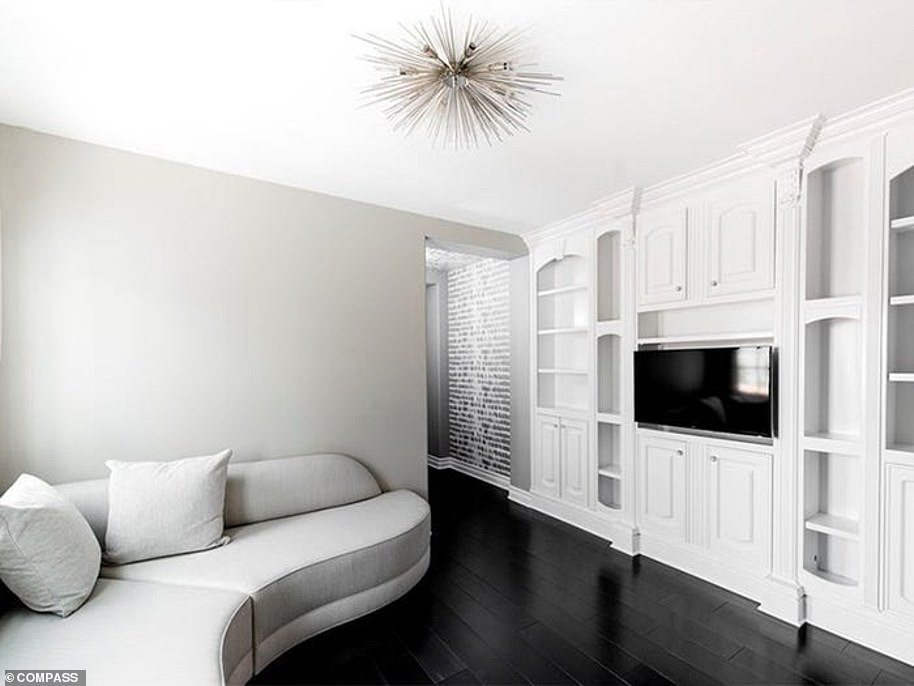 First timer: Kylie first home was a $2.7million Calabasas spot which she bought at just 17. She made a $500k profit when she sold it two years later in 2017

Kylie upgraded in 2016, purchasing a space that was nearly 2000 square feet bigger than her previous digs. It was reportedly home to six bedrooms, seven bathrooms, a home theater, and a four-car garage with epoxy floors.

Jenner sold the spot in 2018 and though it was a private sale, it’s reported she made $1million in profit. 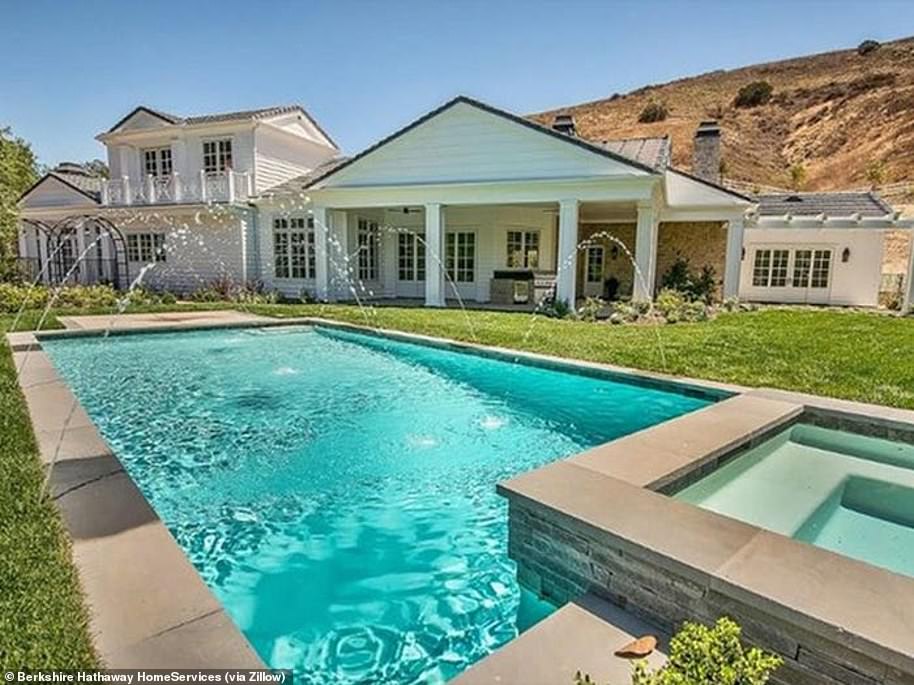 Leveling up: Kylie upgraded in 2016, purchasing a $6million space that was nearly 2000 square feet bigger than her previous digs

Jenner decided to become her own neighbor just three months later, picking up the pad immediately next door. Her plan was to make the space into a home office but she  put the house on the market just five months later.

It sold to to hockey player John Schiavo in 2017 for about $750k more than she bought it for. 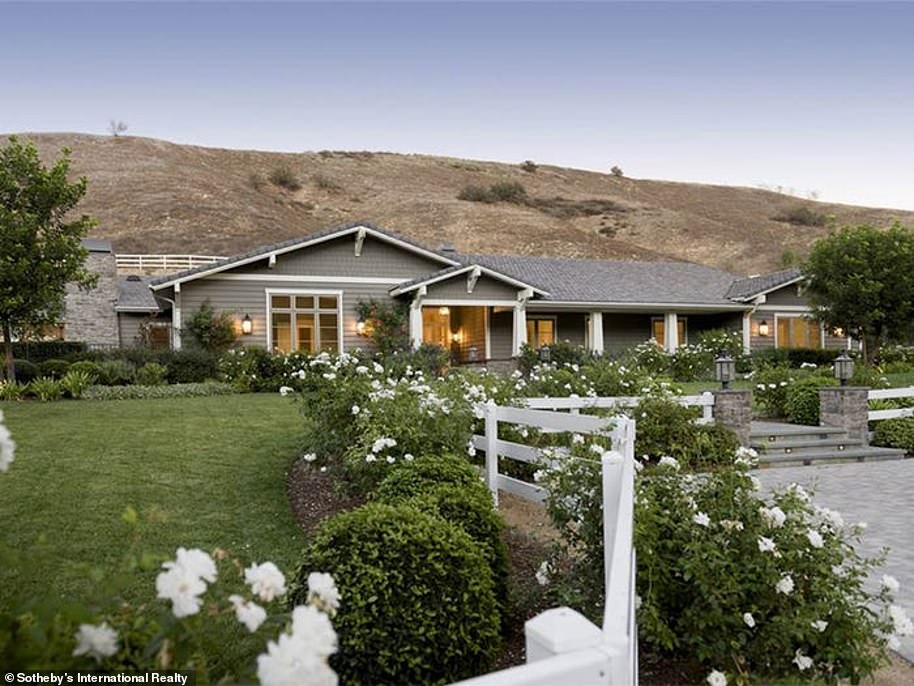 Jenner decided to become her own neighbor when she purchased a $4.5million ‘office home’ right next door

Jenner originally purchased this vacant piece of land in 2017 with plans to make a garden and horse farm but things never came to fruition.

But she decided to ditch the plot about 10-months later, still making a profit as she offloaded the undeveloped land for $5.35million the following August. 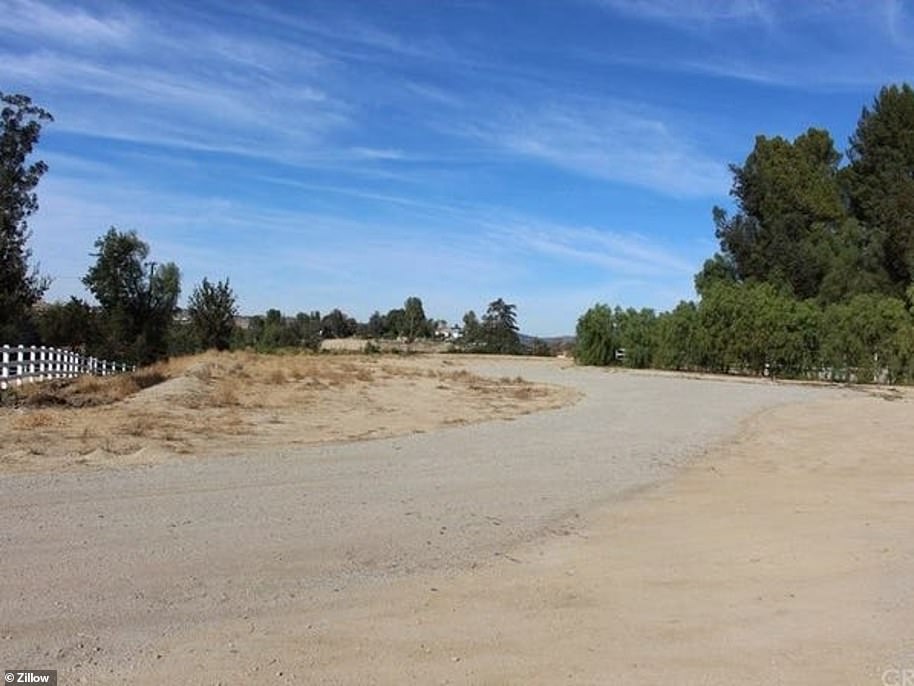 A lot of nothing: Bought in 2017, Kylie originally planned to make a garden and horse farm but she offloaded to $5million plot for a $350k profit a little more than a year later