He rarely shares snaps with his eldest child, Prince.

And Tristan Thompson made sure to mark his son’s fourth birthday with a sweet post on Instagram on Sunday, saying he’s ‘so lucky’ to be the youngster’s dad.

The basketball player, 29, who is dating Khloe Kardashian, also gushed that their little girl True, 2, is ‘lucky to have a big brother like you to watch and protect her’.

Sweet: Tristan Thompson marked his son Prince’s fourth birthday with an adorable post on Instagram on Sunday, saying he’s ‘so lucky’ to be the youngster’s dad

Tristan shared three adorable images to mark Prince’s birthday, with two of the snaps showing father and son laughing as they played chess together.

Alongside the images, Tristan penned: ‘Happy birthday Princey!!! I’m soo lucky to have you as a son papa. Your heart and soul is pure gold.

‘Your sister is soo lucky to have a big brother like you to watch and protect her. Daddy Loves you baby boy.’

Tristan shares his son with ex-girlfriend and model Jordan Craig, 29, and rarely posts images of the little boy to his Instagram account. 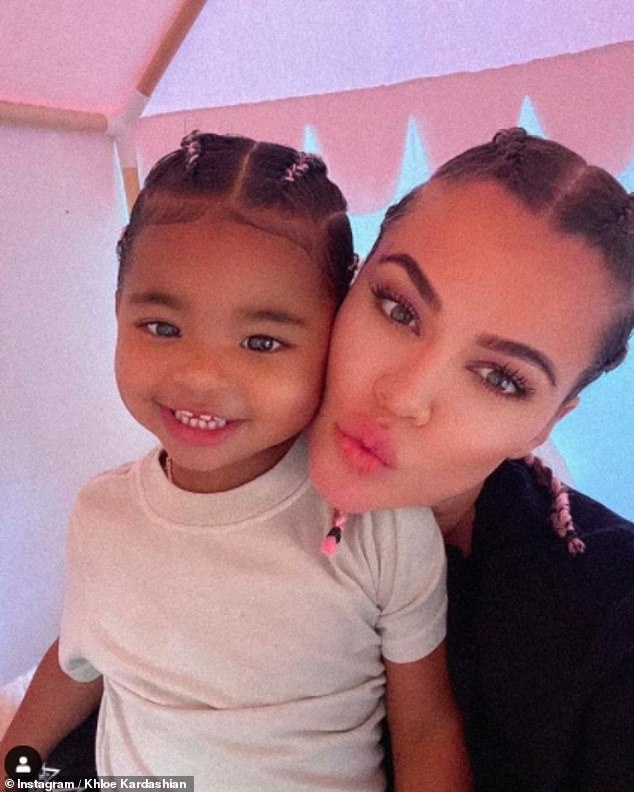 Family: The basketball player also gushed that his daughter True, who he shares with Khloe Kardashain, ‘is soo lucky to have a big brother like you’ in the post (Khloe and True pictured)

He was also revealed to have cheated on Khloe in 2018, with the news breaking just two days before Khloe gave birth to their daughter.

Dailymail.com published images at the time of Tristan getting close to a woman at New York nightclub as well as old surveillance footage of him and two women at a lounge in Washington DC.

However the duo worked on their relationship and didn’t break up until February 2019, when Tristan was caught kissing Jordyn at his home after a party. 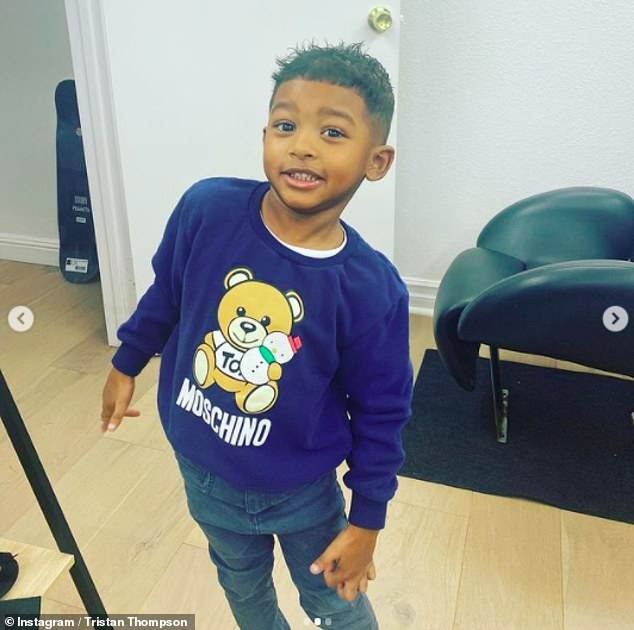 Happy birthday! Tristan shares his son with ex-girlfriend and model Jordan Craig, 29, but rarely posts images of the little boy 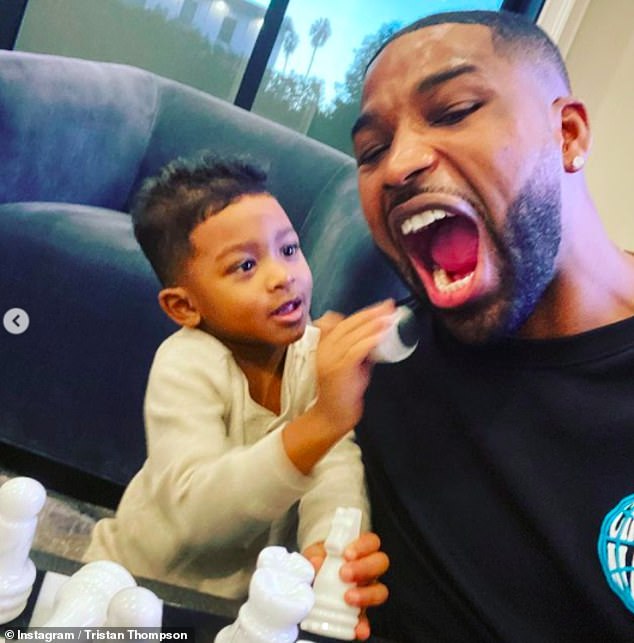 Father and son: The duo appeared to be having fun in the snaps which showed them playing with a chess set 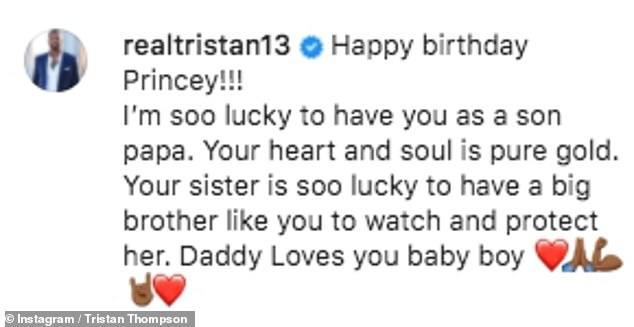 Tristan penned: ‘I’m soo lucky to have you as a son papa. Your heart and soul is pure gold’

Khloe and Tristan first began dating in September 2016 following her divorce from Lamar Odom and she moved to Cleveland to live with NBA player in December 2017 after announcing her pregnancy.

The birthday celebrations come after Khloe revealed that she and True had been sent a care package from NBA team Boston Celtics, who Tristan has recently signed a $19M two-year deal with.

The 36-year-old reality TV icon posted an Insta Stories of the gift basket, which was made out to her and her beloved toddler.

‘Welcome to the team!’ read the card. ‘We wanted to make sure we got you both a starter pack of gear before the season starts. Stay healthy and go green!’ 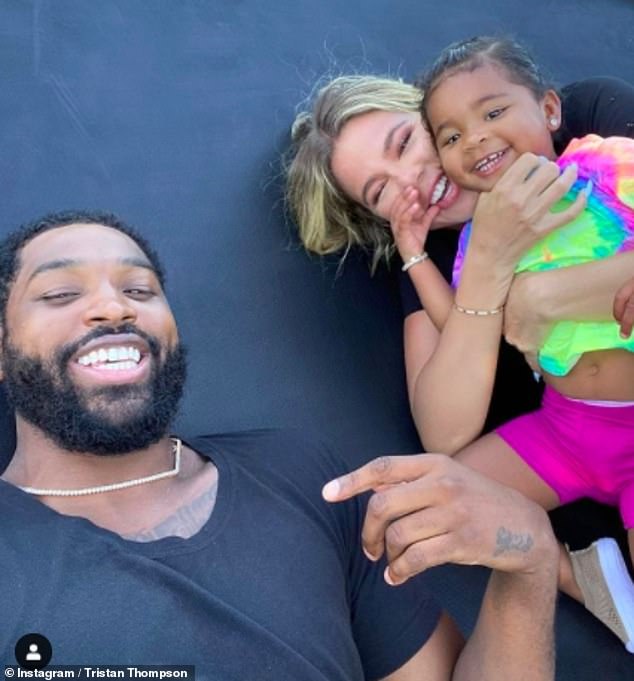 Together: Khloe and Tristan reconciled earlier this year (pictured with their daughter True)

‘Thank you so much @celtics !!’ Khloe gushed on her Insta Stories. ‘So sweet of you to include True and I !!! Go green’.

Goodies in the care package included knit beanies, T-shirts, thermoses and even a cute little teddy bear in a Celtics jersey.

Previously the NBA love rat has played for the Cleveland Cavaliers and was part of that team when he and Khloe first became an item. 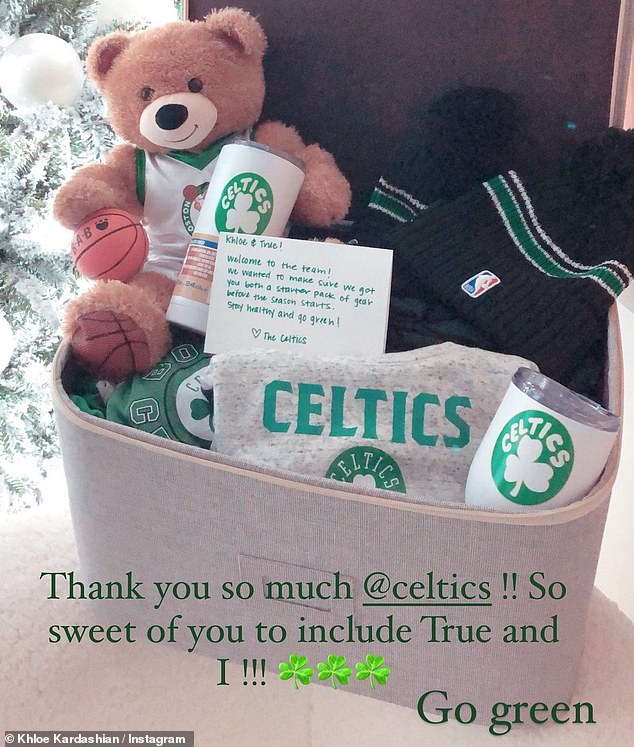 So sweet: It comes after Khloe revealed she had been sent a care package from the Boston Celtics after Tristan signed a $19M two-year deal with the team