They had a romantic backyard date night over the weekend while celebrating a friend’s wedding.

And Kim Kardashian and Kanye West continued to work on strengthening their marriage on Monday as they enjoyed another night to themselves.

Kanye, 43, revealed that he and his 39-year-old wife were dining outside next to a massive tent structure in a tweet. 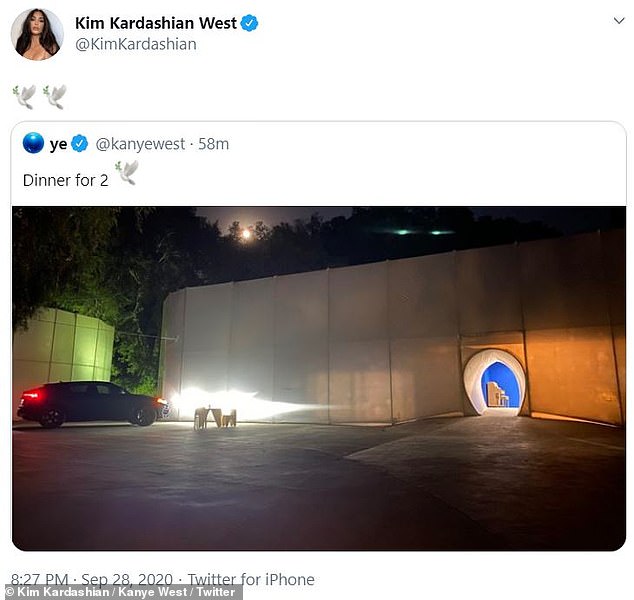 Lovebirds: Kim Kardashian, 39, and Kanye West, 43, tried to put rumors of their impending divorce on ice with a romantic dinner for two on Monday night

‘Dinner for 2,’ Kanye captioned his photo, while adding an emoji of a dove carrying an olive branch, possibly to signal he was taking steps to rekindle their romance following his travels without the family and his efforts to run a doomed presidential campaign.

The Monster rapper’s photo showed their car outside of a tent building at night, with a small table featuring two chairs arranged just outside by the vehicle.

He didn’t make clear what the building or another tent-like structure next to it were supposed to be, but a round entranceway revealed the interior was painted a shade of royal blue and showed an upright piano, possible to serenade his wife with. 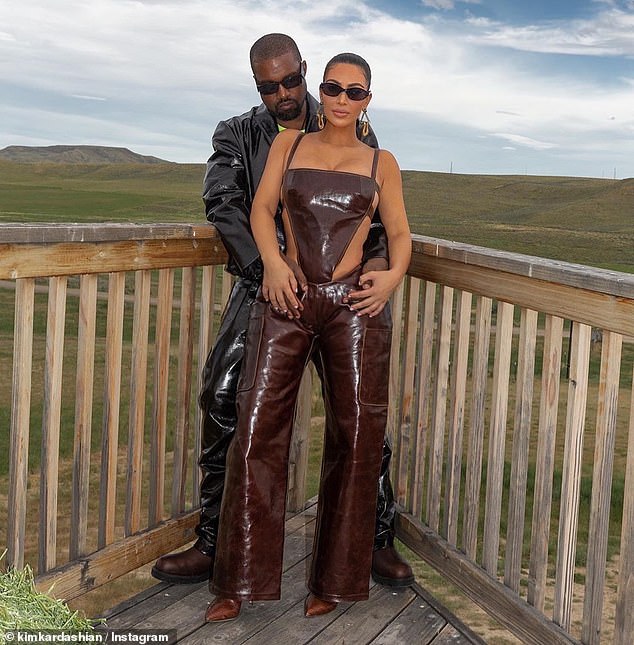 Getting closer: Kanye tweeted a photo of a small table outside a tent structure and wrote, ‘Dinner for 2’ with a dove carrying an olive branch emoji. Kim retweeted it with two doves 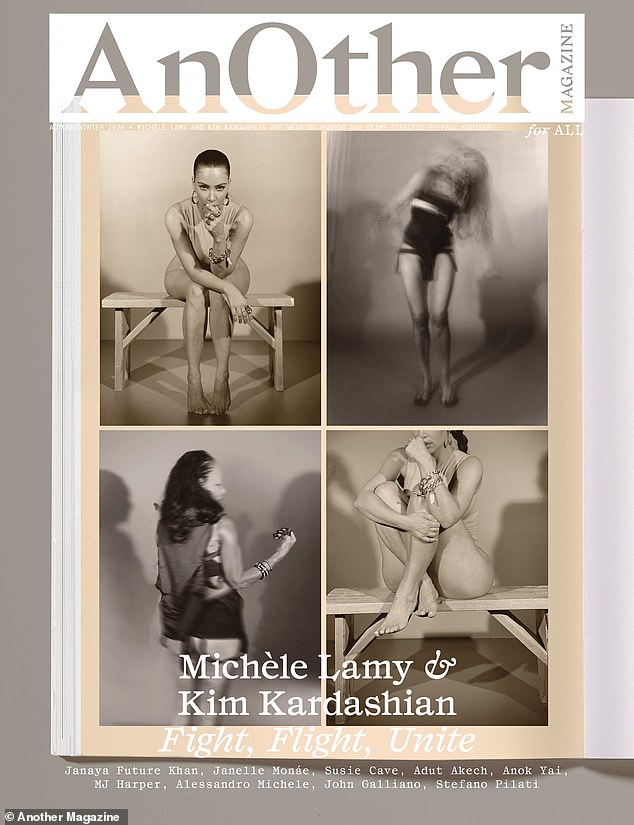 Stunning: Earlier in the day, Kim revealed the gorgeous black and white photos that her husband took of her for the UK-based AnOther Magazine

Kanye’s romantic gesture came after Kim shared some gorgeous black and white photos he had taken of her earlier in the day.

The images, which were for the UK-based publication AnOther Magazine, showed the Keeping Up With The Kardashians star in a set of underwear, possibly her own Skims, and jewelry designed by her friend Michèle Lamy.

Lamy was also featured in stylish black and white photos in which she modeled Kim’s Skims shapewear.

Although Kanye was behind the camera, the Dutch photographer Kooiker provided instructions to the rapper on how to shoot Kim. 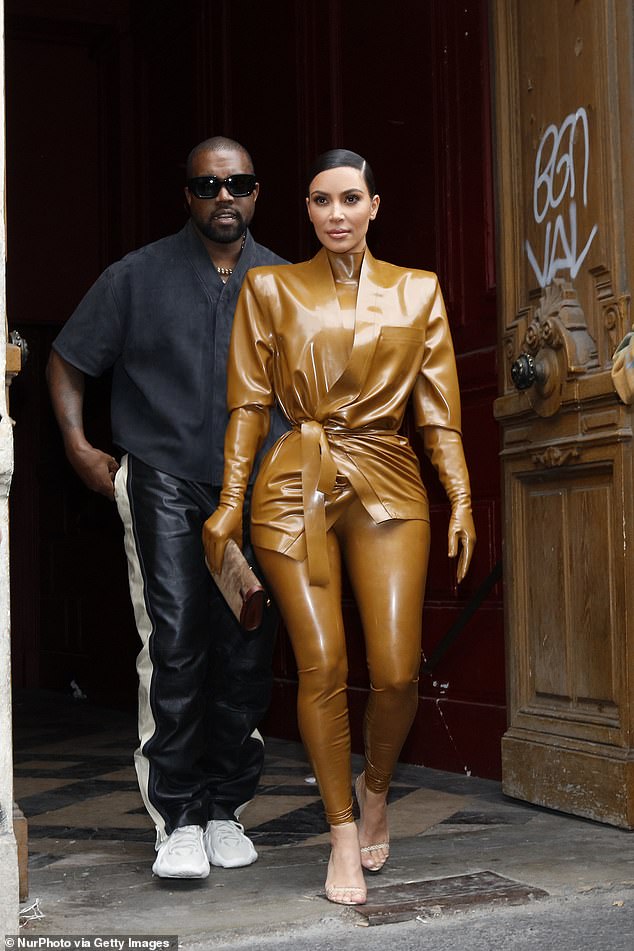 Troubled waters: Kim’s newest date night with her husband follows reports that she’s ‘sad’ that he has been struggling with his mental health, which a source said she attributed to his time ‘being isolated’; shown in March 2020

Kim’s newest date night with her husband follows reports that she’s ‘sad’ that he has been struggling with his mental health.

The reality star is reportedly worried about the ‘vicious cycle’ her husband is experiencing, after a series of bizarre Twitter rants.

A source said: ‘She is deeply disappointed and sad because Kanye is struggling. It’s a vicious cycle that Kim has had success at interrupting successfully for months at a time.’

An insider added to Us Weekly magazine: ‘Being isolated and alone essentially in his head isn’t healthy for Kanye … She doesn’t care about the tweets, that is Kanye being Kanye. The mood swings and the manic episodes that are extremely difficult for Kim to help Kanye cope with.’ 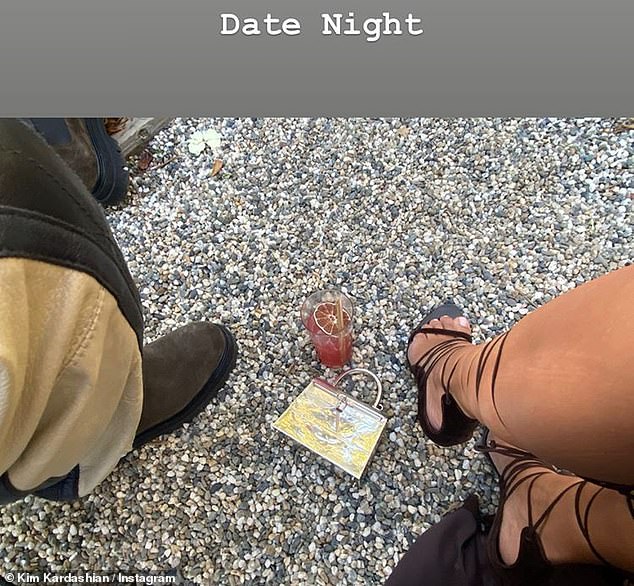 Date night: Kim Kardashian shut down rumors of an impending divorce on Saturday, as the pair reunited to attend their friends’ outdoor wedding 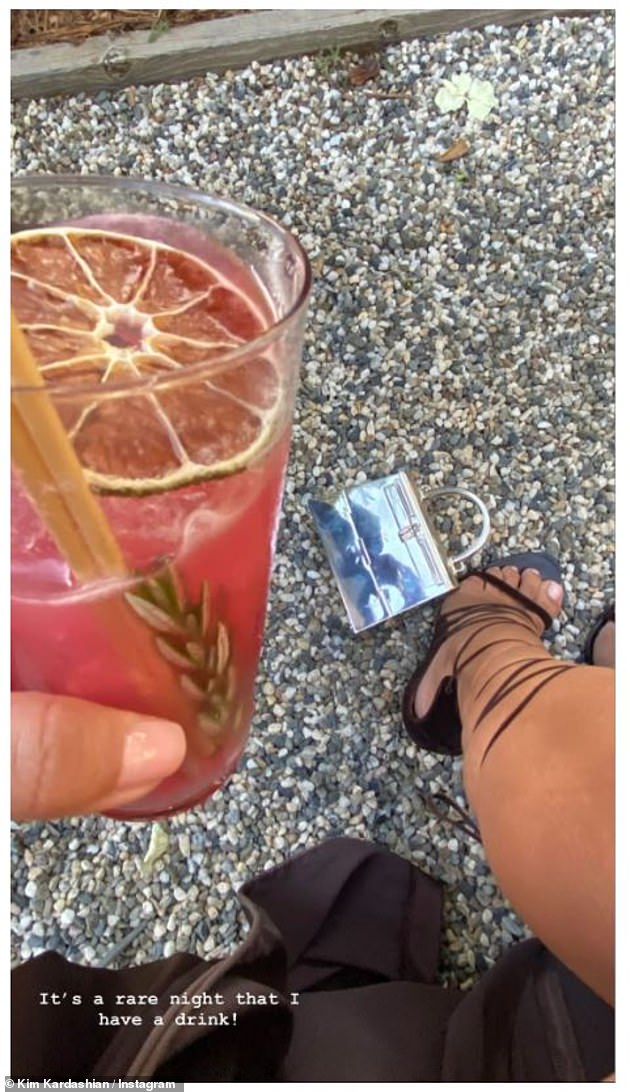 Letting loose: ‘It’s a rare night that I have a drink,’ wrote Kardashian as she documented the entire celebration

On Saturday, Kim posted about the couple’s ‘Date Night’ on her Insta Stories to assuage concerns that their marriage was on the rocks.

She also caught a glimpse of Kanye’s tan and black leather pants and his brown leather boots while she enjoyed a cocktail in their spacious back yard.

‘It’s a rare night that I have a drink,’ wrote Kardashian as she documented the entire celebration.

Later, she posted a photo of a mostly empty wine glass, writing, ‘Guess I need it!’ 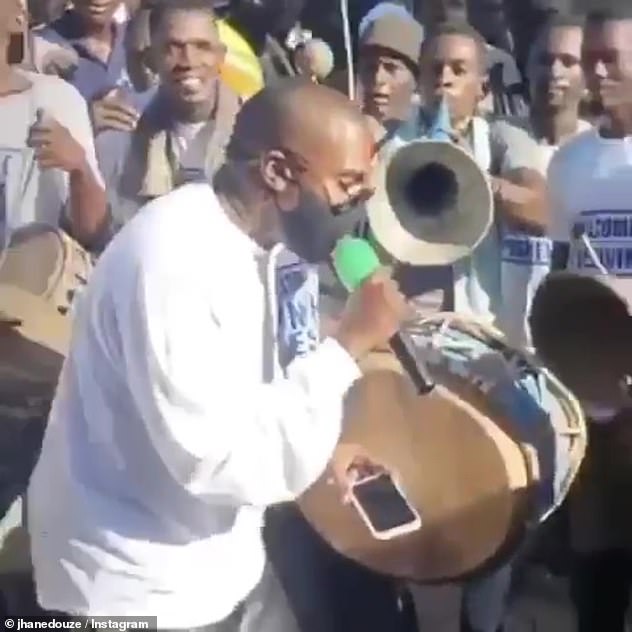 In the spirit: Kanye had recently arrived back in Southern California following recent trips to Jamaica and Haiti. He was seen rapping with Haitian drummers on Friday 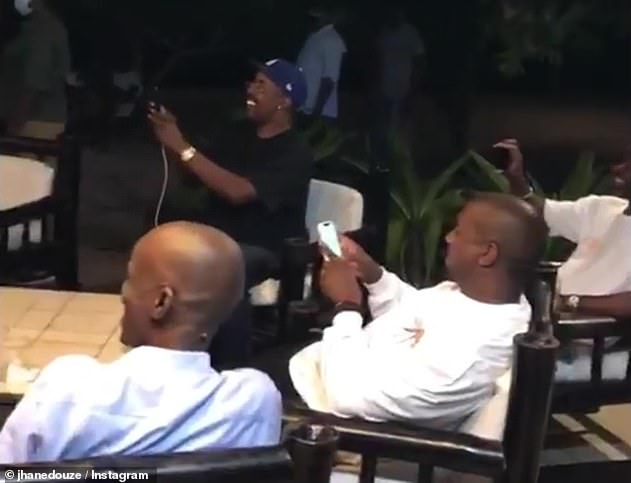 Welcomed: Videos posted by fans showed the rapper on Friday as he took in the music and dance celebration, before joining in the dancing

Kanye had recently arrived back in Southern California following recent trips to Jamaica and Haiti.

Videos posted by fans showed the rapper on Friday as he took in the music and dance celebration, before joining in the dancing.

Another video showed him rapping from behind a mask while local Haitians played drums and flutes.

The Monster rapper didn’t mention his reasons for visiting Haiti, but he did share twitter posts on Saturday indicating he was interested in the country because of its history of overthrowing French colonialists.

‘Haiti is where our people started the first revolution that freed us from slavery,’ he wrote in one tweet that included a paint of Haitians battling the French. 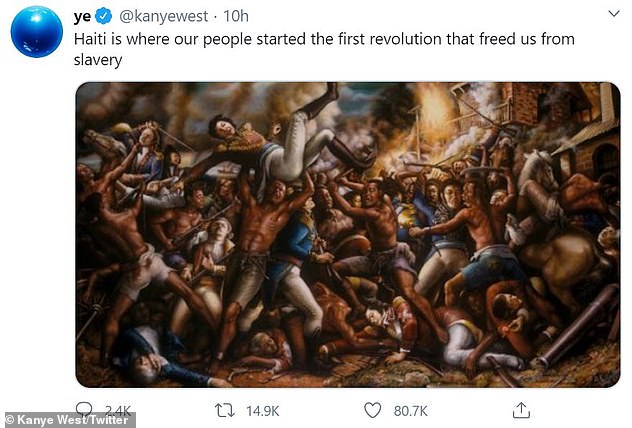 Freedom: The rapper didn’t mention his reasons for visiting Haiti, but he shared twitter posts on Saturday indicating he was interested in its history of overthrowing French colonialists