She’s known for garnering attention on social media with her revealing posts, but on Friday, Kim Kardashian was also trying to raise awareness.

The 39-year-old reality star struck a sultry pose in a tight-fitting leather ensemble, while asking her 179 million Instagram followers to support Armenia amid conflicts and unrest on the Armenian-Azerbaijani border.

Kim – who is Armenian descent – started off her post by comparing her outfit to the Armenian flag, with her red hair, yellow ensemble, but said she was missing the color blue, telling followers: ‘For those of you that may not be aware of what is happening in Armenia right now I would like to share so you can all help!’ 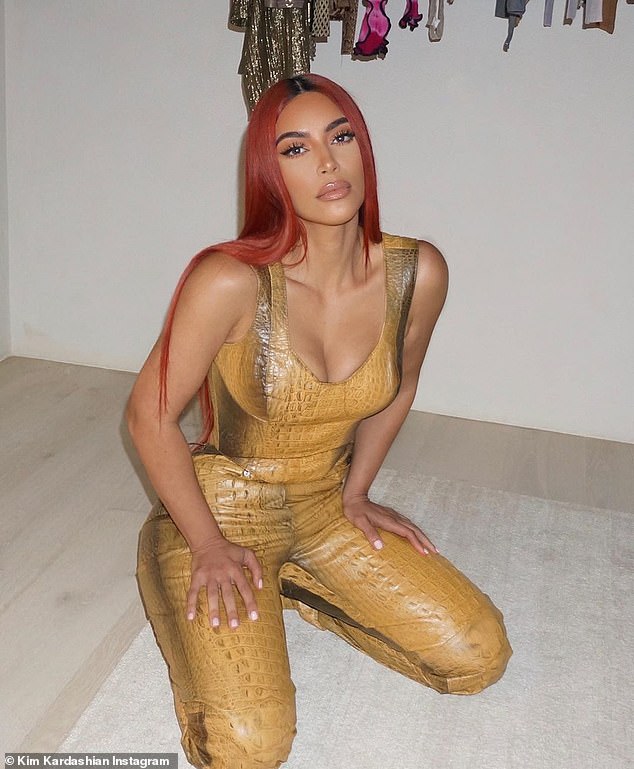 Global diplomacy: Kim Kardashian West has urged her fans to support Armenia amid conflict in the country… after posting an eye-catching shot of herself on Instagram Friday

‘Despite an ongoing global pandemic, Azerbaijan has violated the UN’s appeal for global ceasefire by unprovoked attacks against the Republic of Armenia,’ Kim explained in her post.

She added: ‘Civilian structures in Armenia have been targeted, and Azerbaijan has now threatened to bomb the nuclear power plant in Armenia.’

‘The international community needs to pay attention and intervene now with such political and diplomatic measures to prevent unnecessary escalation and the loss of human life.’ 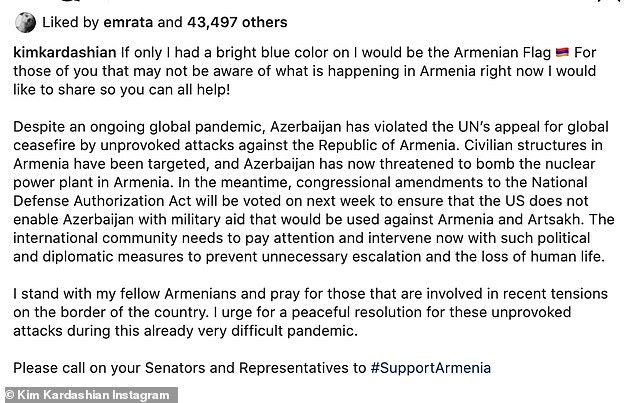 Getting her message out: Kim, 39, took time to explain the current struggles of the Armenian people

The wife of Kanye West concluded: ‘I stand with my fellow Armenians and pray for those that are involved in recent tensions on the border of the country. I urge for a peaceful resolution for these unprovoked attacks during this already very difficult pandemic.’

Kim recently endorsed husband Kanye after he formally announced he is running for president this year in a challenge to Trump.

Meanwhile, the budding law student, who is studying to take the bar in California, baptized her three youngest children in Armenia last year. 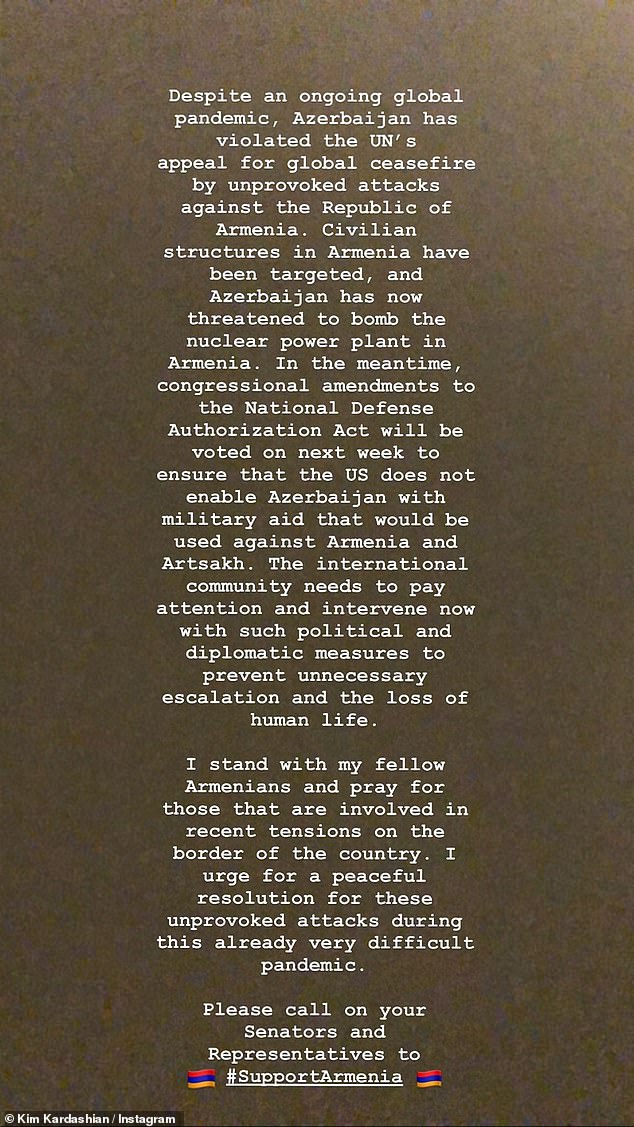 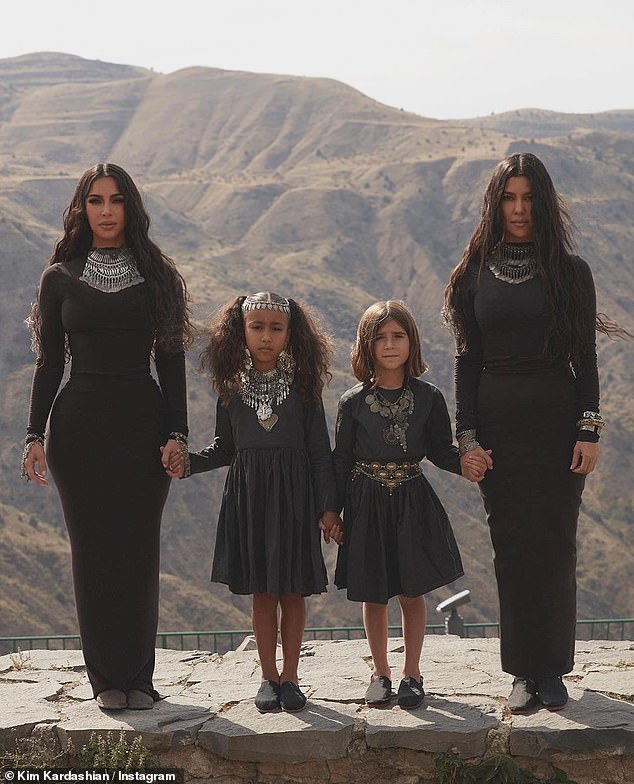 Homeland: The budding law student, who is studying to take the bar in California, baptized her three youngest children in Armenia last year

In October, she praised news that the US House of Representatives passed a resolution to recognize the Armenian Genocide of 1915.

‘Yesterday was such a huge victory for the Armenian people when the US House Of Representatives acknowledged the Armenian Genocide!’ the E! star wrote.

‘This photo was taken of me and my children this month in Armenia,’ she noted, in addition to crediting the photographer, Jackie Nickerson. 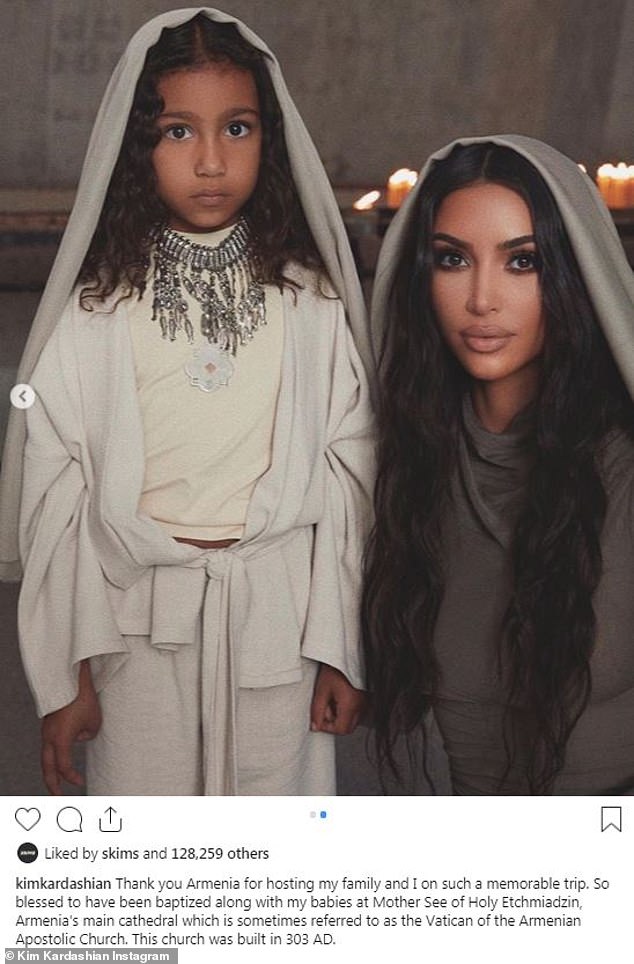