Kim Kardashian has shared photos from her over-the-top 40th birthday bash, where she was treated to the same BMW she received on her sweet sixteen and special memories from past parties.

Kim’s family surprised her on her big day by recreating many of her childhood birthday parties, starting from age one when she celebrated her special day with ponies.

While the party was all shown on the E! special celebrating Kim’s birthday, these new photos posted Friday provide another intimate look at her special day. 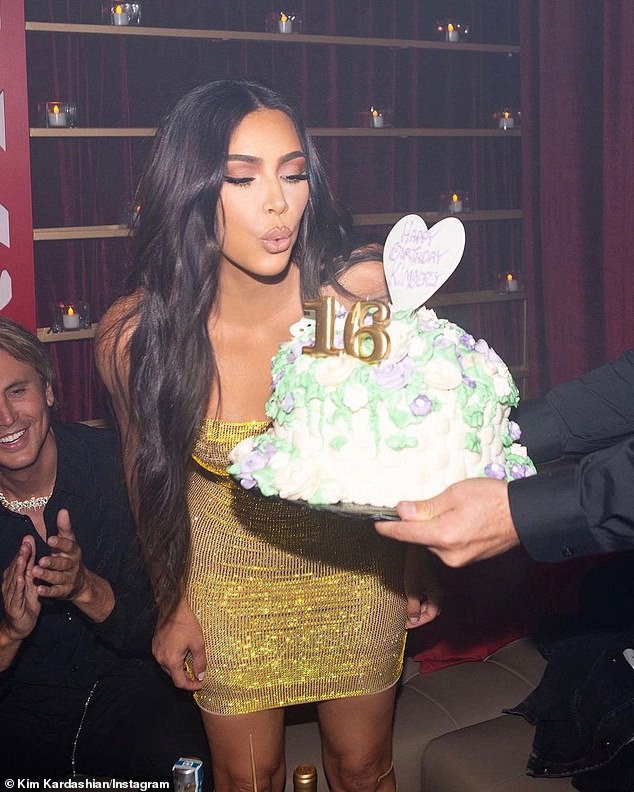 The fun all started at age one, where Kim was wished a happy birthday to a recording of her late father Robert Kardashian.

Kim’s sisters got involved for her 10th birthday, where they recreated the same dance they treated her to at her bash in 1990.

The girls wore black leotards and bows around their necks as they did the can-can, while Kourtney sat on a chair holding a cane.

Kim’s 16th birthday was particularly noteworthy, with the star given the original white BMW she was bestowed back in 1996. 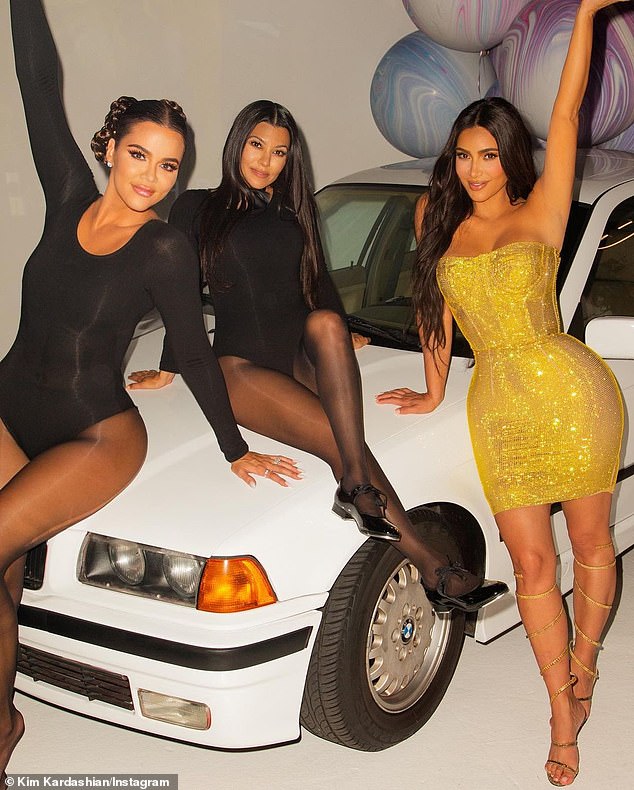 Start your engines! Kim and her sisters Khloe and Kourtney posed with the BMW she received on her 16th birthday 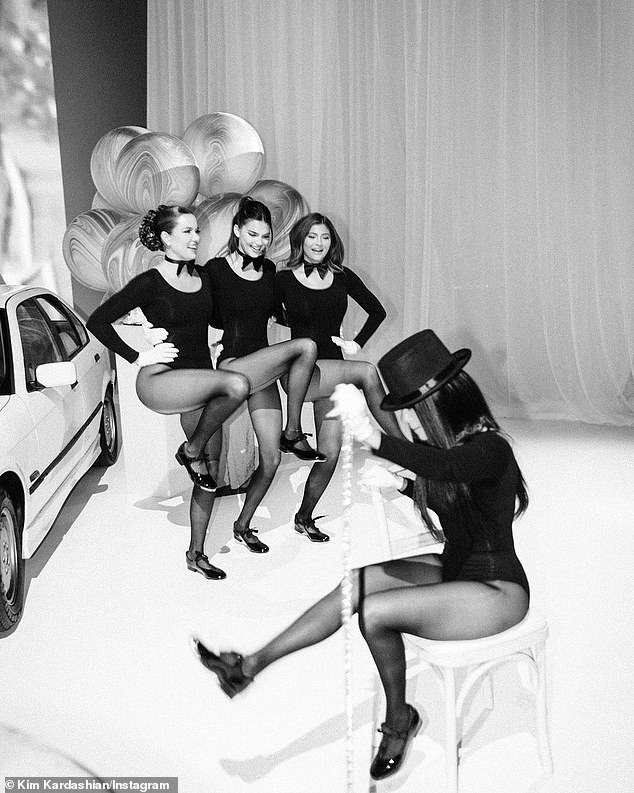 Can you do the can-can? The girls wore black leotards as they recreated the same dance featured at Kim’s 10th birthday 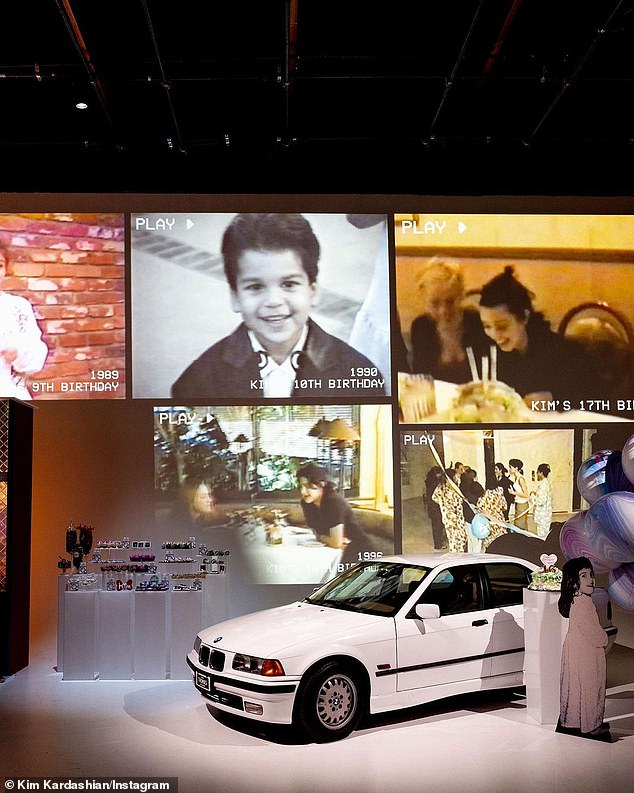 Reliving the memories: One room was decked out with home recordings made by Kim’s late father Robert Kardashian

Kim posed by the vintage car with Khloe and Kourtney, and squealed with delight as she jumped back into her very first car.

The family even re-created the famous club Tao, where Kim celebrated her birthdays during her 20s and 30s.

The birthday girl, her husband Kanye West, and friends posed on the ‘Tao red carpet’. 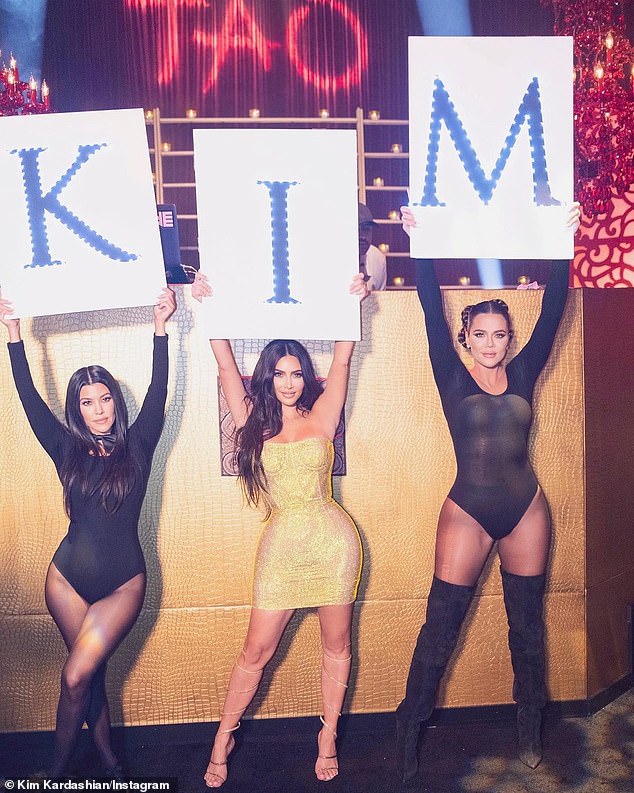 Club Kim: Khloe and Kourtney turned into Tao girls as they greeted the star with a ‘KIM’ sign 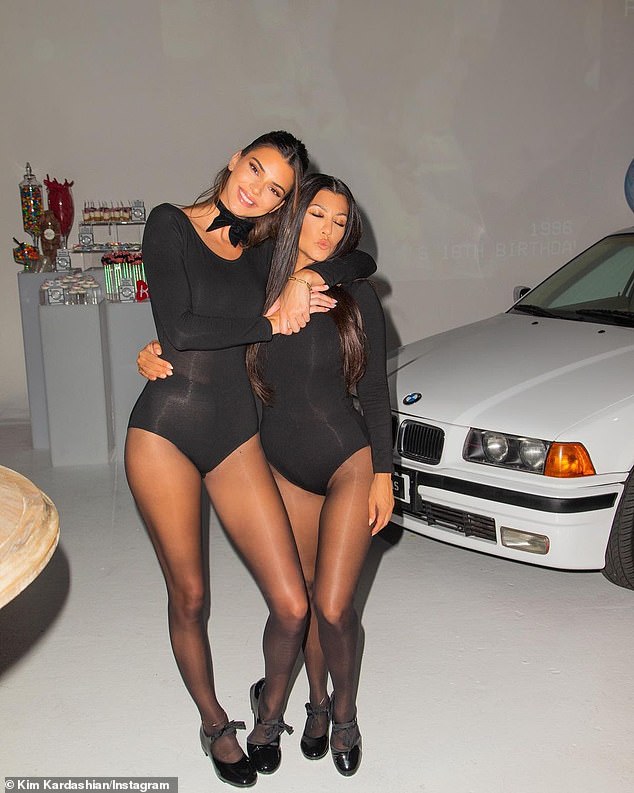 Sister act! Kendall and Kourtney wearing the black leotards they danced for Kim in 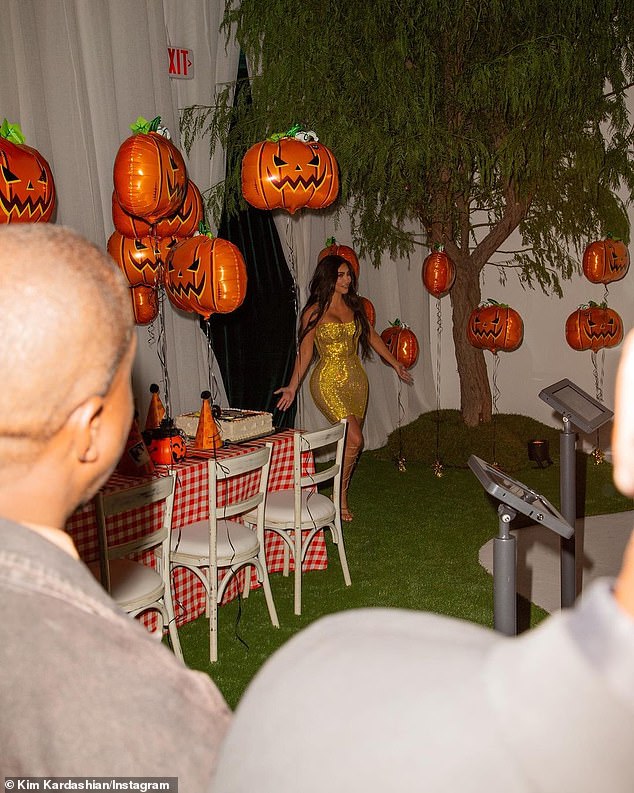 Boo! With the star’s birthday being so close to Halloween, one of the rooms was decked out in jack-o-lantern decor

One of the rooms featured home videos of Kim’s birthday over the years, recorded by her late father.

From the birthday cakes to the vintage white BMW, her family spared no expense in making Kim’s special day an unforgettable one.

Kim thanked her friends and family for pulling off the party as she described exactly how it all went down in the caption.

‘All I can say is WOW! My mom and my sisters threw me the most epic surprise party that was so special in my heart. We showed it on E as a special so you guys got to see the behind the scenes of how it really went down. You know I’m a sentimental person and this party was the most special. 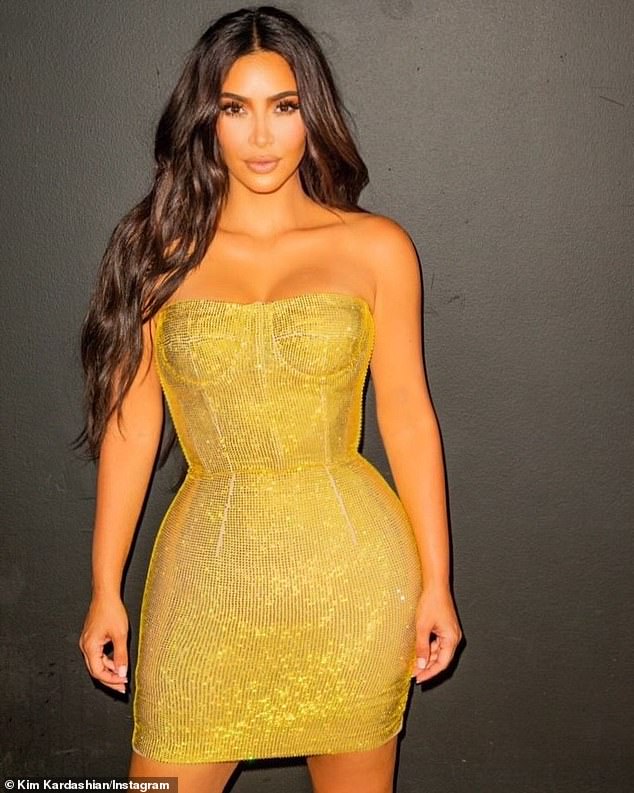 Golden girl: The star looked fabulous in a glittering mini dress that hugged her curves

Surprise! Originally Kim thought she was going to a photo shoot when she arrived at the bash 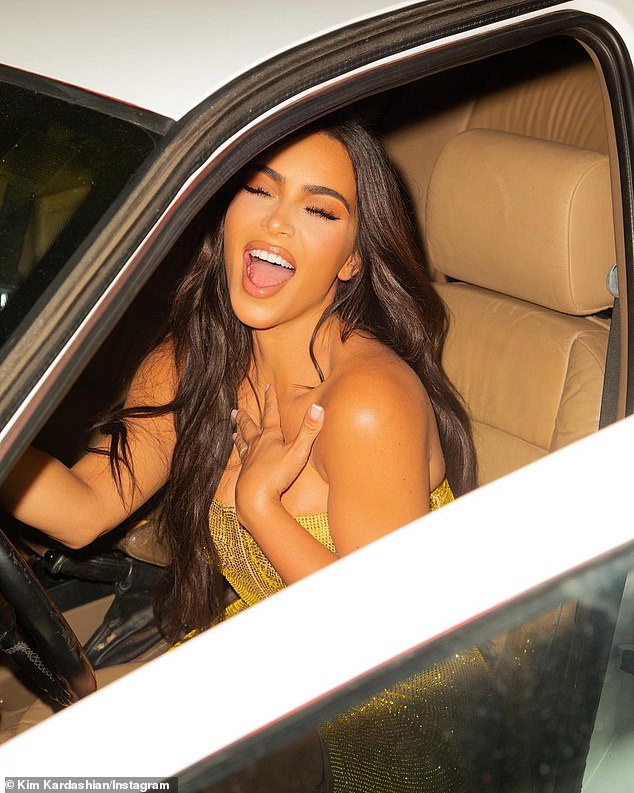 Driving in style! Kim squealed with delight as she got behind the car of her original BMW

‘They re-created all of my special birthdays throughout my life from looking at all of our old home videos. They re-created the party, The same balloons, the same cake, everything! My dad video taped and documented our whole lives so they showed each of the videos of my birthdays on a big screen behind the party.

‘I entered into the room that started off at my first birthday party with the same ponies and the same cake, and my dad wishing me a happy 1st birthday. Then as I entered in the room I ended up at my second birthday then my fourth birthday leading up to my 10th birthday where my sisters did the same exact dance that they did for me when I turned 10.

‘We then got to my 16th birthday party and my exact same car was there waiting for me with the same exact balloons with the same cake. After a while the curtains opened and the bottle service girls came out which happened to be my sisters and they re-created Tao night club, where I spent all of my 30s having my birthday parties. Each and every detail that went into this was so special and I am forever grateful to my family for taking the time to put this together to celebrate me turning 40. 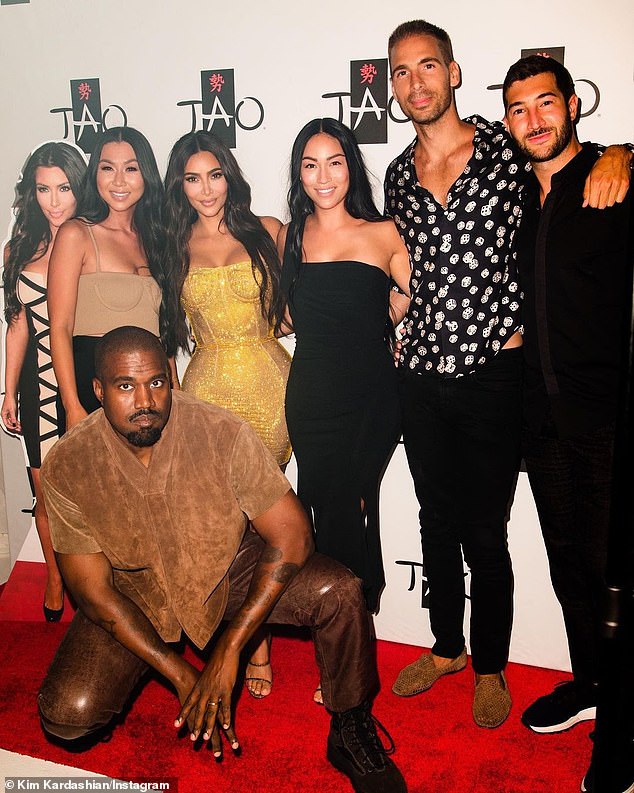 Strike a pose: The gang gathered around on the red carpet of the re-created Tao 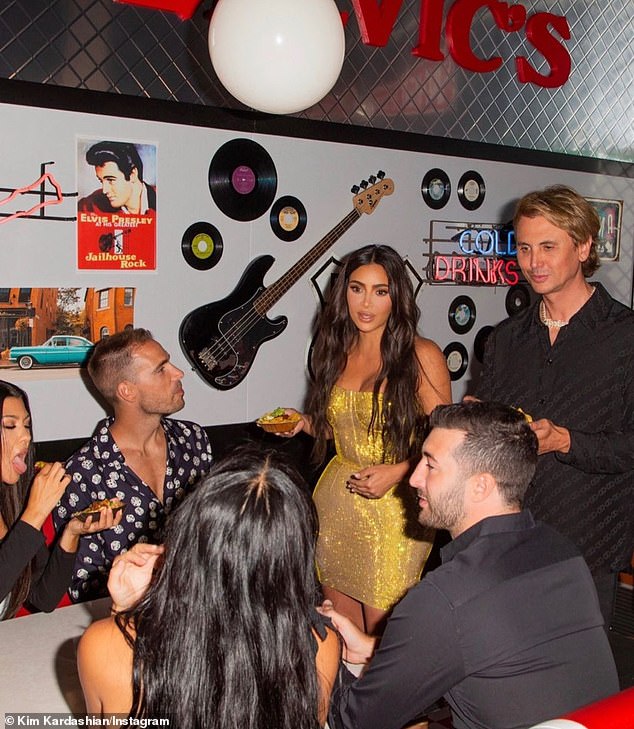 Dig in! The family recreated Kim’s eighth birthday at the diner Ed Debevic’s 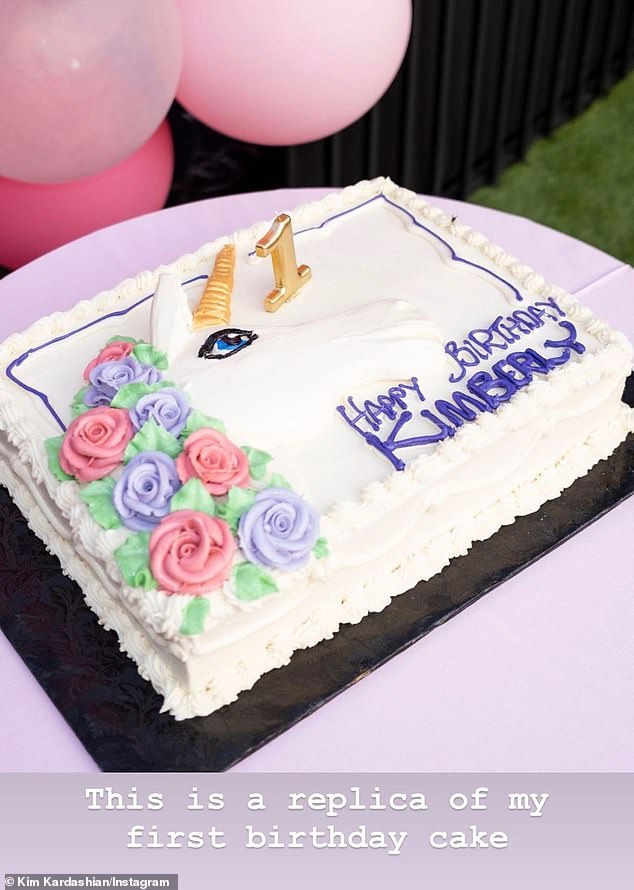 Aww! The star was even given a replica of her very first birthday cake, complete with white frosting and a unicorn decor

‘I can’t wait to share so many more birthday photos and videos with you guys soon and I thank each and everyone of you who reached out with birthday wishes ✨ Also shout of to @mindyweiss for putting this all together. You were there putting together all my birthday parties when I was a little girl so this definitely came full circle.’

Clearly touched by all the thought that went into the celebrations, Kim continued gushing about the bash on her Twitter page.

‘You know I’m a sentimental person and this party was the most special. They re-created all of my special birthdays throughout my life from looking at all of our old home videos. They re-created the party, The same balloons, the same cake, everything!’ she tweeted. 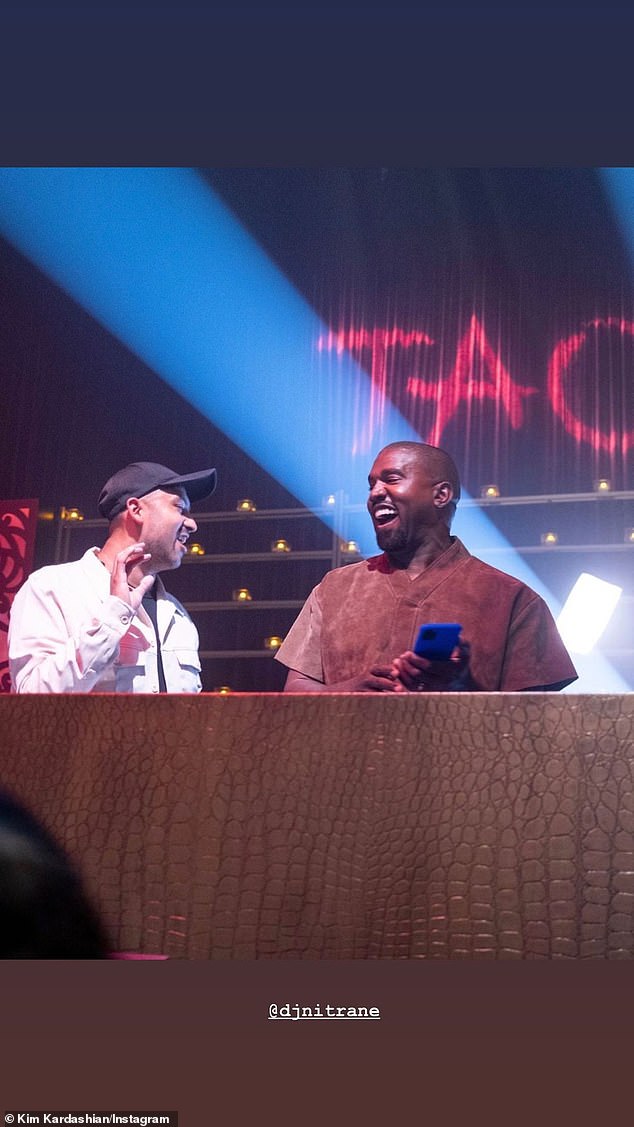 In the mix! Kanye West got behind the DJ booth with DJ Nitrane 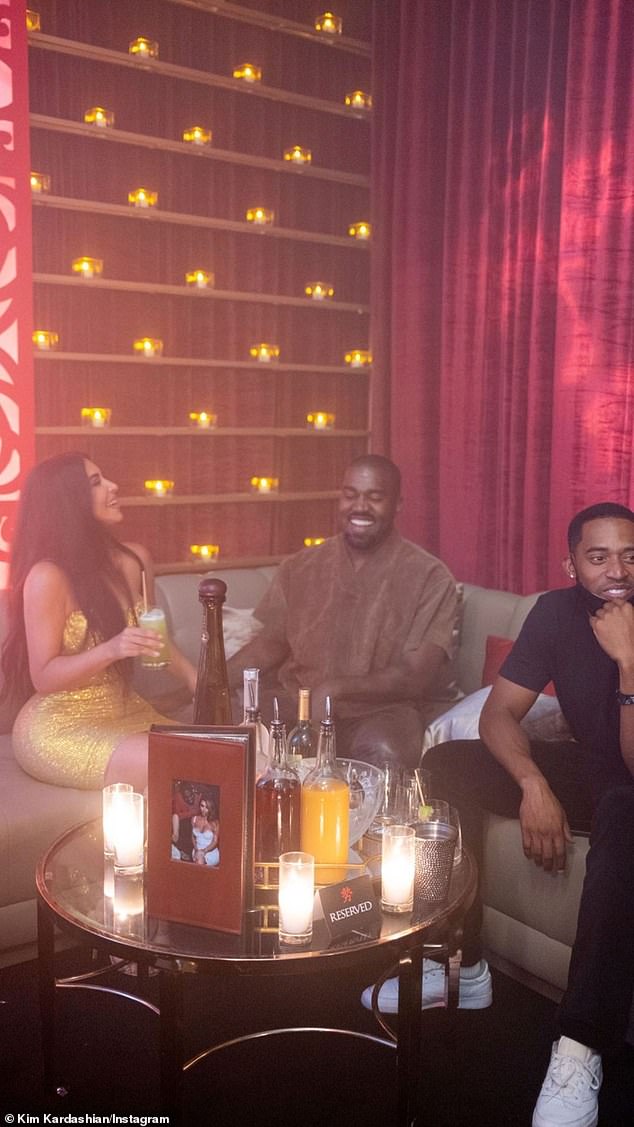 VIP: The couple enjoyed bottle service at their specially-reserved table 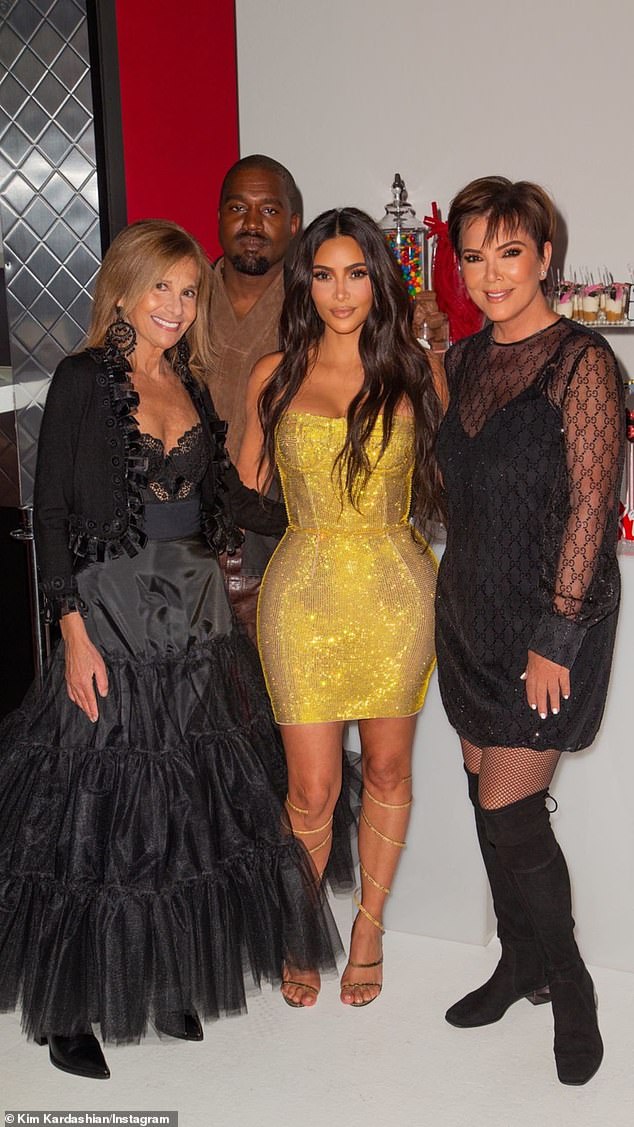 Strike a pose: The star celebrated her special day with friends and family