She previously revealed that the Spice Girls were once her ‘obsession,’ and it appears that Kim Kardashian West is still being influenced by the ’90s girl band today.

Kim, 39, shared a photo of herself on Thursday with her four sisters Kourtney and Khloe Kardashian, and Kendall and Kylie Jenner, simply captioning the post: ‘Spice Girls.’

The reality star was clearly feeling a resemblance between herself, Kourtney, 41, Khloe, 36, Kendall, 24, and Kylie, 22, and the fab five girls from the group: Victoria Beckham, Mel B, Emma Bunton, Geri Halliwell, and Mel C.

Wannabe: Kim, 39, shared a photo of herself and her four sisters Kourtney and Khloe Kardashian, and Kendall and Kylie Jenner on Thursday, simply captioning the post: ‘Spice Girls’

While it was slightly unclear exactly who was who, Kim appeared to be making a play to be Ginger Spice in her all-red ensemble. However, the post caught the attention of actual Spice Girl Victoria Beckham, who posted the snap to her stories asking which sister was Posh Spice.

Kim has made no secret of the fact that she’s been a huge fan of the band since her late teens.

In 2015, the mother-of-four shared an epic throwback of herself posing as Victoria Beckham a.k.a Posh Spice, as she dressed up as the group in high school.

‘I’m so Thankful that me & my friends were the Spice Girls for our high school talent show!,’ Kim wrote, adding: ‘The Spice Girls got me through a lot!’ she wrote on Twitter. 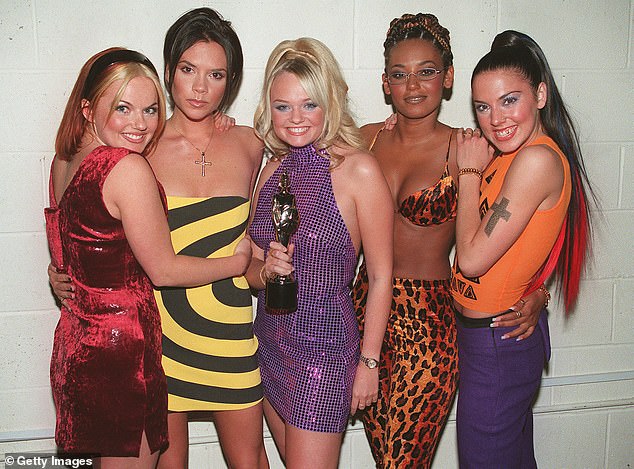 Too Much? The reality star was clearly feeling a resemblance between herself, Kourtney, 41, Khloe, 36, Kendall, 24, and Kylie, 22, and the fab five girls from the group (above in 1995)

Viva Forever: Meanwhile in 2012, Kim jumped on Twitter to reveal the band were her ‘obsession’ as the played at the London Stadium for the Olympics closing ceremony 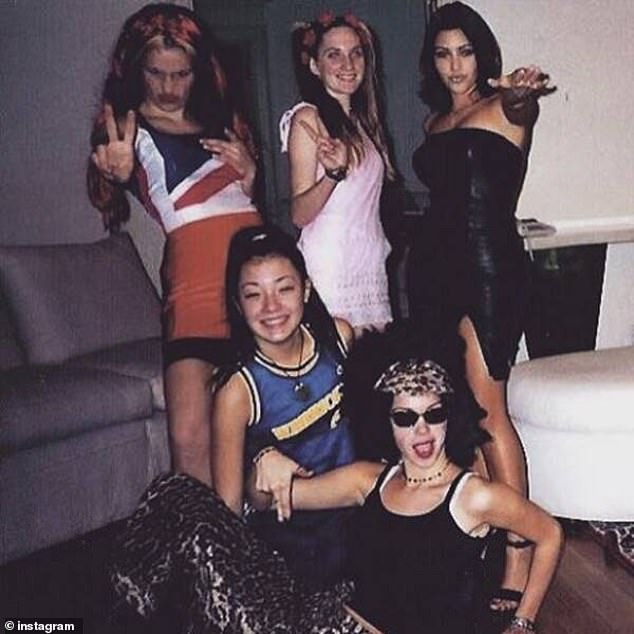 Say You’ll Be Her: In 2015, Kim shared this throwback of herself dressed as Victoria Beckham aka Posh Spice, while her friends dressed as the Spice Girls in high school

Stop: In 2015, Victoria Beckham responded to Kim’s impression of her calling it ‘genius’ 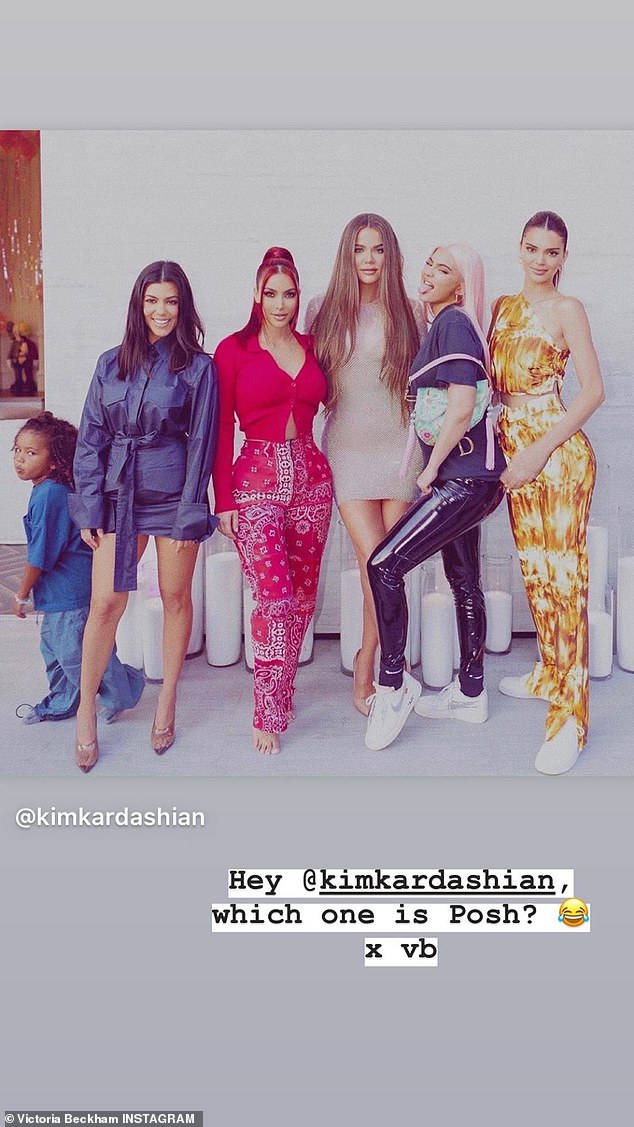 Who Do You Think You Are? Victoria  Beckham was quick to respond to the pic asking which one of them was meant to be Posh Spice

Victoria gave Kim’s impression her seal of approval in 2015, simply writing ‘Genius!’ after sharing it to her own Instagram page.

Mel B, who has rubbed shoulders with Kim a number of times, also gave her reaction to the snap years later, saying: ‘I love her! It’s funny.’

Earlier in 2012, Kim revealed herself to be a huge fan of the band when she got excited watching them play the closing night at the Olympics. Kim tweeted during their performance: ‘OMG the Spice Girls!!!! My obsession!’