Love & Hiphop's Apple Watts: I Was Tricked Into Relationship By A Trans-Man!!

Kim Kardashian takes no days off when it comes to promoting her extensive business ventures.

Valentine’s Day being no exception, the 40-year-old Keeping Up With The Kardashians star shared another snap from her SKIMS lingerie shoot on Sunday as she posed with a pink rose.

Flaunting her famous curves in an intimate nude-colored set she continued to promote her sale; perhaps a way to keep her mind off not having husband Kanye West as her Valentine this year.

Coming up roses: Kim Kardashian, 40, continues to promote her sexy lingerie SKIMS line as she bares her famous curves in a nude set she says is ‘so comfortable, you’ll feel naked’ while holding a pink rose

Kim looked every inch the sensual goddess as she posed in the lingerie she said was ‘so comfortable, you’ll feel naked.’

Her signature brown tresses down with a smokey eye, she flashed her festive red nails for the solo snap – her wedding ring noticeably not present.

Previously enlisting help from her super famous half-sisters Kendall and Kylie Jenner to promote the line, she dubbed it their ‘sexiest’ collection yet.

She filled the shoot with sweet treats for a fantasy-touch, as she licked whipped cream off her stomach that spelled out ‘SKIMS’ and played with cake frosting. 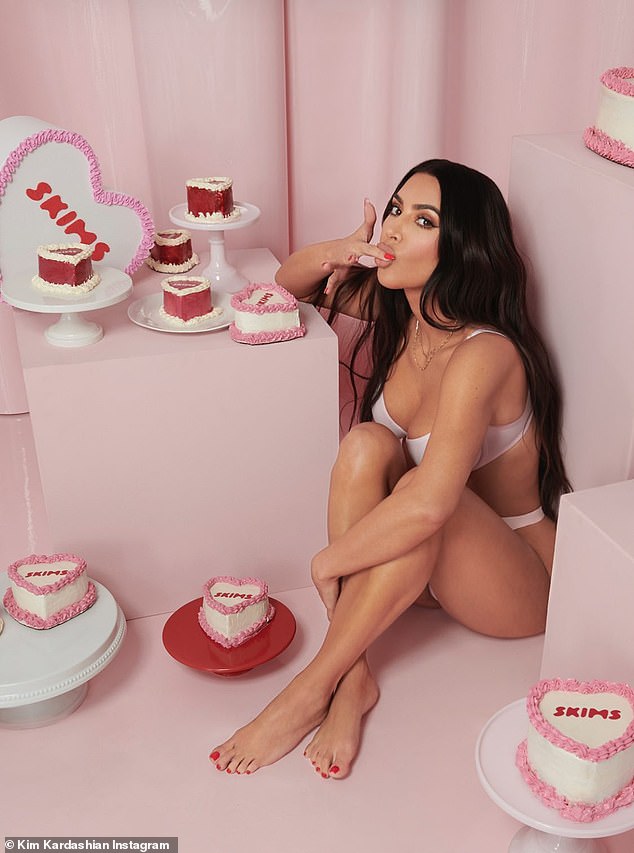 Sweet treats: The sexy shoot featured loads of sugary desserts as Kim licked whipped cream off her stomach and played with frosting 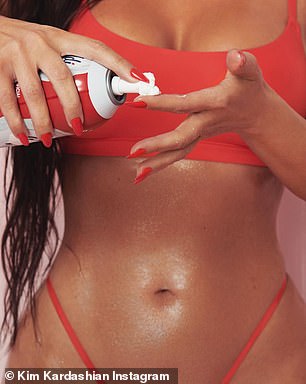 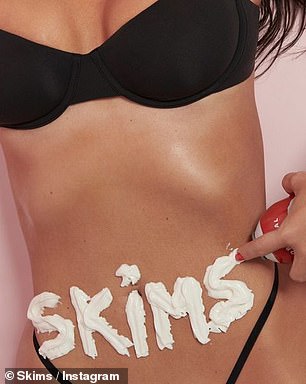 Famous curves: The reality star treated her fans to a close up of her famous curves as she was oiled up on set while wearing a red G-string 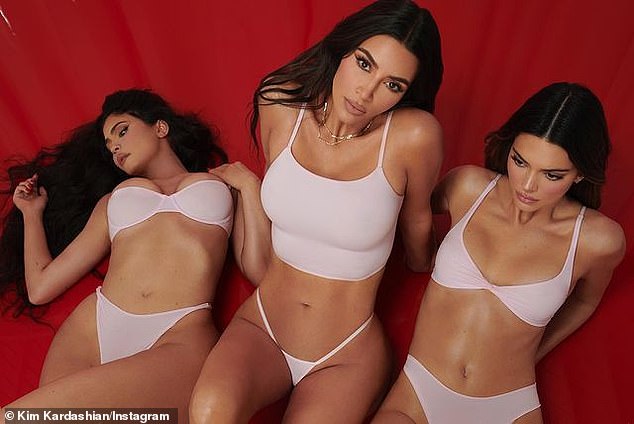 Sexiest shoot: She enlisted the help of super famous half-sisters Kendall and Kylie as they showed off the versatility of her SKIMS lingerie

Preferring only select areas of her life to be a little messy, to Kim’s chagrin her love life has taken a turn in a major way.

A far cry away from her anniversary post to West in May that she captioned ‘6 years down; forever to go. Until the end,’ news broke in early January that the couple was in the midst of a marital crisis after seven years together.

With ‘divorce being imminent,’ a source told People that she definitely will not be seeing him for the romantic holiday and is instead focusing on her kids.

‘She has a Valentine’s Day celebration planned with her kids and family. She likes to make it special for the kids. She doesn’t have any contact with Kanye.’ 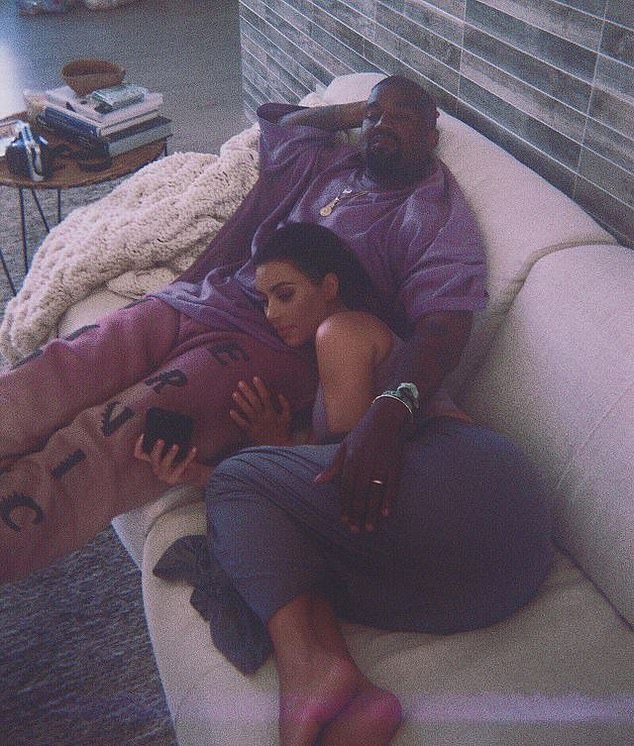 Single: In the past West has gone overboard on Valentine’s Day even hiring saxophone legend Kenny G; pictured 2019 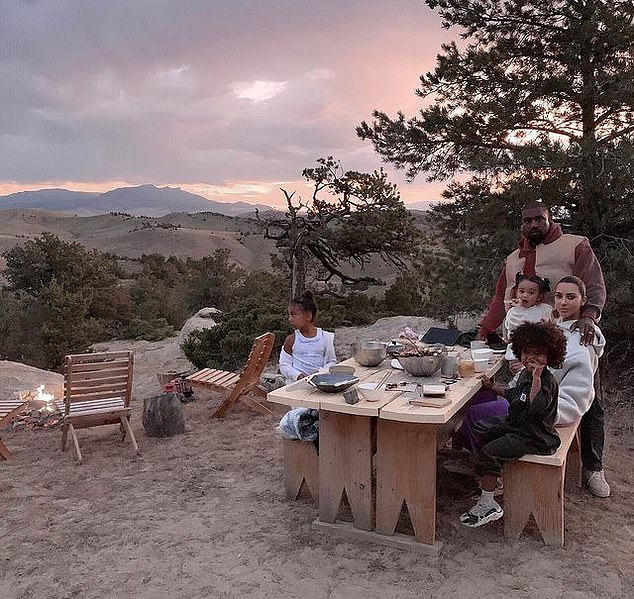 For the kids: Kim reportedly has her eyes on the ‘future’ and wants to make sure her kids lives’ are top priority; pictured 2019 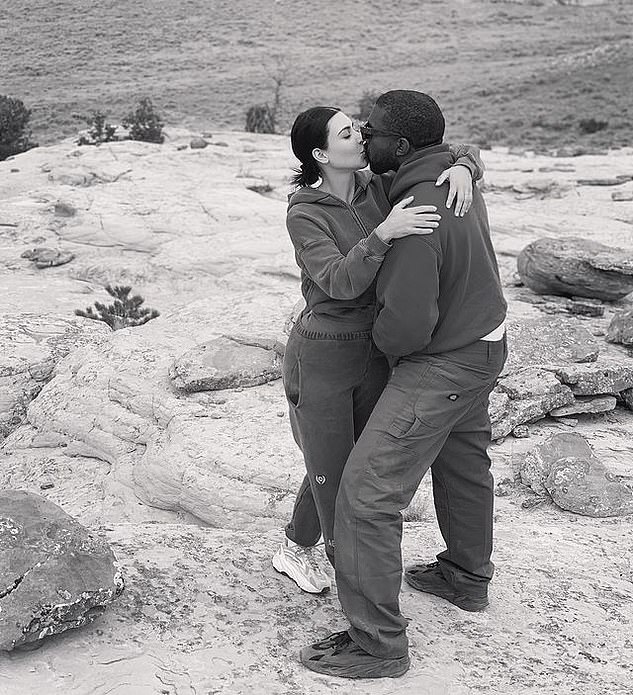 On the outs: ‘She has a Valentine’s Day celebration planned with her kids and family…she doesn’t have any contact with Kanye,’ a source told People; pictured 2019

In the past the rapper had gone above and beyond to shower Kim with love, including getting famed saxophone player Kenny G to serenade her in 2019 surrounded by an ungodly amount of roses.

The two have been leading separate lives for the past couple of months, Kim even grappling with their relationship as far back as July, when she met with divorce attorney Laura Wasser for the first time.

Fast forward to recent weeks Kardashian reportedly ‘has a divorce plan in place’ and a ‘fair’ way to split up their shared assets, as it has been noted that she ‘will file when she is ready.’

It has been said that she has her eyes ‘on the future,’ with her kids lives’ being top priority, and she has been seen frequently without her wedding ring. 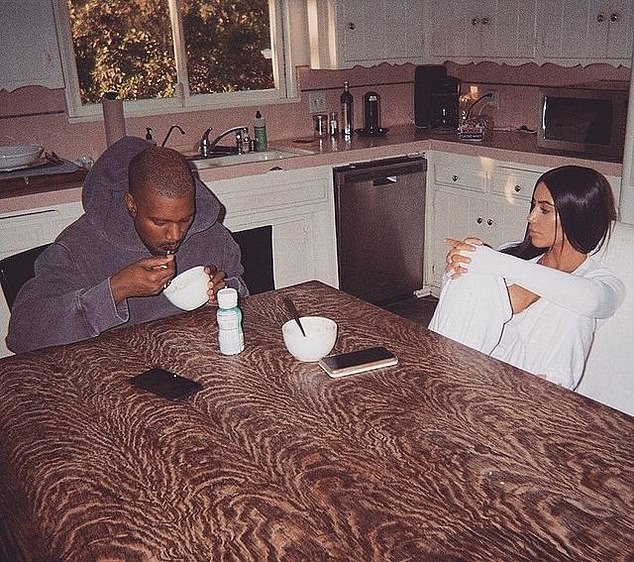 Over it: News of the pairs impending divorce began swirling in January as it has been said Kim is ‘over it’; pictured 2019